MEET ME IN THE BAR CAR 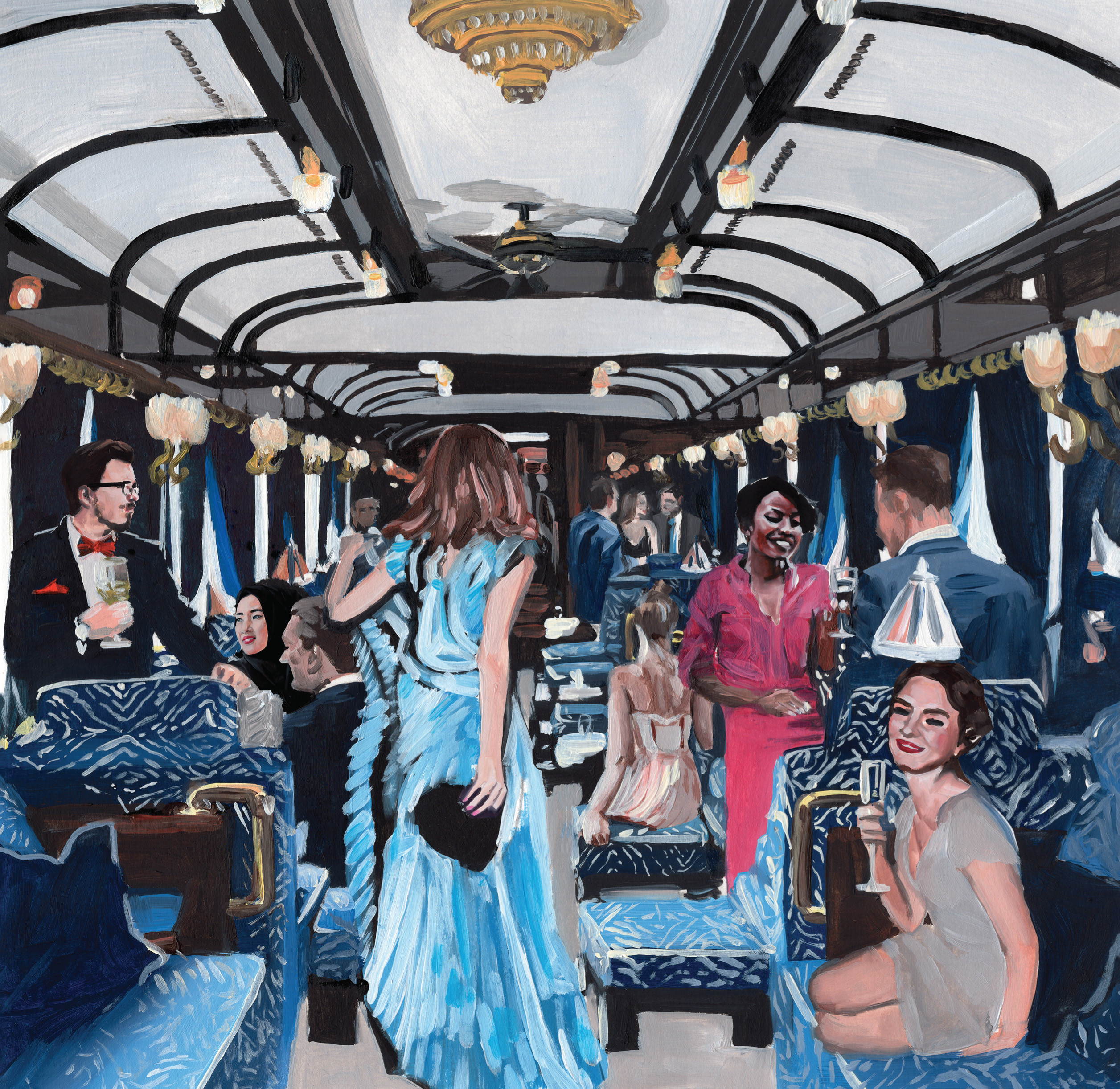 THE DIN OF Venice’s Santa Lucia station surrounded me as I clung to a card with my cabin assignment: D8. Amid the faint aroma of espresso mixed with exhaust, I looked at the other passengers on the platform. A man in a trench coat chatted loudly to his wife, whose waist was cinched by a giant Gucci belt. A woman wearing a fur stole and heels moved to take her photo with the six staff members who had lined up to welcome us.

They smiled in their uniforms, styled straight out of the Golden Age of Travel: The chef in a white toque and double-breasted top; a steward in a royal blue jacket, trousers, and cap, all trimmed with gold piping. A man in a crisp white tuxedo jacket looked like he belonged in a speakeasy; another wore a bow tie and tails. I smoothed my dress, adjusted the brim of my hat, and stood up straighter. I spotted my car a few doors over and made my way toward a freckled young steward, who introduced himself as Rory. “Welcome to the Venice Simplon-Orient-Express,” he said, as he stretched out a white-gloved hand. I took it, feeling every inch the ingenue, and climbed aboard. 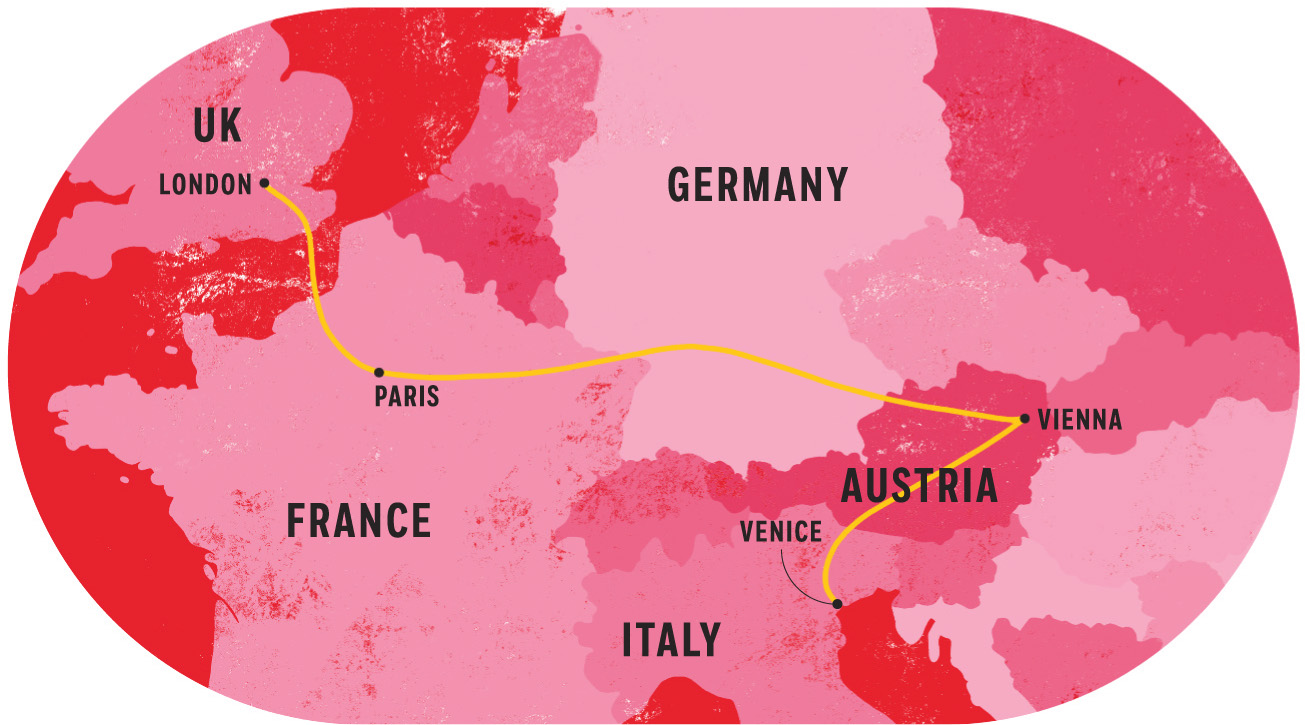 “Wow,” was all I could say when Rory opened the door to my cabin and offered me a glass of sparkling wine. As I sipped, I took in the details of the room, originally built in 1929: wood paneling so polished I could see my reflection; a washbasin hidden in a cabinet; a large window that invited gazing at the passing landscape. Though I knew Agatha Christie hadn’t ridden on this particular train, I could picture one like it inspiring her to write Murder on the Orient Express.

The last couple times I’d traipsed around Europe, I’d been in my 20s, bouncing between friends’ sofas and hostel dormitories. I traveled by bus or Ryanair, definitely not in an elegantly restored early 20th-century train car with art deco details. Back then, every day was a fresh start, every common room an opportunity to make new—albeit temporary—friends. Starting conversations felt easy. “Where are you coming from?” could blossom into late-night political discussions over cheap beer. Strangers I met at breakfast in a shared kitchen in Prague became companions for a day of gallivanting. We didn’t need to know each other’s last names; more important was a shared openness, saying yes to the world.

Now I was in my 30s, on my second glass of prosecco aboard a sumptuous train that was pulling away from the station and picking up speed on its way to Vienna. From my seat I spied some of the highway drivers admiring my ride. Emboldened by the glamour (and probably the bubbly), I waved.

After a dinner of sea bass and sautéed duck, I teetered to the bar car, trying to stay upright on my high heels as the train hurtled along the tracks. Everyone was dressed to the nines: One woman wore a 1920s headpiece, the men were in suits and tuxedos. Cocktail servers weaved between banquettes taking orders and delivering snacks. Over the chatter, a pianist maneuvered from an ABBA song to “Bésame Mucho.” I ordered a drink and found a seat near a few women I recognized from dinner. The youngest, who looked to be around my age, was wearing a floor-length ball gown. She scooted over to make room for me, and I raised my martini glass in salute. “Where are you guys from?” I asked.

Mickey was a denim designer in Los Angeles, and her mother, Sharon, also seated nearby, had retired to the Carolinas, but both were originally from Texas. They had been planning the trip for almost a year. They would be disembarking in Budapest, the train’s second stop, Mickey told me, and were looking forward to wandering the market there or maybe going to the city’s famous baths. When Mickey and Sharon went to bed, I moved closer to the pianist, who was still going strong. The trench coat man and his Gucci-belt wife appeared. “Let’s have some Elvis!” he exclaimed. “A little rock and roll!” “Chattanooga Choo Choo!” she slurred, shaking her hips next to the baby grand. As they danced, I talked to Jo, a die-hard Agatha Christie fan. “I got emotional when I saw the train pull up,” she confessed. Around 11:30 I returned to my cabin, where the daybed had been converted to a twin-size bed. I fell asleep to the ca-thunk, ca-thunk of the locomotive barreling through the night.

The next morning I disembarked in Vienna. While checking in to the Grand Ferdinand Hotel, I ran into Val and Steven, whom I’d met the day before on the train. Steven wanted to try Vienna’s famous Sachertorte, so we set out for lunch. After getting a little turned around, we found ourselves at Hotel Sacher eating goulash, cabbage with noodles, and the chocolaty, jammy cake the hotel is known for. Val and Steven regaled me with tales from their travels. Steven’s job organizing conferences had taken them from their home in a village outside London all over the world. They were also doting grandparents. “We’re very lucky,” Steven said a couple times as they told me about their lives. I licked the last crumbs from my fork, looked out the window at the blue spring sky, and then around the table at my companions. I felt pretty lucky, too.

After two days in Vienna exploring art in the MuseumsQuartier, it was time for our last night aboard. When I arrived in the bar car, it was mostly empty. “Another martini for Signora Bond,” said the waiter as he brought me my drink. Val and Steven came in and I waved them over; a pair of Greek Australians settled in with us, and then some Londoners, too.

We talked, ate a four-course dinner, and, suddenly, it was midnight. A dozen or so other stalwarts and I weren’t ready to call it a night just yet. The familiar first chords of “Unforgettable” streamed out, and one of my new train friends, an American woman on the trip with her former roommate, stood next to the piano and started to sing.“Unforgettable, that’s what you are.” Her buddy joined in. “Unforgettable, though near or far….” They realized neither knew the rest of the words and trailed off into laughter. Next to me, Mickey cheered. The pianist got up for his break, but the vibe had been set: This was a sing-along. A woman played “Don’t Stop Me Now” by Queen on her phone and sang into a bar spoon. We joined in, and when she sat down and exclaimed, “What else would I want to do on the Orient-Express?!” a sense of déjà vu hit me.

“WE TALKED, ATE A FOUR-COURSE DINNER, AND, SUDDENLY, I T WAS MIDNIGHT. A DOZEN OR SO OTHER STALWARTS AND I WEREN’ T READY TO CALL IT A NIGHT JUST YET.”

I had been on a trip like this before. Many times, actually. It was the kind of travel where, by sharing close quarters and new-to-us places, I’d gotten to know fellow travelers. We had commiserated over quirks of the journey (like the difficulties of applying makeup on a moving train). We had become entwined in each other’s travel memories even though we’d known each other only a day or two. The only difference was that we were camouflaged in formal wear. The pianist came back and started to play again. At the first notes of “New York, New York,” a wave of recognition rippled through us. The train rumbled on. We began to sing.

HOW TO DO THIS TRIP

Assistant editor Sara Button rode the Venice Simplon-Orient-Express as a guest of Belmond on their Venice-Vienna-London itinerary. From March to November, Belmond offers trips on the historic train, which holds 173 passengers. The signature route is an overnight ride between London and Venice, with a brief stop in Paris, but other itineraries take travelers from London to Berlin, Venice, Prague, and other cities. For the ultimate rail adventure, book a 10-night round-trip journey from Paris to Istanbul. Onboard, passengers enjoy four-course dinners and, depending on the itinerary, three-course brunches, continental breakfasts, and afternoon teas. A resident pianist plays in the bar car, which only closes when the last patron leaves. From $2,425. belmond.com ■