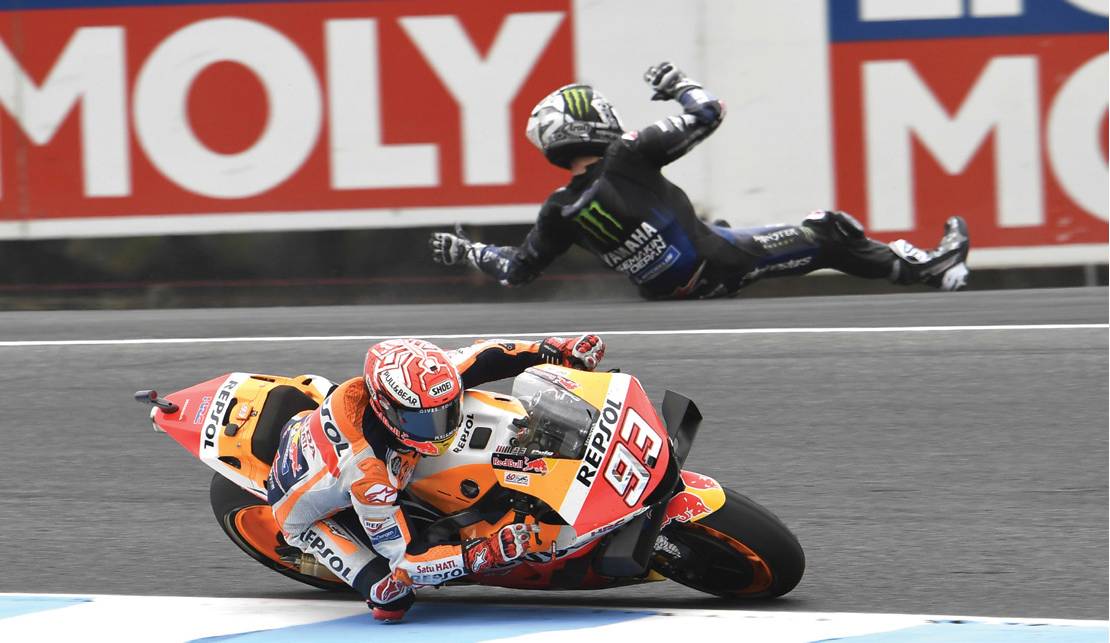 FOR A THIRD time in the last five races, the crowned 2019 champion Marc Marquez waited until the start of the final lap to pounce. This time the victim was Maverick Viñales, and by the end of the lap, the Monster Yamaha rider wasn’t there any longer.

Trying desperately to regain the lead he’d held for most of the race, his rear grip gone, Viñales had one last chance to attack the Repsol Honda – under braking for the Turn 10 hairpin. But he never made it. In the change of direction over the preceding Lukey Heights, the rear tyre let go and he was down and out.

The lack of mercy showed also when Marquez passed early leader Cal Crutchlow (LCR Castrol Honda) for second behind Viñales – so close that he almost removed the British rider’s glove!

“I was pushing it back on all down the straight,” said Crutchlow. Marquez’s fifth win in a row was his 11th this year and the 55th in his career – putting him one ahead of Mick Doohan as the most successful Honda rider.

The strategy, he said, was the same that he had employed to defeat Fabio Quartararo at Misano and in Thailand, “but this time the difference was bigger.

“When I passed Cal it was on the limit… but it was important. I couldn’t afford to let Maverick get away. He was faster than me, and the hard part of the race was when he pushed for five or six laps; but I knew if I could stay with him then I would have a chance. I took a gamble on the soft rear tyre, and at the end it was finished, but Maverick had the same.

“Sometimes the faster rider doesn’t win the race. It was like that today.”

Viñales’s crash, with three corners to go, handed a fine second to Crutchlow at the track where a year ago he suffered potentially career-ending leg injuries; and a home-hero podium third to Jack Miller, who had carefully tended his tyres, then manoeuvred his Pramac Ducati to the front of a huge gang disputing the position.

“I knew I had the pace for the podium whatever happened,” he said, adding: “In the last few laps, my rear tyre was destroyed.”

Miller had thought he could do no better than fourth, having saved his tyres in the battle to take narrow control at the end.

“As I came over Lukey Heights I saw dust – then I saw it was Maverick, and I knew I would be on the podium.” 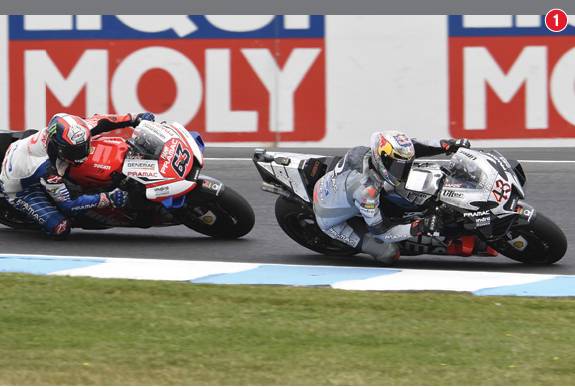 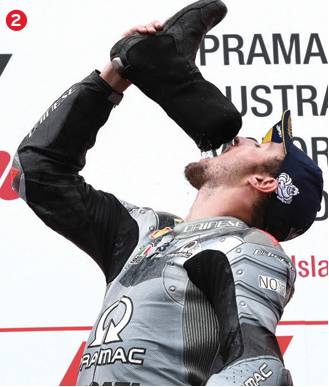 2. We know you finished third Jack but... ick 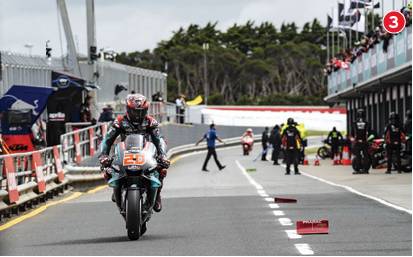 3. After an FP1 crash Fabio Quartararo had to go out in Q1 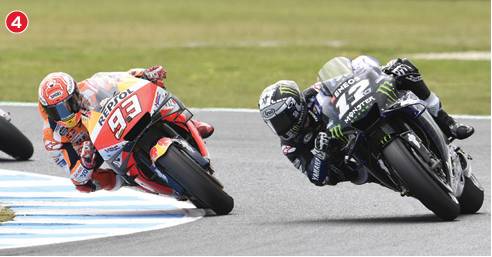 4. Most of the weekend the #12 Monster Yamaha M1 looked like the fastest bike at PI 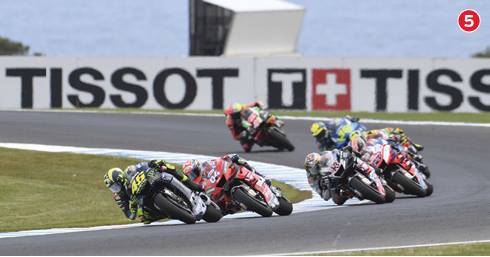 5. Valentino Rossi led early before the pack swallowed him up 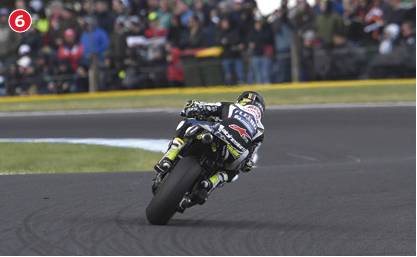 He had ridden with impressively mature judgement, at odds with the wild-man Ned Kelly tribute ahead of Quartararo and Marquez), there was a final twist – spots of rain spattered down at the end… luckily too late to make any difference.

With everybody short of set-up time, there was some second-guessing on tyres on the grid, while in the pits wet-shod bikes were ready in case of a flag-to-flag bike-swap race. According to Michelin’s tyre sheet (admittedly not necessarily correct), only Johann Zarco (substituting for Nakagami on the LCR Idemitsu Honda) chose the soft front; only Marquez and Crutchlow the hard. For the rear, however, Viñales, both leathers he’d adopted for the race. “I tried not to do what I’ve done before – to lead then drop back. I waited, and then I could see the guys gradually coming back to me.” 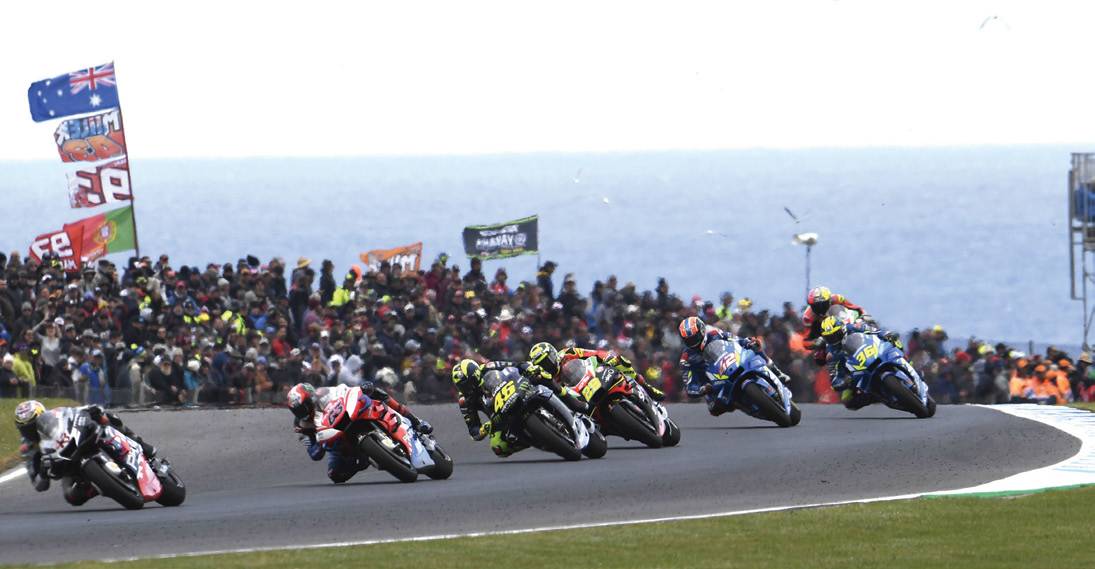 “I tried not to do what I’ve done before. I waited, and then I could see the guys gradually coming back to me”

Third to 10th was covered by just over two seconds, with jostling position changes throughout the race, and the two usually downbeat Aprilias having by far their best race of the year, at a track where rhythm and handling mean more than acceleration and power.

After a weekend of disruptive weather that postponed qualifying from Saturday to Sunday (Viñales Aprilia riders Iannone and Espargaro, Rossi and Marquez joined Zarco in gambling on the soft, the rest all on hard.

Said Miller: “I watched the guys switching to the soft, and I thought either they had much better throttle control than me, or they’re expecting rain – for me it had no endurance.” This decision paid him back.

Valentino Rossi (Monster Yamaha) celebrated his record 400th race with a tearing start, seizing the lead with a run round the outside into the daunting first corner, and holding it for the first three laps.

Into the second corner, Danilo Petrucci was pushed wide and his Ducati flicked him off hard and high. Outside of him, Quartararo had already run wide and slowed. The inverted rider went piling into the side of the Petronas Yamaha, and both were down and out. 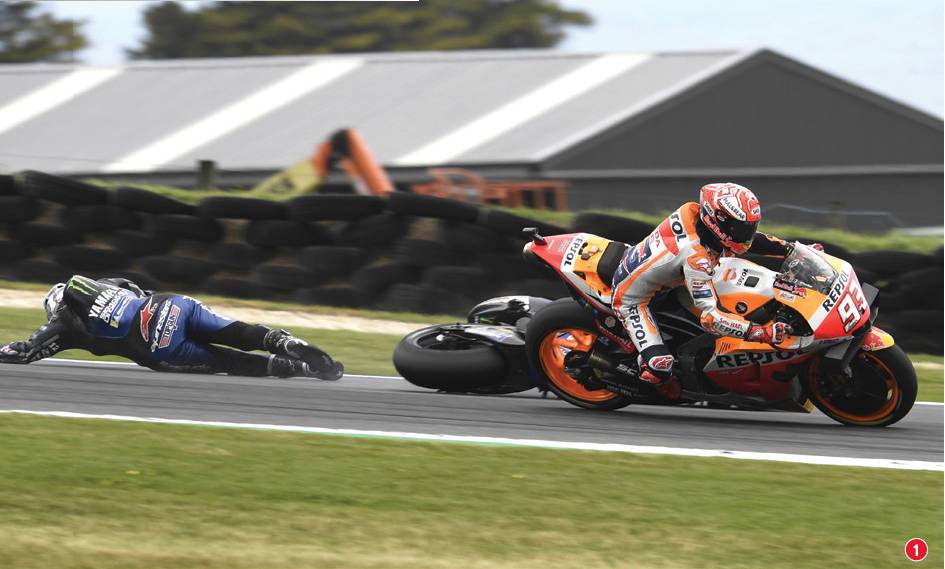 1. Marquez was quite fortunate not to be be hit by the spinning Viñales Yamaha 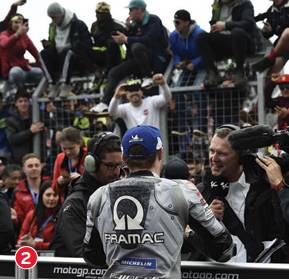 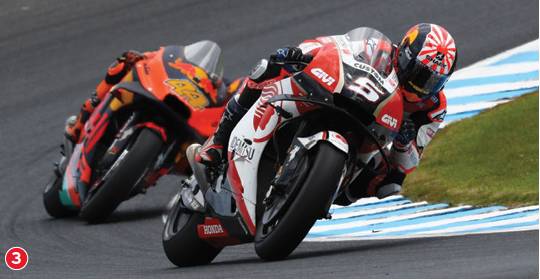 3. Johan Zarco settled onto the Honda and eventually lost the battle for P12 to former KTM teammate Pol Espargaro

It was Crutchlow first chasing Rossi, and – to the amazement even of his Aprilia team – also Andrea Iannone, an impressive run he would sustain. Crutchlow took the lead for six laps as Rossi faded. But Viñales was moving up from sixth on lap one, and he firmly outbraked Crutchlow at Turn Four hairpin on lap 10. Marquez followed him through, violently, three corners later, and the pair took off.

Crutchlow would likewise be alone to the finish.

A second or so behind him there was a brawl more resembling undignified Moto3 than MotoGP, riders see-sawing up and down the order. Alex Rins was the first to lead Iannone over the line, shortly before half distance, but the Ecstar Suzuki rider wouldn’t stay there for long. Next to lead the gang was Rossi again, on lap 14.

At this point, fourth to 11th was covered by less than two seconds while Andrea Dovizioso (Ducati Corse) was leading the private Pramac Ducatis of Miller and Pecco Bagnaia forward.

It would all change several times. Rookie Bagnaia led the group from laps 20 to 23; Dovi was pushed wide at the hairpin on the last lap.

Miller did it all best then Bagnaia and Joan Mir (Ecstar Suzuki), fourth and fifth the best yet for both class rookies. Iannone was sixth (his best Aprilia finish), then Dovi, Rossi, Rins and Aleix Espargaro (Aprilia), third to 10th still inside two seconds.

Franco Morbidelli (Petronas Yamaha) was a distant 11th, then Pol Espargaro, who salvaged KTM’s honour by a tenth of a second over former Red Bull KTM teammate Zarco, who had an impressive first Honda ride.

SAVE OF THE WEEKEND

Marc Marquez seemed to have taken it with an amazing comeback from a record 70.8 degree lean angle on Friday; but Moto2’s

Dominique Aegerter outranked him – almost kissing the front fender in a high-side, but then getting it all back.

STAR OF THE WEEKEND

Maybe repetitive, but Jack Miller really showed how much he has grown as a rider with his tyre-saving ride, staying calm and beating everyone he was close enough to catch. He’s really getting good at it. 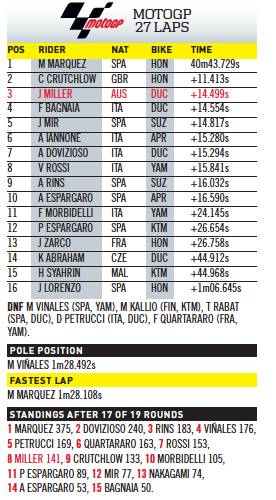