THE QUEST FOR THE BEST 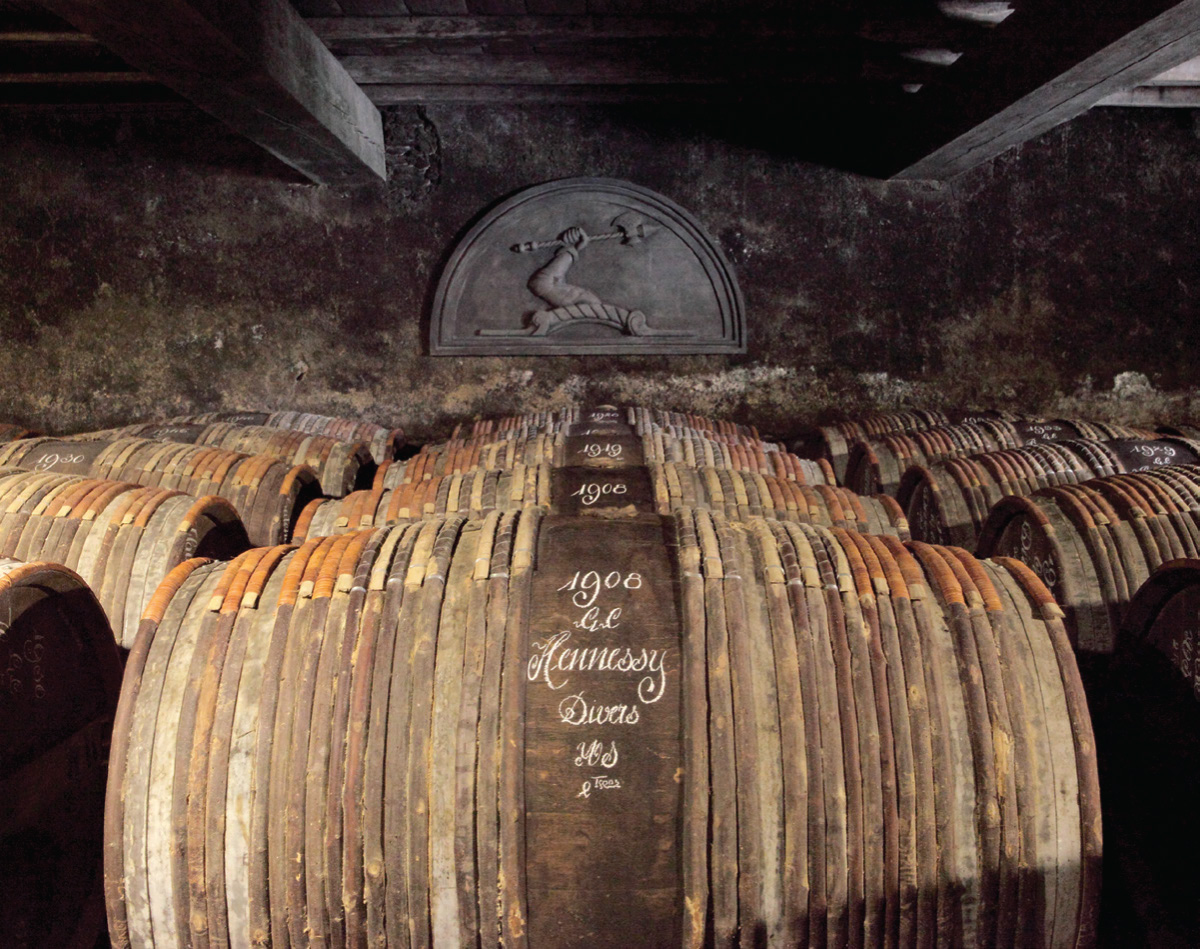 The Chai du Fondateur (founder’s cellar) at Hennessy, where ancient casks of eaux de vie patiently await their turn to be blended into superior Cognac.

This beyond XO Camus has been popular in Asia for years, but it didn’t reach the United States market until earlier in this decade. While it contains eaux de vie from Cognac’s Grande and Petite Champagne regions, it also has wine grown in the Borderies cru, keeping up the Camus tradition of championing Cognac’s smallest region. A spicy nose, with nutmeg, ginger and cinnamon, welcomes sweet cherry and raisin bread on the palate. Cinnamon lingers on the long finish.

Hardy is known to be the height of expense in Cognac, and the above price may have you gasping already. But built into the tariff is the spectacular Lalique crystal vessel that the firm creates for its seasonal releases, limited to a mere 400 bottles. We tasted the spring (Le Printemps) and summer (L’Été) versions, and were left champing at the bit in expectation of fall (L’Automne). The latter of the two presents a nose of cinnamon and sugar toast with a hint of perfume. In the mouth, it melts out serious hard candy notes with orange, cherry and mango. The long finish brings on sweet licorice.

This is an even more elevated version of the Cognac first introduced as Paradis, and already a superb liquid at $900 (can that price be described as entry level?). Despite achieving what some might term perfection, Hennessy dug deeper into its stocks (the paradis) to unearth this gem in 2014. From nose to final nip it unleashes a flow of flavors that never give in, starting with a bouquet of flowers, dried fruit and citrus, toffee and vanilla. On the palate are tangerine, crème brûlée, caramel, anise and passion fruit as well as woodiness. A forever finish.

L’Artisan is one of the brilliant finds of Nicholas Palazzi of PM spirits, who makes it his business to find casks that might otherwise go unnoticed in the cellars of France. His range spreads beyond Cognac to Armagnac, as well as the apple brandy of northern France, called Calvados. This example was distilled in 1950 from a single cask culled from the Grande Champagne cru of Cognac, and was bottled unfiltered and uncut. It’s not a blend, yet it screams with complexity while remaining elegant. You’ll find notes of rich berries, ginger, orange, flowers, cocoa and hard candy

Hip-hop artists may have put their stamp on the Courvoisier brand with the line “Pass the Courvoisier,” but this extremely high-end example of the brand is one you don’t dole out freely at parties. We recommend you hide it away, to contemplate in silence. Born as a limited release in 2009, L’Essence now occupies a regular place in the Courvoisier lineup. Melded from more than 100 eaux de vie from Grande Champagne and Borderies, this Cognac delivers honey, caramel, flowers, anise and cinnamon. The finish is extraordinarily long.

You’ve likely seen this majestic bottle glowing down from the very top shelf of toney bars. Although it was introduced in the late 19th century, the name honors the 17th-century king who first recognized Cognac as its own brandy region. A recent Black Pearl version (shown on first page) goes for $13,000 for a half bottle, but those who slum it with the $3,500 version still get an impossibly complex mix of flavors that include dried flowers, saffron, leather, nuts, mushrooms, honey, citrus fruits, nutmeg and ginger. There’s even a hint of cigar tobacco, which should pique your interest in pairing it with a fine cigar.

This single-estate Grand Champagne Cognac achieves its complexity by storing casks in a range of different conditions based on temperature and humidity. The name comes from the idea that what is left in the vessels after 30 to 50 years of evaporation—the lost liquid is known as the angel’s share—is what the spiritual attendants have selected for our enjoyment. It carries a finessed range of honey, fruit, spices and wood. Apples and pears meet slight citrus notes, and mingle with cigar tobacco, cedar and leather.

It was 1270 when the Frapins began growing grapes on a family estate, which includes its own castle. This limited-release, which was introduced in September, contains only grapes from the Grande Champagne region on which the property is located, as with all Frapin’s expressions. The container includes an 18-karat, rose-gold stopper. Along with candied fruits, licorice and cinnamon, it achieves a woodiness as the prized rancio. The latter brings mushrooms, mustiness and a cigar-box quality. ■