CALL OF THE MOUNTAINS 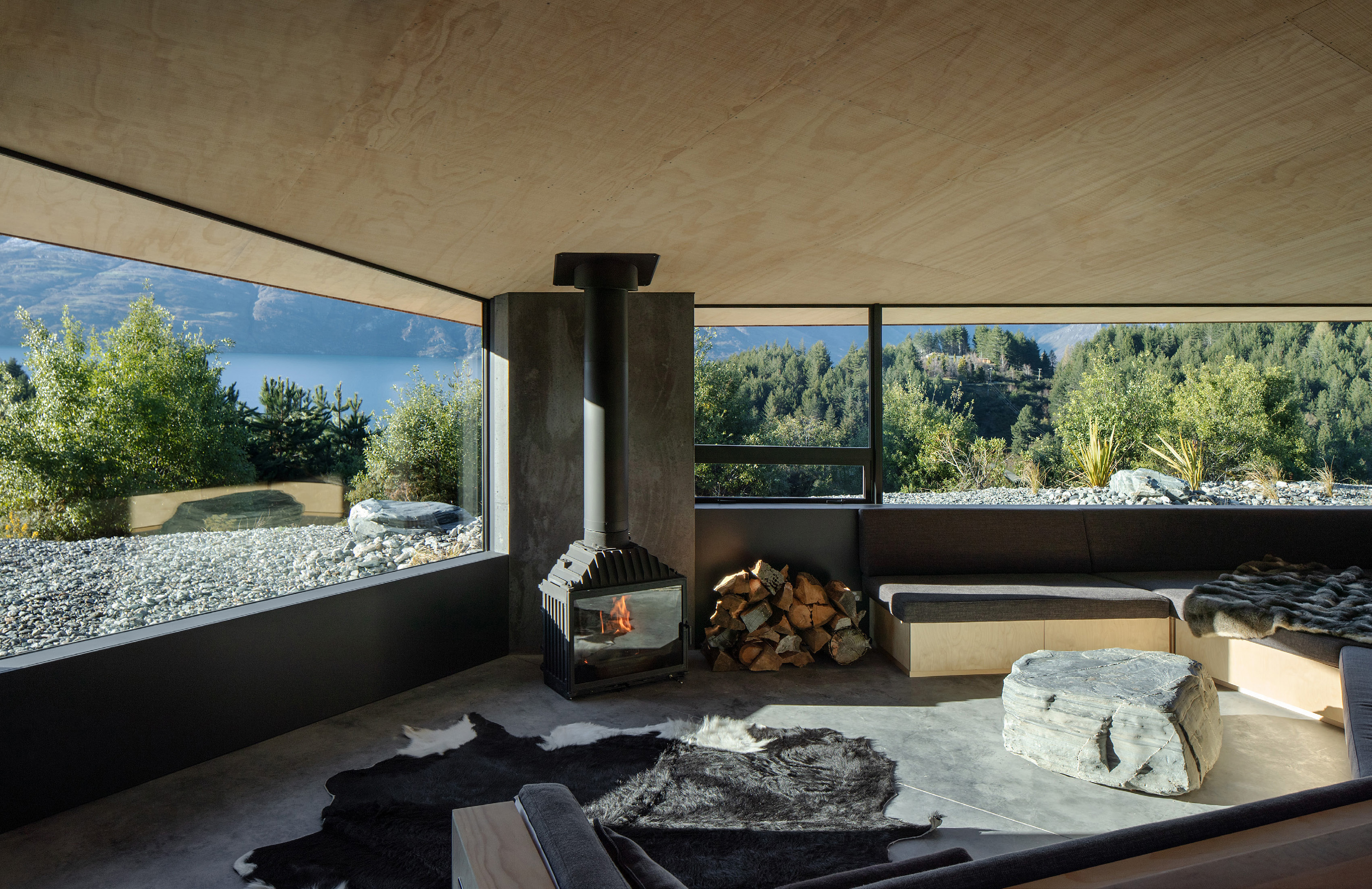 Living area The stunning view wraps around the entire room, which includes a built-in sofa designed by architect Vaughn McQuarrie and hide rugs adding comfort to the floors. The coffee table is a local stone recovered from the original build site 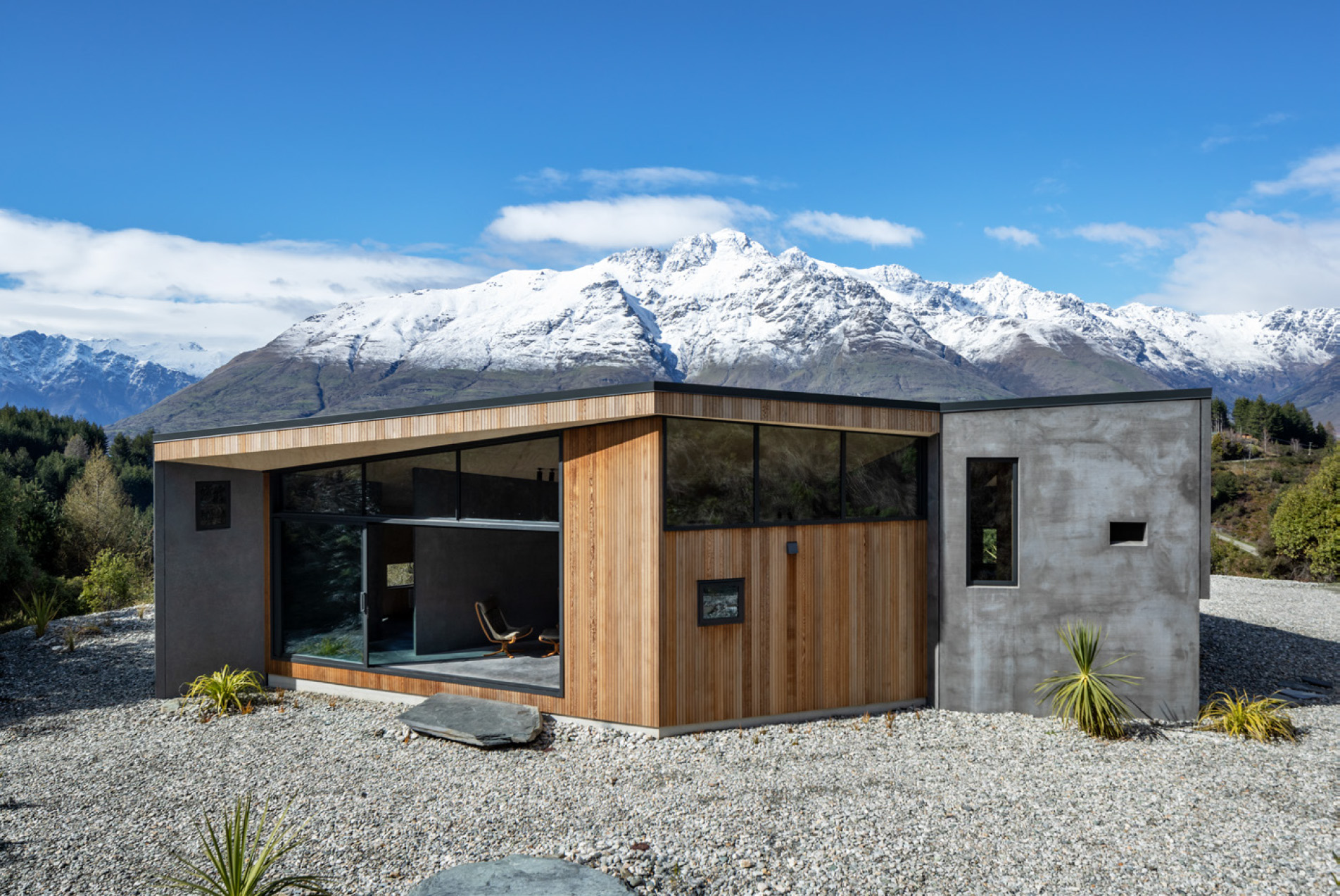 When I first met the clients for this project they were heading off on a 12-day bush bash, not following any walking trails and sleeping rough, using rocky outcrops for shelter,’ recalls architect Vaughn McQuarrie. Both from Australia, but living in different cities because of work, the couple were looking for somewhere to come together and share their combined passion for the outdoors.

There’s no better place to indulge that passion than on New Zealand’s picturesque South Island. In particular, this spot – just a 15-minute drive outside of Queenstown – is near Milford Sound, a fjord flanked by rainforests and waterfalls, and the peaceful Lake Wakatipu. It’s all set against the backdrop of the Southern Alps, the tallest peak of which is Mount Cook (or Aoraki in Maori), a renowned challenge for hikers and climbers.

Sitting high up above the lake, the plot of land the couple chose to build on had already been carved out of a steep incline. It’s not a starting point that Vaughn, who saw it as ‘a scar on the hillside’, would normally choose, but it’s one that inspired a very different type of home. Placing a wooden stake in the middle of the flat platform, he carried out a topographical survey to map the lines from the surrounding peaks, as well as the path of the winter sun. ‘The story I invented,’ he explains, ‘is that when the area was excavated there were some large rocks left behind.’ These imaginary boulders, shaped by his findings, now form the three fragments that slot together to form the house’s structure.

Crafted from concrete, this is a property that disappears into its surroundings, and the materials palette inside is unwaveringly true to the area. The dining table and bench are carved from a log of Southland beech found wedged between boulders in the nearby river, while a large piece of rock recovered from the build site now functions as a coffee table.

Views are also treated with the utmost reverence – there are no large glazed walls here to greedily soak up the landscape, but picture windows that offer carefully curated perspectives. ‘As you move through the house you see the landscape framed in different ways,’ says Vaughn. ‘In the bedroom, there’s a very low, long window that you can’t fully appreciate until you are lying in bed. This approach gives each space its own unique experience.’

During New Zealand’s brutal winters, it makes for a cosy retreat from the wild. ‘I call it “luxurious roughing-it”,’ says Vaughn. Sat in the sunken lounge, with its tactile rugs and wood-burning stove, staring at the snow on the opposite peaks, it seems like the perfect description. 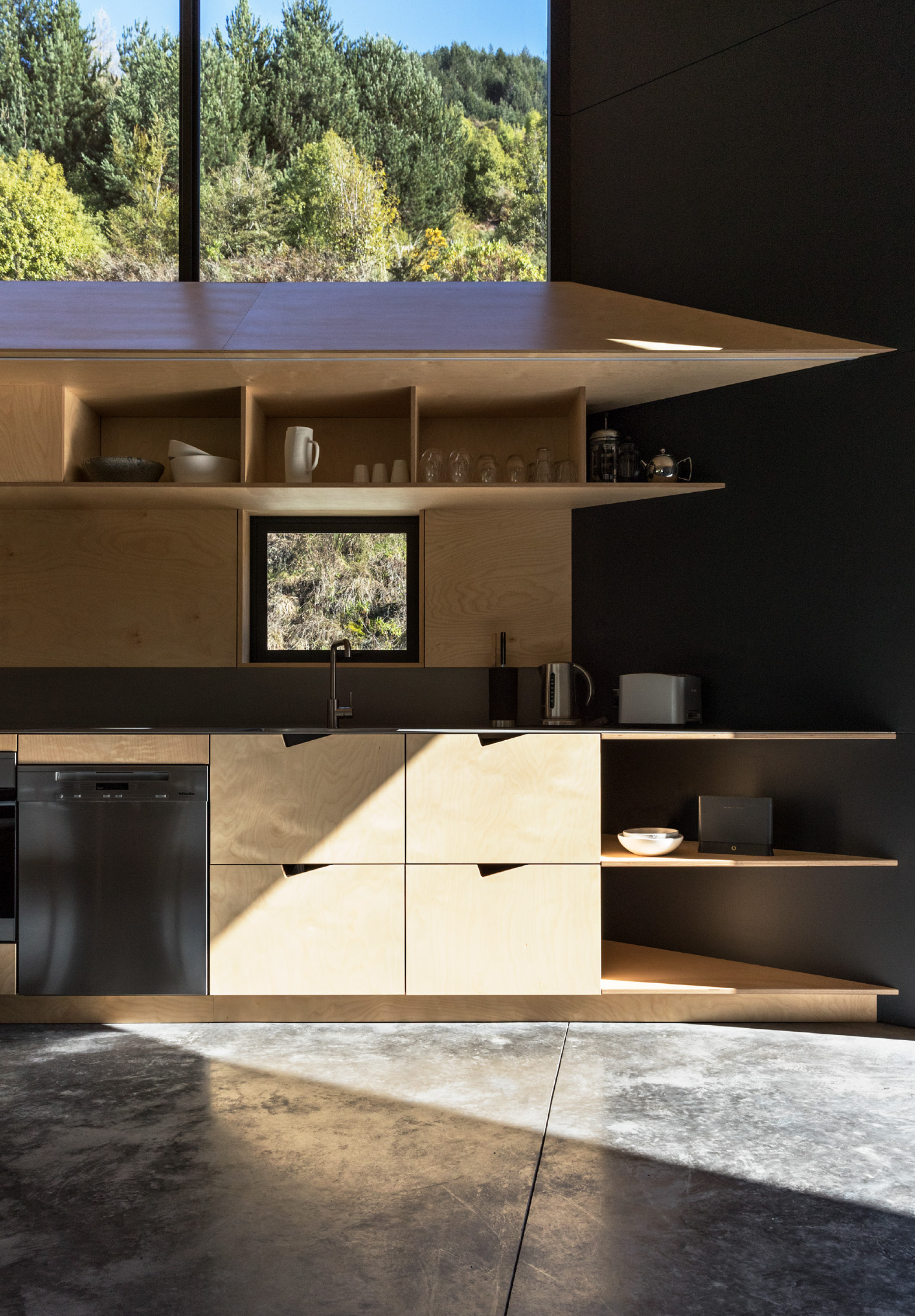 Kitchen Custom-made from plywood, this area sits at the rear of the open-plan living space. The long picture window above the top cabinets offers a unique view of the hillside behind, with the colours of the foliage complementing the wood 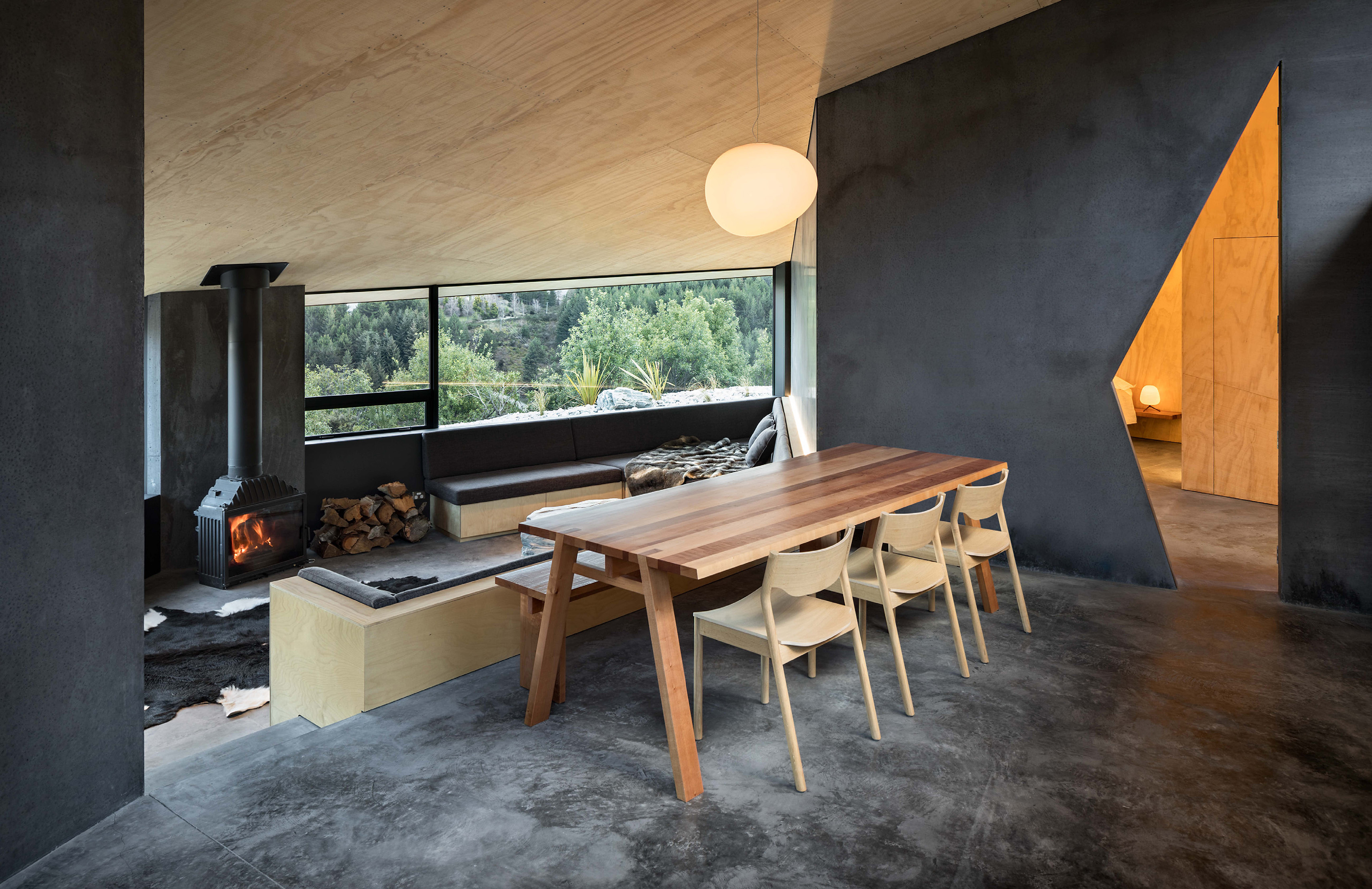 Dining area Crafted from Southland beech, the bespoke table is paired with ‘Tangerine’ chairs by Simon James for Resident – available at Twentytwentyone. Above it hangs a ‘Gregg’ pendant light by Ludovica and Roberto Palomba for Foscarini 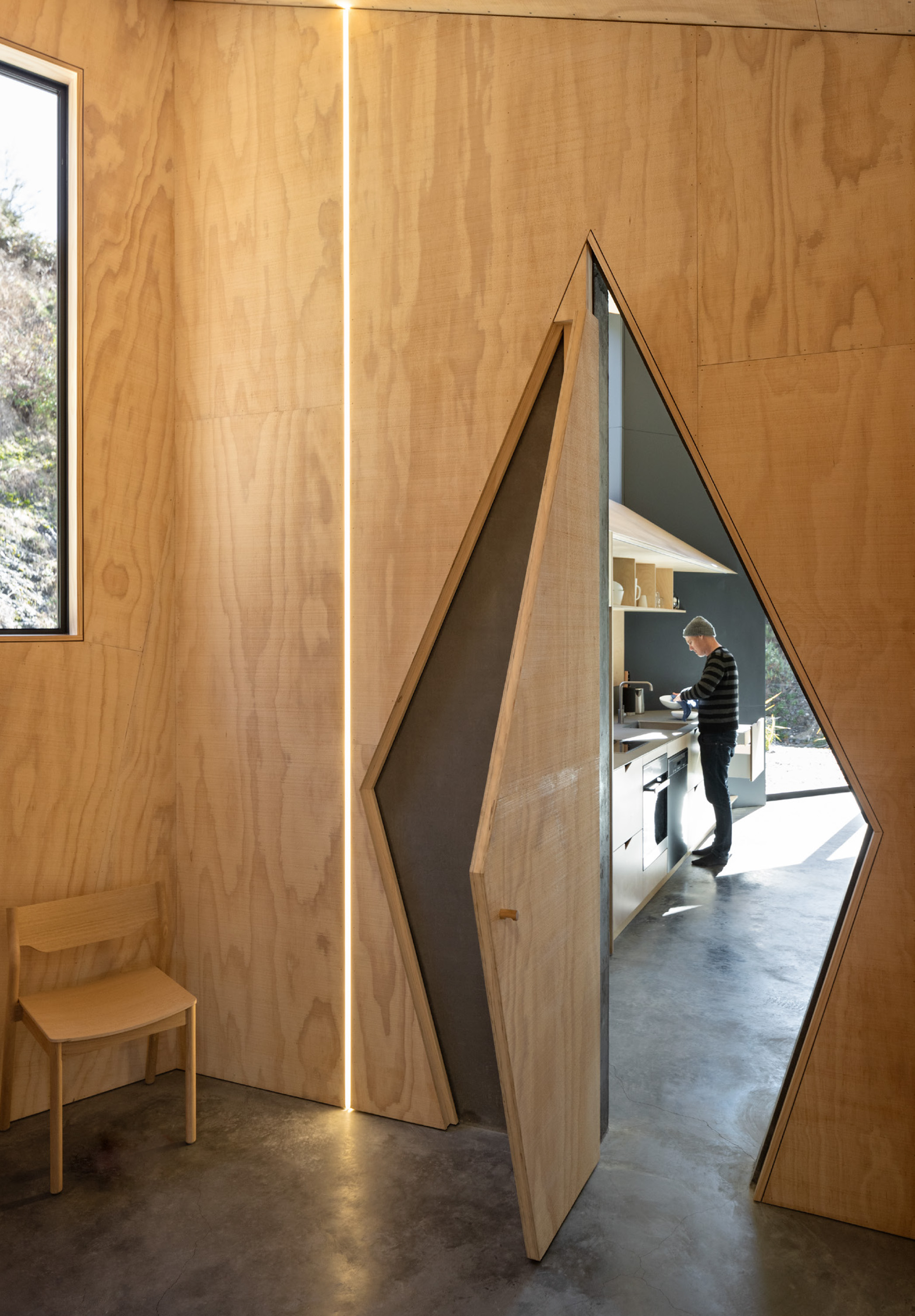 Architect Vaughn (pictured) used the lines from the surrounding peaks to steer the design of the building, bringing them inside, too, with angular plywood walls and doors, accentuated by linear lighting. 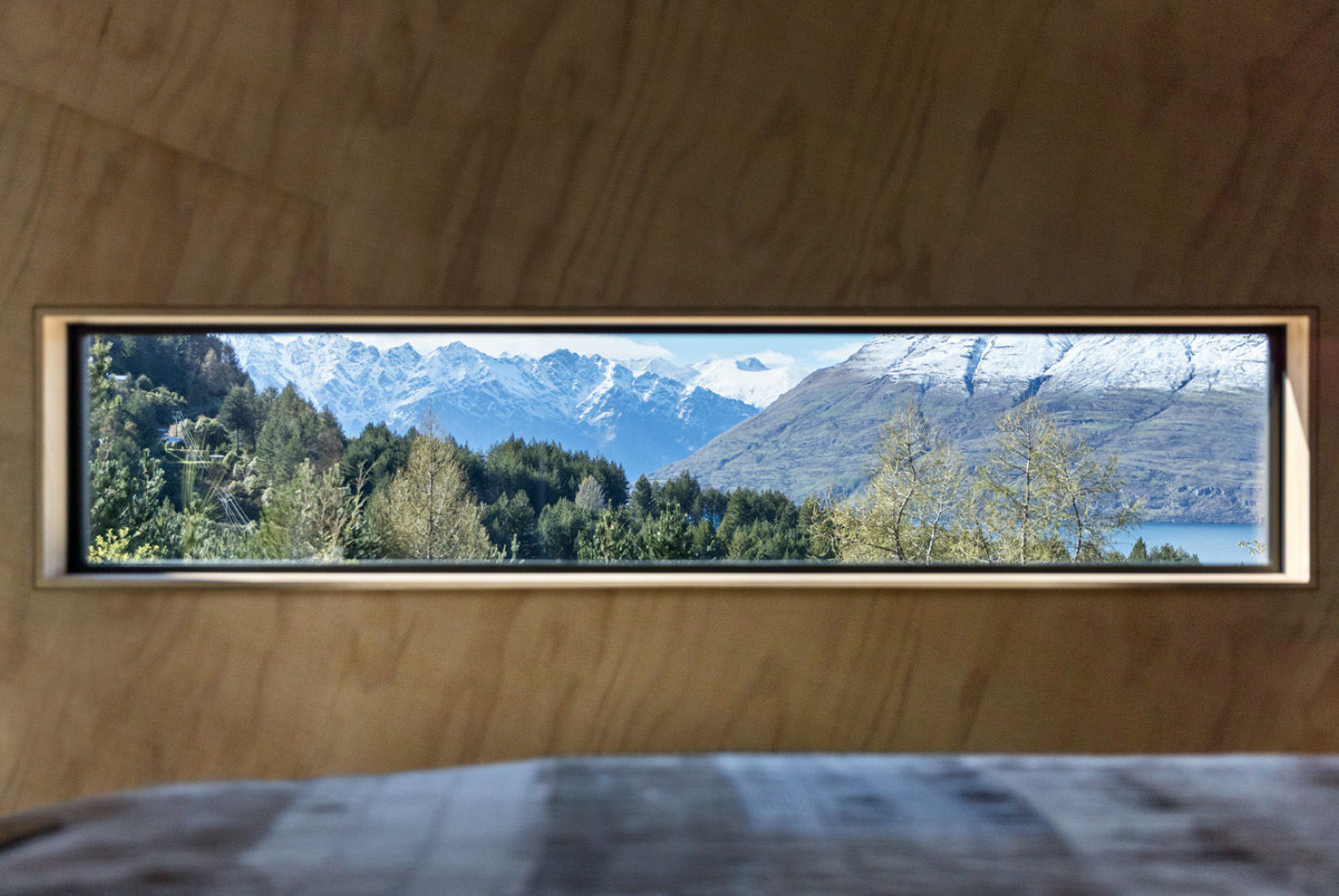 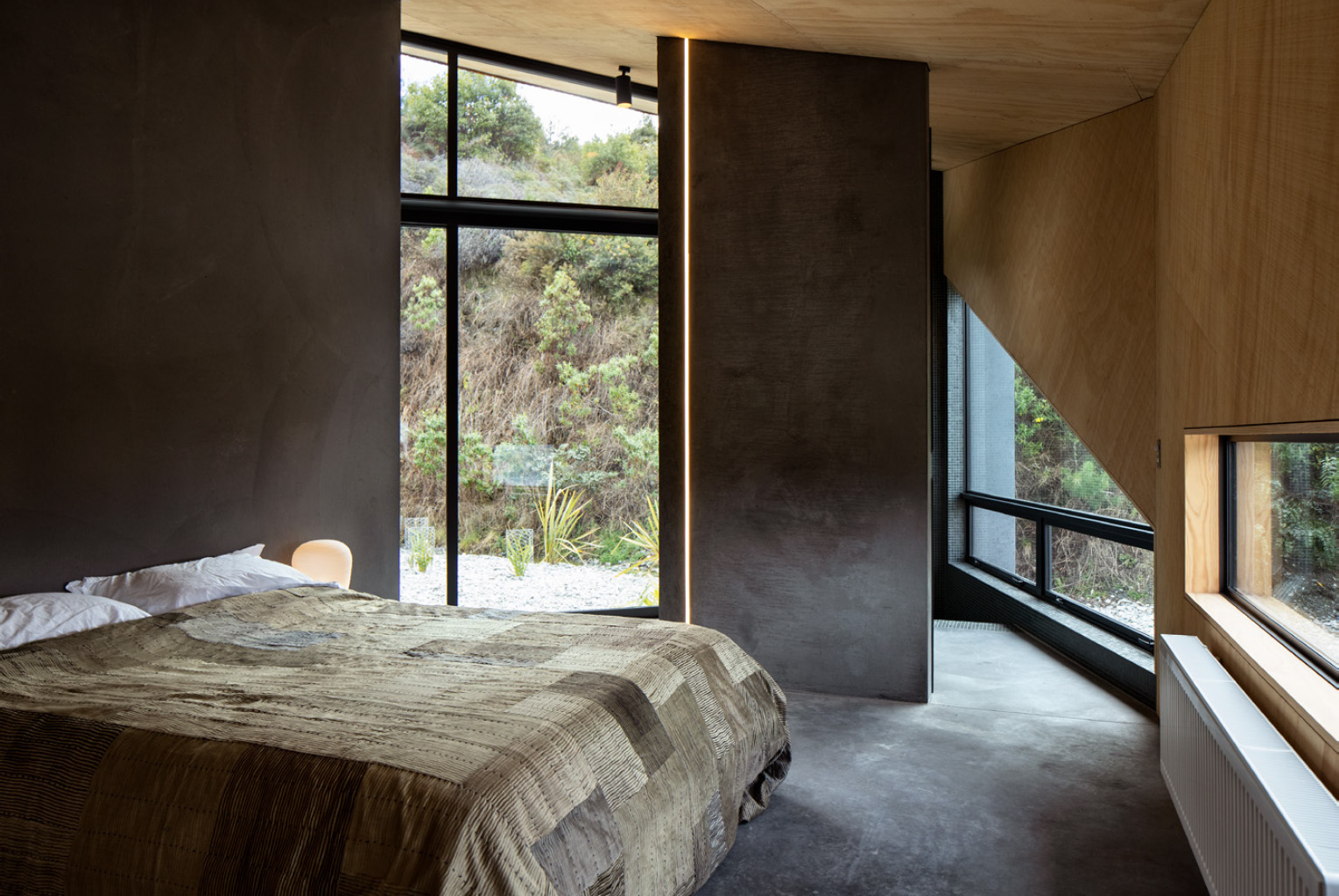 Bedroom Built-in plywood wardrobes offer smart storage solutions in this pared-back space. The bed is also a unique design by Vaughn, while the bedside light is the ‘Rituals 1’ by Ludovica and Roberto Palomba for Foscarini 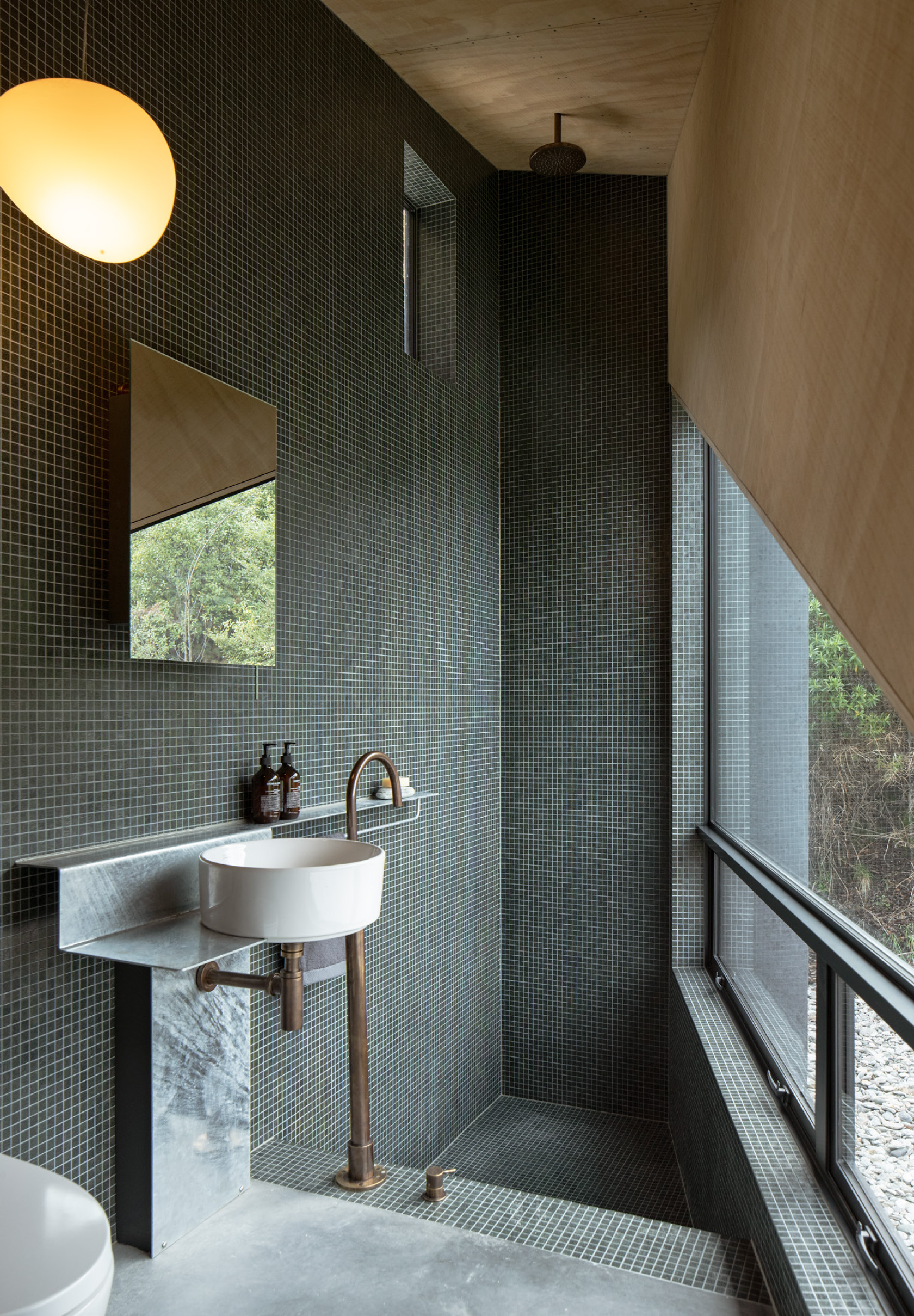 Bathroom A sunken bath and shower, clad in mosaic tiles, is cleverly tucked into the corner of this room. The wall light is another version of the ‘Gregg’ by Ludovico and Roberto Palomba for Foscarini. For a similar basin, try Lusso Stone 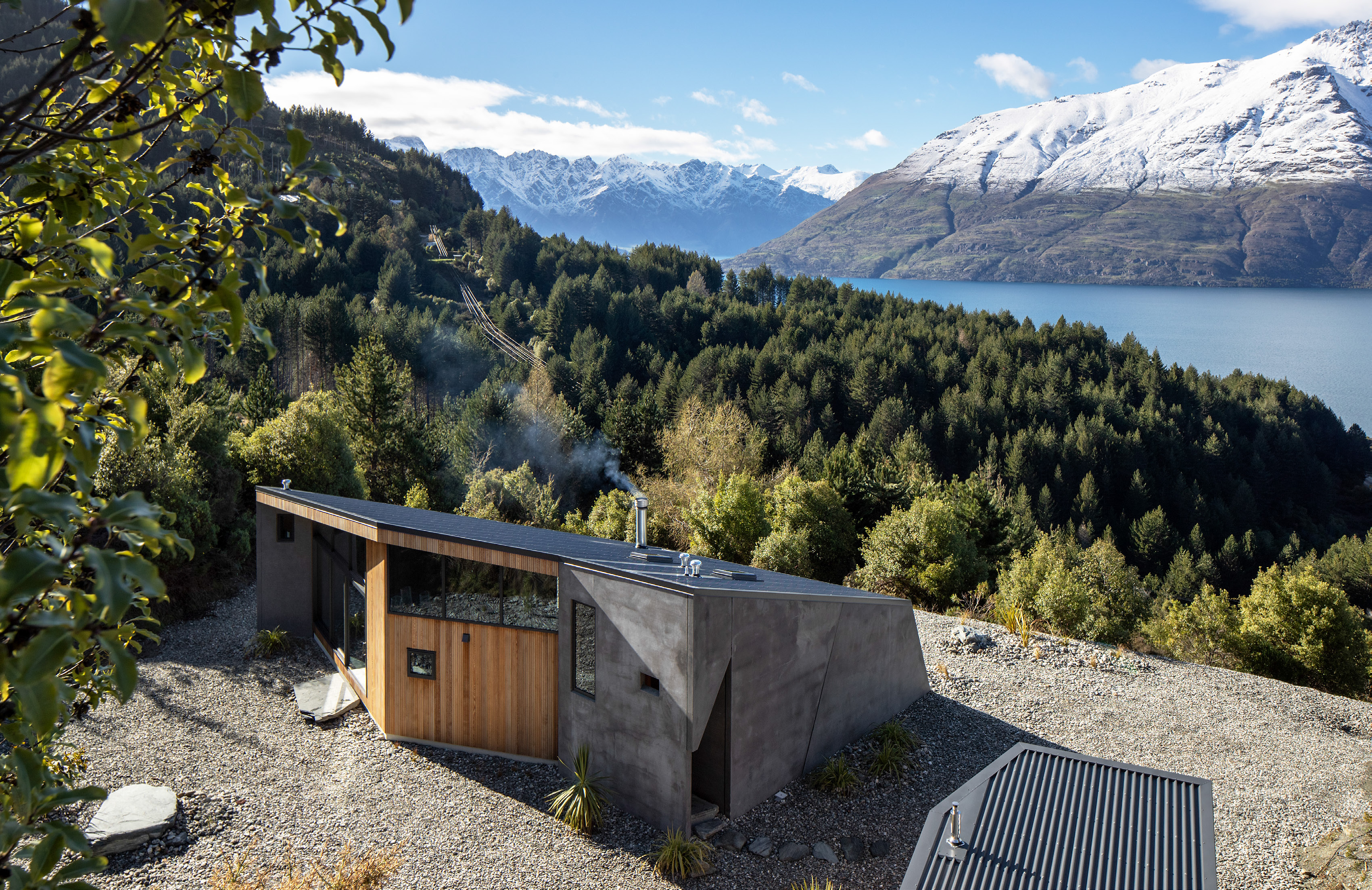 Exterior The concrete slabs that form this build, with their angled joins and intriguing openings, were carefully designed to follow the lines of the existing hillside and the surrounding peaks See Stockists page for details
■