WHY HUAWEI ISN’T SO SCARY

By Elsa B. Kania and Lindsey R. Sheppard
Illustration by JOAN WONG 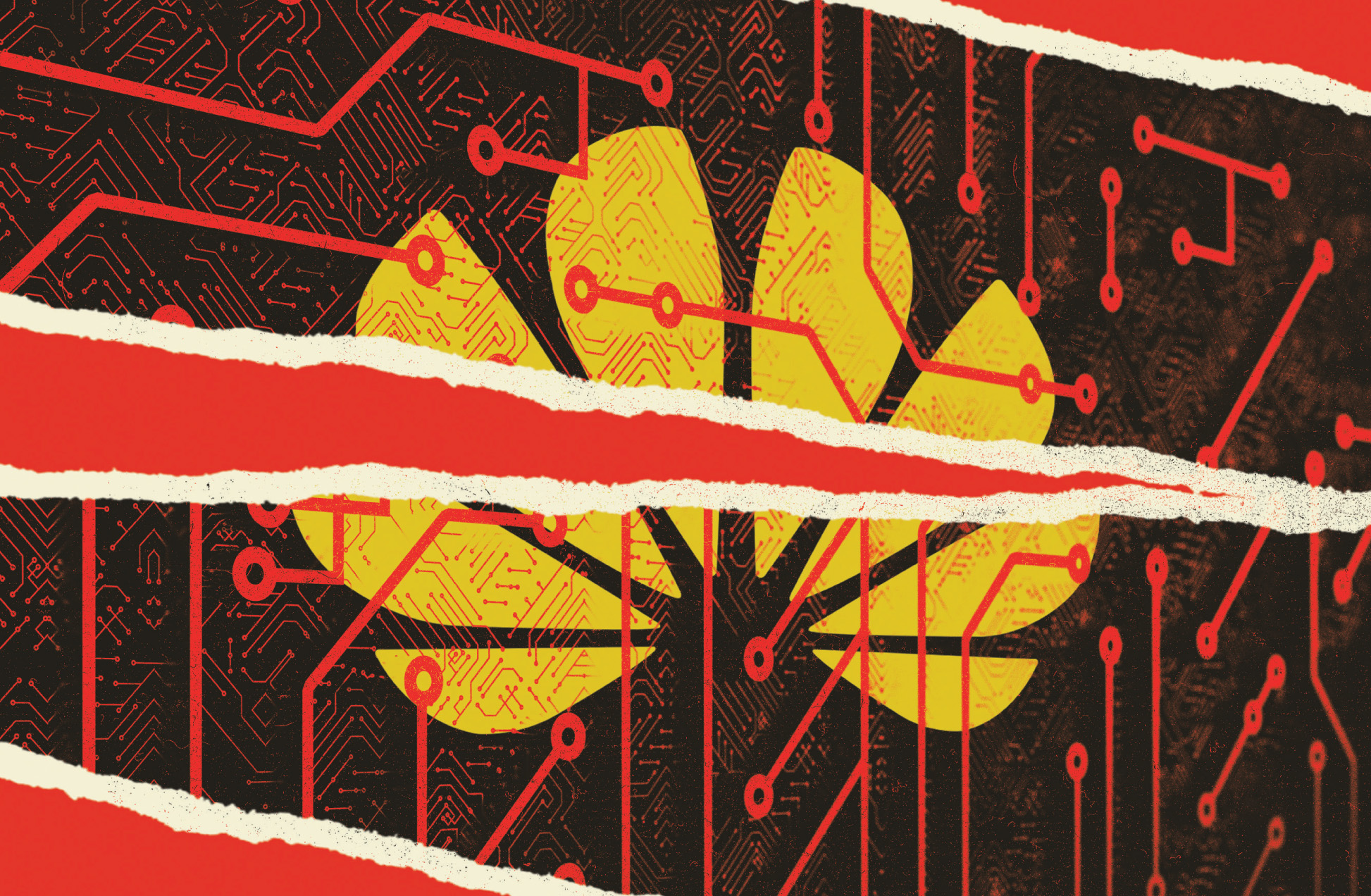 5G MAY HAVE BECOME A BUZZWORD, but the notion that countries must rush to be first to deploy it is mistaken and reckless—and increases the odds of security breaches. There’s no doubt that 5G is important, promising the high speeds and unparalleled connectivity that are required to unleash the full potential of the “internet of things”—the ever-growing network of web-connected devices—and artificial intelligence. 5G could prove critical to economic competitiveness, but not only will a race to install the system end up backfiring, there is also reason to think twice about the claims of China’s Huawei that it alone can shape our technological future.

Huawei’s marketing—and Chinese government propaganda—has built the impression that it’s either Huawei or no way to 5G. The telecommunications firm declares itself the unparalleled leader in 5G as it attempts to secure commercial partnerships around the world, now boasting more than 50 contracts across some 30 countries. In Europe, Huawei has even launched a campaign urging residents to “Vote for 5G,” as if its 5G technologies were the only way for Europe to achieve a smarter future.

Huawei’s claims to be No. 1 in 5G can be misleading. Huawei is a leader and a powerhouse, but it is not the only top player. And it isn’t clear that the company is winning—at least, not yet. Although Huawei’s technological capabilities shouldn’t be underestimated, there are reasons to look skeptically at its supposed superiority in 5G.

Huawei’s quest for dominance in the global telecommunications industry has involved tactics and practices that are antithetical to fair, healthy competition. That Huawei has amassed a market share estimated at nearly 30 percent of the global telecom equipment industry reflects its capacity to underbid and undercut competitors, not to mention multiple alleged incidents of bribery and corruption. The Chinese firm’s determination to provide cheap services and equipment to capture market share often puts intense pressure on competitors. But it’s not always a fair fight: Huawei’s rise has been enabled by the billions of dollars in support, subsidies, and various benefits it has received from the Chinese government. For instance, Huawei has lines of credit from state-owned banks that reportedly amount to $100 billion.

Huawei has also been helped by a business culture in which theft is often encouraged—even outright incentivized. At best, some of its activities, such as the aggressive recruitment of talent from rivals, may be considered standard practice within the industry. At worst, however, Huawei’s business practices violate legal boundaries. There have been numerous accusations of intellectual property theft, as well as ongoing reports of attempts to expropriate sensitive technologies, from the early copying of Cisco source code to military technology. And what these dubious practices reveal is that Huawei is in fact not as cutting-edge as its publicity claims.

The idea that Huawei has an insurmountable lead in the 5G race also represents a failure of observers to distinguish its carefully crafted image from any real technological edge. To be sure, Huawei has long pursued 5G. Since 2007, it has invested massively in next-generation telecommunications, spending more than $60 billion on research and development over the course of a decade. And the company now plans to increase its 5G investments as part of an annual R&D budget that may exceed $15 billion.

Huawei truly does provide mature and cost-effective equipment. It is one of the few players offering an end-to-end 5G solution, with particular strengths in radio access networking. However, it’s unclear how well the company’s systems integrate with existing 4G infrastructure from other vendors. The security of Huawei’s products has been assessed to be subpar, and the long-term performance of its 5G networks also remains questionable. Countries that choose this low-cost option for fear of losing out in the 5G race risk creating an unstable and insecure foundation for their future societies and economies.

Although Huawei may assert that it has already taken an unbeatable lead in 5G infrastructure, judging who’s truly ahead in the field means looking at multiple criteria. Such indicators can include commercial contracts, deployed performance, integration with network infrastructure, and real technological innovation. For example, Huawei has claimed that it has more 5G patents than all U.S.companies combined, but quantity does not necessarily correlate with quality—especially in China, where patents are often of dubious value.

Huawei CEO Ren Zhengfei has declared that his company’s dream is to “stand on top of the world.” But the global supply chain remains highly interdependent—a point of leverage that Washington is seeking to exploit by potentially limiting Huawei’s access to U.S. technologies. Moreover, Huawei’s competitors have their own core strengths among the fundamental technologies that will shape 5G. And although Huawei’s promise of relative vertical integration may offer efficiencies, the diversity of competitive suppliers continues to drive both competition and innovation. A number of companies based in the United States, European Union, South Korea, Taiwan, and Japan are also industry leaders and major providers throughout the supply chain. A healthy ecosystem for telecommunications would be based on market diversity and fair competition and would emphasize the importance of regulatory bodies, standards, and industry alliances to ensure security and interoperability.

Monopolies are obviously bad for business—and for security. For instance, even if Huawei were to improve on its own security, a single vulnerability, even a bug believed to be entirely inadvertent, could cause global damage if the company is as dominant as it hopes to be.

The real fight in 5G is not about rapid deployment but about the critical underlying technologies that will become the future of 5G. From R&D to deployment and maintenance, policymakers and mobile network operators should prioritize applying rigorous standards for security. In the process, it is critical to safeguard competition in a diverse marketplace to drive technological innovation. Some industry experts have estimated that 5G non-standalone systems will operate alongside 4G LTE networks for as many as 15 years while true 5G ecosystems mature.

For all of Huawei’s grandstanding, its competitors are also gaining ground. Huawei’s apparent advantages are hardly unassailable in an industry that is continuing to evolve so rapidly. Those countries and mobile network operators that opt not to work with Huawei, whether out of concern for security or to protect competition, will have other viable options. Nokia has been catching up with Huawei in deals on the ground, Samsung and Ericsson are also receiving new contracts for major 5G projects, and Qualcomm is continuing to demonstrate new inventions in 5G.

The future of 5G is still taking shape. The standards and foundational technologies that will underpin it are still works in progress. The U.S.government, in coordination with a range of allies and partners, can step into the fray by bolstering support for R&D, including expanding funding for academic research on next-generation technologies, and by providing tax credits to incentivize investment in the technology while actively supporting initiatives that aim to foster a more inclusive and competitive ecosystem. The United States and like-minded countries must continue to explore options to ensure that the 5G future will be secure and competitive.

ELSA B. KANIA (@EBKania) is an adjunct senior fellow with the technology and national security program at the Center for a New American Security.

LINDSEY R. SHEPPARD (@lindseysheppard) is an associate fellow with the international security program at the Center for Strategic and International Studies.