THE BEST-PERFORMING CEOS IN THE WORLD, 2019 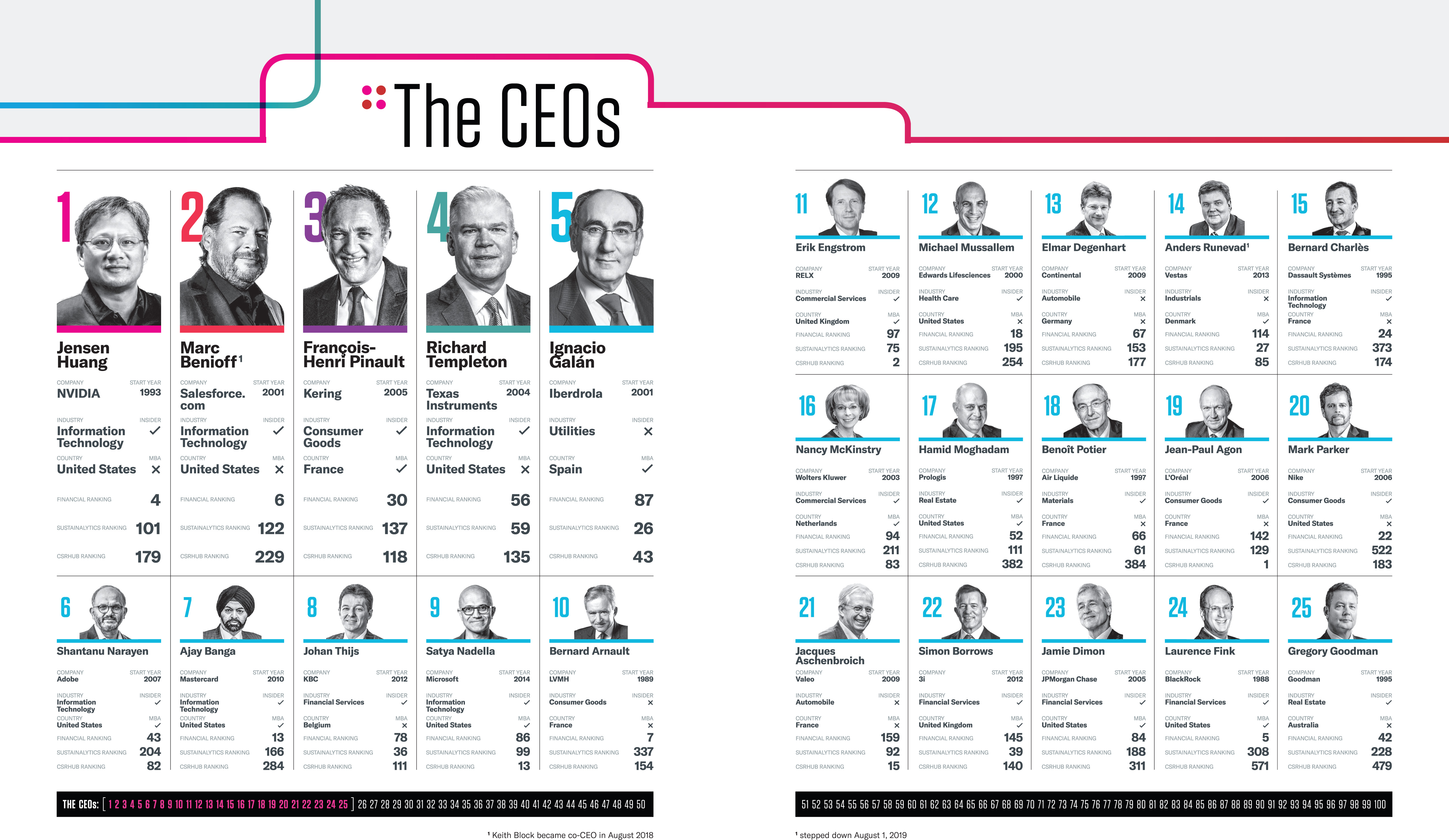 WHEN JENSEN HUANG cofounded NVIDIA, in 1993, he focused on a single niche: building powerful computer chips to create graphics for fast-moving video games. As the company went public in 1999 and grew through the 2000s, video games remained its growth engine—but even back then, Huang, a Taiwanese immigrant who studied electrical engineering at Oregon State and Stanford, could see a different path forward. Data scientists were beginning to ask computers to perform much more sophisticated calculations more quickly, so NVIDIA began spending billions of dollars on R&D to create chips that would support artificial intelligence applications. By the mid-2010s its AI-focused chips had come to dominate this nascent market, showing up inside autonomous vehicles, robots, drone aircraft, and dozens of other high-tech tools. One look at NVIDIA’s stock chart shows how this bet has paid off: From late 2015 to late 2018, the company’s stock grew 14-fold—a performance that puts Huang, 56, in the top spot on HBR’s list of best-performing CEOs in the world this year.

Huang is a new face at #1, but he’s no newcomer to the list: He ranked #2 in 2018 and #3 in 2017. (Last year’s top performer, Pablo Isla, of the Spanish retailer Inditex, moved from CEO to chairman, taking him out of consideration for 2019.) That consistency is typical of our list. Unlike rankings that are based on subjective evaluations or short-term metrics, it relies on objective performance measures over a chief executive’s entire tenure—and these “career numbers” tend to hold steady. It’s no surprise, then, that 65 of last year’s CEOs reappear this year.

They do so despite a change in our methodology. Since 2015 our ranking has been based not only on financial performance but also on environmental, social, and governance (ESG) ratings. For the past four years we’ve weighted ESG scores to account for 20% of each CEO’s final ranking. This year we tweaked the formula, increasing that share to 30%. (See “How We Calculated the Rankings.”) The shift reflects the fact that a rapidly growing number of funds and individuals now focus on far more than bottom-line metrics when they make investment decisions. One sign of this changing sensibility: In August 2019, 181 U.S. CEOs who are members of the Business Roundtable signed a statement affirming that the purpose of a corporation is to serve not just shareholders but four other groups of stakeholders: employees, customers, suppliers, and communities.

The change in ESG weighting did create one casualty: Amazon CEO Jeff Bezos. On the basis of financial performance alone, Bezos has been the top CEO every year since 2014. However, he failed to make this year’s list owing to Amazon’s relatively low ESG scores. According to Sustainalytics, one of two ESG data firms that assist HBR with its ranking, those scores reflect risks created by working conditions and employment policies, data security, and antitrust issues.

As in past years, women are underrepresented among the 100 leaders. The 2019 list does bring a small measure of good news, however: Four female CEOs made the ranking (all are in the top half), up from three in 2018 and just two in prior years. Each year when HBR publishes this list, some readers protest the paucity of women; each year we respond by saying it’s the result not of the performance of female CEOs but of how few women serve in the role—a phenomenon we, too, find regrettable.

The CEOs who appear in the following pages display remarkable longevity—and illustrate how happy boards are to allow a high-performing leader to stay in the job for many years. The CEOs of the S&P 500 have an average tenure of 7.2 years; in comparison, HBR’s best-performing CEOs have been in the job 15 years, on average. (Our methodology, which excludes CEOs with less than two years’ tenure, may be a factor in why that number is so high.)

The articles that follow the ranking examine this long tenure through different lenses. The recruiting firm Spencer Stuart discusses the results of a data-driven study that reveals a common pattern in how CEOs perform according to their tenure. Among its findings: Those who perform well enough to survive into their second decade on the job tend to experience a period of above-average performance—something many of the CEOs on HBR’s list are currently enjoying. And Bill George, a Harvard Business School professor who spent a decade as the CEO of Medtronic, argues that many CEOs linger too long because they can’t find the right time to retire and can’t conceive of what they’ll do next. He offers a road map for approaching both questions.

For now, however, investors in the companies whose CEOs rank this year will hope that Huang and the others stay in place—and keep right on performing. 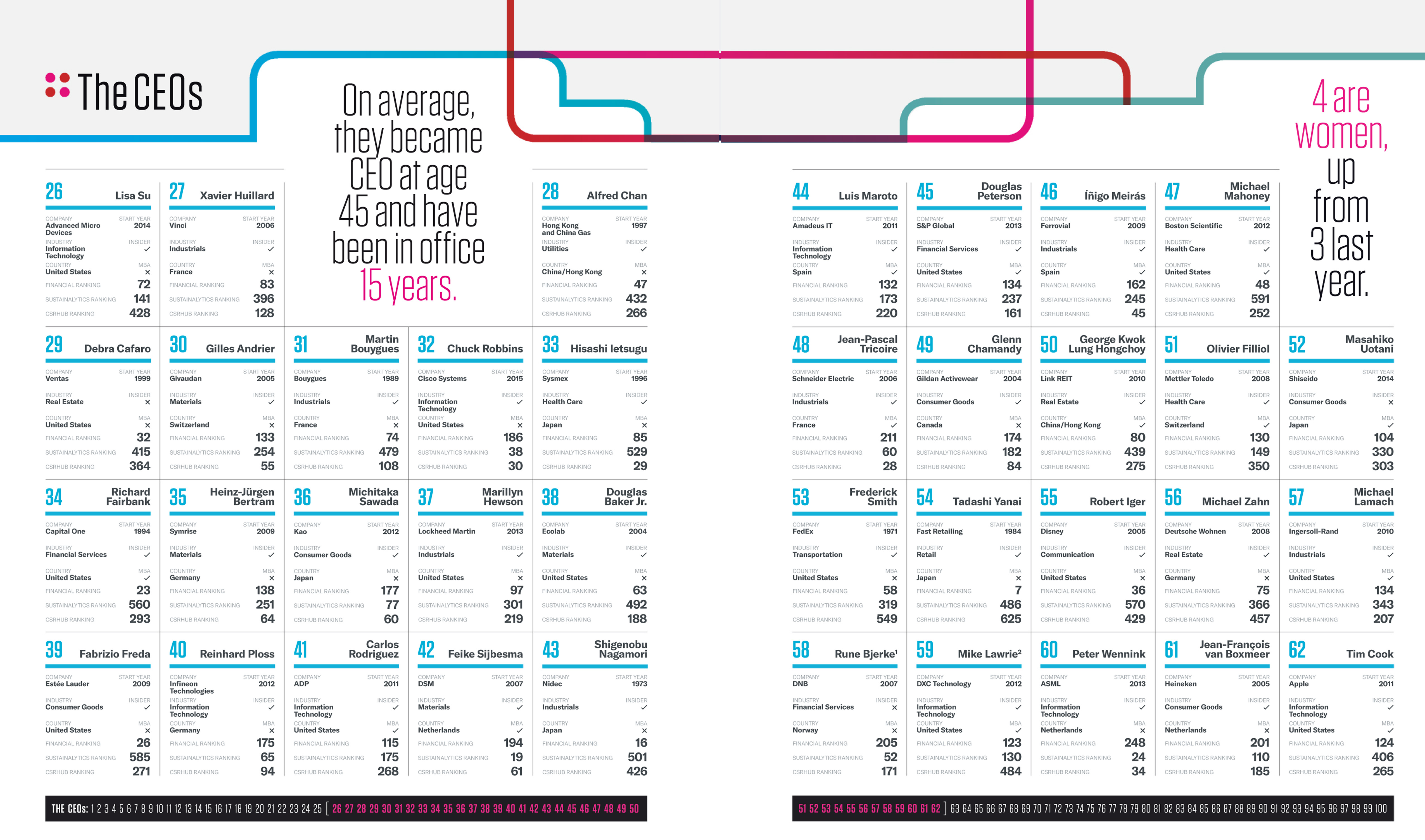 On average, they became CEO at age 45 and have been in office 15 years.

87 are insiders, unchanged from last year. 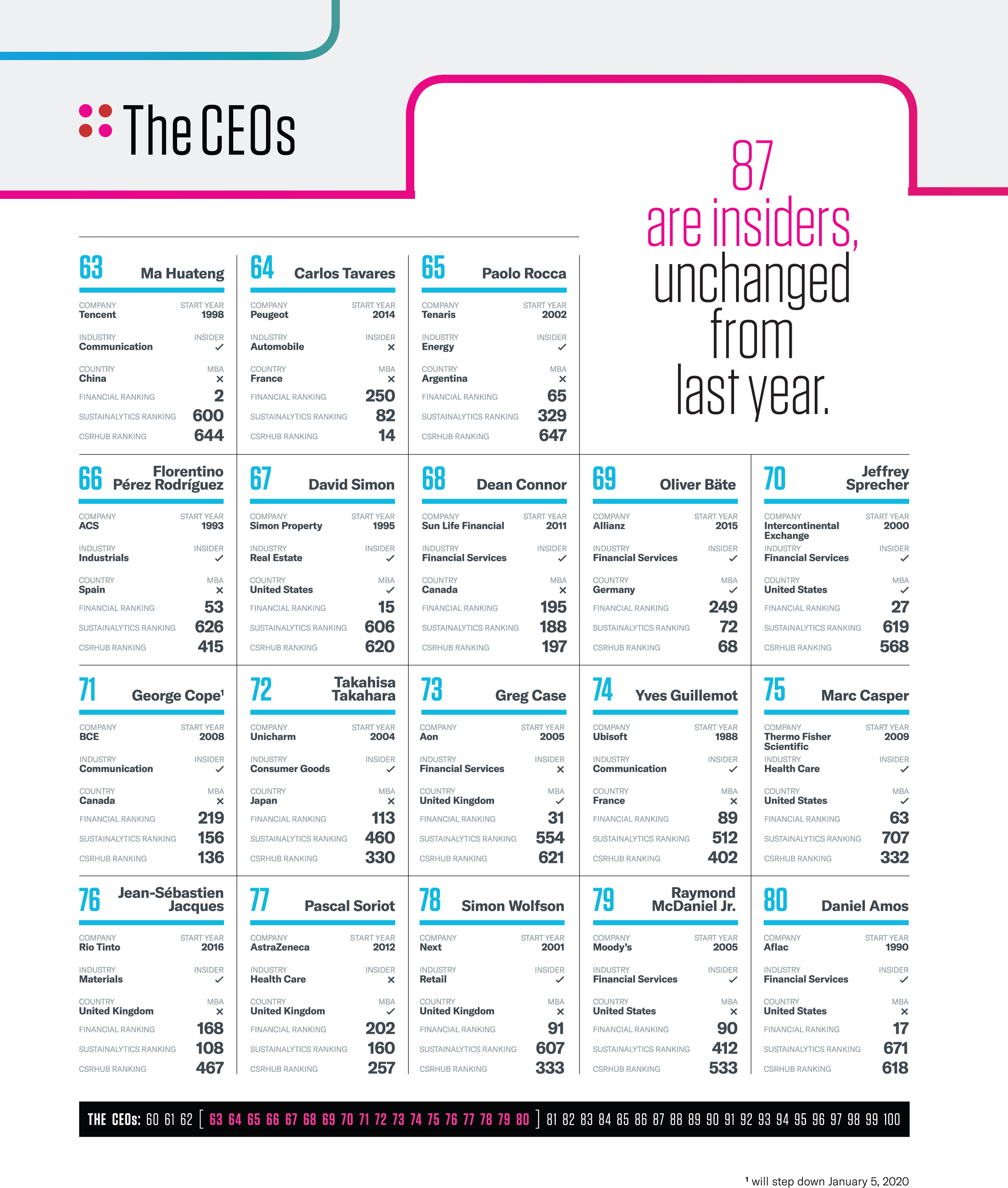 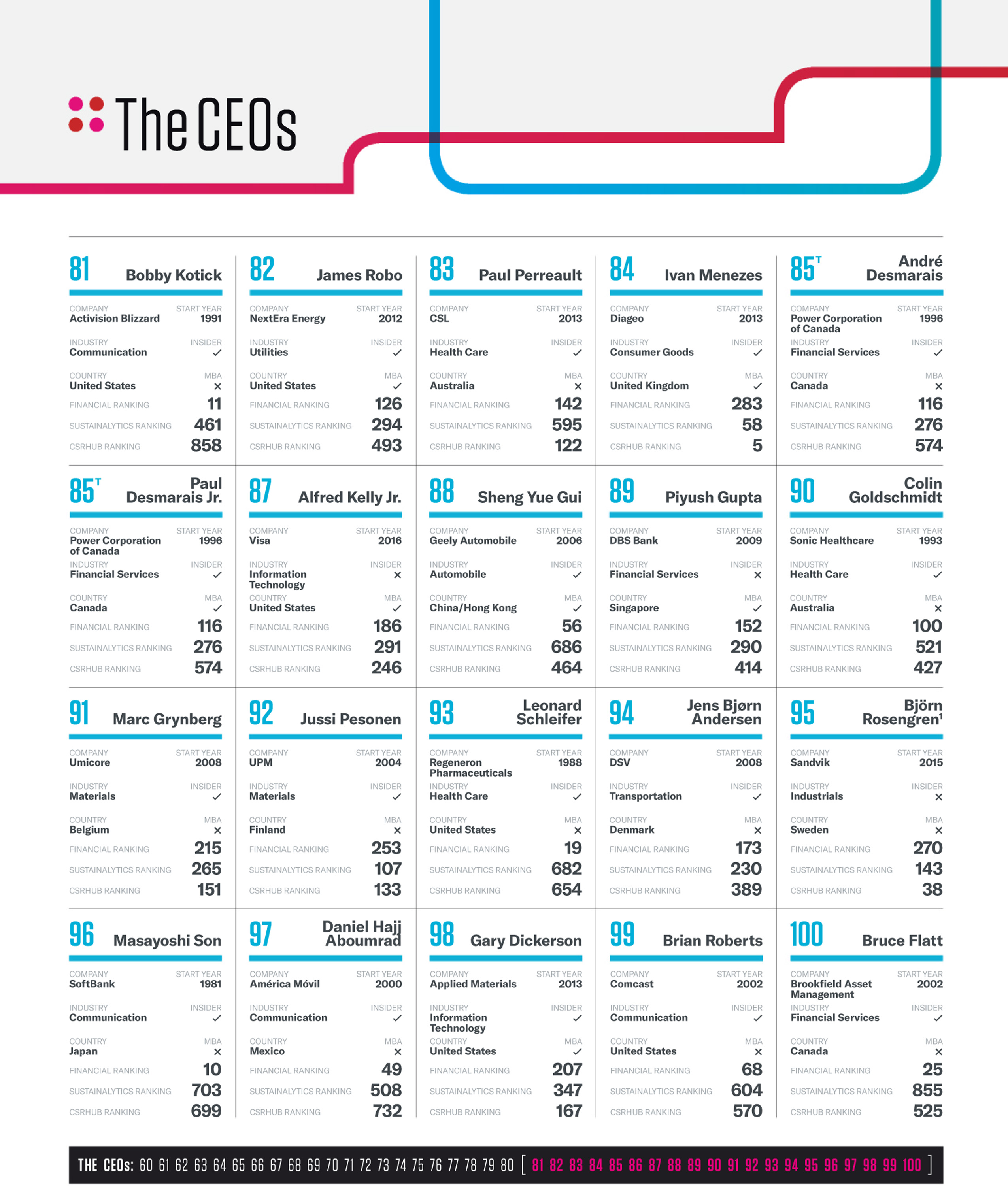