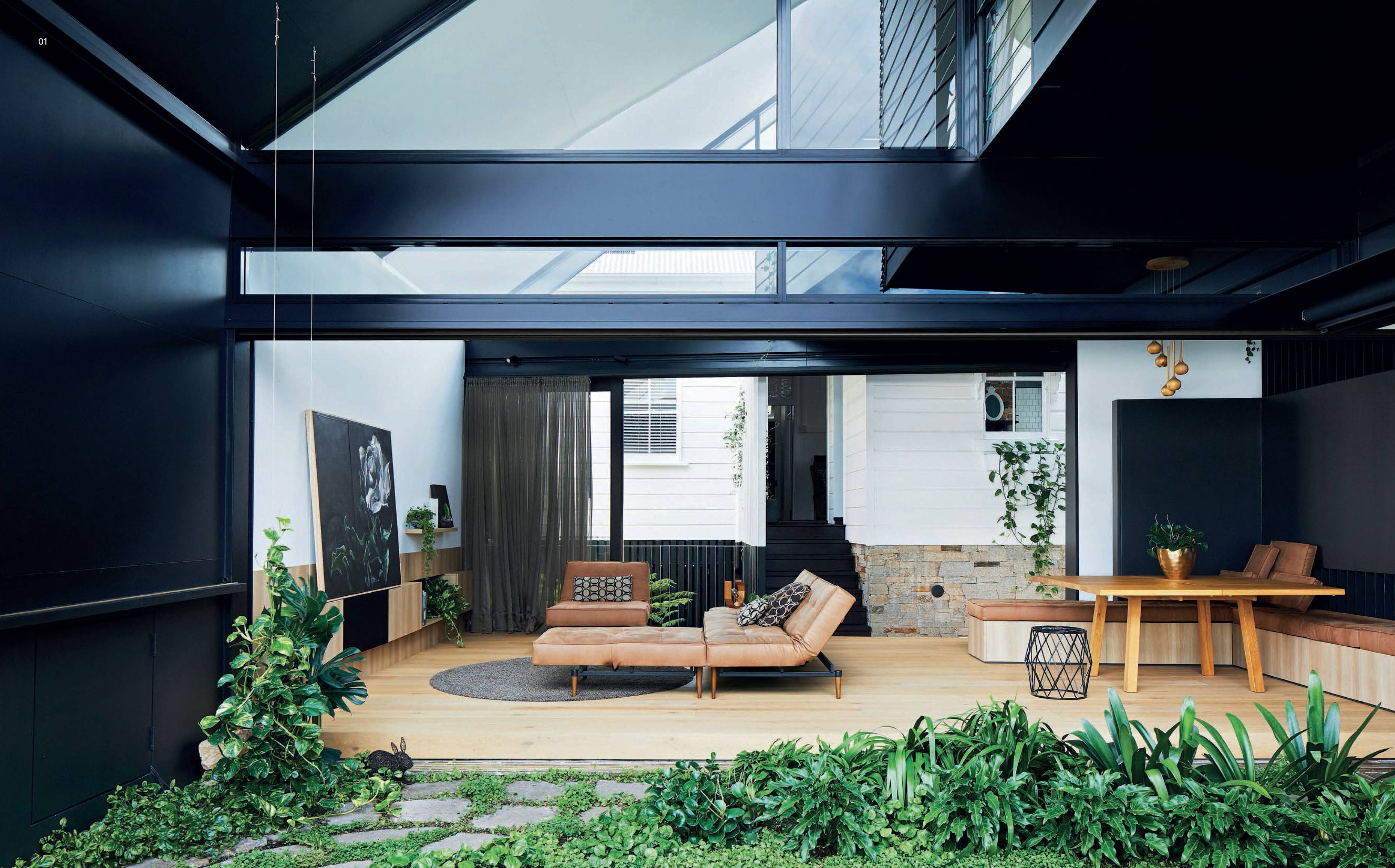 01 The new living and kitchen spaces are connected to the existing cottage by a half-height staircase that leads from the original hallway.

Brisbane’s vernacular traditions are a source of inexhaustible enquiry for contemporary architects. For Terry McQuillan, director of Brisbane practice Bureau Proberts, unpicking and re-packing the worker’s cottage architectural type to make a contemporary home for himself and his wife Charlie has been an irresistible challenge, twice taken up. This second iteration began as a speculative proposal following the completion of the couple’s Wooloowin House project; once the pair observed the latent potential of Albert Villa, sited on 235 square metres with three street frontages in the inner-city enclave of Petrie Terrace, they agreed to upgrade.

Albert Villa was constructed in 1885 by Peter Albert and is included in Rod Fisher’s 1988 local survey of historic houses, Petrie-Terrace Brisbane 1858–1988, in which it’s described as “a four-roomed core beneath a pyramid-shaped roof clad in corrugated iron.” Additional elements include, “double French doors leading onto a side verandah [and] a neat little kitchen house attached lengthwise to the back side.” The entry praises the house as “somewhat superior to run-of-the-mill worker’s houses in the 1880s.”

Supplementary curios, added incrementally over the course of its 130-year lifespan, had by turns improved and diminished the original. Terry and Charlie retained some of these additions, such as the reclaimed wrought-iron verandah balustrades, chimney and fireplace extensions and the pressed-metal ceilings. Others were carefully excised, among these the bathroom enclosure on the front verandah and the postwar sunroom. With the realization that small and imperceptible moves would not fulfil the potential of the site, came plans for large-scale landscape and architectural interventions aimed at engaging with views and the garden while honouring the tripartite arrangement of the historic cottage.

As muse, Albert Villa offered lessons in scale, proportion and materiality. The building’s pyramid top, verandah-wrapped centre and grounded under-storey set the parameters for the expression of new additions. The responsible strategy adopted was to subvert the height of the rear extension, giving primacy to the original cottage while echoing its metal roof, weatherboard skin and stone base. The eastern elevation reads as a two-dimensional version of the familiar cottage silhouette, with the new roof folding away from the flat timber facade, wrapping up and over new additions. Within this roof space a bedroom chamber is neatly packed, while below, new social spaces engage in a dialogue with the street in an enclosed-verandah scenario.

The extreme topography of the site also shaped the architectural response. The almost six-metre fall from front verandah on the northern boundary to the rear laneway to the south permitted the trickiest of moves – the introduction of a double car garage to the site – to be achieved with minimal interruption to the whole. Capping the garage, a deep concrete slab established a new elevated terrain, the critical element required to ground the contemporary cottage and fulfil the architectural obligation to incoporate landscape on the site.

The new ground floor of the extension connects by means of a half-height staircase from the central corridor of the original cottage. Where the old sunroom was demolished a rainforest fernery takes seed, rising up from natural ground a storey below. From a narrow breezeway wedged between old and new, contemporary living and dining spaces open out, with built-in and loose furniture arranged atop a timber plinth. Beyond, a lush carpet of green unfurls, courtesy of delicate dichondra groundcover contained by black fence-like walls. The subtle elevation of the oak floor serves to visually obscure sunken door tracks and strengthen the immersive quality of the garden surrounds.

Pushed hard against the eastern boundary, the kitchen is laid out on stone. The outdoor quality of this room is intensified by this floor treatment combined with a louvred wall that harnesses breeze and stacking doors that allow for a fluid garden connection. From the island bench a tremendous view is framed, looking west toward Mt Coot-tha and the wider Taylor Range. As the ink-black surfaces of the building recede, the chromatic brilliance of nature escalates and visual connections are drawn between the verdant garden foreground and the variegated greens resonating across hillsides and mountainous landscapes beyond frame. At this precise moment, architecture surrenders its power to the greater forces of nature.

With domestic-scale manoeuvres, Albert Villa navigates city-scale strategies to protect heritage, enliven streets, frame views and leverage a benign climate. With a commitment to landscape, the architecture reinvigorates the role of the backyard, elevating it both physically and ideologically. The scheme supports the delightful notion that contemporary rooms can entertain infinite degrees of enclosure and conversely that backyards can exist in infinite varieties of containment. For three decades Bureau Proberts has committed to honouring its “Queensland roots.” At the compellingly domestic Albert Villa, the practice’s subtropical-living dialogue deepens.

Bathroom: Basins and toilet from Rogerseller; tapware and fittings from ABI 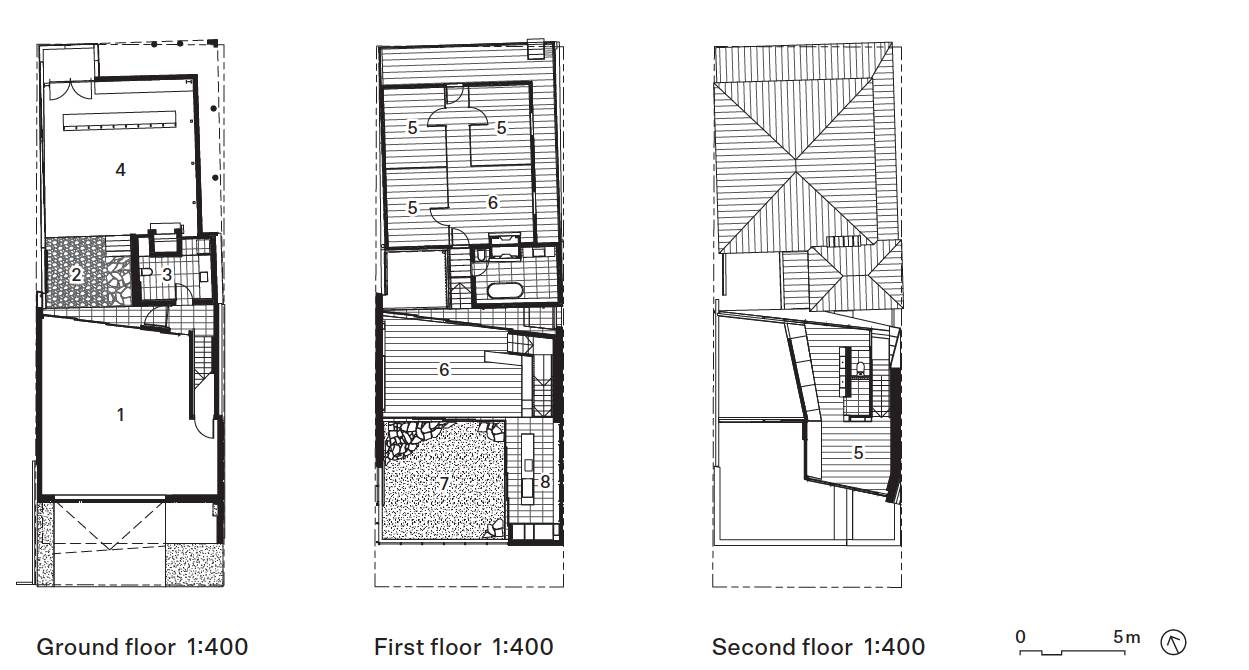 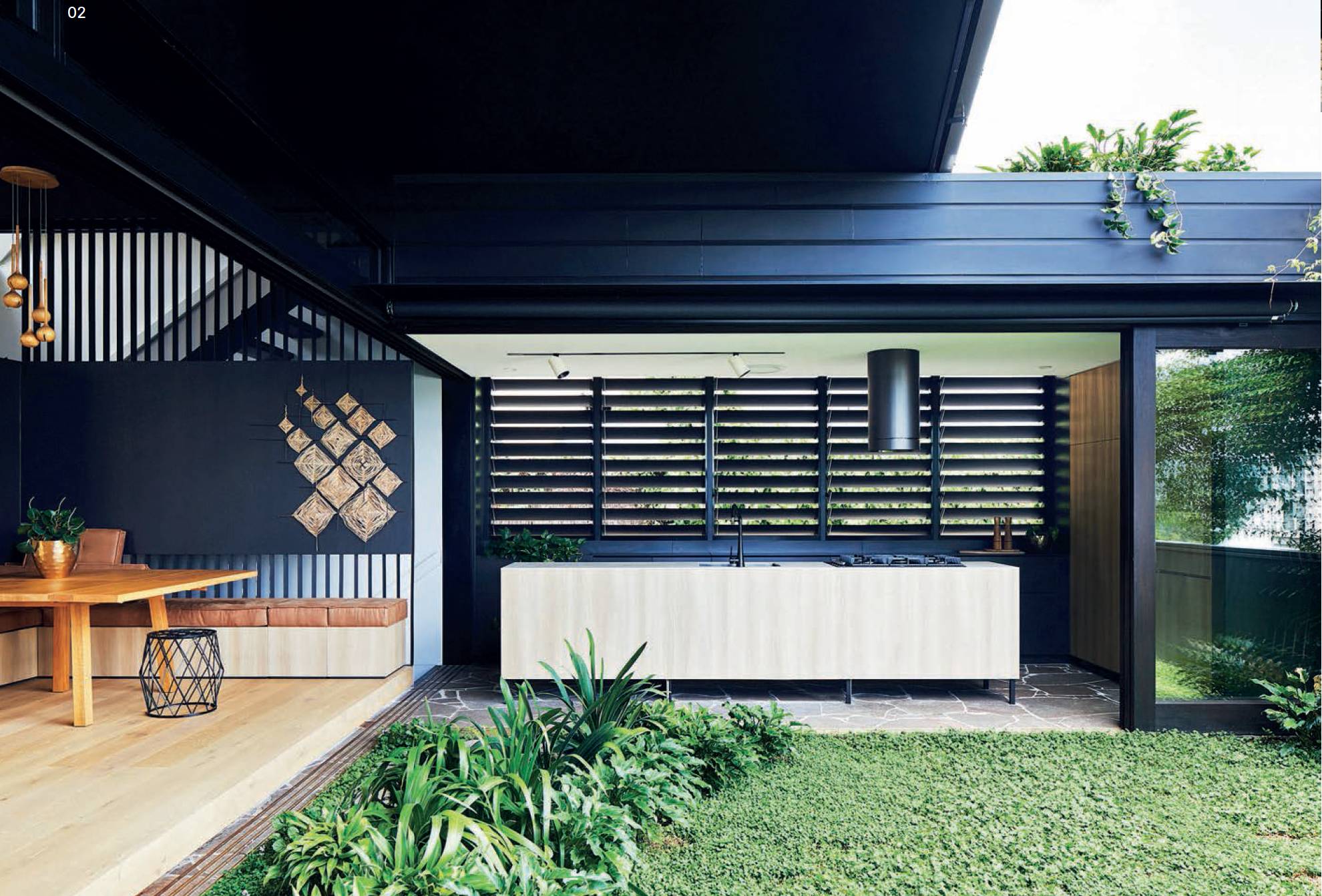 02 A stone-floored kitchen with large stacking doors encourages a fluid dialogue between inside and out. 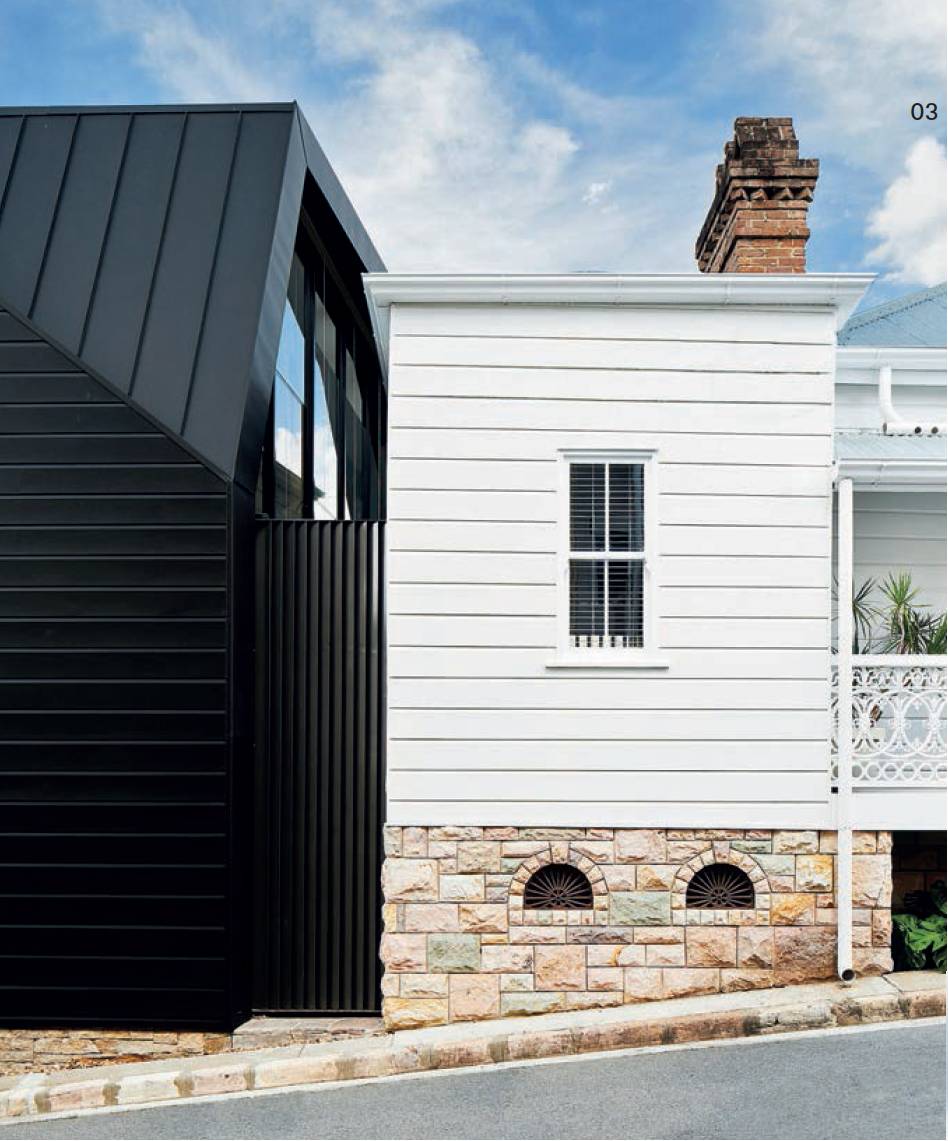 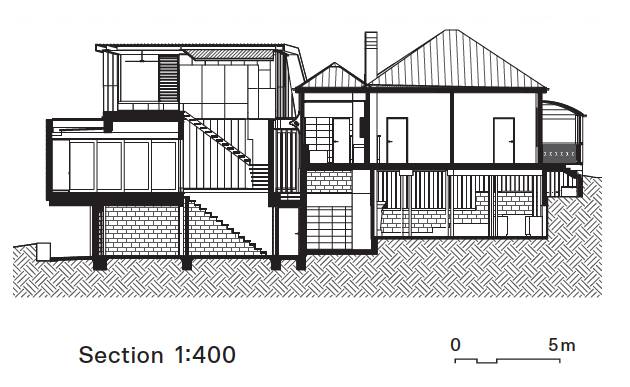 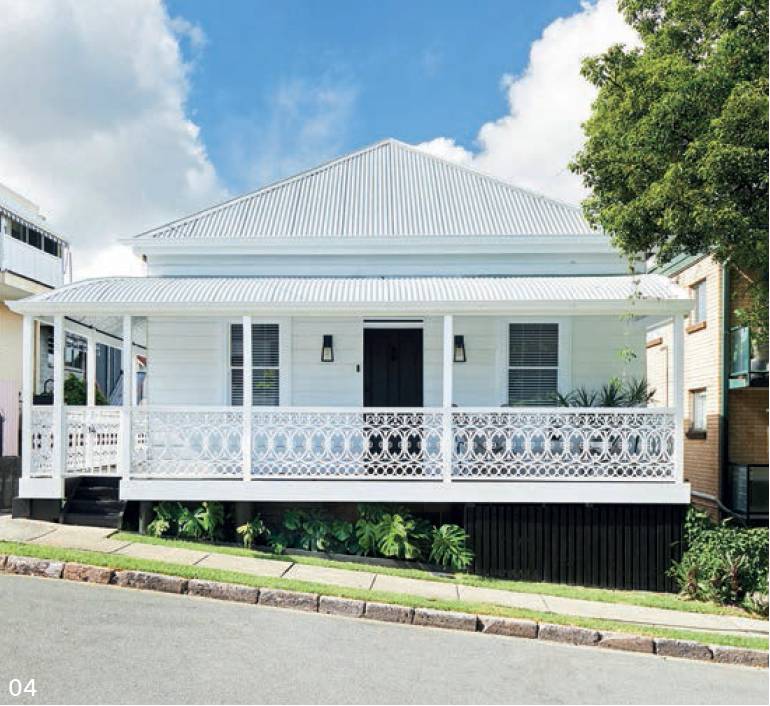 04 What was once described as “superior to a run-of-the-mill” worker’s cottage has been updated and enhanced.