KIM WALKS OUT ON KANYE 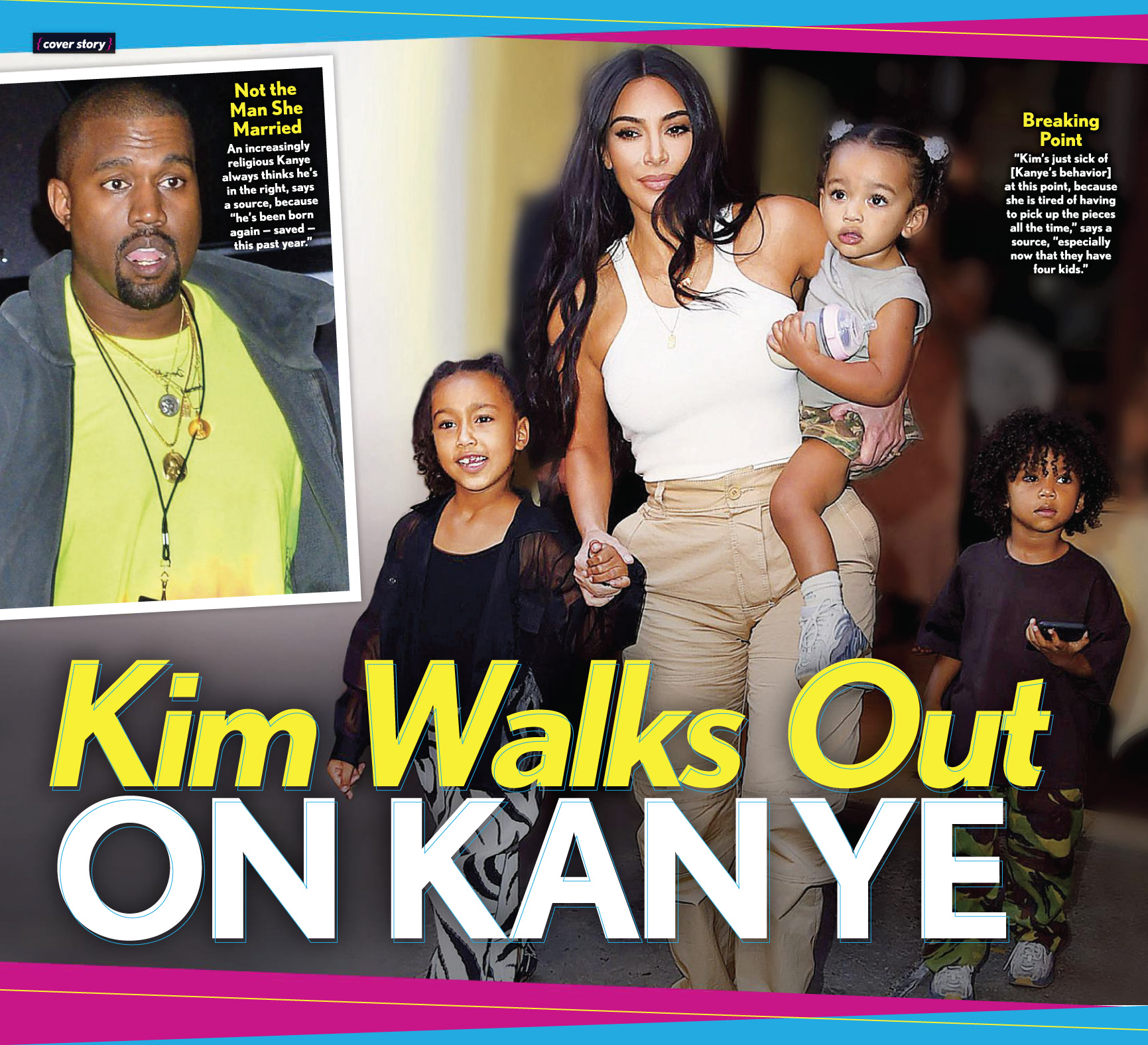 Not the Man She Married

An increasingly religious Kanye always thinks he’s in the right, says a source, because “he’s been born again — saved — this past year.”

“Kim’s just sick of [Kanye’s behavior] at this point, because she is tired of having to pick up the pieces all the time,” says a source, “especially now that they have four kids.”

Kim Kardashian was riddled with anxiety that led her to explode in anger. The night before May’s Met Gala, husband Kanye West dropped a bombshell after seeing her skintight corseted Thierry Mugler look. “A corset is, like, a form of underwear. It’s hot. It’s, like, it’s hot for who, though?” the rapper said, making Kim’s jaw drop as he went on to shame her, citing a recent personal evolution that’s left him feeling that Kim “showing her body off” is not right. “You are my wife, and it affects me when pictures are too sexy.” Kim was livid, firing back during the fight — which was revealed on the Oct. 13 episode of Keeping Up With the Kardashians — “You built me up to be this sexy person and [to have] confidence…. And just because you’re on a journey…doesn’t mean that I’m in the same spot with you.” Kanye got up and walked out.

And now, Life & Style has learned, Kim has done the same. After months of increasing tensions that have only been getting worse as Kanye, 42, devotes himself to music and religion at the expense of his family, Kim, 39, has come to a crossroads. “Kim and Kanye are living totally separate lives right now. He is so hyper-focused on himself and his album and performing his Sunday Service that he’s totally detached from Kim and their four children,” explains a source, who says Kanye’s selfish behavior has forced Kim to reevaluate their relationship, especially as it’s having a chilling effect on life inside their $60M compound in Hidden Hills, Calif. At this point, says the source, “because of the chaos at the house, Kim has up and left with the kids. It’s over.”

Momager Kris Jenner’s mansion has been a frequent refuge over the years. “When Kanye would have all-night recording sessions, Kim regularly took the kids and fled to Kris’ mansion in the middle of the night for some peace,” says the source, explaining that Kanye often had people in and out of their house recording music and has been “spending millions and millions of dollars of their own money” to pay for it as well as for a huge choir and staff for his weekly Sunday Service music and preaching event — which he’s taken to Washington, D.C., Chicago, Detroit and even Wyoming, where he recently bought property — since starting it in January. “Kim has tried to talk sense into him, but Kanye says it’s his calling,” adds the source. “She’s scared he will blow through all of their money.”

It’s an understandable worry, considering that just three years ago, Kanye publicly revealed he was $53 million in debt because of lavish spending on his music and fashion endeavors. Kim, who’s worth an estimated $350 million as of now, has other concerns, though. With Kanye refusing to take on his share of the family responsibilities, “she feels like a single parent. Kim’s doing it all while balancing her beauty empire, reality TV career and legal studies,” says the source, noting that Kim plans to take the bar exam in 2022 to become a lawyer. While the mogul has staff to help, she’s still struggling. “Kim is completely overwhelmed and fed up with Kanye’s erratic behavior,” says the source, adding that concerned friends and family members agree that Kanye “is completely out of control.” Kim has, of course, put up with his antics for years (see sidebar), “but she has so much on the line right now,” says the source, “that Kim feels he’s being an especially bad partner.”

Kanye only fully embraced Christianity in 2019. But, boy, has he embraced it. During an October visit to George Washington University in Washington, D.C., he told an audience, “I’m a recent convert; that means I recently got saved this year” and went on to praise God, telling the crowd, “Imagine someone sending their only son — they don’t have 10 sons — their only son, to die for you!”

He’s also recently made it clear to those around him that he’s intent on transforming his career to reflect his salvation. “He says he won’t go back to recording traditional music,” explains the source. “He wants to live this godly life and says things like, he believes his life was saved for a purpose and he needs to fulfill it.” Some close to Kim are convinced Kanye, whose IMAX film Jesus Is King comes out Oct. 25, has taken his obsession too far. He doesn’t just love God, says the source, “Kanye seems to think he is God, and he’s scary.”

Kim has no problem with Kanye celebrating his faith. She too identifies as a Christian — in early October, Kim brought kids North, 6, Saint, 3, Chicago, 21 months, and Psalm, 5 months, to Armenia to be baptized at the Mother See of Holy Etchmiadzin, the country’s celebrated cathedral. But it was sister Kourtney who accompanied Kim, not Kanye, “and [the baptism] trip was Kanye’s idea!” notes the source. “He dropped the ball once again.”

In Kim’s E! True Hollywood Story, which aired in October, she confesses that Kanye — whom she met in 2002 and started dating in 2012 — was told to stay away from her. “Everyone would tell him, ‘You can’t be with her. She’s a reality star. She’s gonna sink your career,’” Kim recounted. “He was just like, ‘I don’t care.’” Knowing how things have turned out, though, those close to Kim now believe maybe she’s the one who should have steered clear of Kanye.

Kim might have money, fame and a beautiful family, but it hasn’t translated to true happiness. So she’s doing what she needs to do to keep her kids content and her career on track. “Kanye will never sign divorce papers. Kim knows that,” says the source. “But she doesn’t care. She just wants peace and stability after what feels like 12 months of hell. If that means living separate lives, so be it.” ■