By Thomas Oxnard
Photos by the author 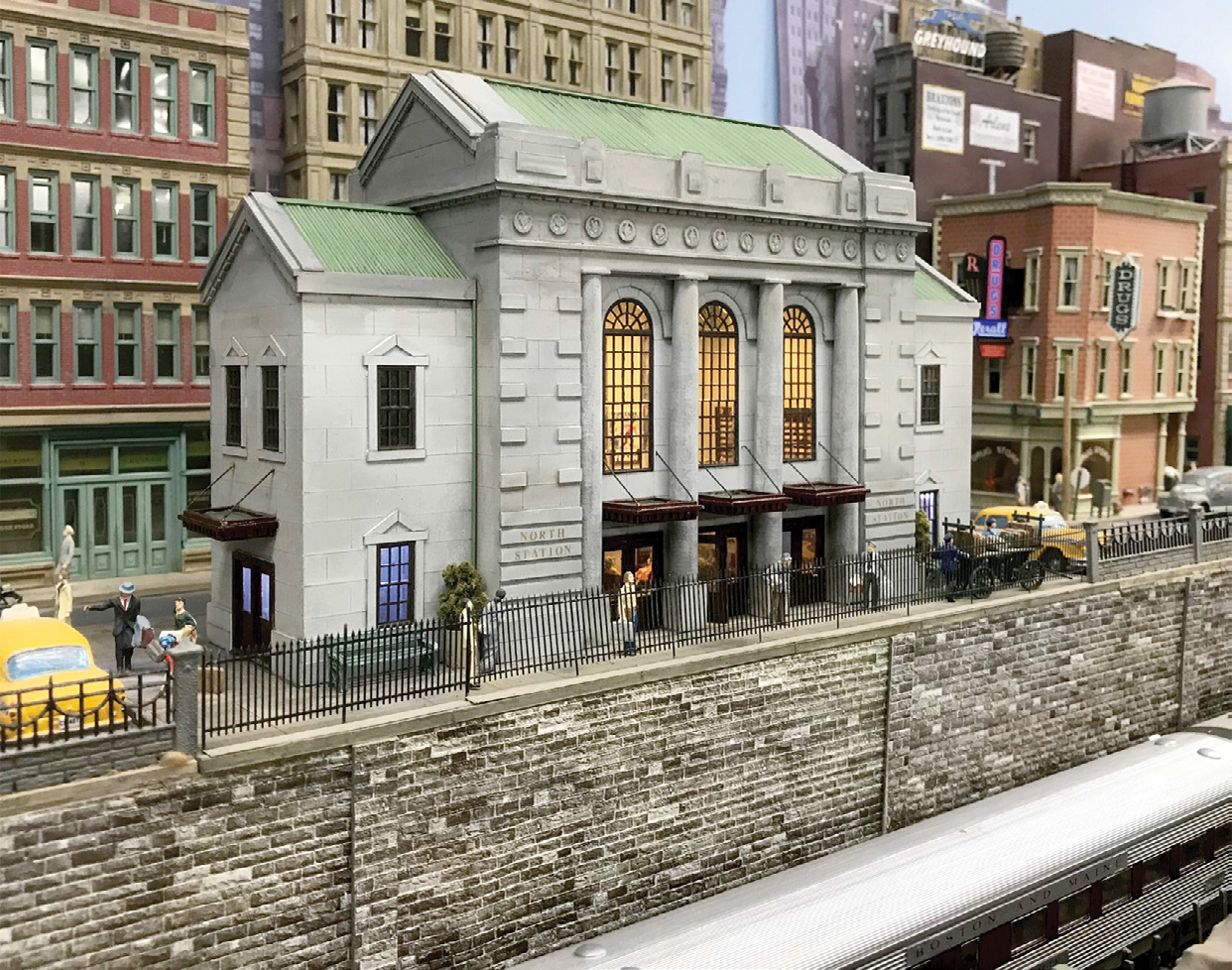 Thomas Oxnard built this freelanced station at Bristol on his HO scale Boston & Maine layout. The structure was inspired by Kansas City Union Station, which he was able to see out his hotel room window during a train convention (inset). 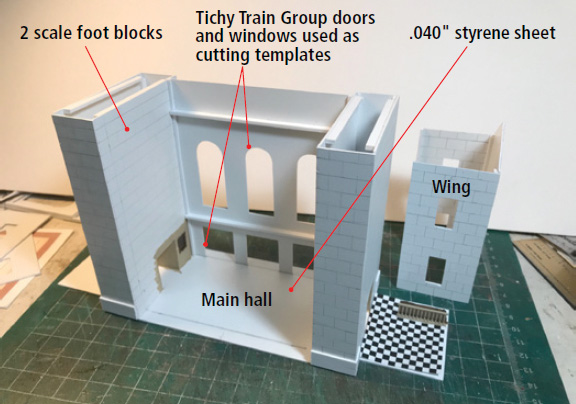 1 Getting started. Thomas primarily used .040" styrene sheet to scratchbuild the station. This photo shows the main hall and one of the wings.

2 Adding layers. To add relief to the station, Thomas laminated strip styrene to the sheet material. He used .040" sheet above the windows and assorted strip on the walls. 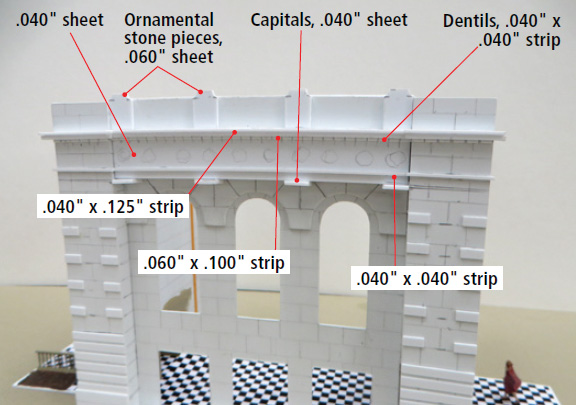 3 Trim on top. Thomas used more styrene sheet and strip to add details along the top of the station. The dentils are pieces of .040" x .040" strip with a scale 1 foot gap between them. 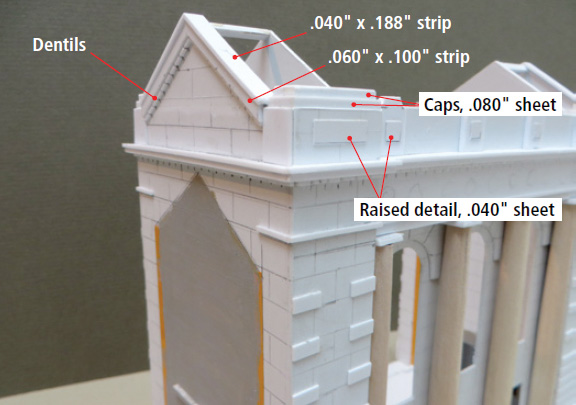 4 Detailed roof line. The peaks on the sides of the station were capped with layers of styrene strip and sheet. Thomas continued the dentil detail on the sides.

In 2018 I attended the National Model Railroad Association National Convention in Kansas City, Mo. Across the street from the convention hotel was Kansas City Union Station. The structure, opened in 1914, was designed and built in the Beaux Arts style. It was a hub for freight and passenger service. After a period of decline and closure, it was restored in 1999. Today, the station is served by long-distance and regional Amtrak trains and is also home to restaurants, museums, and a large ballroom for events and exhibits.

When I returned home to New Hampshire after the convention, I had new inspiration to work on my freelanced HO scale Boston & Maine layout. I felt Bristol (my version of Boston), the southern point of my railroad, deserved a new, grander train station. I looked at kits but didn’t find any that were the right size or had the architectural features I wanted. So I set about designing a freelanced station in the style of Kansas City Union Station. Since my station sits at street level and the trains come in below ground like they do in Kansas City, this was the ideal prototype to draw inspiration from.

Getting a lay of the land

Before designing the station, I measured the footprint of the space I had available. I tried to keep the overall proportions of the prototype, but had to compress the design. I wanted the large windows to show off the illuminated main hall interior, complete with signs, benches, passengers, ticket booths, and stairs to the platforms below street level in the wings.

My first design was good, but after making a paper mock-up of the structure from photocopied drawings, I felt I needed to make the station taller to better fit among the surrounding big-city structures.

The second mock-up fit well. I started with a .040" plain styrene sheet base that was 70 scale feet long and 22 scale feet wide. I again turned to .040" styrene sheet to build the two end boxes of the main hall. I then built the front and back walls with three arched windows above three double doors. I used Tichy Train Group 13-pane half-round windows (no. 8128), 20/20 double-hung masonry windows (no. 8036), and doubledoor and frame (no. 8192) as templates 1.

I scribed the walls inside and out with a hobby knife to represent 2 scale foot tall blocks of granite. I removed any burrs from the scribing process with 400-grit sandpaper.

I added a second layer of .040" styrene above the arched windows. To prevent warping, I braced the walls from the inside with styrene strip. At this time I glued the back wall in place, but not the front.

5 Do-it-yourself medallions. To model the decorative stone medallions, Thomas drew 7⁄32" circles on .015" styrene sheet. He made the crescent detail with a motor tool. 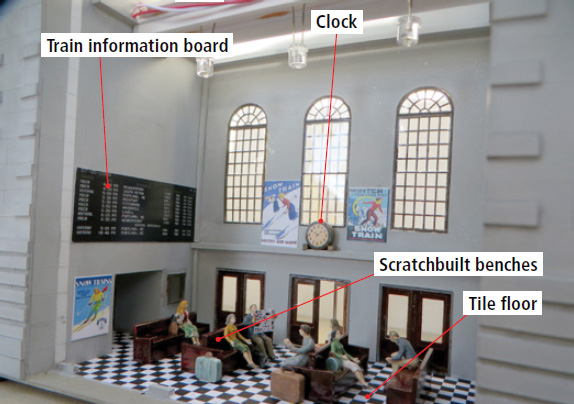 6 Interior details. The large windows made it possible to see inside the main hall. Thomas added benches, posters, figures, and a train information board, among other details. 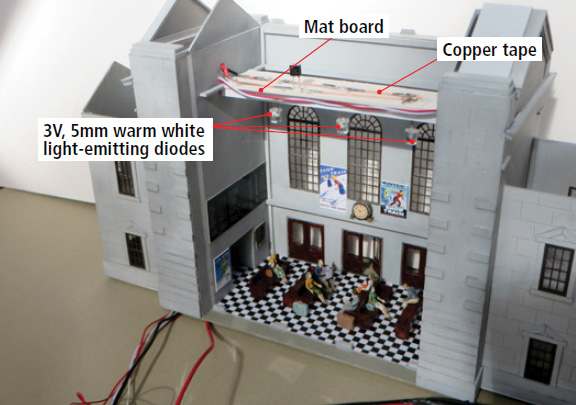 7 Light it up. The main hall is illuminated with 3V, 5mm warm white light-emitting diodes (LEDs). The LEDs are connected with 1⁄8" copper tape from Microlumina. 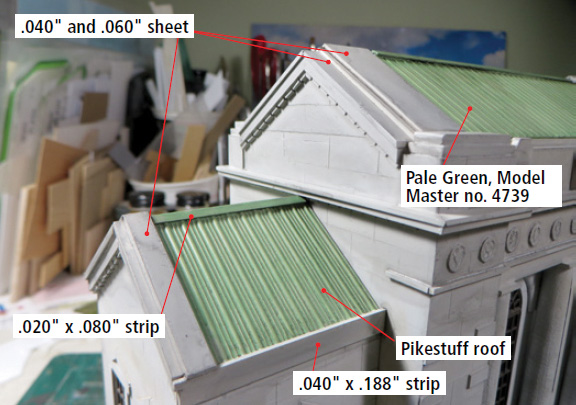 Each two-story wing measures 121 ⁄2 x 151 ⁄2 scale feet; the floor between is used as bracing. In the wings I added Tichy Train Group spindle rail (no. 8093) to suggest there are stairs leading to the platforms below. For the flooring I printed an image of 12" square black-and-white tile and attached it with 3M transfer tape. I added a ticket booth at each end of the hall.

I made the four columns from 5⁄16" wood dowels, tapered slightly on a table sander. I did the finish sanding by hand and painted the dowels twice to make the wood grain less visible. The 31 ⁄2-scale foot-tall square boxes (.015" styrene sheet) around the bottom of each column are open on the back.

I added four evenly spaced ornamental stone pieces to the top of the box, which I made from .060" styrene sheet. The ornamental pieces are aligned with the columns 3.

Kansas City Union Station has round decorative stone medallions across the facade. I replicated these by drawing 7⁄32" circles on .015" styrene sheet. I used a drill bit in a motor tool to draw crescent-shaped decorations 5.

I painted the windows Roof Brown. The sides of the wings feature Tichy Train Group two-lite doors (no. 8050). I trimmed and glued the castings together to make a double door. 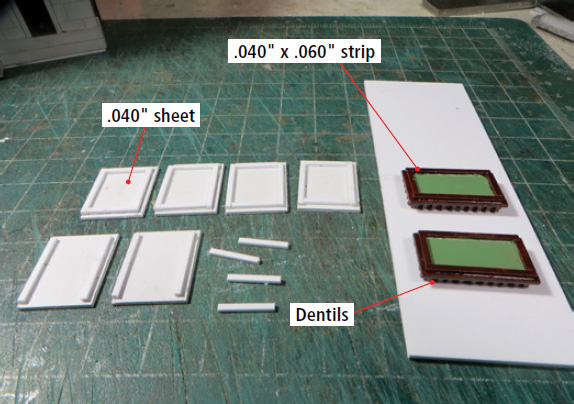 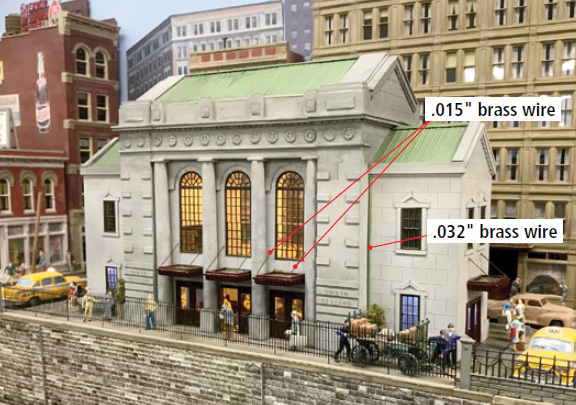 10 Supports and gutters. The canopy supports on the front and sides are .015" brass wire. Thomas used .032" brass wire for the downspouts.

The three main doors on the front and back walls are Tichy double doors with frame (no. 8192). I reversed the frame and put it on the inside of the hall. I painted the doors Floquil Roof Brown (Model Master no. 4884 is a suitable replacement for the discontinued Floquil color). Once dry, I applied Tamiya Clear Red (no. X-27). The translucent red, when applied over the brown, captures the look of mahogany.

I weathered the station with an India ink and alcohol wash as well as powdered pastels. The North Station lettering is Microscale Roman condensed alpha-numeric set no. 90033.

The large windows make it easy to see inside the station, so I needed to add interior details. I scratchbuilt the benches from styrene. I used the same technique as before to simulate a mahogany finish.

I also used more of the checkered tile floor in the main hall. I scaled down photos of posters promoting Boston & Maine snow trains and a train information board from Boston’s North Station to add interest to the walls. A clock is located above the center set of doors 6, opposite.

I used light-emitting diodes (LEDs) to illuminate the building. I installed bright white LEDs on the first floor of the wings. In the main hall I used three 3V, 5mm warm white LEDs mounted on mat board with styrene bracing underneath. The wiring is connected with 1 ⁄8" copper tape from Microlumina. All the wires travel across the ceiling and down inside the end wall to a single mini-connector 7.

If you’re looking to add a station to an urban scene, turn to the prototype for inspiration. Start with pictures of various stations and design yours using the features you want to replicate.

My new urban station is grander than the last one. It doesn’t look anything like North Station in Boston. But my passengers don’t complain, as long as the trains are on time.

Thomas Oxnard is a retired pediatrician who lives in New Hampshire with his wife, Sally. He earned his National Model Railroad Association Master Model Railroader certificate in 2015. Thomas’ other activities include skiing, golf, woodworking, painting, and enjoying eight grandchildren. His article “Building a brick switch tower” appeared in the May 2015 MR. ■