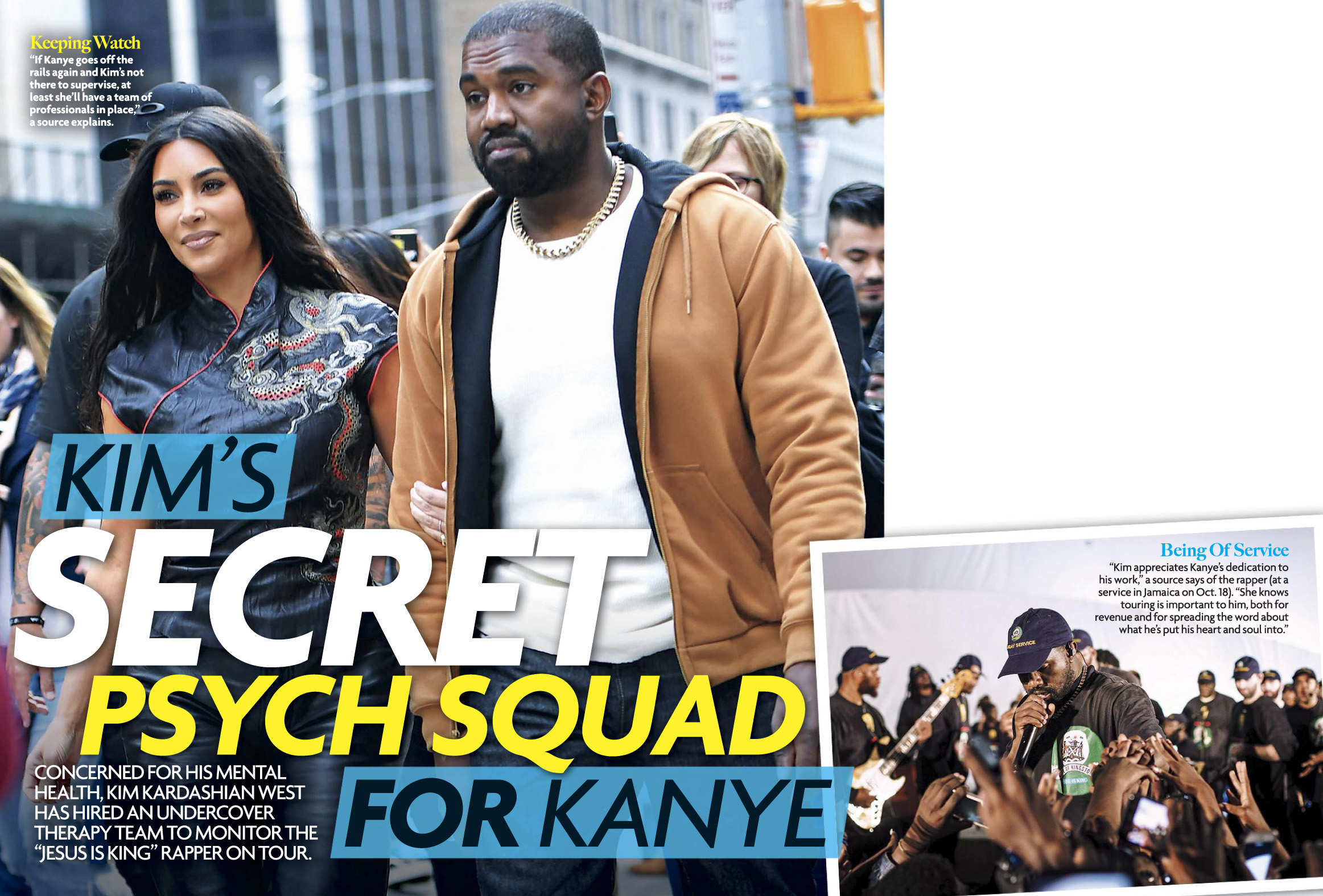 “If Kanye goes off the rails again and Kim’s not there to supervise, at least she’ll have a team of professionals in place,” a source explains.

“Kim appreciates Kanye’s dedication to his work,” a source says of the rapper (at a service in Jamaica on Oct. 18). “She knows touring is important to him, both for revenue and for spreading the word about what he’s put his heart and soul into.”

KANYE West’s Sunday Services are all about “healing,” his doting wife, Kim Kardashian West, recently told Elle. “It’s just a really healing experience with an amazing choir and amazing messages about love to start off your week.” But behind the scenes, the reality star, 39, is terrified about the rapper’s precarious mental health. And now that he’s announced that he’ll tour “right away” to support his new album, Jesus Is King, she and her mom, Kris Jenner, have gathered a secret team of pros to keep an eye on the 42-year-old, whose erratic behavior has raised concerns for the family. “Kanye will be being watched, even if he doesn’t know about it,” a source says. “They’ll report to her. She doesn’t want him losing his mind and will do anything she can to ensure that doesn’t happen.”

The dad of four has been open about his mental health issues. He was hospitalized in 2016 after the cancellation of his Saint Pablo Tour. He cited exhaustion at the time — but it was clear his mental health was fragile. Then in 2018, he made an infamous visit to gossip outlet TMZ, where he declared that “slavery was a choice” while wearing a MAGA hat. That October, he visited the Oval Office, where, lamenting a lack of “male energy” in his life, he declared that the MAGA cap made him “feel like Superman.” And at least one critic called his Sunday Services a grandiose “celebrity cult.”

Kanye tried to explain his mind-set in a May 2019 interview with David Letterman. “You’re hyperparanoid about everything,” he said. “Everything’s a conspiracy. You feel the government is putting chips in your head. You feel you’re being recorded. You have this moment [where] you feel everyone wants to kill you. You pretty much don’t trust anyone.” He went on to say how important taking medication is to maintaining mental health: “If you don’t take medication every day to keep you at a certain state, you have a potential to ramp up and… you can even end up in the hospital.” However, Kanye has also said his treatment doesn’t include medication; and in April, Kim told Vogue, “Medication is not really an option, because it just changes who he is.” Tellingly, she also noted that his being away from home had been a problem, explaining, “He doesn’t travel as much as he used to.”

No wonder she sprang into action when he announced his plans to hit the road. “The moment Kim heard about him going on tour, she and her mom pulled the trigger on this plan,” reveals the source, adding, “She and Kris have done this behind Kanye’s back. In many ways, he’s become like another child to her.” ■