END OF THE UNICORN 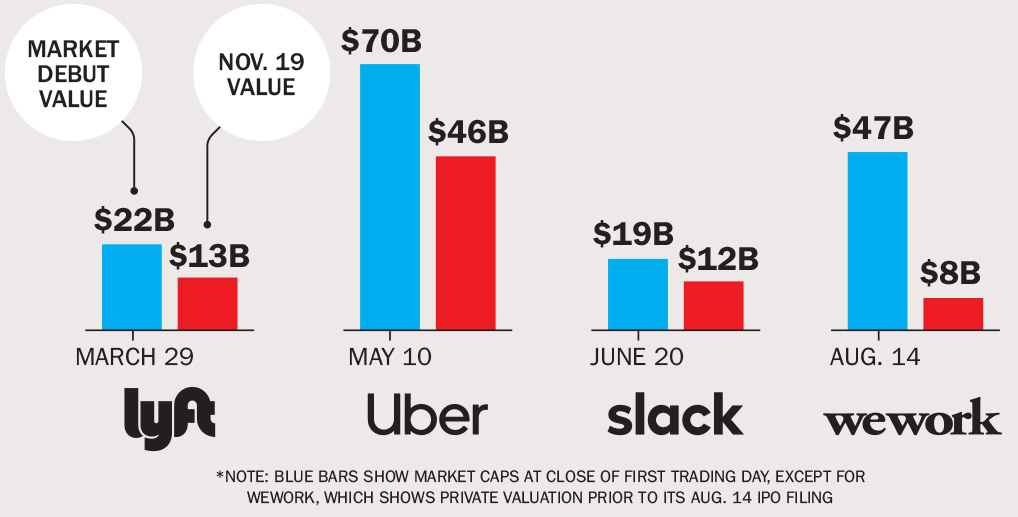 Not all unicorns fly high: some firms have lower market caps since going public this year; WeWork’s value tanked after it tried an IPO

WHEN THE RIDE-SHARING APP LYFT RANG THE opening bell at its IPO in March, pink confetti rained down on the trading floor, a reference to the company’s current pink logo more than its long-retired one: a furry pink mustache that sat atop drivers’ cars. The wacky mustache was emblematic of Silicon Valley’s live-for-the-moment startup culture, where entrepreneurs focus on quickly scaling their product to millions of people, prioritizing high user growth over immediate profitability. For much of the past two decades, consumer-tech companies have carried the mantle for America’s long-held obsession with entrepreneurs, lifting Silicon Valley and the tech industry to ever loftier heights in the national consciousness.

While enterprise software businesses like Box and VMware have steadily raked in billions by building collaboration tools, security solutions and IT infrastructure, it’s been the likes of Google, Facebook and, more recently, Uber, Lyft and Airbnb that have been the hottest places to work, the companies satirized on TV shows and the ones lauded (and, more recently, criticized) in the media.

This is why 2019 was to be the year of the “unicorns”—the IPOs of technology companies valued at more than $1 billion. The most anticipated were in the consumer-technology space, in particular Uber and Lyft. Close behind was the real estate company WeWork, which was never truly a tech company—but packaged itself as such, complete with an ambitious (some might say delusional) CEO and a soaring mission “to elevate the world’s consciousness.”

Over six months later, Uber and Lyft have shaved off more than a third of their opening share price. WeWork has postponed its IPO, and its CEO has been replaced by two new leaders, neither of whom seems to share their predecessor’s interest in building co-working spaces on Mars or housing the world’s orphans.

With the exception of Pinterest, the 2019 consumer-tech IPOs have been a disappointment. The unicorns aren’t profitable, and it doesn’t seem as if they will get there anytime soon.

Some have argued that consumer-technology IPOs have always gone this way. Google and Facebook both weathered notable bumps following their stock-market debuts. But it’s important to remember that both of those companies were younger and already profitable when they went public.

THE LATTER UNICORNS may yet prove the naysayers wrong. But for now, if there’s any relationship between the early consumer-tech IPOs and this year’s flops, it’s in the business philosophy that Google, Facebook and their peers inadvertently passed on to future tech company heads, who raised venture-capital money and ran their businesses on the idea that one should prioritize acquiring a huge user base over achieving profitability. If you get the users, the thinking has gone, profitability will figure itself out over time. For a while, it seemed even Wall Street bought into that philosophy—counterintuitive as patience might be to capitalism.

But in an era in which the cumulative years of “we’ll figure things out” seem inextricably linked to Big Tech’s lack of foresight around problems of privacy and security, market dominance and content policies, taking a bet on some of the newer unicorns may represent more risk than Wall Street can really bear.

The ride-sharing apps face the threat of regulation of their contracted labor force; WeWork, the reality that no matter how many cucumber slices you artfully arrange in a water jug, it’s hard to mask the dubious economics of renting short-term space to risky startup businesses.

But as drama has swirled the unicorns, the 2019 business-software IPOs have chugged forward in a more predictable fashion, and largely out of the limelight, including videoconferencing software company Zoom and the cybersecurity-focused CrowdStrike.

It’s hardly surprising. When you think about it, “move fast and break things”—the old Facebook mantra—is the kind of energetic, anticorporate philosophy that attracts fresh college grads, that emphasizes a break from the past and traditional ways. But for risk-averse Wall Street, a more dependable, if less inspirational, tagline might be “move fast and build reliable software that can be described in complicated B2B jargon and ensure profitability from day one.”

Consumer tech is far from dead, and Lyft, Uber and their peers could still pull things off. But don’t be surprised if the next big wave of successful IPOs aren’t “unicorns” but rather “paper clips”—a bit boring, perhaps, but based on reliable business software. Companies where business-model drama is a bug and not a feature.

Powell is the former head of communications for Google and the author of The Big Disruption: A Totally Fictional but Essentially True Silicon Valley Story ■