By Naina Bajekal
—
With reporting by
SANYA MANSOOR/NEW YORK 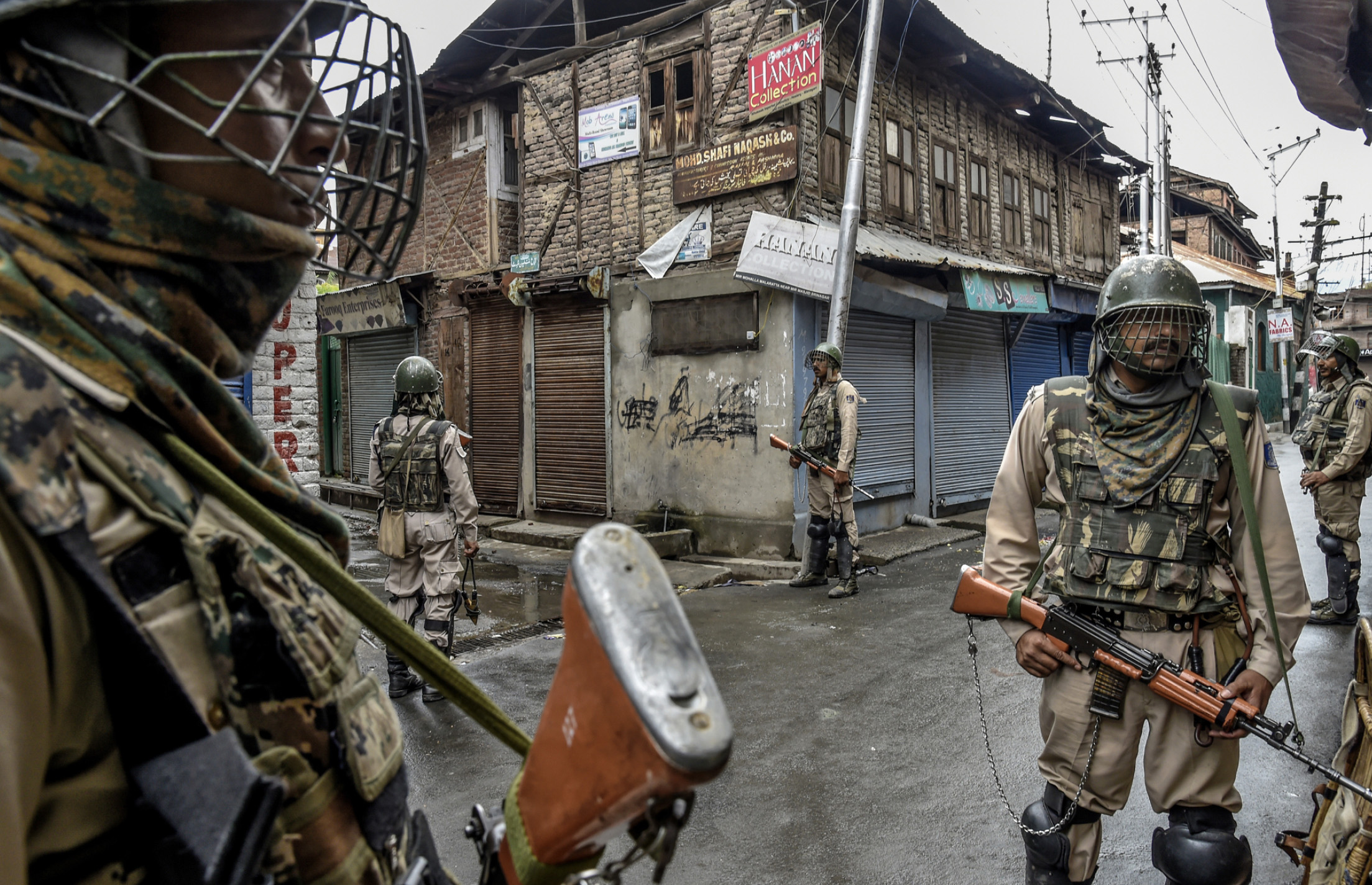 IT’S APPLE SEASON IN KASHMIR, BUT in orchards across the fertile Himalayan valley, unpicked fruit rots on the branches. Markets lack their usual bustle, most shops are open for only a few hours each morning, and schools and colleges are largely empty of students.

The slowdown reflects both the firm grip of the Indian government on the Muslim-majority state and the Kashmirian people’s seemingly spontaneous reaction to it. A tweet posted on the account of Mehbooba Mufti, the state’s former chief minister who has been detained for more than two months, read, “Kashmiris have been resolute about a civil curfew as a mark of protest.”

It was on Aug. 5 that Prime Minister Narendra Modi’s Hindu nationalist government said it would scrap the semiautonomous status that the state of Jammu and Kashmir had held under India’s constitution for seven decades. For the next 72 days, the Kashmir Valley and parts of Jammu endured a communications blackout, with landlines, cell phones and the Internet suspended. “Nine to 10 million people were pushed behind an iron wall. We’d never seen anything like this,” says Anuradha Bhasin, executive editor of the Kashmir Times, citing previous Internet blackouts that still left phone services intact. “There was an absolute silence.” Already one of the world’s most militarized regions, the Valley was flooded with thousands of Indian troops.

‘There’s a collective sense of fear, humiliation, hurt and anger. This will erupt in different forms.’

If the heavy-handed measures of the curfew were intended to dampen the threat of violence, they succeeded—at least for a time. But now that India has begun lifting restrictions on the valley, Kashmiris are bracing for what happens once the clampdown is over. In a Sept. 29 column, former Indian Supreme Court Judge Markandey Katju wrote that Kashmir would become India’s Vietnam War, a nightmare with “body bags” returning in large numbers. “Remove the restrictions, and popular protests will engulf the whole Valley. Continue them, and the pot will boil until it explodes.”

THE PROBLEMS IN KASHMIR have been shaped by colonial history, religious tensions and nationalism. During the partition of British India in 1947, the leader of Jammu and Kashmir pushed for independence rather than joining Muslim-majority Pakistan or Hindu-majority India. When Pakistan tried to take the territory anyway, Kashmir’s leader asked for help from India, which agreed—on the condition that Kashmir accede to India. What followed was the first of two wars that Pakistan and India fought over Kashmir. Today, both of the nuclear-armed countries claim the state as a whole; India controls roughly half the land, Pakistan controls less than a third, and China the rest.

Over the past three decades, Pakistan has also partially backed and funded insurgents in Kashmir, where India has responded with troops and brutal measures. A U.N. report in July noted serious abuses by Indian forces, including extrajudicial killings, torture and pellet-gun blindings. New Delhi dismissed the report as a “false and motivated narrative.”

Repealing Article 370 of the Indian constitution—which gave Kashmir autonomy in all areas except foreign affairs, defense and communications—was a long-standing goal of Modi’s party, which sees India as a Hindu nation and has long opposed rules preventing outsiders from buying land in Kashmir. Stripping the special status has seemed to rouse the party base. “For 70 years, Article 370 was proving to be an impediment in the way of the spirit of ‘one country, one constitution,’” Modi said to cheers during a rally in Maharashtra before local elections.

To Pakistan, the situation looks rather different. “The red line has been crossed on Aug. 5,” says Masood Khan, president of Azad (Free) Kashmir, one of two territories in Kashmir administered by Pakistan. A career diplomat who worked in Washington and Geneva as part of Pakistan’s permanent mission to the U.N., Khan grew up in Azad Kashmir and describes himself as a “son of the soil.” On a recent trip to Washington, D.C., he urged the international community to intervene and start talks with India. “We’re in a state of war,” he told TIME.

But while the rhetoric on both sides remains hostile, Pakistan can ill afford a full-scale conflict, analysts say. On Oct. 18, the Financial Action Task Force, the global terrorism-finance watchdog, ruled Pakistan would stay on its “greylist” until February 2020 as it was doing too little to tackle its funding of violent extremism. Pakistan was also bailed out by the IMF this summer for the 13th time in 30 years, inflation is predicted to surge, and the World Bank recently cut its economic-growth forecast. “There’s a realization that without an economy, Pakistan is not going to have a military,” says Gareth Price, senior research fellow at the London think tank Chatham House.

A greater security risk seems to be the anger and resentment simmering within the Valley. Nearly 4,000 people, including politicians, activists and journalists, have been arrested, according to a Sept. 6 government report seen by Reuters, and thousands remain in custody. On Sept. 24, the National Federation of Indian Women highlighted claims that 13,000 boys had been picked up and detained, some for up to 45 days. “These incidents instill a fear that goes very deep,” Bhasin says. “Kashmir is not a monolith; there will be a creative response, a peaceful response—and a violent response.”

A rise in homegrown terrorism in the Valley is highly likely, Khan suggests. “There’s lots of anger there. It is sharp and fierce,” he says. “But when people are defending their homes against Indian attacks, we don’t call it militancy. We would call them freedom fighters.”

Violence has already risen as India dismantles the “iron wall” in Kashmir. Cell-phone services were restored on Oct. 14 (the Internet is still restricted), but peaceful protesters are still being arrested. On Oct. 16, five were killed: two civilians, in attacks by suspected militants, and three alleged rebels, by Indian forces. Four days later, shelling on both sides of the boundary between India-administered Kashmir and Pakistan-administered Kashmir led to the deaths of at least nine soldiers and civilians.

THE REPEAL OF ARTICLE 370 “opens the door to rejuvenate a moribund economy,” the Indian ambassador to the U.S. wrote in a September New York Times column. But the clampdown has hit hard; the Kashmir Chamber of Commerce and Industry estimates the shutdown has already cost the region over $1.4 billion. Although tourists are now allowed in, the precarious security situation means the tourism and handicrafts sectors are unlikely to bounce back fast. Classes have not resumed at many schools and colleges. “We are helpless. I want to teach, but I can’t teach,” says a 46-year-old professor, who asked for anonymity out of safety concerns. “For some, it feels criminal to go to school and study because there’s so much anger and resentment.”

And Kashmir’s $1.5 billion apple trade, which employs more than 3 million people, suffered during the blackout, which cut traders off from buyers. Now, militants are targeting apple sellers, pickers and drivers; within three days in October, two people were shot and another injured in two insurgent attacks on the apple trade.

Yet the violence in the Valley hardly represents a significant escalation, says Ajai Sahni, executive director of the Institute for Conflict Management in New Delhi. “Kashmir has been a theater of terrorism for over 30 years, and the idea that the government’s recent moves were going to bring violence to an abrupt and sustainable end was visibly absurd,” he says. Ultimately, he adds, a long-term political solution is needed, one that allows the people of Kashmir to address their grievances.

On Oct. 11, the state government took out a full-page ad on the front page of the newspaper Greater Kashmir. “CLOSED SHOPS, NO PUBLIC TRANSPORT? WHO BENEFITS? Are we going to succumb to militants? Think!!!” it pleaded. But most Kashmiris are not returning to business as usual, either too afraid of violence or determined to disobey New Delhi. “There’s a collective sense of fear, humiliation, hurt and anger,” Bhasin says. “The natural fallout is that this will erupt in different forms. The only question is when.” ■