Features
Home comforts
Cutting-edge tech is reshaping the fitness industry, giving rise to a new digital wave of home workout enthusiasts. It may be more convenient and time-efficient, but will living rooms ever truly replace gym floors? 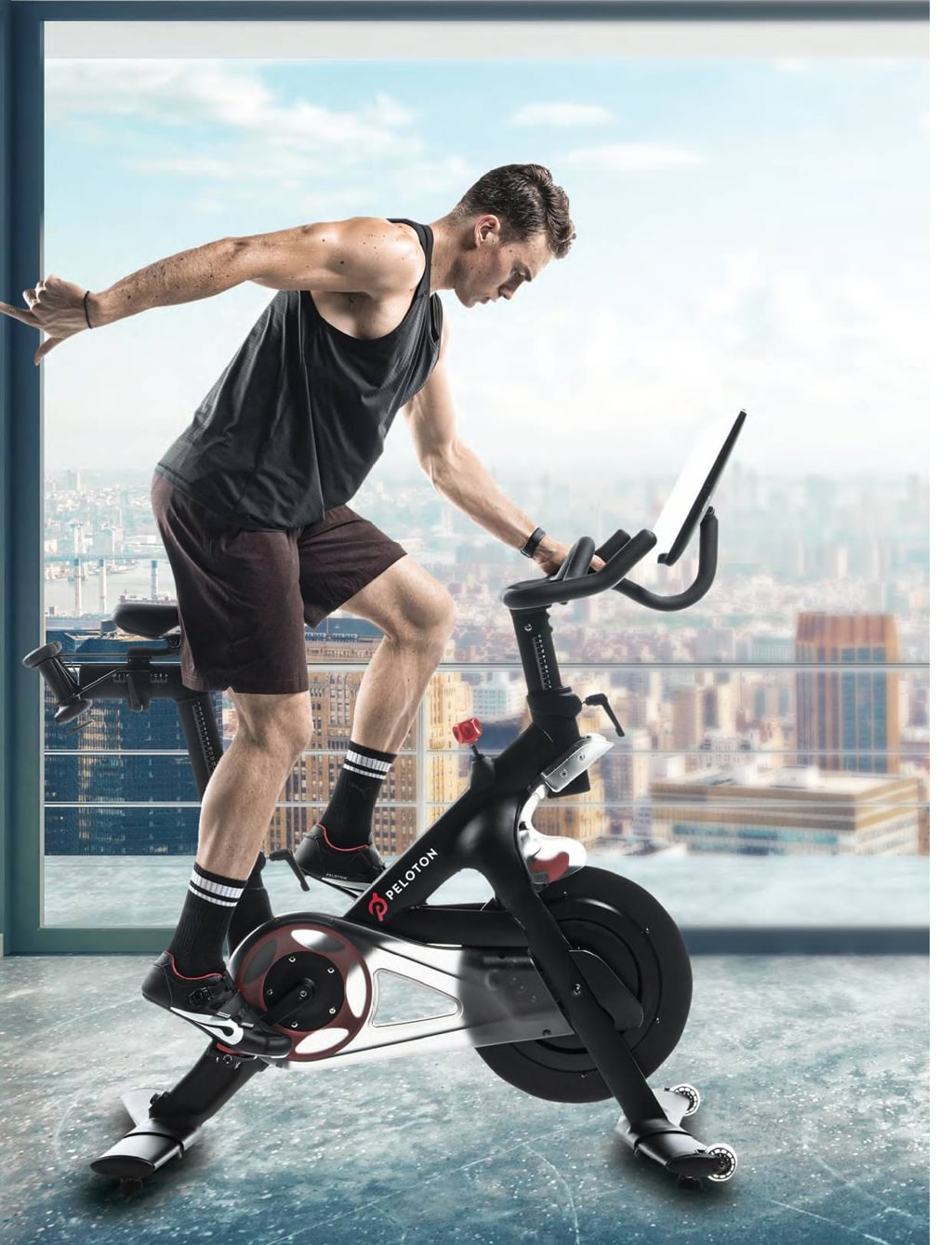 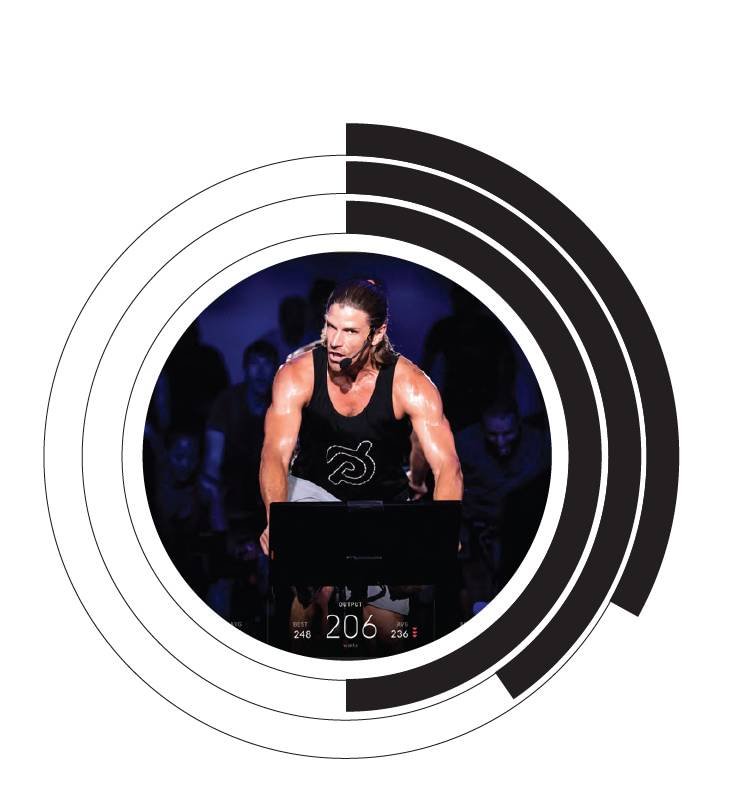 Training at home has come a long way.

In the analogue age, it meant gentle stretches and grainy VHS workouts. The past decade saw the dawn of fitness apps and wearables. But even then, domesticated workouts would typically be limited to following YouTube videos, lifting rickety dumbbells and trying not to bump your head on the ceiling while attempting a pull-up. It’s only now that home training is truly at the sophisticated stage. From live workouts beamed to TVs, to digital kettlebells and immersive, on-demand indoor cycling classes, technology is moving the gym into the household, buffing up couch potatoes and upgrading phones into virtual PTs.

And the digital fitness boom is packing serious muscle, making up an ever-growing chunk of the billion-dollar fitness industry. “This is only the start,” says Sammi Adhami, co-founder of training innovators Fiit. “Accessibility for everyone – at home, in the office or on-the-go – is the future of fitness.”

Rise of the machines 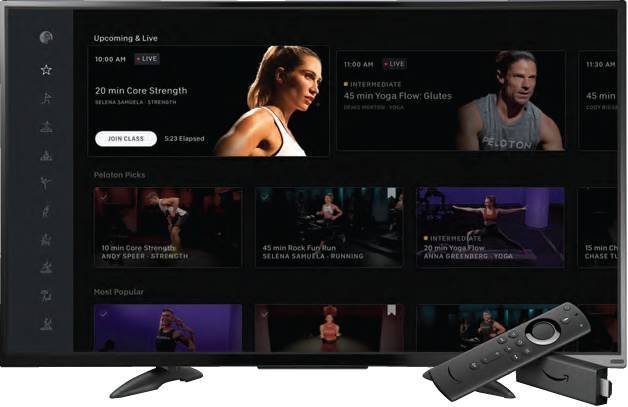 Fiit is among the top-rated fitness apps, offering 25- and 40-minute classes in HIIT, strength training, combat, yoga, mobility, Pilates and breathwork. Classes are broadcast live from Fiit’s UK studio, delivered by trainers that include celebrity coach Tyrone Brennand and karate champion Sean Kazab. Beamed to phones, tablets and TVs, users in living rooms across the world can compete on an interactive leaderboard, with points scored based on exertion and heart rate.

Since its April 2018 launch, Fiit has been downloaded 200,000 times, with more than 700,000 workouts clocked. All classes remain available to stream on demand, like a fitness Netflix. On average, its active users complete three workouts per week. “Even if someone picks it up and uses it twice a month, that’s fine,” Adhami explains. “The average gym-goer goes only 13 times a year.”

Accessibility is a key selling point for workout apps. Membership for the likes of Sweat, Freeletics and Les Mills can set you back just $20 per month. The average gym membership costs $65. Rolling out of bed and hitting an app is also a lot more convenient and stress-free than dashing to the post-work weights room and praying there’s a free squat rack. There’s no need to hold on to a bench for dear life, or be squeezed out of a 6.30pm class by the sheer weight of numbers.

The digital gym encompasses more than classes and convenience, though: it boasts some nifty gadgets, too. Devices no longer necessarily mean excessive screen time and “tech neck”. Phones and wristwatches now notify us to get off the lounge, breathe more deeply and get moving. Integrated tracking apps count our steps and calories. Specialist tech like K’watch and iHeart can monitor lactic acid and internal ageing. For DIY exercise enthusiasts, it can mean expert, tailored data without having to open the front door.

Then there are the premium gadgets. Peloton’s connected stationary bike – which costs a cool $2200 – brings the sweaty energy a spin . Users can studio workouts, compete on a leaderboard and ride offline. There’s also a separate app featuring live yoga workouts, marathon training and bootcamp sessions.

“We describe it as boutique fitness with a half-metre commute,” says Kevin Cornils, Peloton’s international managing director. “Fitness is moving into the home.”

Cornils describes Peloton as being a “technology company first and content second”. It follows a wider trend. Many Silicon Valley giants – the likes of Apple and Google – have their own health-tracking platforms, which integrate seamlessly with people’s everyday lives. Even video game companies are getting in on the act: Nintendo’s Ring Fit Adventure is an action RPG where an evil bodybuilding dragon is defeated by the player running on the spot, adopting yoga-like poses and generally flailing their arms about. 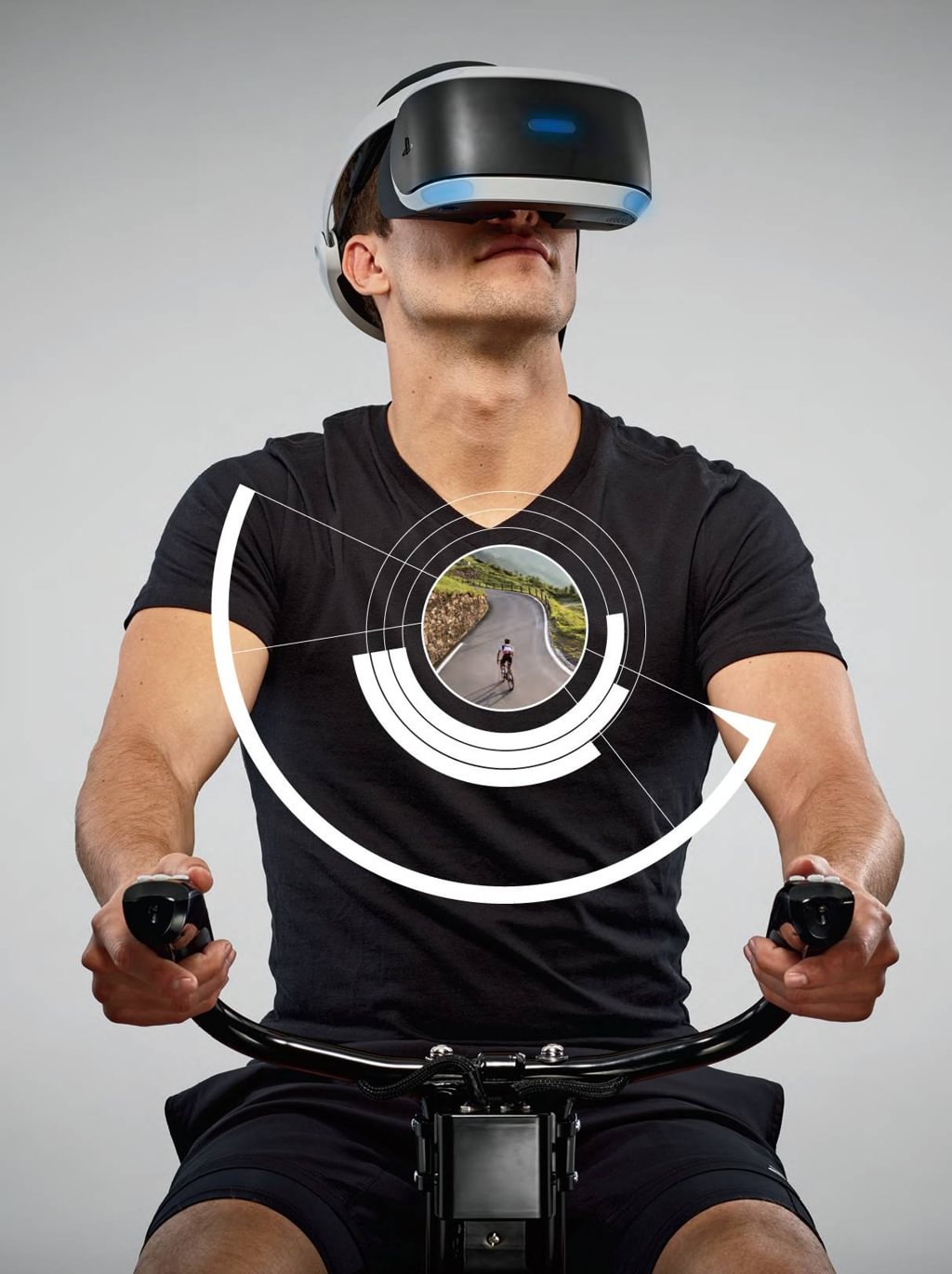 “Accessibility for everyone – at home, in the office or on-the-go – is the future of fitness.”

But it’s increasingly becoming a two-way street: gym brands are moving towards smart technology and connectivity. Technogym – known as a supplier of cable machines, treadmills and rowers – has come up with Biocircuit, which harnesses aerospace tech to personalise workouts across connected equipment. No more breaking stride to change resistance. 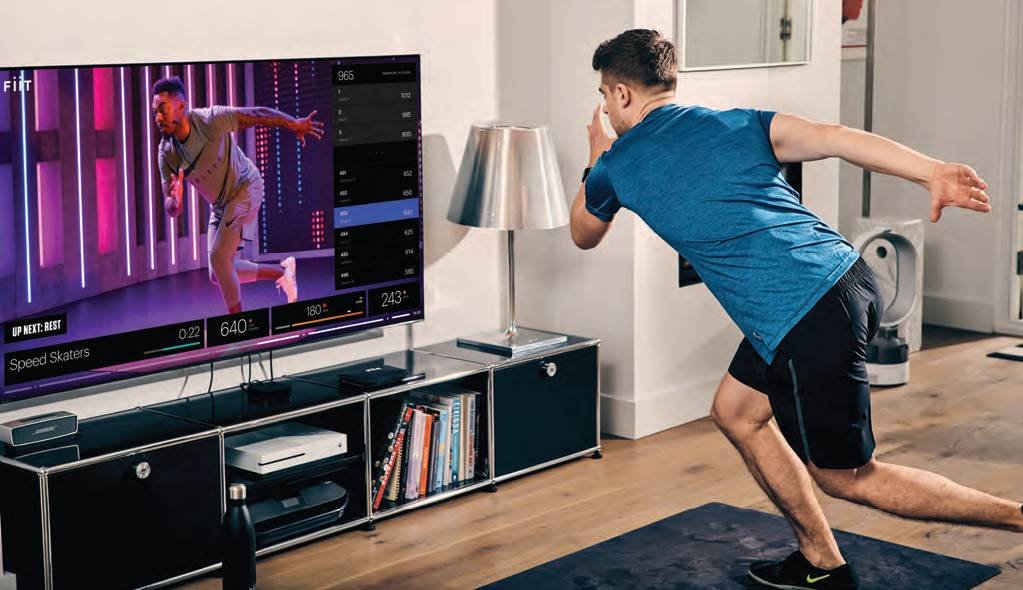 Fiit has been dubbed the “Netflix of fitness”.

Space-age gadgetry, live Ibiza-style super-club spin classes and dedicated strength sessions delivered by renowned trainers – all without having to change out of your pyjamas. The digital gym has no walls: it spans oceans and continents and encompasses kitchens, offices and parks. So, why would anyone bother travelling to work out in a single dedicated space that may well charge an annual four-figure sum for entry? The answer lies with a common theme in nearly all workout apps: they feature leaderboards. “We’ve found that people work 22% harder in a competitive scenario than in the on-demand classes,” Adhami says. It turns out that the best way to instantly boost your workout is doing it in a live, social space. That’s something every mainstream gym provides – experience apps can only mimic via digital lobbies and online communities.

It goes deeper than simply unleashing your competitive streak, Top Gun-style, in a Tuesday night kettlebell class. The gym is a social hub for many: an oasis distinct from home and work, where you can leave your everyday stresses behind and refresh your mind, body and soul. Apps like Sweat and Fiit are a great idea – but they can never replicate real human interaction.

As fitness moves more and more online, with trainers now delivering classes into cameras, the gym’s human element becomes a precious commodity. “My chief argument against home workouts ever replacing the gym is the coaching process,” says master trainer Luke Barnsley. “From first-timer to seasoned pro – everyone needs to be coached. It’s a process still far superior when done in person.”

One-on-one or in a class setting, a (live) coach can also correct form, tailor workouts and potentially prevent injuries down the line. For a trainer staring down a camera lens, their workout live-streamed hundreds of kays away, that’s impossible. So, is there a greater risk of pulling a muscle, or spraining an ankle, while training at home?

Without being able to physically correct someone’s form, verbal coaching cues become paramount. “If you can afford a trainer, great, they’ll be looking at you all the time,” Adhami says. “But in a group class, the instructor might come and talk to you twice, max. We have warm-ups and cool-downs in every class, plus tutorial videos to give you that PT in your pocket.”

While workout apps feature strength classes, you’re limited by your equipment at home. And it’s going to cost you a small fortune – and a whole lot of space – fitting out your living room with dumbbells up to 40kg. Unless you have a spare garage, you’re going to struggle with any compound lifts or cable machine workouts at home.

There’s a deeper, gendered factor at play here, too: the typical male gym-goer lurks in the weights room. Group exercise classes – be it boxing, Zumba or even strength – are predominantly female. It’s a trend that follows at-home fitness apps. Adhami says that only 13% of Fiit’s workouts have been done by men.

Men also tend to lag behind when it comes to new fitness trends and technologies. “Our early adopters have tended to be busy parents,” adds Adhami. “Particularly mums and female millennials – they follow influencers on social media.” For better or worse, most men train to lift heavy – and they do it alone. The best place to deadlift a personal best? It’s still very much your old-school gym.

Training for the future

For busy parents or anyone living away from the convenience of the city, digital training brings boutique, studio exercise into the home. It’s certainly more convenient and hassle-free than the gym, but that definitely doesn’t mean it’s a direct replacement. Look towards the fitness epicentre of Los Angeles and there’s a growing trend for holistic, movement-focused exercise: low-impact training like the Lit Method and Lekfit. It’s set to be a big part of fitness in the 2020s.

Workouts that safeguard the body against the rigours of modern life, while adding a healthy dose of variety to the gym routine? You can find them on countless at-home fitness apps and gadgets. “There’s more to training than just bench pressing all day, and more and more men are slowly realising that,” Adhami says. “It’s about complementing your routine, not competing against it.”

Whether it’s spin, yoga or kettlebells, every digital workout is beneficial to men, too. Adahmi explains that he uses Fiit five times a week in training for Ironman. “Whether it’s stretching, working out at 5am or 10pm, I have a class. There’s such a variety. At the gym, without a trainer, people tend to do the same thing over and over – and the human body is very good at adapting and not progressing. Variation is key.”

Digital training won’t ever replace the gym, but it will take over more and more households. Cornils compares it to the film industry and the shift from cinemas to TVs. However, just as there are those who still happily pay to watch a blockbuster on the big screen, there will be many who will use their at-home workout app one day, then travel to the gym the next. “More and more are getting their training online,” says Barnsley. “But it’ll never replicate the blissful escape that a trip to the gym provides.” ■