IN THIS ISSUE
/ dwellings
The Big Reveal
A boxy revamp of a Los Angeles bungalow opens to an unexpected outdoor living space.
TEXT BY Kelly Vencill Sanchez
PHOTOS BY | @HUNTERKERHART Hunter Kerhart “A conglomeration of boxes around a bit of a pitched roof” is how creative director Mark Motonaga of RCH Studios describes his transformation of a 1920s Los Angeles bungalow for himself and artist Guy Clouse. Inverting the traditional layout, he set the private rooms in the front and a large, open living area in the rear. With an eye to sustainability, the couple replaced the existing concrete with gravel on the path to the entrance courtyard.

Mark Motonaga and Guy Clouse’s home might be smack dab in the middle of Los Angeles’ vibrant East Side, but it feels like a secret hideaway. Steps from a street lined with apartment buildings, modest older homes, and commercial warehouses, the house, with just a single window on the front facade, looks inward, becoming more open as you move through it to the surprisingly lush backyard.

The 5,400-square-foot property, on the edge of the Atwater Village neighborhood, was in foreclosure when Mark, the creative director of L.A.’s RCH Studios, and Guy, an artist, first saw it. After living in a Hollywood Hills apartment for more than a decade, they wanted something on one level, but with an industrial, loft-like feel. They also longed for a garden. The couple considered replacing the run-down 1920sera bungalow on the site, but then Mark—part of the team that transformed the L.A. Terminal Market and surrounding area into ROW DTLA—came up with a plan to fold it into a new design. They stripped down the house to the studs and added boxy volumes at the front and the back, in a way that suggested additions built over the years. The renovation brought the square footage to its current total of 1,500. 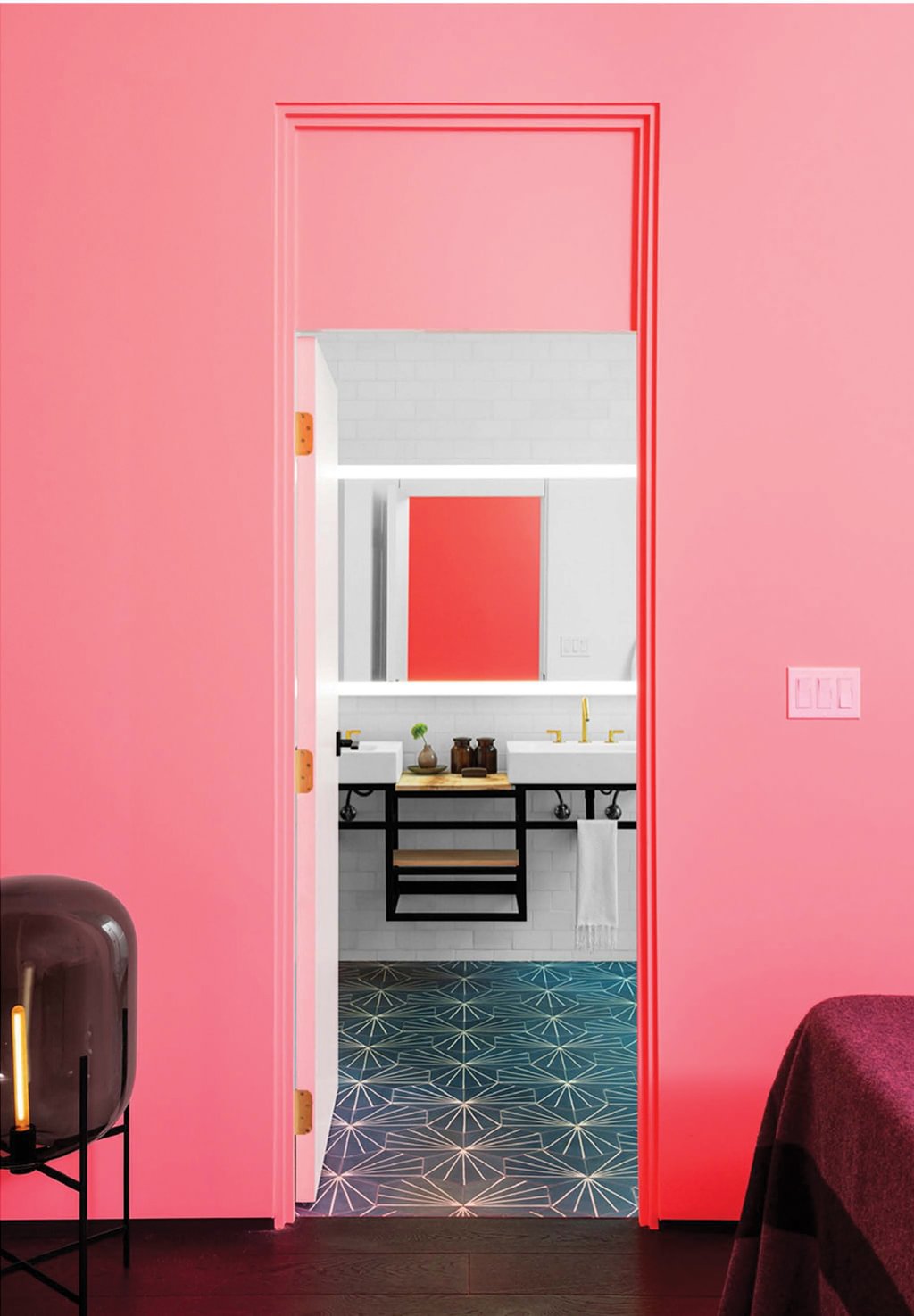 From the street, glimpses of the original pitched roof peek out from between the new sections. The entrance path brings visitors through a large portal and into a side garden. A second opening leads down a few steps, where the pool is visible through a canopy of trees—one of the property’s several “framing moments,” as Mark calls them.

Rather than use a traditional layout, he set the public areas in a generously proportioned, windowed space at the rear and the bedrooms and bathrooms at the front. Three sets of steel-framed French doors lead from the side garden into a highceilinged, open-plan expanse containing a chef’s kitchen and a living/dining area. Shadows play on the long wall opposite the entrance, which shifts throughout the day from teal to dusky blue. In the afternoon, light reflects off the pool, enters through the windowed rear wall, and dances on the ceiling. “We wanted to explore indoor/outdoor living in a different way,” Mark says. “And because we have only five rooms in the whole house, we created a series of layered experiences that hopefully make it seem bigger.” A sofa by Stephen Kenn Studio joins ceramic tables by artist Ben Medansky in the glasswalled living area. The AIM pendants are by Ronan and Erwan Bouroullec for Flos and the Oda floor lamps are from Pulpo. The metal artworks are by Guy. Hardwood floors throughout are from Bois Chamois.

“We wanted to build on the idea of a borrowed view. Because of the layered foliage, everything feels like it’s on our property, but it’s not.”
MARK MOTONAGA, DESIGNER AND RESIDENT 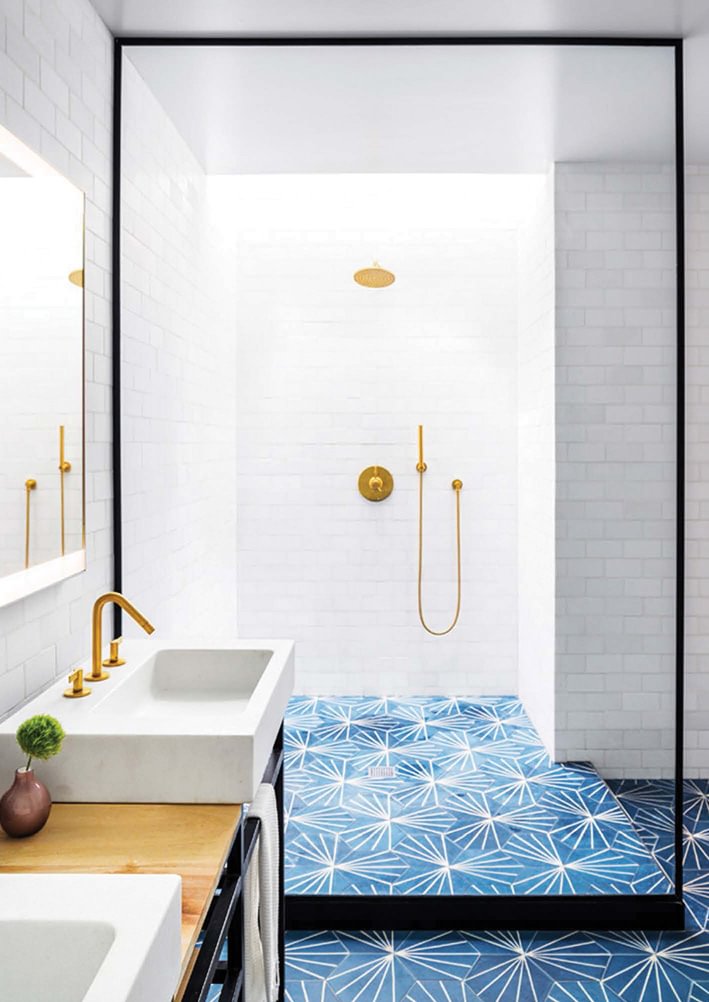 In the skylit master bathroom, Dandelion tile from Marrakech Design is paired with tile from Ann Sacks.

The couple has assembled furnishings by local artisans like ceramicist Ben Medansky and furniture designer Stephen Kenn, while large canvases by artist friends lean against the wall alongside Guy’s weldedwire creations. Covered in plate brass, the kitchen island has been allowed to patina and stain. “Just like the leather on the sofa, we wanted it to be a bit schlubby,” says Guy, who oversaw the interiors. “It’s so easy to get everything taut and clean, but then you can’t really live with it.”

Where the main room is all jewel tones, the master bedroom is bathed in a luminous peony-pink. “I suppose people could have an aversion to pink, but it’s nice to wake up in this enveloping glow,” says Guy. For the master bathroom, he selected patterned Moroccan and glazed white tile. The fixtures are by California Faucets. Tweak sits at the brass-clad kitchen island on a Ghost stool by Philippe Starck. The wall paint is Tucson Teal by Benjamin Moore. (ILLUSTRATION: LOHNES + WRIGHT)

Guy, an avid gardener, also collaborated with Mark on the landscape, which combines native grasses, bay laurel hedges, and sycamore and crape myrtle trees. “A lot of people like to plant their gardens so they don’t change with the seasons,” he says. “But it slows down life to have a deciduous garden—it makes you more mindful of time.” The landscaping extends to the pool surround. “Even though the pool is rectilinear, we imagined it as a pond, so we pulled the native grasses right up to the edge,” says Mark.

Mark and Guy finally have their loft and garden in the city, one that’s as much a respite from daily life as a reminder of nature’s constant changes. “Being on a small lot in an urban setting can be limiting,” says Mark. “But we’ve created space for ourselves. It’s very serene.”