Departments
/ MILESTONES
Fall of the Reich: The Red Army Takes Berlin
At the end of a brutal campaign in spring 1945, the Soviet Union’s forces barreled into Berlin, the last refuge of Nazi Germany. Taking this city would be the final step for securing victory for the Allied powers and ending World War II in Europe. VICTORY OVER GERMANY In one of the war’s most iconic images, Soviet soldiers raise their flag over the ruins of the Reichstag, Berlin, on May 2, 1945. (YEVGENY KHALDEI/GETTY IMAGES)

By spring 1945 World War II had been raging in Europe for more than five years. Years of brutal battles resulted in massive losses of human life and destruction of towns and cities. Since 1941, the Soviet Union had been fighting Germany in eastern Europe, losing millions of soldiers as they repelled Hitler’s invasion of Soviet territory.

In June 1944 successful Allied invasions in France allowed U.S. and British forces to capture German territory and press the Axis powers back. At the same time, the Soviets, led by Premier Joseph Stalin, began their campaign in the east. Over the year, the Red Army marched toward Berlin, intent on the destruction of Nazi Germany.

Soviets on the March

On June 22, 1944, three years to the day after German troops invaded Soviet territory, the Red Army launched Operation Bagration, a massive offensive on the eastern front aimed primarily at annihilating Army Group Center, the once mighty Nazi force that had reached the outskirts of Moscow in 1941 during Hitler’s Operation Barbarossa. Having since recaptured from the Germans nearly all the ground held by the Soviet Union before the war began, the Red Army now advanced into areas that Joseph Stalin had annexed following his ill-fated pact with Adolph Hitler in 1939, including the Baltic states and Belarus, a borderland long disputed by Russia and Poland.

Deceptions indicating a Soviet offensive to the south around the Black Sea left Germans to the north exposed when nearly 1.5 million Soviet troops attacked. Hitler made things worse by not allowing forces caught in that onslaught to withdraw until it was too late. The German Fourth and Ninth Armies were decimated as Soviet pincers closed around them at Minsk. The Third Panzer Army was hard-hit as well. Russians then advanced into German-annexed Poland before halting to regroup in August at the Vistula River near Warsaw, where a determined uprising by Polish partisans against German occupation forces was eventually crushed.

The Red Army did not renew its offensive in Poland and take Warsaw until January 1945. In the meantime, Russian troops made great strides to the north—where they advanced from the Baltic states into East Prussia—and momentous gains to the south, where they invaded Romania and other nations allied with Germany. After Soviets seized the Ploesti oil fields and denied their output to fuel-hungry German forces, King Michael I of Romania ousted that country’s pro-Nazi dictator, Ion Antonescu, and yielded to Russia. Bulgaria switched sides as well, but German troops kept Hungary from leaving the Axis until Budapest fell in February 1945. By then, Russians were poised to deliver the deathblow to Hitler’s regime in Berlin—and dominate Eastern Europe for decades to come. 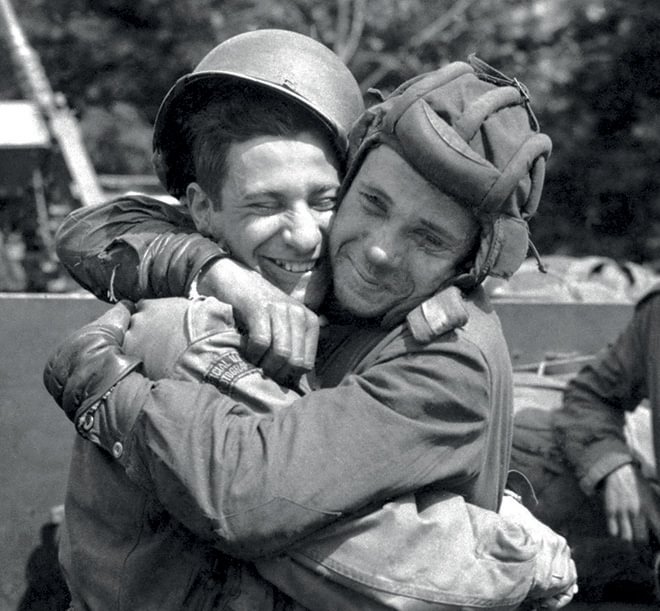 A SOVIET SOLDIER EMBRACES AN AMERICAN SERVICEMAN NEAR THE ELBE RIVER IN APRIL 1945. (AP IMAGES/US ARMY)

Stalin had a strong hand to play when he met with U.S. president Franklin Roosevelt and British prime minister Winston Churchill at the Crimean city of Yalta in February 1945. Recent advances by the Red Army had positioned Soviets to occupy eastern Germany while American, British, and French troops occupied western Germany. Separate occupation zones for those forces were drawn up at Yalta along with postwar plans to divide Berlin, which was situated in the Soviet zone but would be partitioned among the Allied powers.

Left unresolved was who would capture Berlin. After General Eisenhower’s U.S. troops seized the Ruhr in early April, armed opposition wilted in western Germany but persisted in the east, where Russian soldiers enraged by the brutal German occupation of their homeland were raping German women and committing other atrocities. Millions of German civilians in the path of the Red Army were evacuated or fled westward on their own initiative to escape the Soviet occupation zone.

The Fall of Berlin

The final battle in the savage struggle between Germany and Russia opened before dawn on April 16, 1945, when Soviet artillery along the Oder River unleashed a thunderous bombardment that reverberated 40 miles away on the outskirts of Berlin. German troops had pulled back to avoid that pounding and held firm initially. But they could not long withstand onslaughts by the First Belorussian Front under Marshal Georgi Zhukov, hailed as the savior of Moscow, whose numerically superior forces now bludgeoned their way toward Berlin.

“They keep coming at us in hordes, wave after wave,” reported a commander in the depleted German Ninth Army, mauled at Minsk the year before. “My men are fighting until they run out of ammunition,” he added. “Then they are wiped out or completely overrun.” To the south, Marshal Ivan Konev, commander of the First Ukrainian Front, shredded the Fourth Panzer Army before pivoting toward Berlin to compete with Zhukov for that prize. “Whoever reaches Berlin first,” said Stalin, “let him take it.” Zhukov had a shorter path to the city and won the race, but Konev’s swift advance drew a noose around the capital. V FOR VICTORY Members of the public and armed forces celebrate Victory in Europe Day in London in May 1945. (BETTMANN/GETTY IMAGES)

On April 26, a half million Soviets launched a furious assault on central Berlin, site of the Reich Chancellery—under which lay Hitler’s bombproof Führer-bunker—and the nearby Reichstag, the old German parliament building, abandoned after an arsonist set it ablaze in 1933 and Hitler seized emergency powers. Berlin’s last-ditch defenders, including Waffen-SS units and civilians of the Volkssturm, a people’s militia made up largely of boys and old men, were outmanned and outgunned. Many fought to the bitter end in subway tunnels and streets as the city became a funeral pyre for the Reich and the leader who drove it to ruin.

On April 30, Adolf Hitler committed suicide while holed up in the Führer-bunker; his body was cremated by aides. That evening, Soviet troops fought their way into the Reichstag and raised their red flag over the smoldering capital. German forces conceded defeat on May 2, 1945. Five days later on May 7, 1945, Grand Adm. Karl Dönitz, left in charge of the doomed Reich and its shattered armed forces, signed a formal unconditional surrender to the victorious Allies.

News of the surrender spread quickly, and “Victory in Europe Day,” or “V-E Day,” celebrations erupted all over the world. In Britain and the United States, jubilant crowds gathered in city streets and squares on May 8, while in Soviet states, their victory dance came on May 9.

Hitler had once proclaimed his Reich would last for a thousand years. It stood for only 12—thanks to the sacrifices of millions of people who gave their lives in the brave fight against the Axis powers. 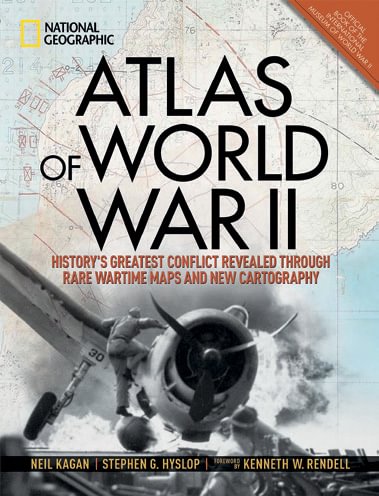