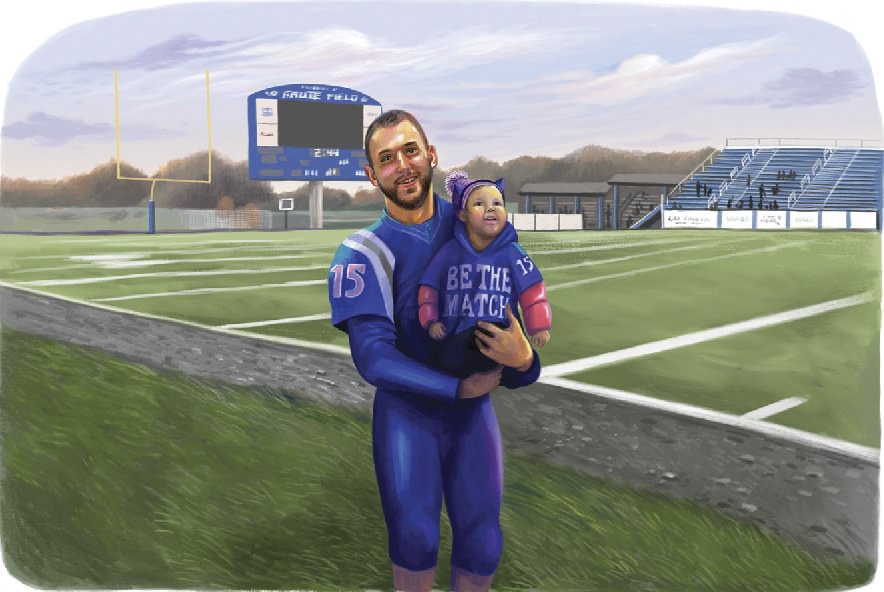 WHEN MIKE MUSHAW swabbed his cheek to join the national bone marrow registry nearly three years ago, he never really gave it a second thought. After all, he did it only because his college football coach had encouraged him and his teammates to register.

“The odds are you’re just going to sign up and probably be in it for the rest of your life,” Mushaw, a student at Central Connecticut State University, told NBC. “You probably won’t get a call.”

About six months after the sign-up, he did get a call. The now 21-year-old linebacker’s bone marrow matched a patient in Virginia. Mushaw had to decide whether to go all in. It would mean spending a night in the hospital and undergoing general anesthesia, which carries some risk. And he’d likely never know whether his donation worked.

“Right away I said yes,” Mushaw told WTNH. “Once they took 17 vials of blood, I was like, ‘All right, this is real. This is going to happen.’”

Mushaw didn’t know it at the time, but his donation would go to a five-month-old girl named Eleanor who was sick with a rare immunodeficiency disease that was diagnosed when she was only three months old. Eleanor had rarely left her house other than to travel to the hospital or the doctor. Her immune system was far too weak to risk even the most casual human contact. As the days and weeks passed, her condition had become only more dire.

“Eleanor was going to die without a bone marrow transplant,” her mother, Jessica, told NBC. “The options were to either get a transplant or face fatality in toddlerhood.” (The family has chosen to withhold its surname to maintain privacy.)

Still, there was no guarantee of success. Eleanor’s family had hoped that she would have some improvement from the transplant, enough to live a more normal life. Instead, after a few weeks, the doctors at Children’s National Hospital in Washington, DC, came back with shocking news: Eleanor’s condition hadn’t just improved—Mushaw’s bone marrow had cured her.

“She’s doing amazing,” Mushaw says. “Better than they ever expected her to be. It was a little surprising just because of how serious her condition was, but it was more of a relief and happy feeling than anything.”

“WHEN THEY TOLD ME IT WAS A LITTLE GIRL, I GOT A LITTLE CHOKED UP.”

Mushaw didn’t know any of this until months after his donation. In most cases, the donor and recipient remain anonymous to each other. But about six months after the procedure, Eleanor’s parents sent him an e-mail to thank him for saving her life.

“When they told me it was a little girl, I got a little choked up,” Mushaw says. “Just to hear that someone so young has the odds stacked against her and her only hope is in your bone marrow is a heavy feeling.”

But their surprising connection was only beginning. Mushaw asked whether he and Eleanor could FaceTime regularly so he could check on her progress. “It was amazing to watch her and be a part of her life,” he says. “It felt amazing and surreal to see it all, just knowing her situation. Now she’s a perfect, normal little two-year-old.”

Eleanor kept tabs on him, too, by watching his football games on TV. In August, about a year after Eleanor’s life-changing transplant, Mushaw invited her family to drive from Virginia to Connecticut to meet at one of his games. From the stands one weekend in November, little Eleanor stood dressed in a royal blue jersey with Mushaw’s number printed on the back. On the front of her jersey was “Be the Match,” the name of the organization that facilitated the donation.

Mushaw himself, by then a senior, was wearing his own special symbol that day: a pair of cleats with Eleanor’s name printed on them.

Tiny shouts of “Mike! Mike!” could be heard from the stands as the little girl cheered on her very own hero: a six-foot-two, 225-pound linebacker with a very generous heart. She ran around and jumped for joy with her parents, pointing at the field as she watched Mushaw play.

“They sent me a picture during the game when she was watching and pointing to me,” Mushaw says. “Afterward, when I saw my phone, I just couldn’t stop smiling at the picture. I set it as my background.”

He wasn’t the only one smiling. “I had waited by that point well over a year to finally give a hug to this guy who saved my daughter’s life,” Jessica says. “We felt like we were on cloud nine all weekend getting to spend time with him and have him be with Eleanor. I don’t think I’ve ever smiled that much.”

In January, Mushaw reunited with Eleanor, this time in Virginia, to celebrate her birthday. It will likely be the first of many celebrations together. “As a parent, it feels really great to watch someone love your kid as much as you do,” Jessica says. “We were two complete strangers, and now we’ve become such a big part of each other’s lives.”

The funny bone isn’t a bone; it’s a nerve.

Catgut isn’t made from cats; it’s made from sheep.

French fries were invented not in France but in Belgium.

A ten-gallon hat holds only about three quarts of liquid. ■