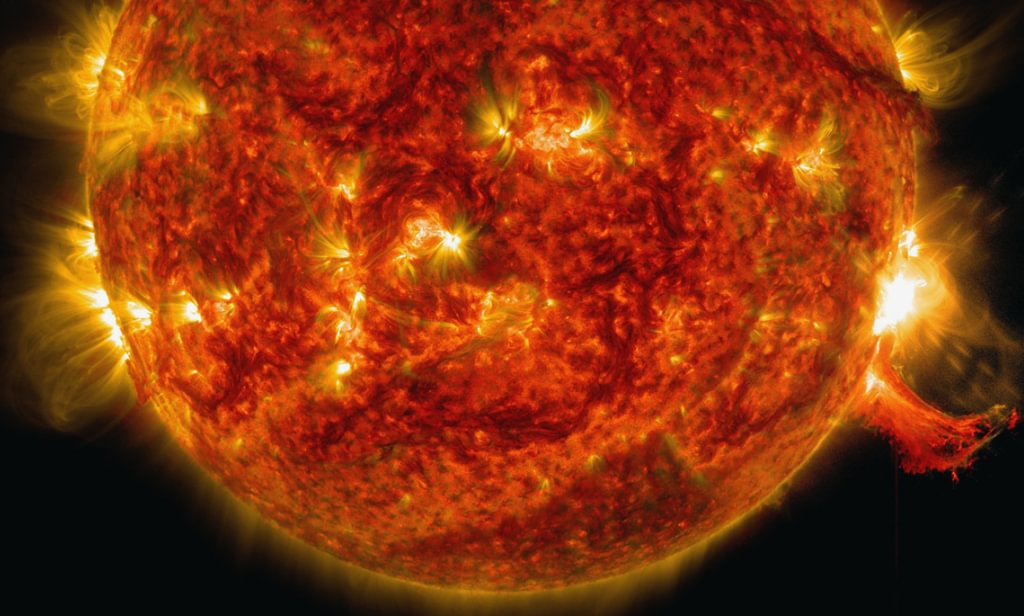 FLARING UP. NASA’s Solar Dynamics Observatory spotted a solar flare and heated material erupting from our star in October 2014. Although the Sun is active today, it was even more so in the past. (NASA/SDO)

As Sun-like stars mature, their rotation tends to slow. But when these stars are young, they rotate more quickly and less predictably. Two stars of the same mass may rotate at drastically different speeds. And stars that are fast rotators tend to hurl more powerful radiation and charged particles into their systems, often to the detriment of their planets.

Without other clues, learning how fast the Sun once spun is difficult. But researchers led by Prabal Saxena of NASA’s Goddard Space Flight Center published a study May 3 in The Astrophysical Journal Letters that used lunar samples to determine how fast our Sun may have rotated in its early years, a factor that helped to determine how the inner planets, including Earth, evolved.

“After a billion years,” Saxena tells Astronomy, “[stars with the same mass] all converge to the same rotation rate. There’s few clues as to what your state was before,” based on the star itself. But Saxena’s team found a workaround in the amount of potassium and sodium measured in lunar samples.

Sodium and potassium are volatiles, meaning they’re easily dispersed from the lunar surface by strong solar activity or other violent phenomena. So, the amount of these elements left on the Moon should indicate just how active the Sun once was — and thus how fast it rotated. Saxena’s team tabulated the quantities of each in lunar samples and used computer modeling to run the clock backward on three imaginary Suns: a fast, medium, and slow rotator. The faster the young Sun’s rotation, the more coronal mass ejections and solar flares it gave off, stripping more volatiles from the Moon.

They found that if the Sun had been a fast rotator, with all the solar activity that implies, there shouldn’t be any potassium at all left in lunar samples. The fact that there is means our Sun was likely a quiet youngster, rotating more slowly than the average star. But the team can’t pinpoint exactly how slowly the Sun rotated because it’s not clear how volatile-depleted the Moon’s rocks were to begin with. Theories about the event that formed the Moon and its effect on volatiles still disagree. 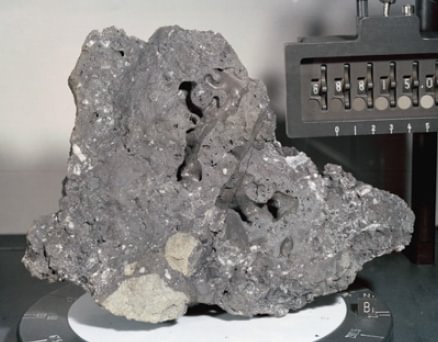 IN THE ROCKS. Samples of the lunar surface, such as this rock brought back by Apollo 16 astronauts, allow scientists to estimate our Sun’s activity levels during the solar system’s early years. (NASA/JSC)

Regardless, the Sun did rotate faster — some nine to 10 days per rotation, instead of today’s 27-day average — during the solar system’s first few hundred million years. That means the young Moon and planets were subject to more solar activity than they endure today. That’s likely the period when Venus lost its hydrogen, and Mars lost its atmosphere and then water. Even Earth likely lost its first, thinner atmosphere, until it made a new one from volcanic gases, dense enough to survive the Sun’s harsh activity with the help of our planet’s magnetic field.

As NASA plans return visits to the Moon, lunar scientists hope for more samples from across the surface and deep underground to learn more about the early history of the solar system. ■