COLUMNS
/ Off Watch
The MARSHAL Plan
To say that my being in the middle of this fiasco was ironic is an understatement. If ever there were a fox in the henhouse in this scenario, it was me.
BY HERB McCORMICK 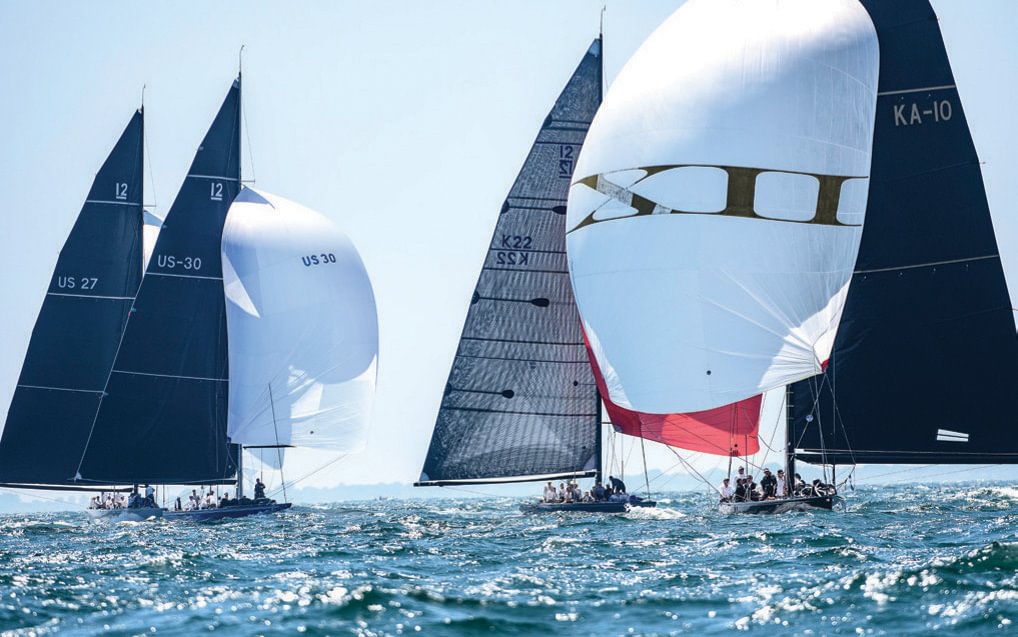 The image of the old America’s Cup boats charging downwind off Newport brought back some fine memories. (PAUL TODD/OUTSIDE IMAGES)

The World-Famous Yachting Photographer (heretofore identified as WFYP), a man whose America’s Cup images back in the day graced the covers of Sports Illustrated and Time magazines, not to mention nearly every sailing publication on the planet, was in a fit of barely controlled anger. In fact, he was hollering at somebody, and in no unequivocal terms. And just who, or what, was the object of his ire and derision?

Um, that would be me.

It was a windy, sunny midweek race in last summer’s 12 Metre World Championship regatta off Newport, Rhode Island. The “Twelves,” of course, were the yachts in which the America’s Cup was contested in these very same waters right up until the Australians won the trophy in 1983, so this homecoming event was a big deal locally. Along with my old sailing pal, retired Newport firefighter Billy Winthrop, we were stationed at the bottom mark of the racecourse on a marshal boat (more on this in a moment) as the 21-boat fleet came charging toward us under spinnakers. It was truly a colorful, stirring sight.

As marshals, our job was to keep the spectator fleet—and the press boats—off the course and out of danger. Which is why we were pestering the photo boat in which WFYP was plying his trade. Unfortunately, his driver had breached the perimeter boundary we’d set and, in our humble opinion, was way too close to the action. As we nudged our way between them and the mark on a 22-foot powerboat to shoo them away, WFYP disagreed with our humble assessment. Vocally. Very vocally.

Our main concern as marshals at this stage of the race was a scenario in which a Twelve lost control on a spinnaker douse and careened into the spectator fleet. A 12-Metre yacht is a 35-ton missile with a small rudder and too much sail area, and when they lose it, man, they lose it. Which is precisely what happened in the middle of our, er, negotiations, when the crew of Enterprise completely botched their kite takedown and came screaming past the mark in total, wonderful, unadorned chaos. Toward, you know, us.

To say that my being in the middle of this fiasco was a bit ironic is a major understatement. If ever there were a fox in the henhouse in this sort of scenario, it was me. Over the course of my career, I have covered Olympic regattas, America’s Cups, Sydney-Hobarts and countless other major sailing events from a perch on a press boat, and I am always the guy whispering to the driver, “C’mon, mate, you can edge in there a bit more.” So, I understood WFYP’s point. Fully. Right up to the moment we were about to get creamed.

However, as a member of Newport’s Ida Lewis Yacht Club, which was the host club for the event, I’d signed on to volunteer in whatever capacity was needed for the regatta. Hence, a marshal. Truth be told, for too long I’d skirted my volunteer responsibilities at the club, where everyone is urged to chip in from time to time. And now here I was, about to get emulsified for my past malfeasance. It briefly crossed my mind that I deserved it.

Up to this point, I’d thoroughly enjoyed myself. Yes, for a couple of windless mornings, in which we sat for hours waiting for the breeze to fill in high-summer weather, I had long periods to ruminate on the fact that yacht racing is the only sport in the world where you can’t play because it’s too nice out. And while on the one hand it was hard to imagine a bigger display of Yachting (capital “Y”) opulence, on the other, once the racing actually commenced, as a sailor, I found it hard to envision anything prettier or cooler. I grew up in Newport, where the America’s Cup was the backdrop of my youth for many a summer, and to witness this living, breathing display of sailing history was pretty darn great.

In any event, Billy leaned hard on our throttle and WFYP’s driver did the same, and as the shouts aboard Enterprise receded behind us, disaster was averted all around, though not before we’d left vicious wakes astern, something the race director had explicitly warned us against. Sorry.

The next morning, WFYP and I met on the docks before racing, aired our mutual concerns, and parted ways as the friends we were before the little incident. All was forgiven. Next time, though, I’m going to try to score a ride on one of the race boats. Sure, I’ve blown some douses before, but I’m still a better sailor than a cop.