IN THIS ISSUE
A ROMAN CITY JERASH IN THE SECOND CENTURY A.D., AT THE HEIGHT OF ITS ROMAN IMPERIAL SPLENDOR (ILLUSTRATION: JOSEP RAMON CASALS)

JERASH’S INCORPORATION INTO the Roman Empire heralded a high period of splendor for the Hellenistic city. The illustration shows the settlement as it probably looked in the second century A.D., the period in which many of its impressive monuments were built. Ringed with groves of fruit trees, Jerash was very prosperous, benefiting from iron-ore deposits and rich agriculture in its hinterland. The city was built on two low hills, either side of the Chrysorrhoas River. After Trajan’s accession the ancient King’s Highway became the Via Nova Traiana (New Trajan Road), whose north-south trade brought prosperity, foreign customs, and diverse languages in the early second century. By this period, Jerash’s layout was fully Romanized: The main entrance was by the South Gate and led directly to the Oval Plaza and the main street, known as the Cardo Maximus. This impressive, colonnaded avenue crossed the entire city from south to north. Its construction dates back to the first century A.D. (although it was modified on several occasions later). The Oval Plaza is from the same period. Traffic would have moved along this great avenue, changing direction at one of the tetrapylons, the fourcolumned monuments that connected the south-north Cardo Maximus with the Decumani, the roads that crossed the city from east to west. 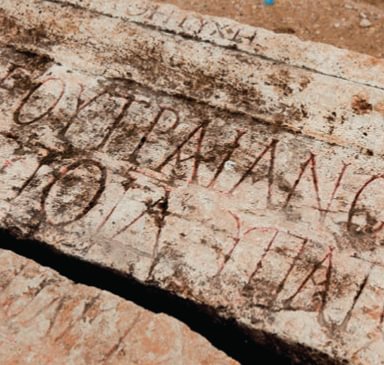 1 THE ROMAN EMPIRE reached its widest extent under Emperor Trajan, who died in 117. Just over a decade later, in the course of his epic series of travels around the vast realms under his rule, Trajan’s successor, Hadrian, visited the empire’s eastern bounds. Proceeding into Judaea from Egypt, he visited Jerusalem, then in ruins following a local revolt. Having resolved to rebuild Jerusalem and rename it, Hadrian decided to stay in the region for the winter of A.D. 129-130. He spent his time in Jerash. To commemorate his extended visit there, a huge triumphal arch, some 123 feet long by 30 feet wide and 70 feet high, was erected to the south of city. Lying some distance from the South Gate, archaeologists believe it may have been intended to mark an ambitious southern expansion of the city. Such an arch was also built in Athens following Hadrian’s sojourn there. Although the arch was intended as a declaration of universal Roman design, it also incorporated Nabataean decorative elements.

The upper section (attic) was rectangular, divided into two stories and fronted with pilasters.

A commemorative inscription of the emperor’s visit was added to the attic that topped the central arch.

Four niches with triangular pediments adorned the facade. They each housed a statue of Hadrian.

The central part of the monument was formed by a large vaulted arch, around 35 feet high and almost 19 feet wide. On each side was another vaulted arch, each over 16 feet high.

The central columns each rested on a pedestal in the Attic (Greek) style and had a support decorated with acanthus leaves. Columns also flanked the smaller vaulted arches to each side.

The lateral structures were formed by four engaged columns resting on pedestals and topped with Corinthian capitals. The arches of the lower niche flanked a vault formed by a blind wall. 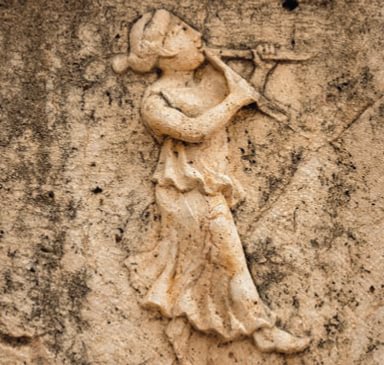 A YOUNG FLUTE PLAYER DEPICTED IN RELIEF, FROM THE SOUTH THEATER AT JERASH (IVAN VDOVIN/AGE FOTOSTOCK)

2 JERASH’S SOUTH THEATER is one of the most remarkable of all Roman theaters in the ancient world. With the capacity to hold 3,000 spectators, it was erected at the end of the first century A.D. during the reign of Emperor Domitian and was embellished and remodeled by his successors, Trajan and Hadrian. Located near the hill of the Temple of Zeus-Jupiter, the theater displays typical Roman features: an orchestra (lower stage) and three classical entrances of the skené (scene house) behind it. Seated according to their social status, spectators could use theatergoing to show off their wealth. Many of the theater’s running costs were paid for by the rich. An inscription notes that one T. Flavius paid 3,000 drachmas for the installation of a section of seating. Through such patronage, the wealthy secured themselves the best seats as well as their own entrance, separate from that used by the rank and file. The common viewers entered by a different access known as a vomitorium (so named because it “vomited” people out after the spectacle ended). Performances were popular with travelers who would be impressed by the splendor of Jerash’s sophistication so far from Rome.

This space, the lower stage where the chorus stood, was smaller in Roman theaters than in Greek ones and evolved from being circular to semicircular. Here, a slight tapering at the sides gives it a horseshoe shape.

In Roman theaters this location was the higher stage where artists performed. Below it lay the hyposcenium, where the mechanisms and rigging needed for the performances were kept.

The monumental structure behind the proscenium was called a skené in Greek and scaenae frons in Latin. The skené at Jerash was built in pink and white limestone and decorated with painted Corinthian columns. LIFE UPON THE STAGE

The South Theater at Jerash was built during the late first-century A.D. reign of Domitian over an older structure. The theater is considered one of the finest examples of Roman architecture in the Middle East. 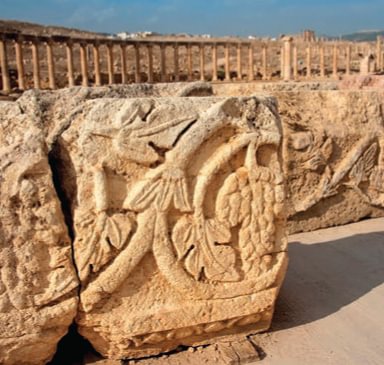 RELIEFS WITH ORNATE DECORATIONS HAD ONCE FORMED PART OF THE LINTELS OF THE OVAL PLAZA. (ALAMY/ACI)

3 THE SPECTACULAR OVAL FORUM is a feature only found in the eastern Roman Empire. While oval-shaped public spaces can also be seen in other cities of Roman Syria, such as Palmyra, the Oval Plaza of Jerash is prized both for its size and the careful civic planning that allowed it to gracefully link different elements of the city. Built in the first century A.D., possibly as the center of the commercial and civic life of Jerash, it was paved with stones that formed an impressive concentric design. The forum is nearly 300 feet long and more than 250 feet across at its widest point. Around the outside stands a magnificent Ionic colonnade. From here, a newly arrived visitor’s eye was drawn to the Cardo Maximus as it cut through the city to the north. The Temple of Zeus-Jupiter loomed over the western side. Built in the time of Emperor Marcus Aurelius, the temple’s double structure on two terraces could be seen all over the city. This magnificent entrance, built in the third century A.D., gave access to the Oval Plaza from the Cardo Maximus, the main northsouth artery of Jerash.

In the center of the Oval Plaza stood a podium with a statue, perhaps of the emperor Hadrian, although this detail cannot be confirmed.

The plaza was surrounded by Ionic columns supporting a portico. It is believed the elliptical design inspired Bernini’s design for the colonnade in St. Peter’s Square, Rome.

Atop a hill that rose some 40 feet above the Oval Plaza, the temple was built facing east on a great podium, measuring 135 feet long by 92 feet wide. 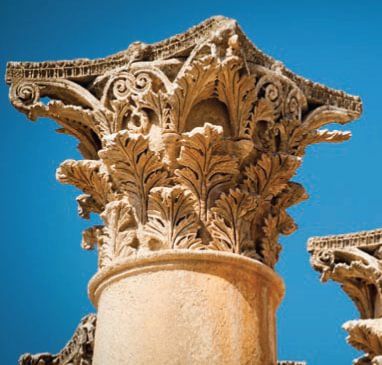 IN HONOR OF ARTEMIS

4 CONSTRUCTION OF THE ARTEMIS TEMPLE began in A.D. 150, during the reign of Antoninus Pius. Artemis, the Greek goddess of hunting (her Roman equivalent is Diana), was the patron goddess of Jerash, and the temple raised in her honor was one of the most impressive sanctuaries of the Middle East. Standing on a podium some 15 feet high, the temple was built to be seen from distant points of the city and the surrounding countryside. The temple complex was vast, and sprawled a third of a mile from its eastern access to the temple itself. It was accessed through a splendid portico, known as the propylaea. After ascending a staircase, visitors would then enter a large sacred precinct or temenos (right), enclosed by a portico supported by Corinthian columns. This terrace was where most of the religious ceremonies took place. An altar for sacrifices was placed near the steps leading up to the temple. The six columns in the front row of the temple make it a hexastyle structure. Later, in the Byzantine era, a pottery workshop was installed here and, after the arrival of the Muslims, the walls of the sacred precinct were transformed into a fortress. In the 12th century the crusader king of Jerusalem Baldwin II took over this citadel, by which time the rest of Jerash was already in ruins. There is no decoration on the tympanum now, but it may once have been adorned with scenes depicting Artemis as a huntress. At the apex of the pediment is a statue of the goddess, brandishing a bow.

Six columns in front, six at the back, and 11 on each side supported the temple. All were Corinthian, decorated with acanthus leaves. It is likely that the columns were originally painted in two colors, but no traces remain today.

A large porticoed area was supported by columns surrounding the rectangular perimeter of the temple. Under the arcade, stalls connected with cultic practices would have been be set up. ■