“All of my work comes from the same place—material experimentation,” says Lee. In 2006, for his graduation project at Hongik University, he showcased a series of lights made from draped and woven electrical wire. Soon he was weaving chunky chairs and sofas from PVC and other unconventional cords and applying enameled copper to cabinets and dining tables, using an ancient technique often applied to small bowls and vases en masse. These days he’s investigating 3-D printing and aluminum sand casting. “There’s this innate Korean quality of fastness,” he says, “wanting to learn something fast, show something fast.” A star of Salon 94 Design’s roster, he has harnessed that creative momentum, building a community of local designers in the once-industrial Seongsu-dong neighborhood, where he leases studios to young creatives and champions Korean talents at his exhibition space, Supply Seoul. Lately he’s noticed “the world has begun to appreciate our newness.” kwangholee.com

“They’re inspired by stone stacks, something Korean people make when they’re wishing for love, or luck on a test,” the designer explains of her colorful side tables, which she regularly assembles into totems for display. (Two groups are pictured below at her studio in the Yangcheon-gu neighborhood.) “They always look precarious, but somehow they balance.” After studying wood craft at Pusan National University, Kim went to Hongik University for furniture design and apprenticed under a master artisan to learn ottchil, the Korean traditional lacquer method. She now gives the labor-intensive process a contemporary twist, hand-brushing coat after coat onto steel forms, then sanding away to reveal painterly patterns. A single table can take nearly four months to finish. Working with the lacquer feels autobiographical for Kim, who says, “I am Korean; these works show who I am.” okkimstudio.com 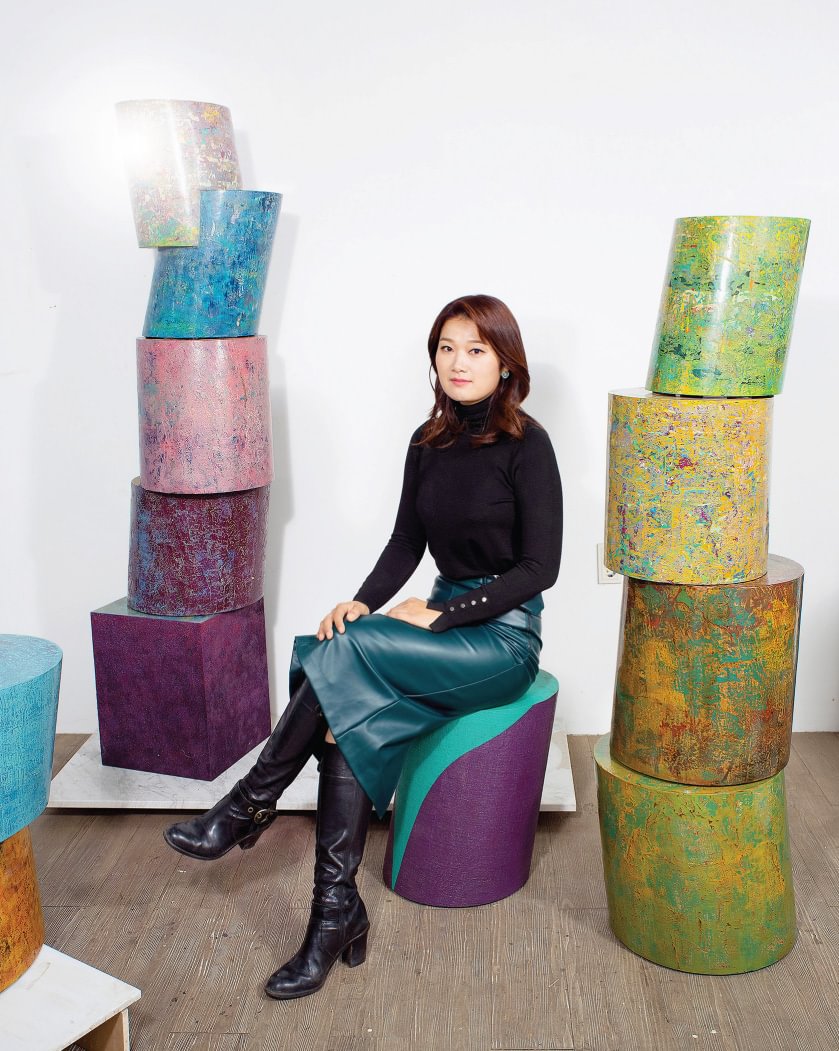 Inflated balloons hang like sausage links in a corner of Yang’s white-box studio. Each one will receive eight coats of epoxy resin, hardening into forms sturdy enough to create fantastical seats. “Balloons are empty inside,” muses the designer, who floated center stage Stateside after the Future Perfect began showing the series last spring. “I was fascinated by the idea that such a vulnerable material could be made solid.” Yang, who used to share a studio with his Hongik University peer Kwangho Lee, is now a key figure of the burgeoning Seongsu-dong design community. “This is a country where art history could not grow deep,” he says, reflecting on the tumultuous colonial period and the Korean War. “Finally we’re seeing that being restored.” seungjinyang.com “Jaeryo, if you translate it, means ‘material,’” says Nuri Kim, explaining the name of the firm she cofounded with fellow designer Sangwon Oh. The moniker is fitting. The two teamed up in 2018, dedicating themselves to different media. Kim has focused on ceramics, using both plaster-mold and hand-building techniques to create futuristic formations in clay. (Her 2018 Nuage stool was shown at Kwangho Lee’s Supply Seoul space.) Oh, on the other hand, studied pulp and paper engineering and channeled that knowledge into a body of work in papier-mâché. While ceramics have a long tradition in Korea, he notes, “when it comes to paper, people only think of traditional hanji. The material ideas are a bit limited in Korea.” But Jaeryo is already trying to broaden that conversation. “Seoul is so fast-paced,” says Kim, who is interested in beadwork and jewelry. “I’m constantly thinking about new ideas, what to do next.” jaeryo.com

When Kim, who graduated from Cranbrook Academy of Art in 2009, returned home and started working at his family’s Seoul foam factory, he thought his design practice (slick, digitally produced pieces in wood and metal) would have to go on hold. But he soon had an epiphany: “Foam is fun, interesting, and best of all [for me] free.” After-hours he began experimenting with the material, often used for mattresses, shoe soles, and the like. Soon he was carving it into abstract sofas and chairs—some blobby, like melted marshmallows; others clean-lined, like supersize kitchen sponges. After making a splash at Cristina Grajales Gallery’s 2018 booth for Design Miami, he’s now working on a finish to make the chairs suitable for the outdoors. “Our generation has to find the materials of our time,” explains Kim. “We don’t have design history here. So we are making Korean design.” kimsanghoonart.com