LEGEND IN HER PRIME
POWER, PRECISION, PERSEVERANCE
FROM THE GYM TO THE SLOPES TO THE COURT, FEMALE ATHLETES CHALLENGED LIMITS, SET RECORDS AND INSPIRED THE NEXT GENERATION
BY STEPHANIE APSTEIN
PHOTOGRAPH BY LIONEL BONAVENTURE/AFP/GETTY IMAGES 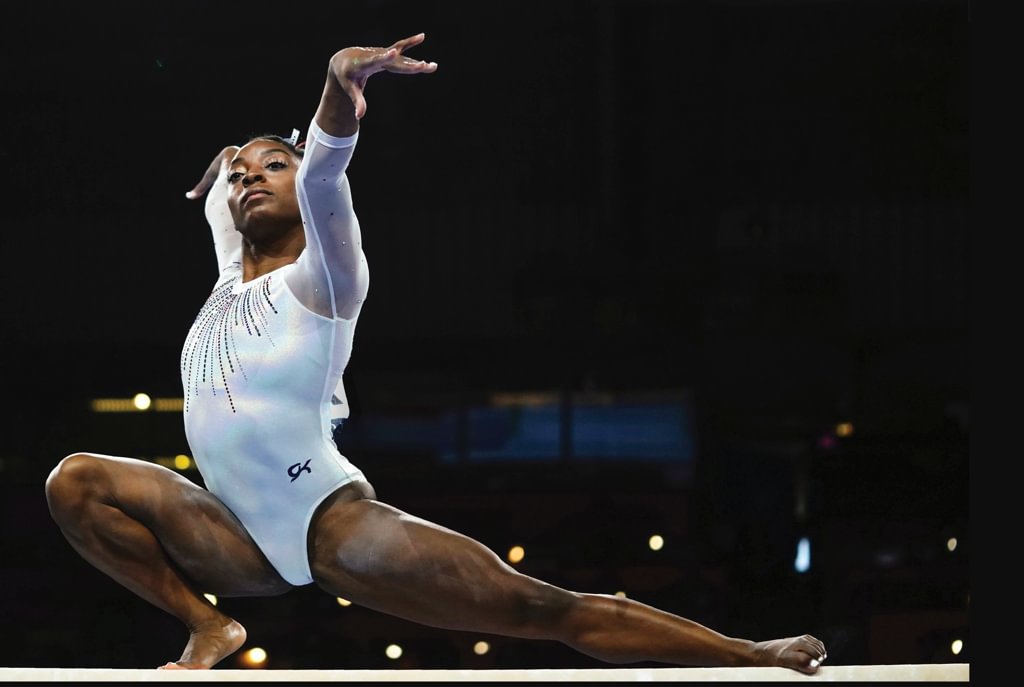 THIS HOLIDAY SEASON, consider the less fortunate, such as all the world-class female gymnasts who had the lousy luck to be born around the same time as Simone Biles. Many of them could have won gold medals if they had just come along a decade earlier or later. Instead, they’re all battling for second place.

This has been true since at least 2016, when Aly Raisman, after winning silver in the Olympic all-around competition, joked that she felt she had won. But this year, Biles, 22, is doing more than just dominating her sport, she’s transforming it.

At the world championships in Stuttgart, Germany in October, she won five gold medals—in the team competition, the individual all-around, the vault, the balance beam and the floor exercise. That gave her 25 world championship medals to surpass the U.S.S.R.’s Vitaly Scherbo (23) for the most ever. She also debuted two new elements: a double double (two twists, two backflips) dismount off the beam and a triple double (three twists, two flips) on the floor exercise. When a gymnast becomes the first to perform a skill at a major competition, the skill is then named for him or her. These were Biles’s third and fourth named elements.

The International Gymnastics Federation (FIG) assigned the triple double a difficulty valuation of J, or a full point, the highest possible number. But it assigned the double double only an H, or eight-tenths of a point—surprisingly low given that the same skill, performed on the floor, where it is easier, earns the same score. The difference may not seem like a big deal, but it’s huge in a sport in which medalists are separated by tenths of a point. 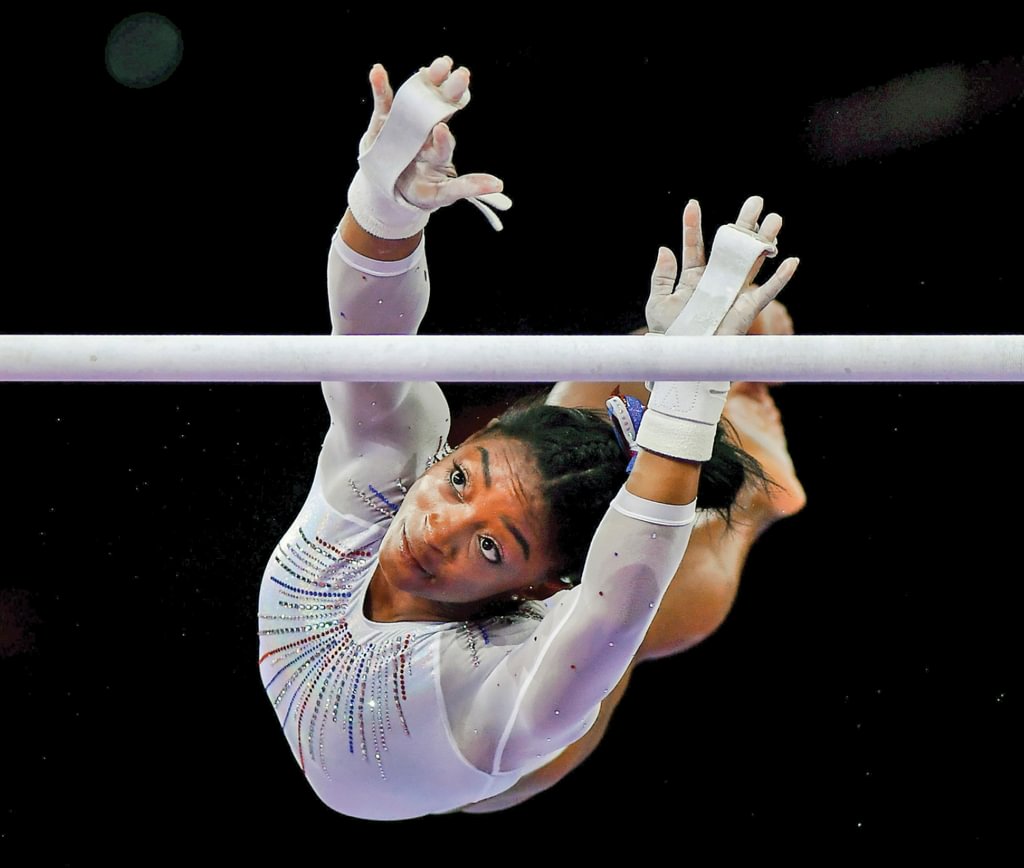 After winning five events at worlds, Biles became the most decorated gymnast in history.

Biles found out about the governing body’s ruling on Twitter just before competing in the world championships. She was incensed. She still is.

Since 2006, the sport has awarded both a difficulty and an execution score for each routine, incentivizing bold and innovative athletes such as Biles to push the limits of what gymnasts are capable of. The FIG said that her double double was given a lower point value in order to discourage less-talented gymnasts from attempting it (and risking injury). Their official statement noted that the women’s technical committee “takes into consideration many different aspects; the risk, the safety of the gymnasts and the technical direction of the discipline.” Biles says the committee’s response was absurd. 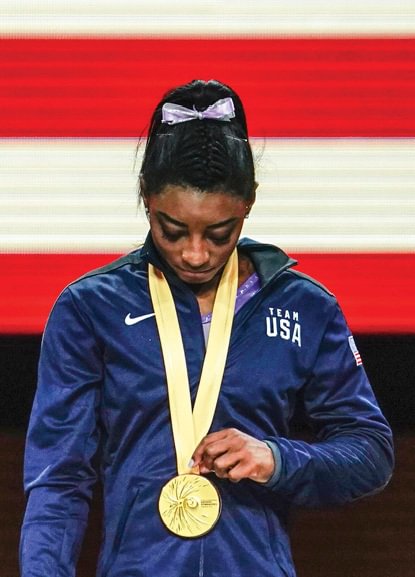 “They wasted their breath,” she says, still exasperated, even six weeks later. “If another gymnast did it, then they would probably give it the correct value. They don’t like how far ahead I am of everybody else. They want a closer competition. They want to make it more interesting.”

Whatever the reasoning, the decision was unfair. The havoc Biles is wreaking upon her sport is infinitely more interesting than some artificially tight battle. She long ago assumed the mantle of most dominant gymnast of all time. She is now taking aim at most dominant athlete.

Most female gymnasts peak athletically in their teens, meaning that the world focuses most intently on them just as they hit their most vulnerable age. Biles used to find the pressure overwhelming. But Raisman gave her some good advice: You’re already the greatest of all time, she said. You’ve already done it. So just have fun.

For Biles, that will mean continuing to expand the limits of her sport, and occasionally of physics. (She has no formal diving training, but on vacation in Belize last month, she executed that double double dismount off a platform into the water. “Never be too (sea)rious,” read her Instagram caption.

“How is this even possible?” Raisman texted her. Biles could likely win almost every event if she scaled back and just nailed the same elements as everyone else. But what fun would that be? She loves the moments when she seems to suspend herself in the air for just a little more time than gravity should allow. She also loves the moments later on, when she can watch the video, taking in her dominance with the same slack-jawed awe as the rest of us.

Since breaking out at the U.S. Open 20 years ago, the 38-year-old icon has made 33 Grand Slam finals—including two in 2019 both against players at least 10 years her junior.

The five-time Olympic gold medalist finished 2019 by winning the 1,500-meter free at the U.S. Open by 29.97 seconds. Ledecky, 22, now owns the nine fastest times in the event in history.

After winning her fifth X Games gold last January, the first woman to land a frontside double cork 1080 in competition is taking this season off to concentrate on her freshman year at Princeton.

The woman who sent Ronda Rousey into retirement in 2016 and knocked out Holly Holm with a devastating head kick in July has been undefeated for more than five years.