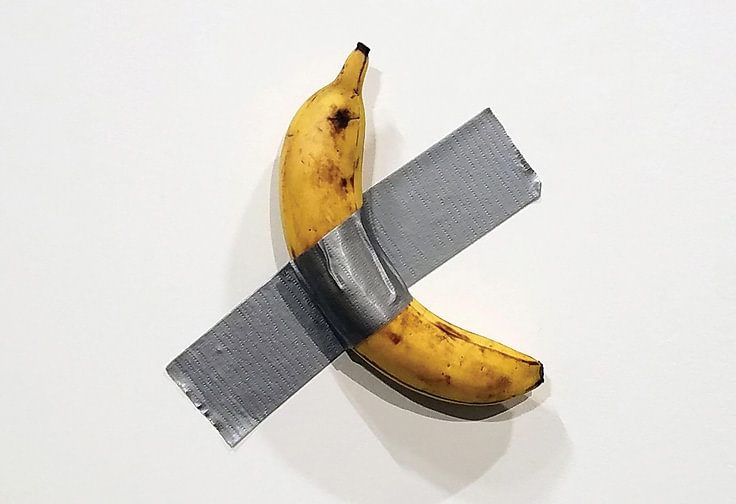 “Something is rotten in the art world,” said Mara Siegler and Natalie O’Neill in the New York Post. During Miami’s annual art week, three separate collectors each paid the “hard-to-stomach” price of between $120,000 and $150,000 for a browning banana duct-taped to a gallery wall. The satirical piece, titled Comedian, is the creation of zany Italian artist Maurizio Cattelan, who long has had the reputation of being “a prankster of the art world.” True to form, the gallery that sold the “overpriced old fruit” insisted it was not “simply a joke,” but a deeply meaningful commentary on how society assigns value to things. Cattelan said he’d initially conceived of using a bronze banana for the piece before realizing, “The banana is supposed to be a banana.” The angle at which it was taped to the wall, he noted, had been “carefully considered.”

Mission accomplished, said Jason Farago in The New York Times. Like it or not, Cattelan’s humorous sculpture generated worldwide notoriety and “offered the perfect weapon to those who think that contemporary art is one big prank.” But Cattelan’s duct-taped banana was more than a joke: It deflates the pretensions of the art world “from inside the art world” and mocks the absurdity of the astounding values often assigned to modern art in a simple and clever way. And don’t forget the “simple giggles” he gave us, too, said Scott Simon in NPR.org. “There is something absurd—and maybe delightfully so—about a banana on a wall, now turning brown, making people stop, stare, smell, and wonder about the fragile passage of time.”

You can also see it as “the perfect picture of wealth inequality” for this gilded age, said Nicole Lyn Pesce in MarketWatch.com. Today, ultrahigh–net worth individuals “collectively hold $1.74 trillion in art and collectibles,” and auction houses are logging record nine-figure sums for art. Let’s not complicate this, said Bill Hand in the New Bern, N.C., Sun Journal. Cattelan’s portfolio also includes a sculpture of a giant hand with an upraised middle finger outside the Milan Stock Exchange and a fully functioning, 18-karat-gold toilet titled America. Like these earlier works, Comedian is a wonderful expression of a bit of ageless wisdom. “There’s a sucker born every minute.” ■