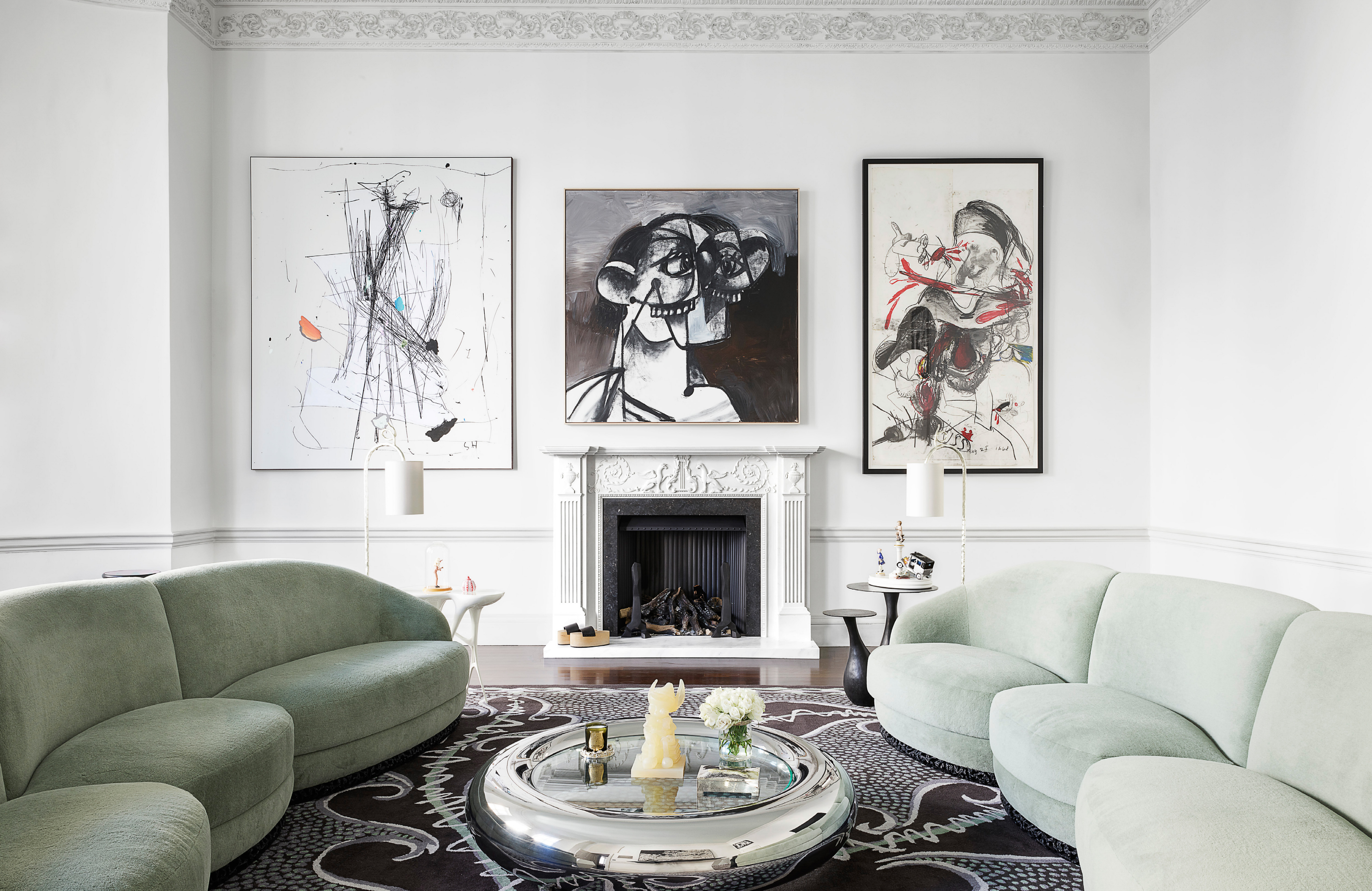 A TRIO OF PAINTINGS (FROM LEFT) BY SECUNDINO HERNÁNDEZ, GEORGE CONDO, AND PAUL MCCARTHY HANG IN THE WHITE SALON, WHERE NEARLY ALL THE FURNISHINGS ARE BY MATTIA BONETTI. FOR DETAILS SEE RESOURCES. 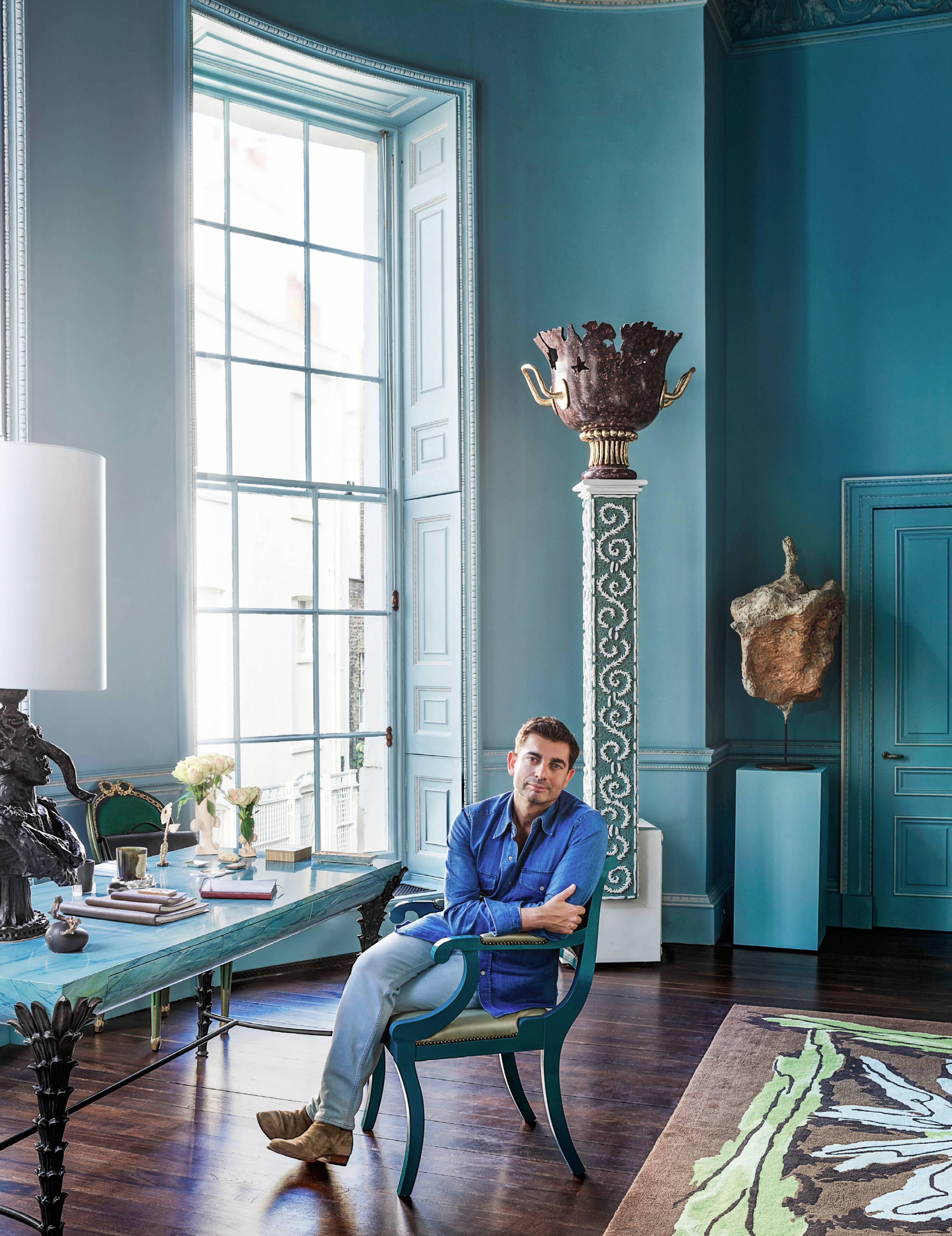 AD100 DESIGNER FRANCIS SULTANA LOUNGES IN A CUSTOM CHAIR AT A DESK ALSO OF HIS DESIGN. TORCHÈRE AND RUG BY BONETTI; FRANZ WEST SCULPTURE. 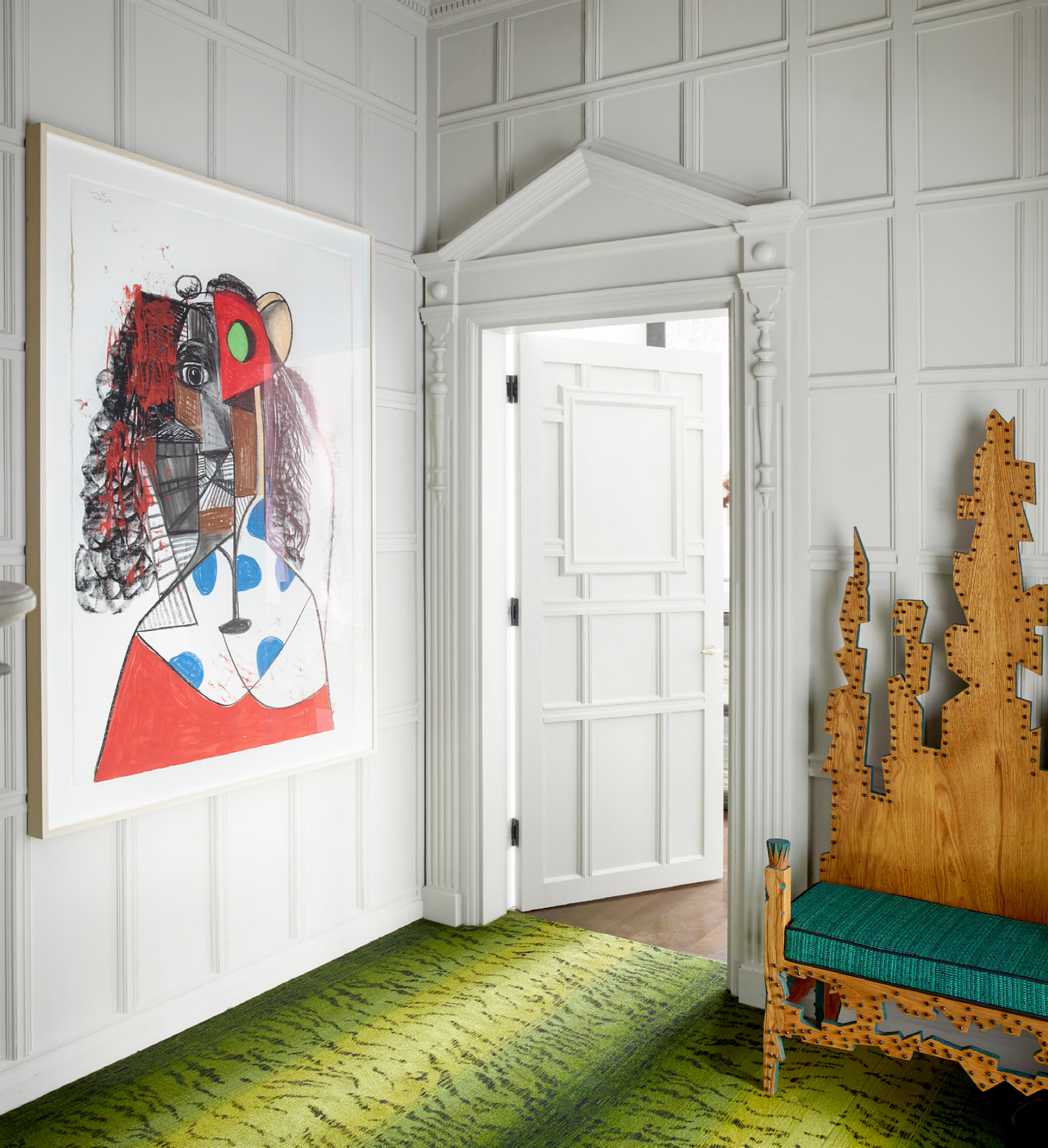 A MADELEINE CASTAING TIGER CARPET, IN A CUSTOM COLOR, LEADS TO A DOORWAY. BENCH BY BONETTI; ARTWORK BY GEORGE CONDO.

IF a ceiling could talk, the immense one beautified by ornate plasterwork reliefs looming 17 feet above the vast, ballroom-size drawing room within the newly restored home of AD100 decorator Francis Sultana and gallerist David Gill, at London’s fabled Albany residential complex, could certainly tell fascinating stories. Measuring 24 by 36 feet, the ceiling was conceived by architect Sir William Chambers as a crowning touch to the most prominent of several town houses he constructed after remodeling the Queen’s House (later known as Buckingham Palace).

Erected over five years beginning in 1771, Albany was built as a family home for Sir Peniston Lamb, first Viscount Melbourne. The proprietor of Melbourne House (as Albany was originally known), 26-year-old Lord Melbourne, was a “politician and courtier, patron and collector, society host and bon vivant” who had inherited a fortune,” noted the historian Joseph Friedman. But by 1802 the main block, service wings, and an addition were divvied up into some 69 “sets,” or apartments, for bachelors. And soon it became one of the smartest addresses in London. (By the end of the 19th century, women were permitted to live there, too.)

That glorious ceiling has dominated a space that served many functions during this time. Perhaps most famously it was the setting for a lively salon over which the late Flair magazine editor, Fleur Cowles, presided for 50 years and the domain where she annually hosted a birthday party for her “best friend,” Queen Elizabeth, the Queen Mother, as well as many other boisterous events, including a picnic for Cary Grant.

Sultana and Gill acquired the residence in 2016, and the renowned ceiling—along with the rest of the apartment—underwent 16 months of painstaking restoration. During this process, Sultana, Gill, and their primary design collaborator, Mattia Bonetti, looked upward to the priceless artifact for aesthetic direction.

“The ceiling was a big inspiration,” concedes Sultana of commissioning Bonetti to reinterpret Chambers’s elegant pattern of laurel leaves and arabesques to devise an array of furnishings and embellishments, including a dramatic nine foot-tall gilded mirror overmantel that appears to grow out of stylized cornucopias.

“Francis has a gift for creating space and balancing it with color,” says David Gill. “I place the art.” 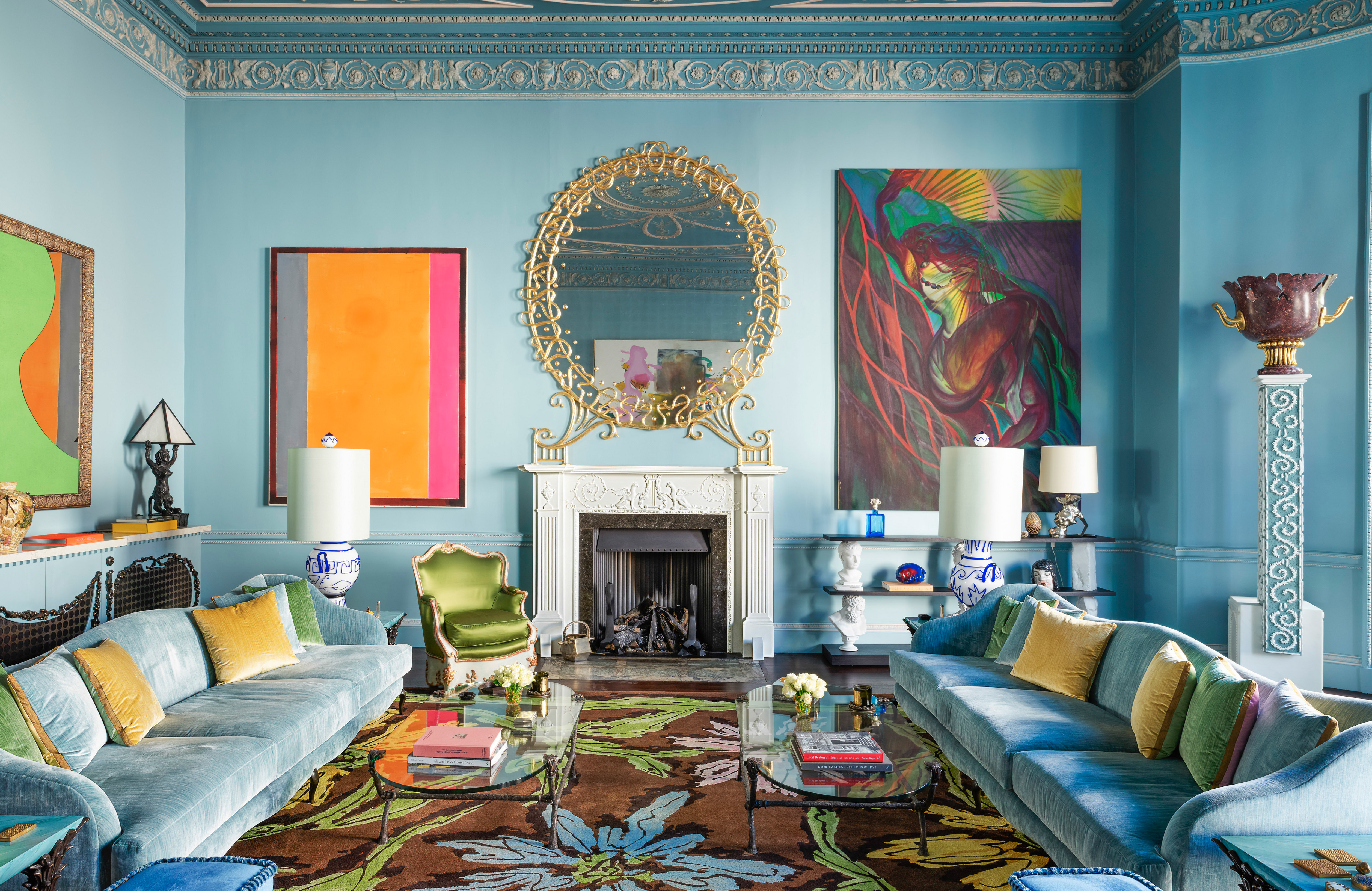 A BESPOKE PAINT COVERS THE BLUE SALON’S WALLS AND MOLDING, WHERE THE MIRROR AND LAMPS ARE BY BONETTI AND THE SOFAS AND COCKTAIL TABLES ARE CUSTOM. ARTWORKS (FROM LEFT) BY MICHELANGELO PISTOLETTO, MATT CONNORS, AND CHRIS OFILI. 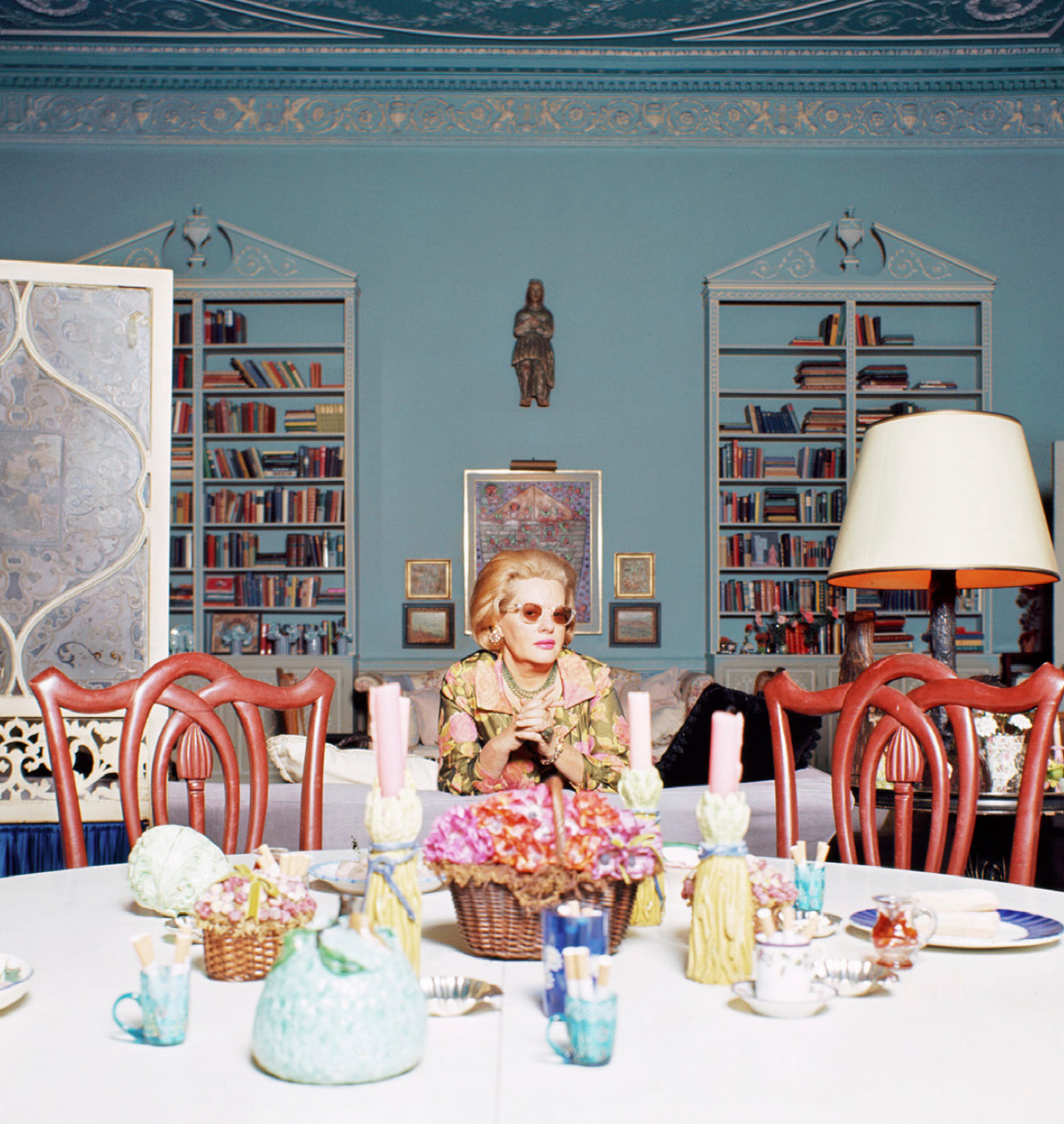 THE LATE FLAIR MAGAZINE EDITOR FLEUR COWLES IN THE SALON WHEN IT WAS HER HOME, 1966.

“It’s a contemporary Chippendale,” explains Sultana of the gleaming confection, which is actually made of resin, a far more modern material than the gilt-wood of the 18th-century cabinetmaker’s creations. The piece—as well as the set of four mirror paintings by Michelangelo Pistoletto, a leading figure in the Arte Povera movement, suspended above a Bonetti-designed sideboard—reflects ambient and natural light back into the socalled Blue Salon, named for the Wedgwood blue of its walls.

The bold painterly hues enlivening this grand residence are inspired by Jean-Michel Frank’s interior design of Nelson Rockefeller’s magnificent 810 Fifth Avenue triplex apartment in the late 1930s—particularly, the site-specific mural that the tycoon tasked Henri Matisse to conceive for his own drawing room. Sultana’s joyous ode to the pair of Aubusson carpets that Frank commissioned from the painter Christian Bérard is a sumptuous hand-tufted Mattia Bonetti floral rug. Sultana describes the giant blooms as a cross “between Bérard’s delicate florals and Andy Warhol’s poppies—they jump out at you, which is what I love,” he explains. “I wanted pastels, so we went for baby blue, the pink, the yellow, and the green because they went with all of my upholstery fabrics in the room. And the blue was important because this room is blue.”

A TRIO OF ARTWORKS BY Yayoi Kusama play off teal-lacquered Regency-inspired chairs and a maroon marble dining table by Bonetti in the Kusama Dining Room, as Gill and Sultana have named the space to pay tribute to the works by the Japanese contemporary artist that hang on the walls. “The scale of the room suited the paintings, and the subtle beauty of their color adds visual clarity to its architecture,” observes Gill. When it comes to the decorating, “Francis has a gift for creating space and balancing it with color,” adds Gill. “I place the art.”

Their collaboration results in a postmodern, almost surreal elegance conjured by showcasing, within Albany’s rarefied backdrop, bold contemporary painting, sculpture, and “design art,” the term coined to describe the one-of-a-kind furniture and objects that Gill has pioneered in his London gallery. His stable of cutting-edge talents includes Bonetti and many others whose pieces furnish the apartment. Sebastian Errazuriz created a bookshelf in the Blue Salon out of marble composite, reclaimed ebony wood, and steel, which the artist describes as a piece of “functional sculpture.” Michele Oka Doner crafted a bronze bench and wastebasket for the exquisite green marble–and–gilded powder room. (The basket, she admits, was originally conceived as a champagne bucket, but “David hauled it out from a bottom shelf in my studio, and then Francis got the idea for using it as a receptacle.”) 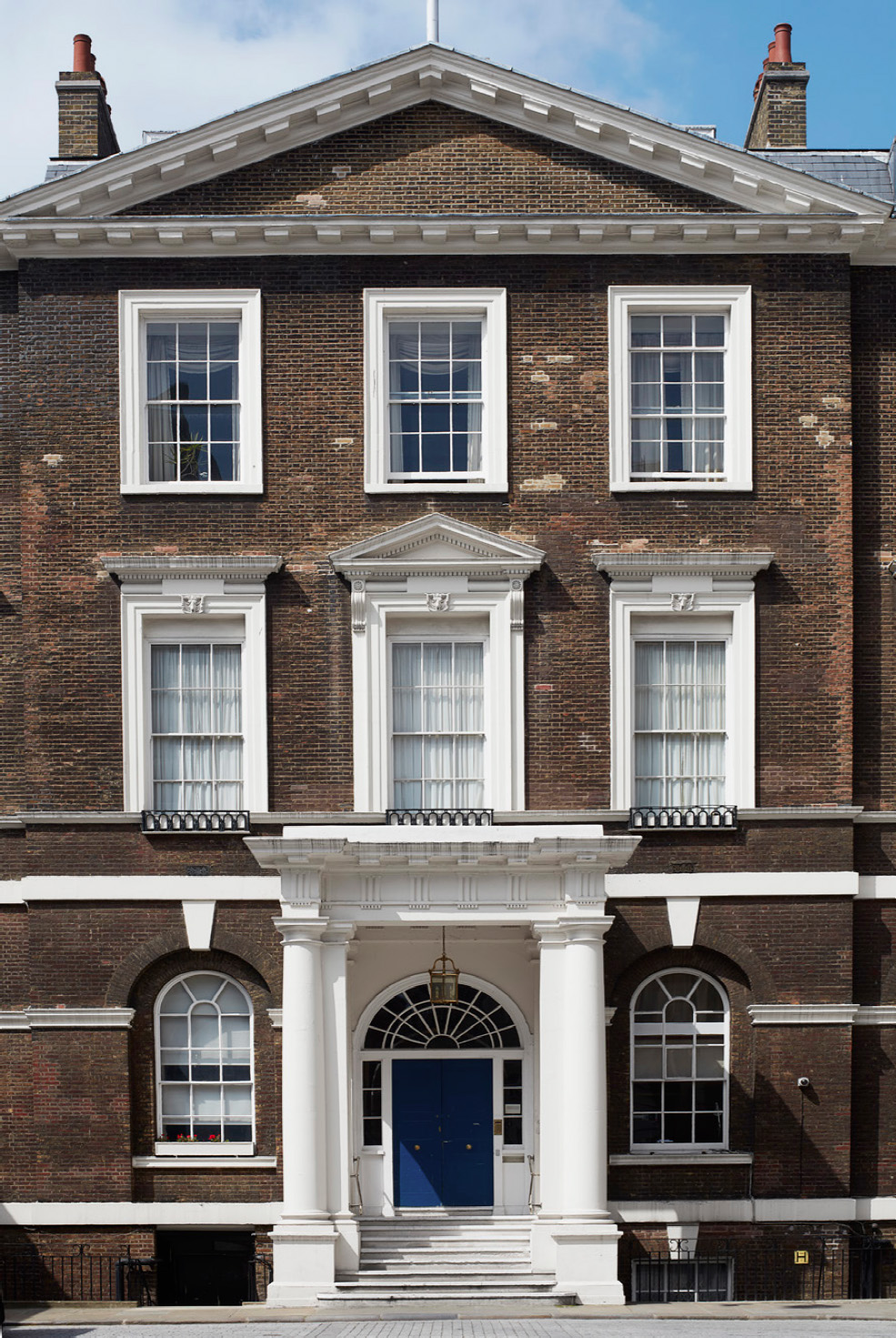 The color play continues in the kitchen. The cabinetry concealing the appliances, which was designed by Plain English, is a delicious chocolate brown. Sultana swings open a cupboard door. Inside the cabinet is a compact version of a traditional British pantry. Inspecting the row upon row of Mariage Frères tea boxes—as well as a mouthwatering array of condiments, preserves, and spices from nearby Fortnum & Mason—he admits, “This is the larder of my dreams. I get excited just looking at it!”

With the kitchen’s chef’s prep station—not to mention an alluring guest room in which the walls are lined with a brand of vintage raffia that Christian Dior once utilized to fashion handbags—Sultana and Gill are utterly equipped to carry on the convivial spirit that has always permeated their landmark home. 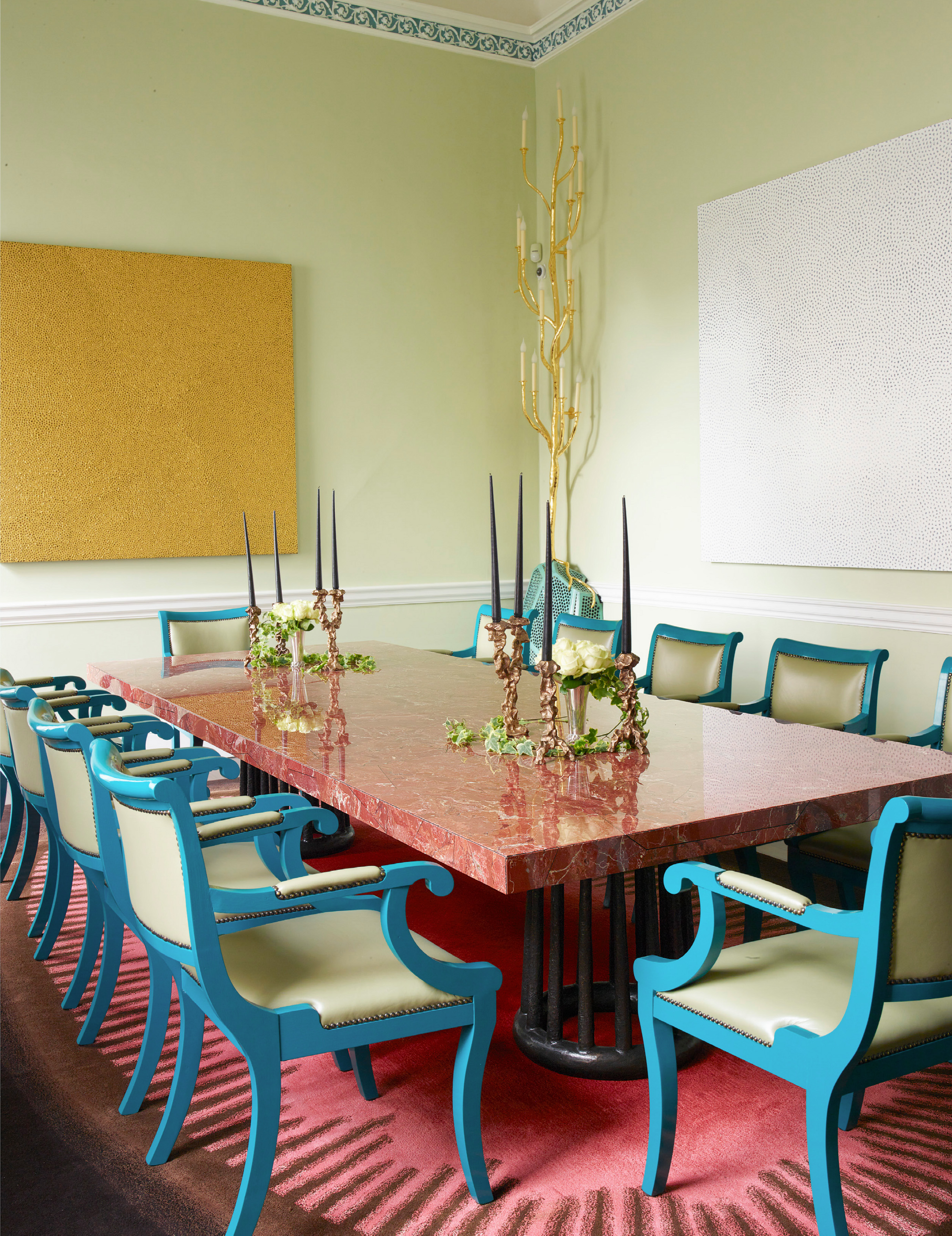