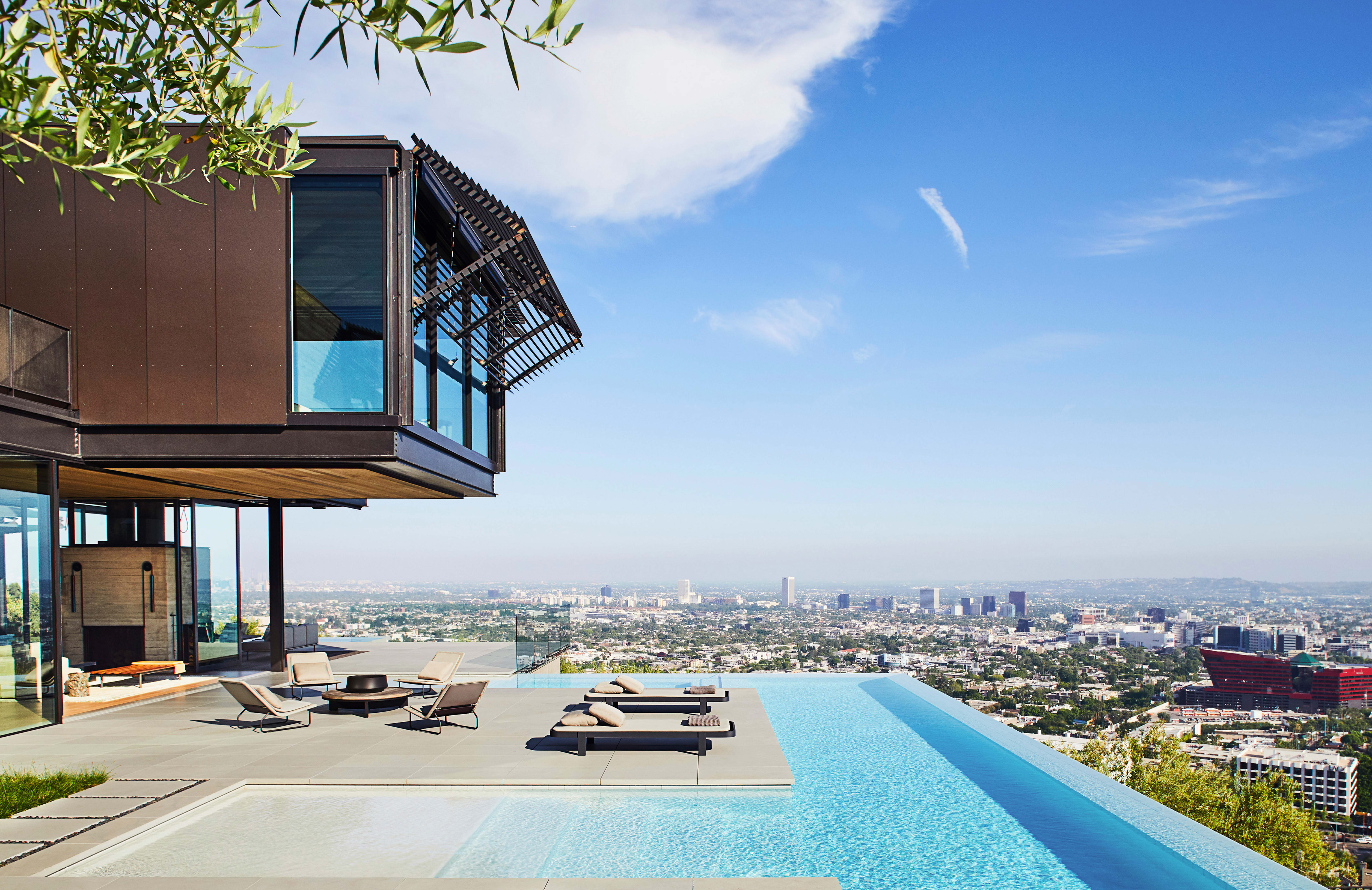 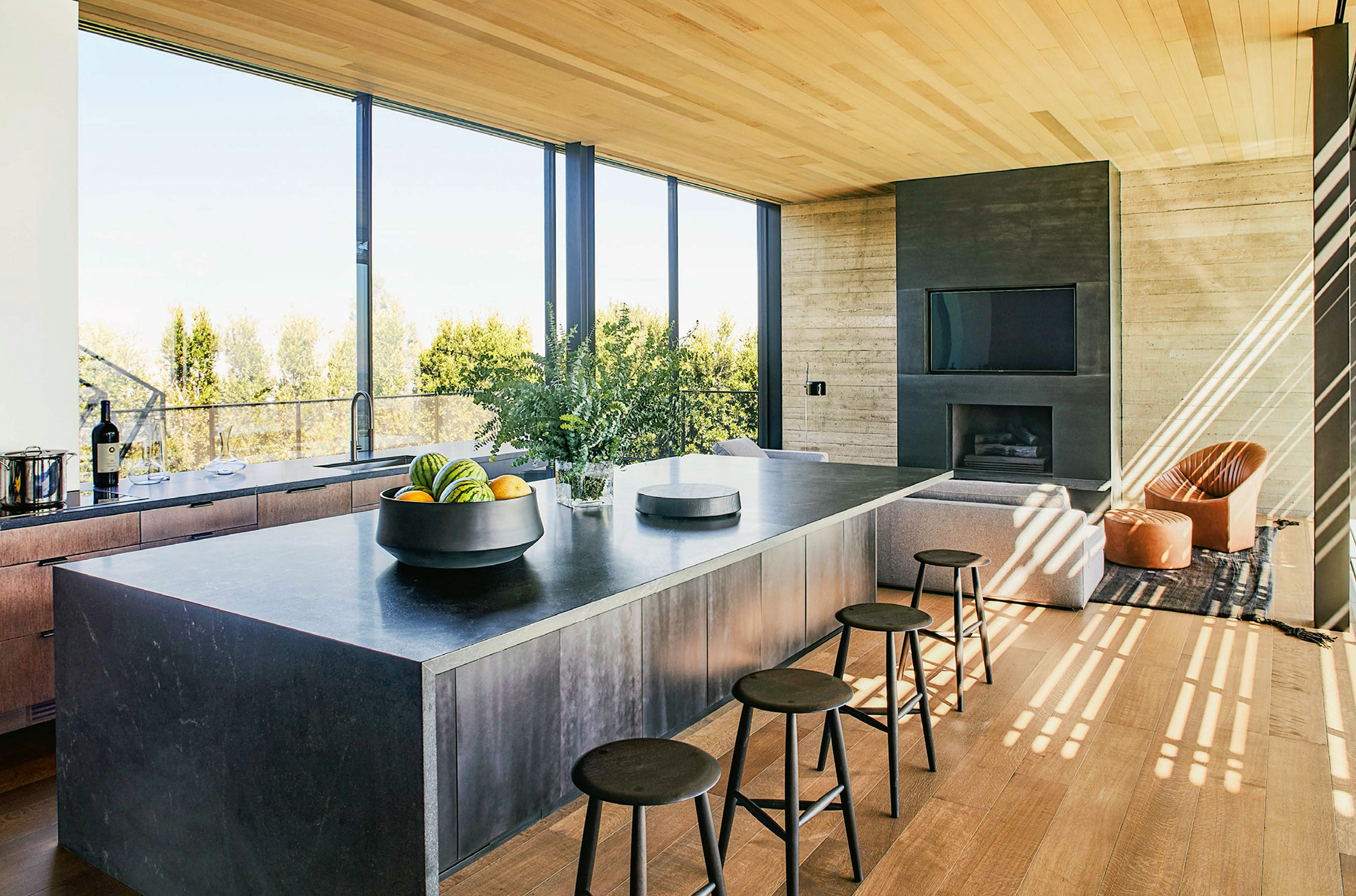 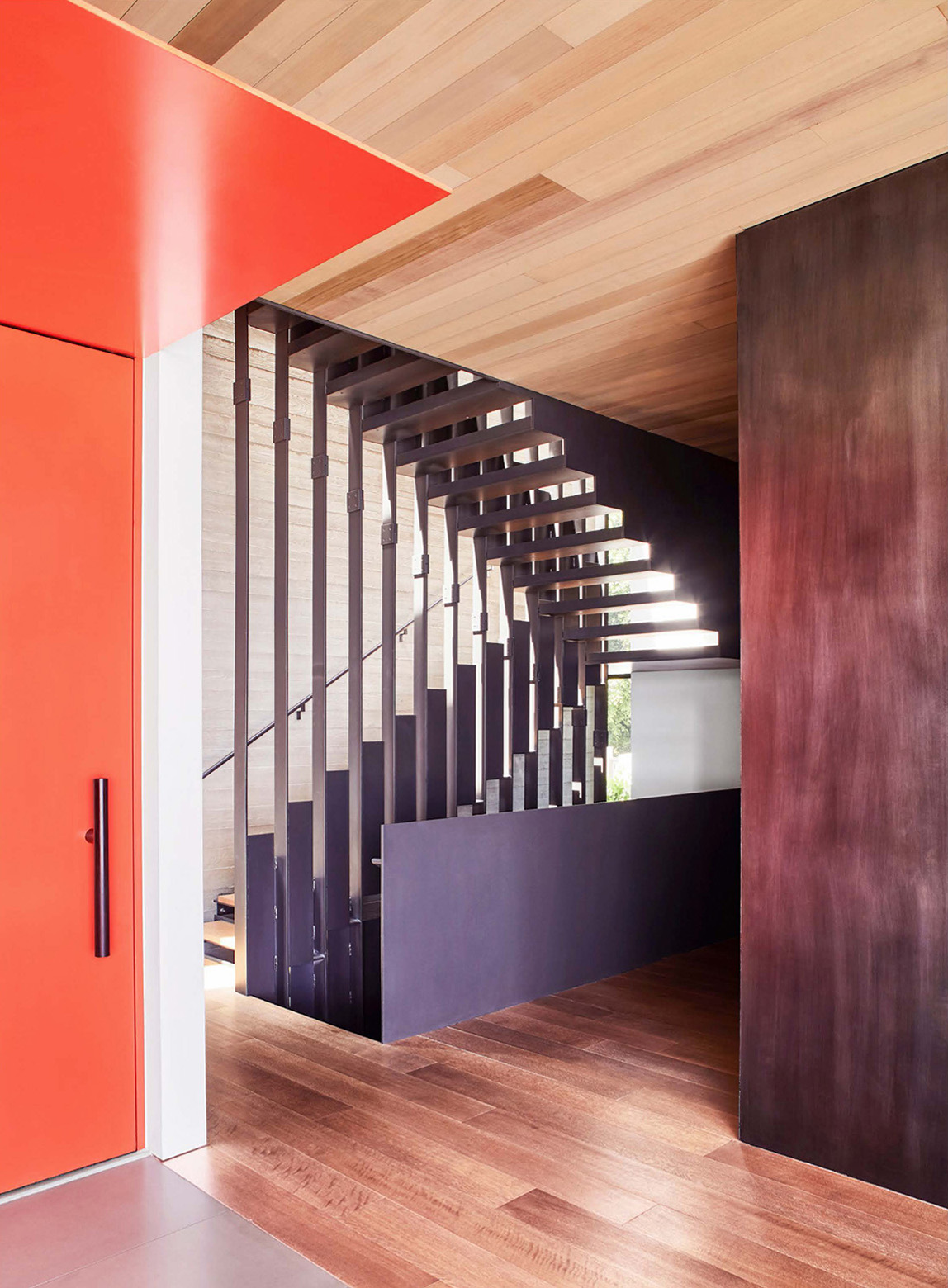 AN ORANGE PAINT BY LIMCO ADDS A POP OF COLOR TO A DOOR AND ITS OVERHANG. 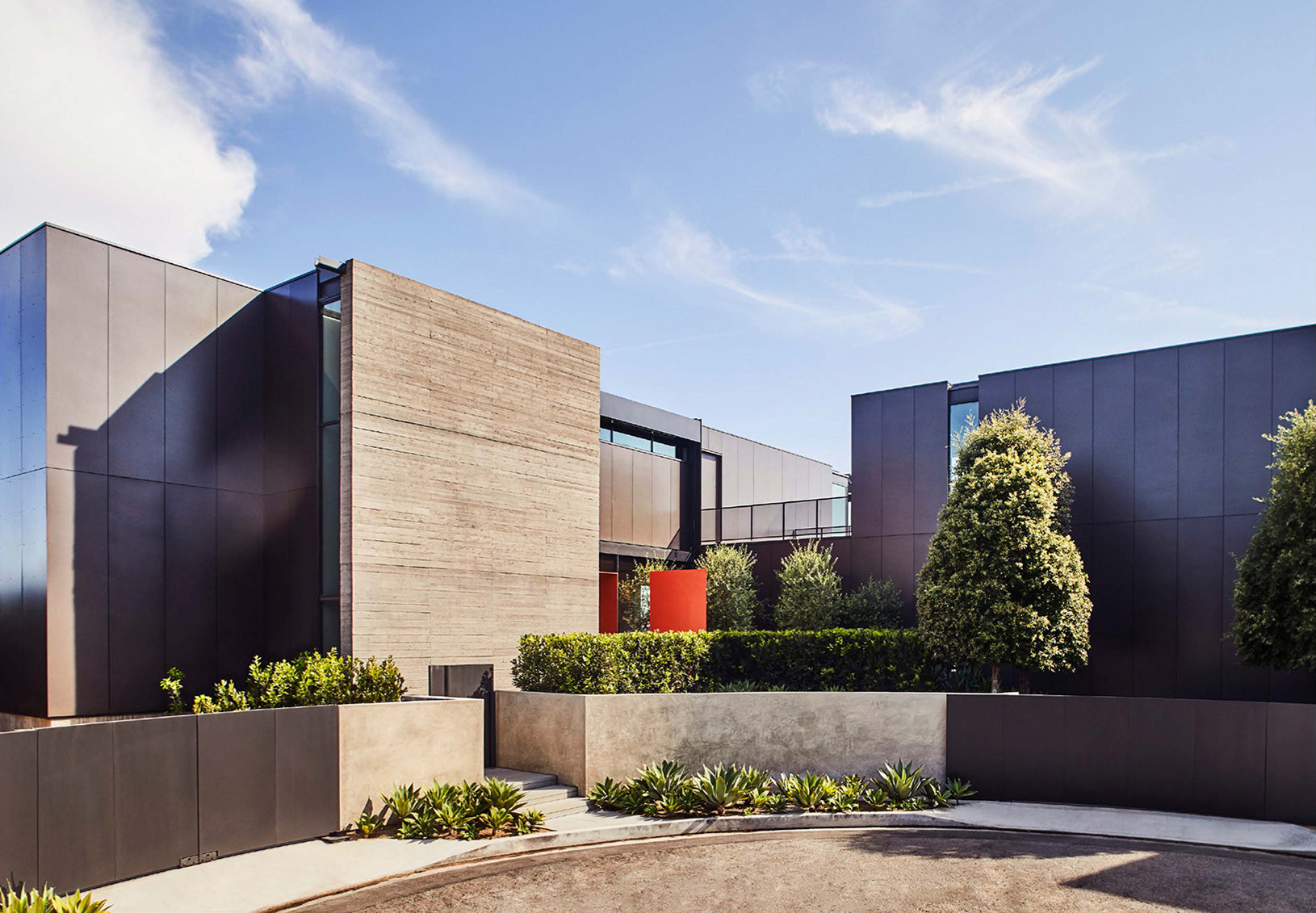 A ROUNDED DRIVEWAY BRINGS VISITORS TO THE HOME.

Kipp Nelson may not be settling down, exactly. But the high-octane Long Arc Capital partner—he’s raced cars, skied competitively, and also owns a chalet in Ketchum, Idaho, that The New York Times once likened to “the Playboy mansion transplanted into snow country”—has built a sleek Los Angeles residence that evokes Hugh Hefner less than Le Corbusier, the Swiss-French architect who famously described the modern house as a “machine for living in.”

Nelson, whose work regularly brings him to L.A. (where his longtime girlfriend, writer Tanya Akim, lives), had been looking to put down roots in the city for years. Disenchanted with its glut of “soulless whitebox spec houses,” he eventually turned his attention to building sites, settling on a promontory in the Hollywood hills with views that can fairly be described as explosive. “You have the Griffith Observatory on the left and the Getty on the right,” Nelson, tan and blond, pointed out in a recent FaceTime chat (he and Akim were vacationing in Turks and Caicos). Not to mention the entire Los Angeles basin in between.

A contractor Nelson knew introduced him to Olson Kundig, the Seattle-based AD100 firm known for its kinetic modern designs. His brief to them was twofold. “I wanted the indoors to flow to the deck, which flows to the pool, and then that flows out to the view,” he says, and, equally important, “I was going to be on my own or with Tanya most of the time I was there, but I also wanted the house to be capable of handling a party for 250.”

It’s hard to imagine a house with better flow than the one Tom Kundig, the principal on the project, fashioned for Nelson. “You don’t know where the inside stops and the outside starts,” the architect says of the three-story glass, steel, and concrete structure. (A sculptural staircase of painted steel links the living areas on the main floor to the master suite above and guest quarters below.) “The scheme is a series of relatively narrow and long boxes, so you’re always aware of the view of Los Angeles on one side and the yard on the other.”

The house is also ingeniously protean. “Levi, can you open the doors, please?” Nelson directs his maintenance manager from the phone. Levi hits a switch and the high glass sliders between the living area and a pair of shimmery pools on the view side of the property disappear. Other controls lower mechanical shutters that provide protection from the sun and the wind, and radiant panels that take the edge off chilly evenings.

Per the owner’s request that the home feel as comfortable for one as for many, access to the master suite can be shut off from the rest of the house, other rooms can be effortlessly combined and separated as needed, and two kitchens—one for catering and another that serves primarily as a hangout space—allow for flexible entertaining. “The house expands and contracts easily,” says Kundig. “There’s always something that feels more protected and something that feels more open.”

Despite the airy floor plan, the scale of the rooms is restrained—the highest ceilings are just over 11 feet—and a number of them look out onto an intimate courtyard or gardens. Nelson engaged Olson Kundig to oversee the decorating as well, and inside they relied on custom-designed furniture and lighting and large-scale contemporary artwork to seamlessly unite architecture and interiors.

Cantilevered above the house, the master bedroom is a sexy lookout tower—cozy in scale but open to the views on three sides. The bathroom also features a glass wall, “so you can expose yourself to L.A. if you want,” Nelson quips. A rooftop terrace off the bedroom offers the biggest vistas (“close to 320 degrees,” notes Kundig), and an outdoor walkway leads to a high-tech gym.

The man cave is downstairs, where, in addition to a wine cellar and a media room, there’s an “auto gallery” to display Nelson’s car collection, which ranges from a Porsche racing car to a Dodge Coronet muscle car. An adjacent room contains a Formula One simulator and will soon hold a slot-car racetrack that replicates, at 1/24 scale, famous courses around the world. But even down here, the connection to the outdoors remains strong, thanks in part to the 40 olive trees planted by Clark and White Landscape below the house.

The end result is a machine for living in, then—and also for playing in. When Nelson’s in town, the place tends to fill up quickly with friends. “The only rule,” he says, “is you can’t dive from the bedroom to the pool.” 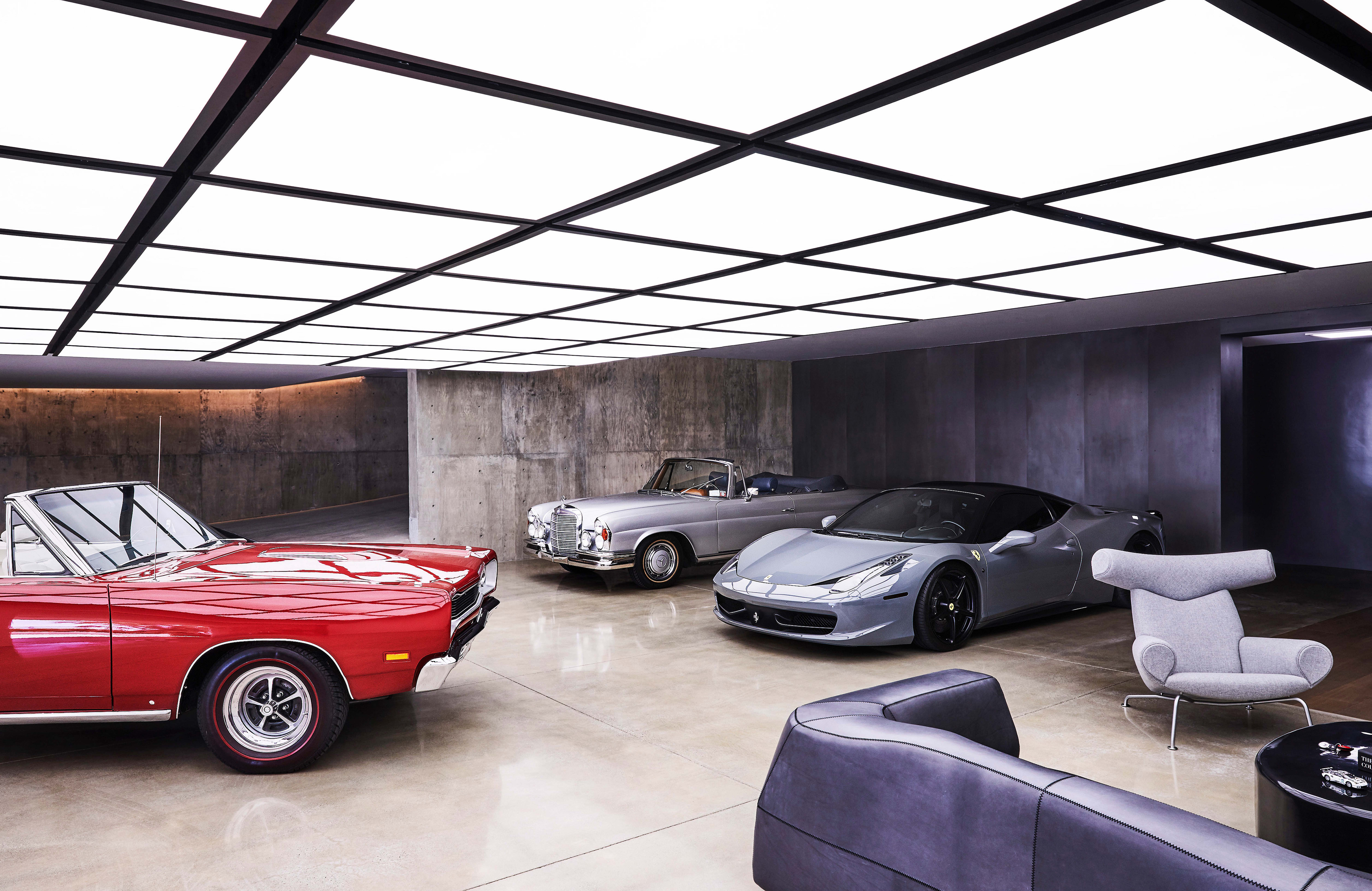 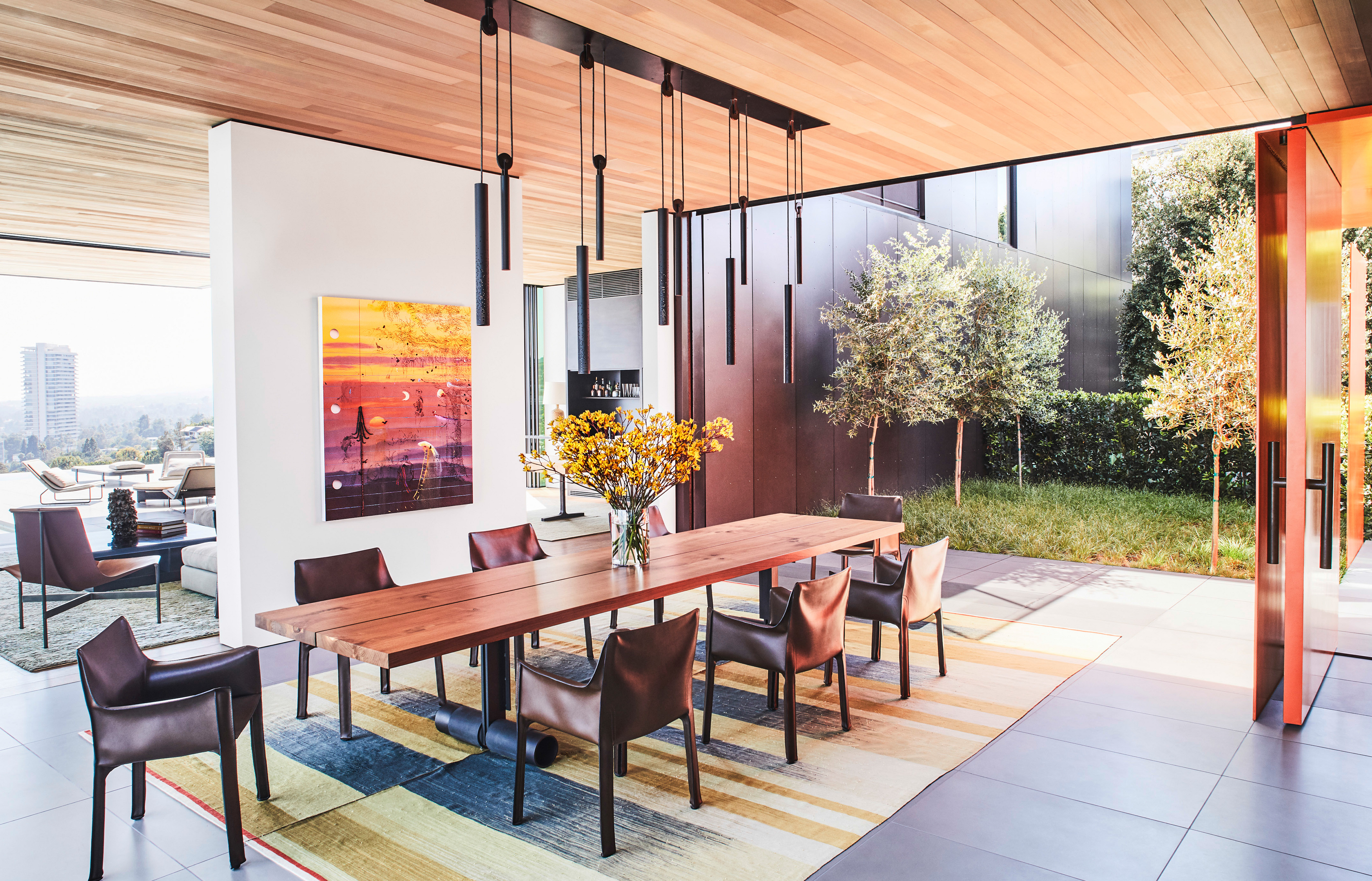 IN THE DINING ROOM, LIGHTING BY TOM KUNDIG COLLECTION HANGS OVER A CUSTOM TABLE WITH CASSINA ARMCHAIRS. BESPOKE RUG; ARTWORK BY FRIEDRICH KUNATH. 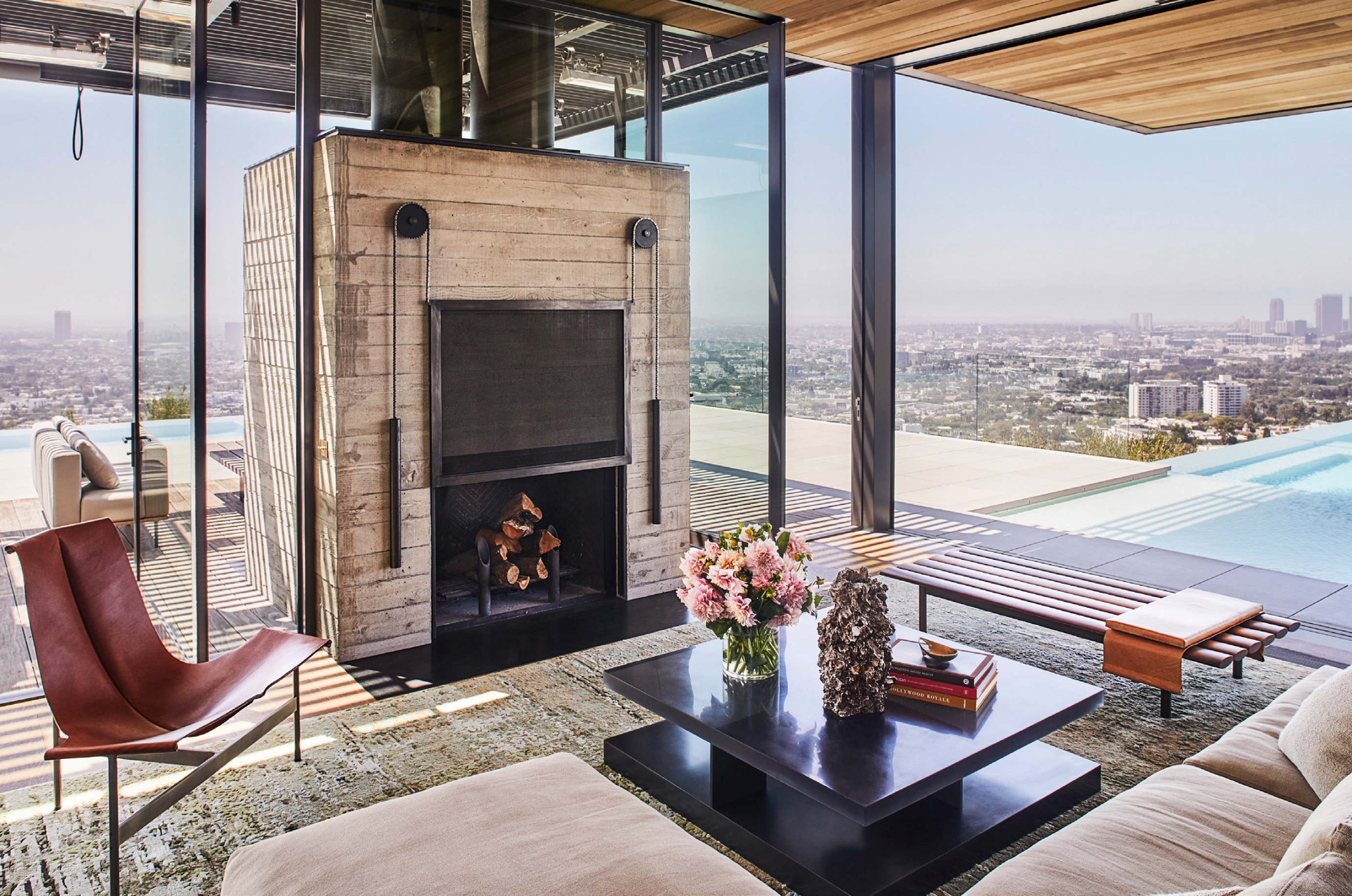 A CUSTOM DOUBLE-SIDED FIREPLACE OPENS TO THE LIVING ROOM AND SOUTH TERRACE ON ITS REVERSE. CHAIR FROM BDDW; CUSTOM COCKTAIL TABLE AND DAYBED. 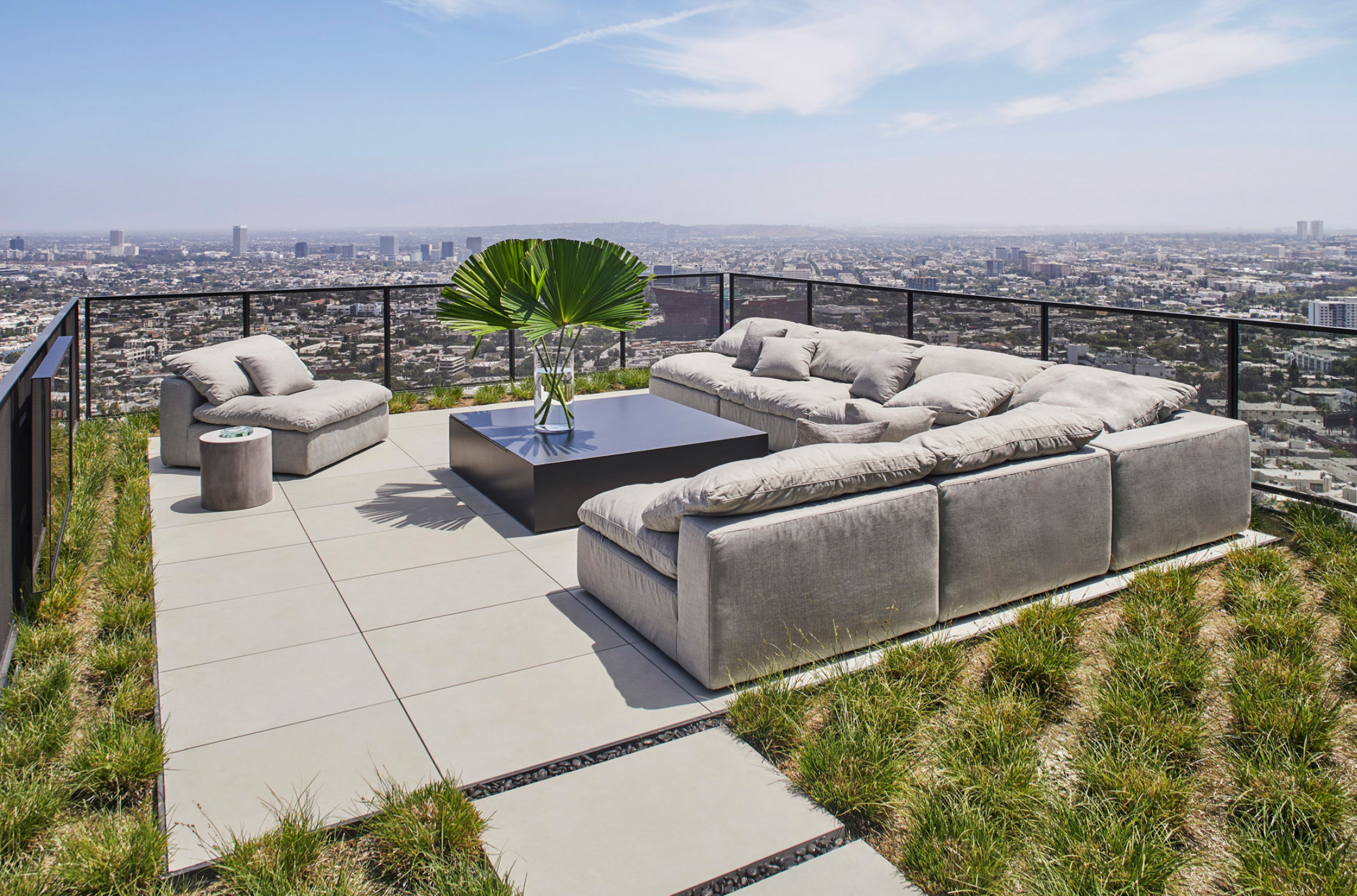 A CHAIR, SIDE TABLE, AND SOFA BY RH DECORATE A TERRACE. BESPOKE CONVERTIBLE FIREPIT/COCKTAIL TABLE. 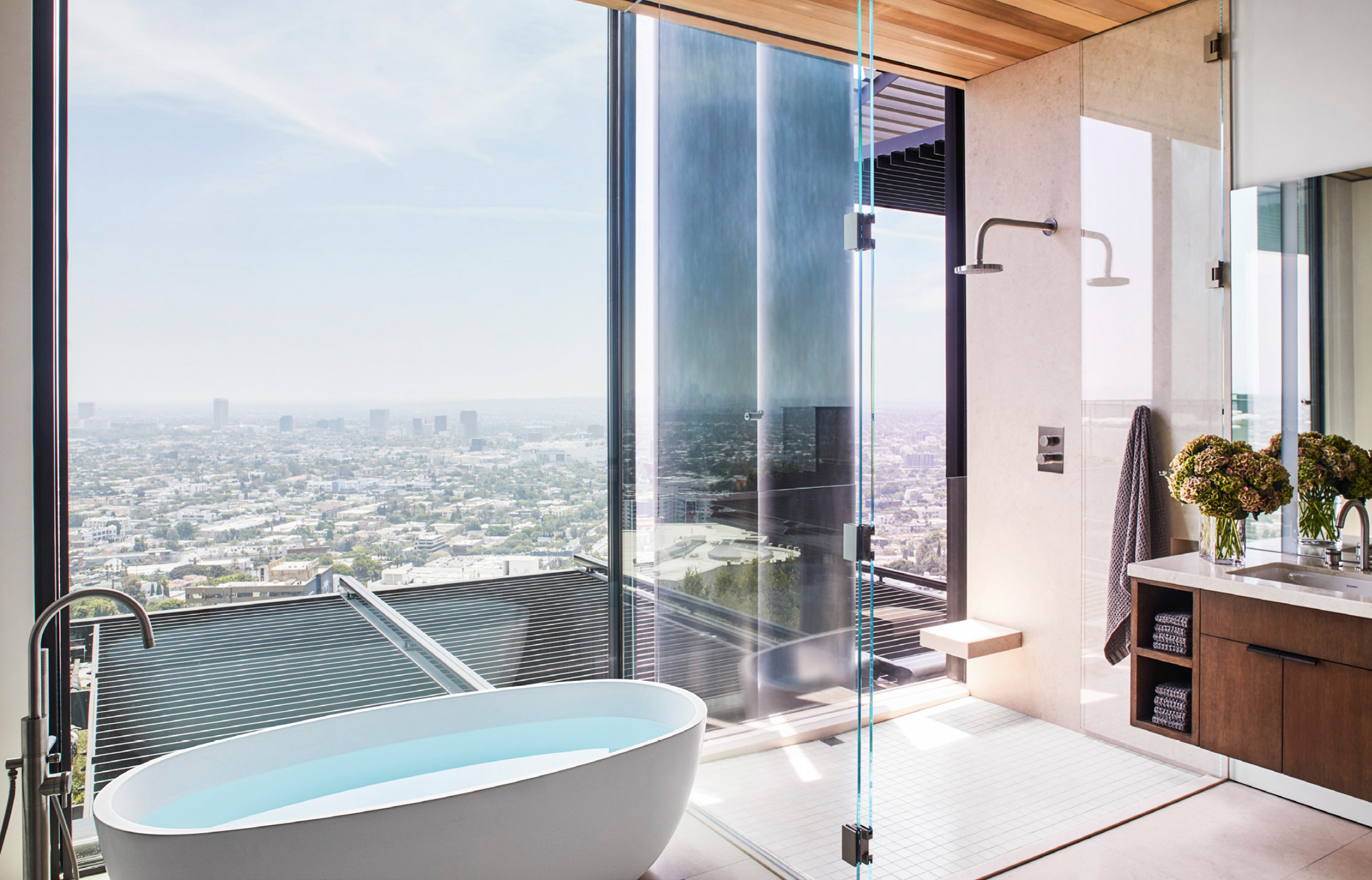 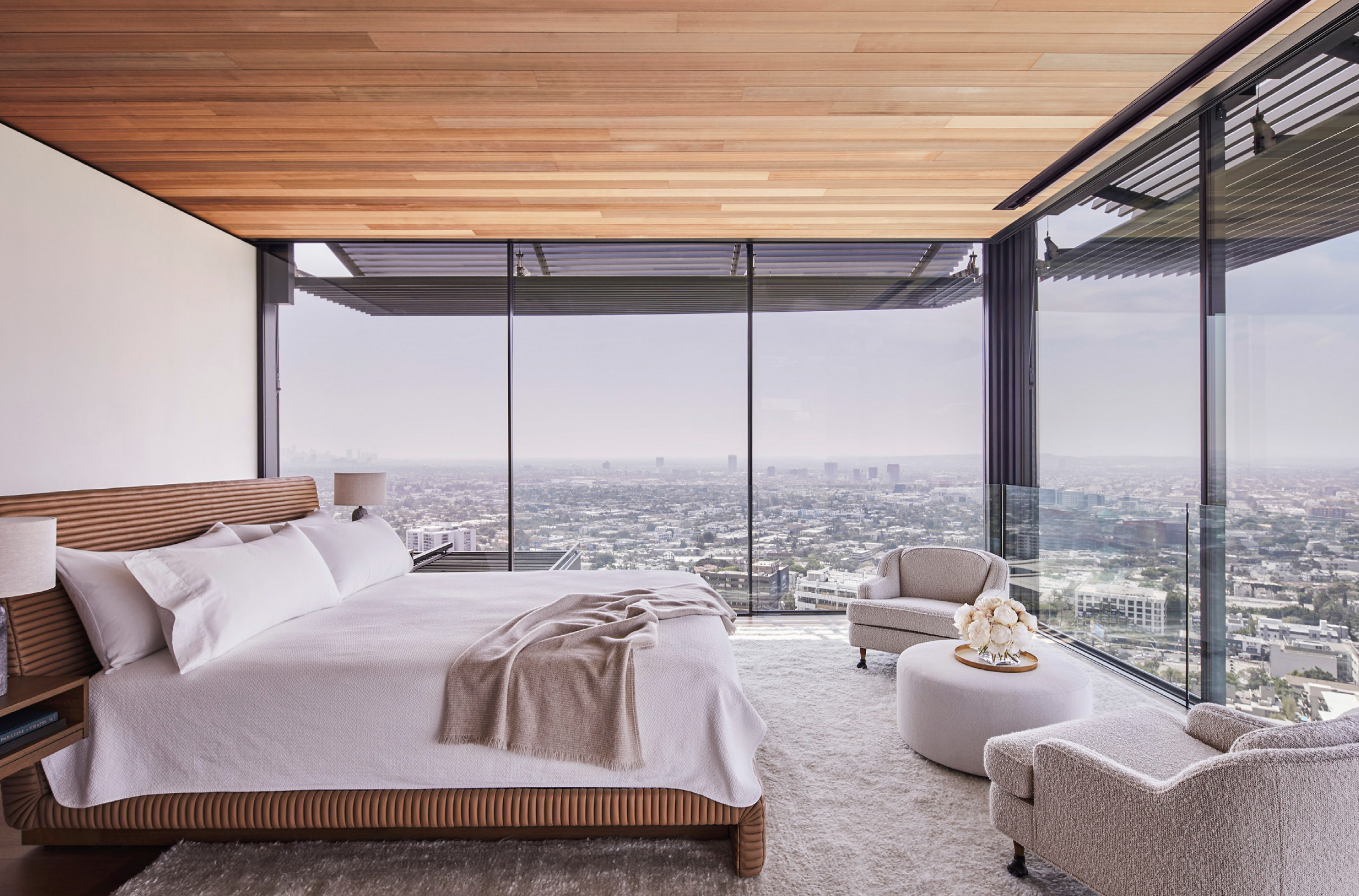 IN THE MASTER BEDROOM, THE BESPOKE BED IS COVERED IN A LEATHER BY ASHBURY HIDES. VINTAGE ARMCHAIRS. 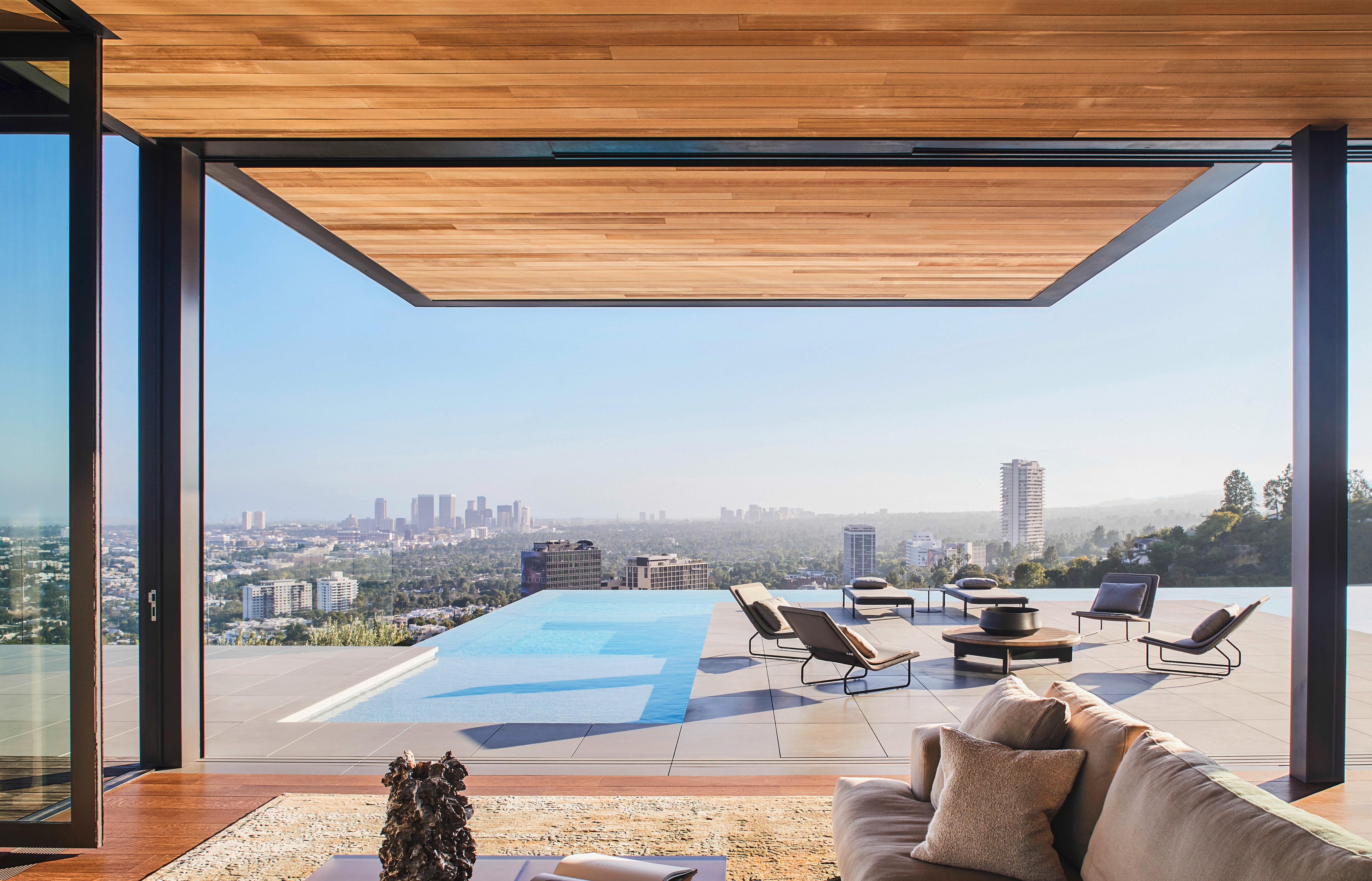 FROM THE LIVING ROOM, SLIDING GLASS DOORS CAN OPEN TO THE POOL TERRACE, WHERE THE MASTER BEDROOM CANTILEVERS OVERHEAD.
■