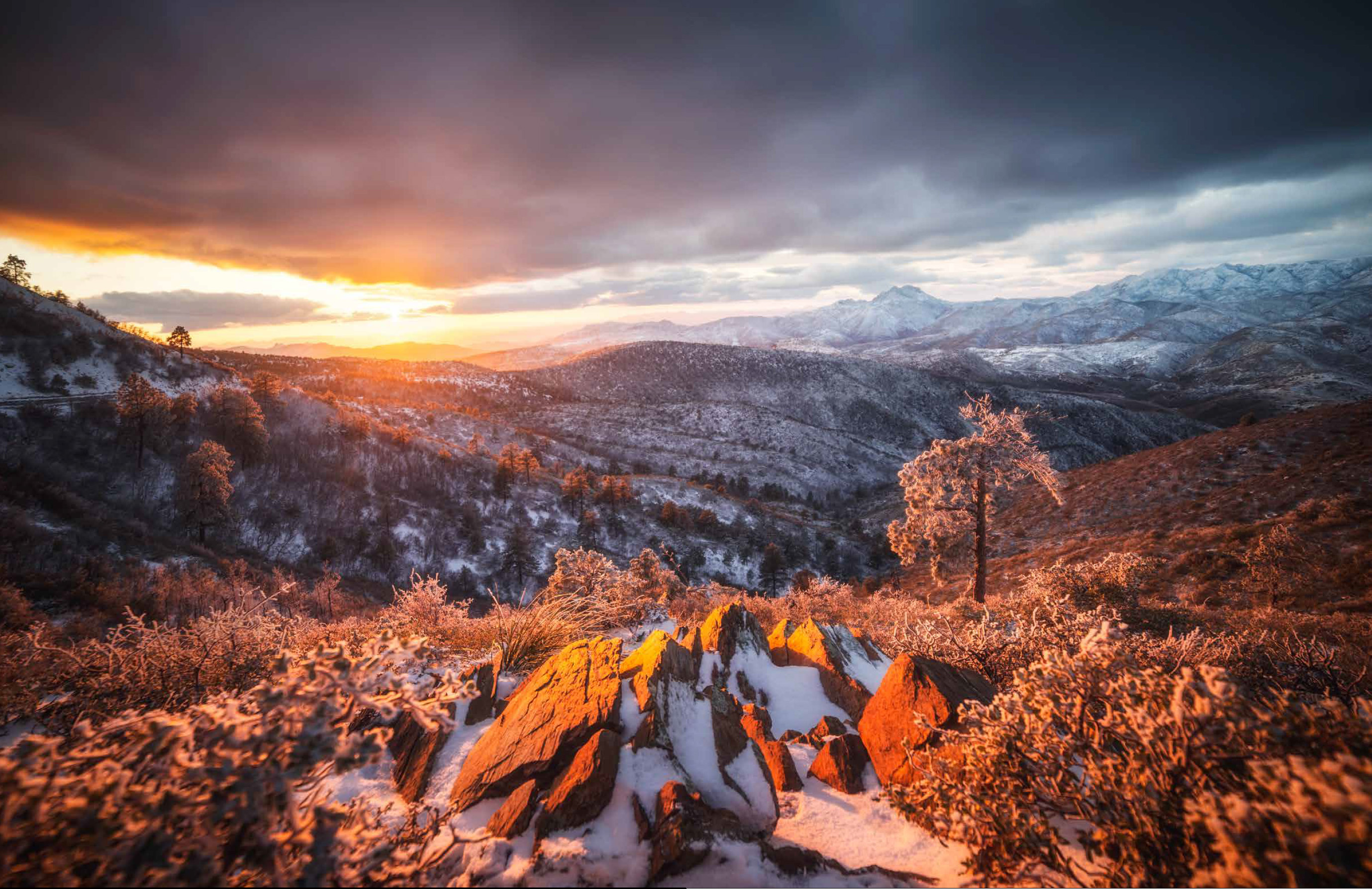 Mount Ord, northeast of the Phoenix area, offers a spectacular and snowy view of a Christmas Day sunset. “The first thing that grabs me is the light and how it interacts with the landscape and the clouds,” says Arizona Highways Photo Editor Jeff Kida. “The angle of the light creates contrasting textures in the jagged rocks and the soft clouds, and the warm tones of the rocks contrast with the cooler tones of the clouds and the snow. I also like how Sara placed the horizon high in the frame, then used the foreground to lead the viewer to the payoff, the sun itself.”

GREAT EGRETS IN THE MIST

Mist cloaks four great egrets at the Riparian Preserve at Water Ranch in Gilbert. “I like foggy scenes, probably because we don’t see too many in Arizona,” Kida says. “Tam cropped this to take away any extraneous elements, so all you see are the birds and their forms. And one of the birds is in a slightly different stance, which really helps make this shot special. It’s a great image that’s easy to look at, and she hung in there on a murky day when a lot of photographers would have called it quits.”

REFLECTIONS AT THE LAKE

“Really, this is an image about form,” Kida says of this photo of a lake in the White Mountains of Eastern Arizona. “The reflection of the clouds in the calm water of the lake is what dominates the shot, and I like the thin layer of fog that divides the reflection from the surrounding landscape. It’s a slightly otherworldly view, and the rock in the foreground acts as an anchor — a starting-off place from which the viewer’s eye can move through everything else.” 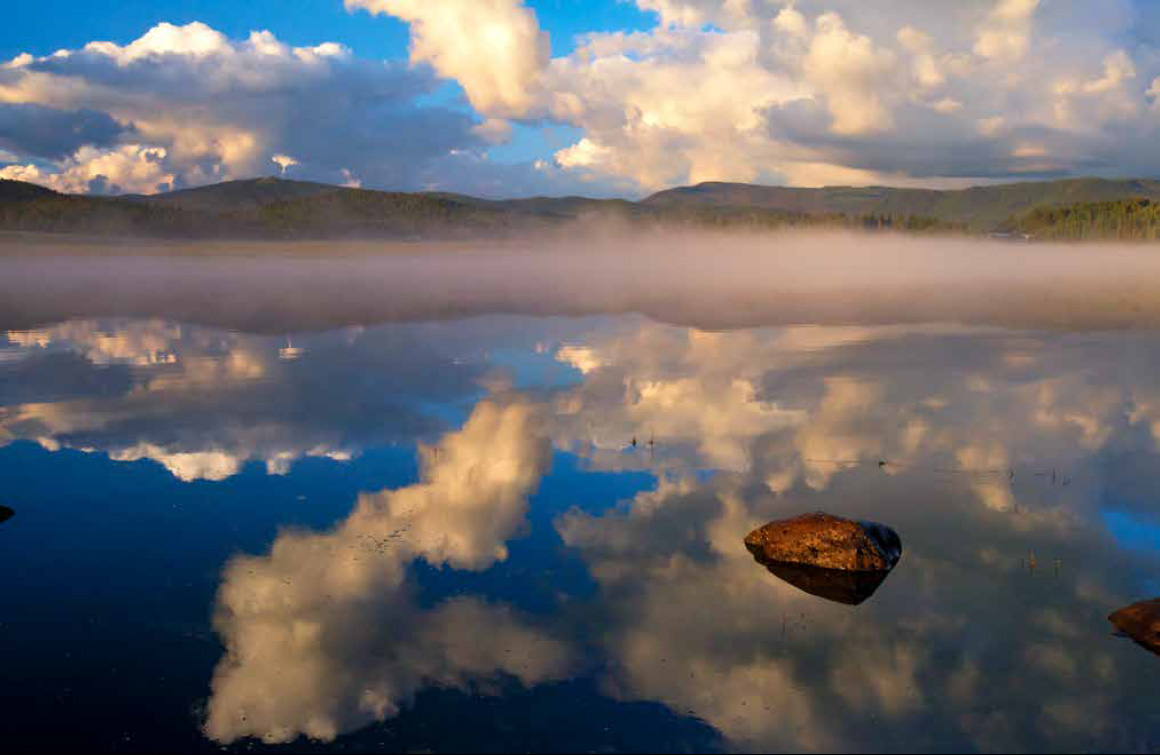 An immaculate agave contrasts with the red rocks of the Sedona area at sunrise. “There’s an interesting juxtaposition between the agave and the sunrise,” Kida says, “and they’re offset by a triangular peak in the upper right, so there are a number of elements that move your eye around. It’s about shape, texture and a little bit of color.” 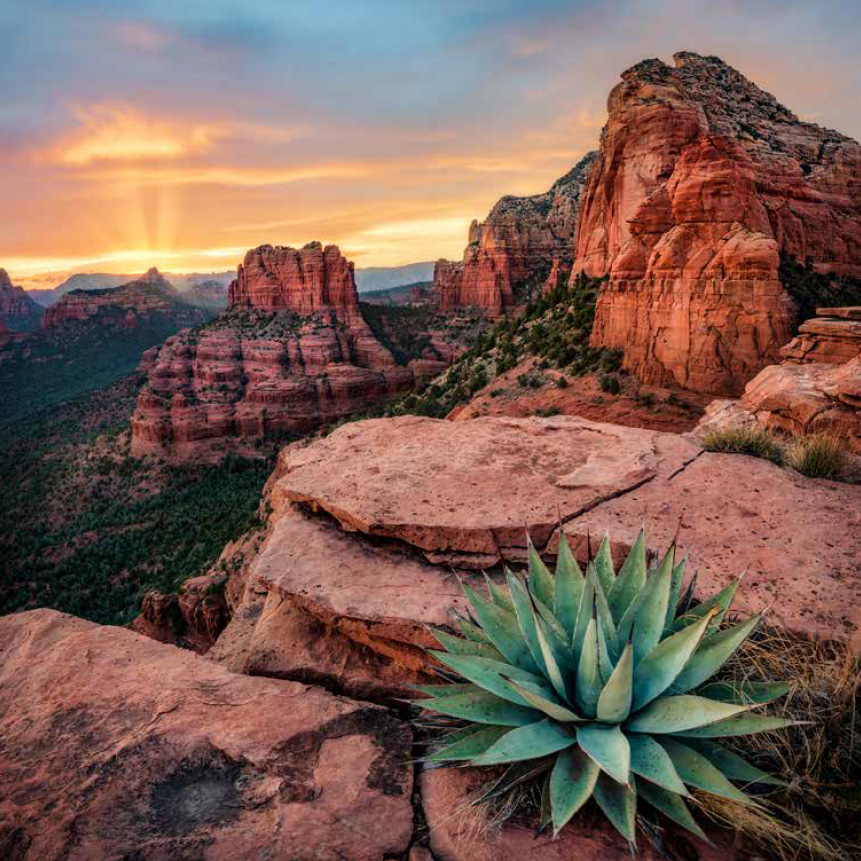 Coyote pups take up residence in drain openings at a Tucson golf course. “It’s just a great catch,” Kida says. “I don’t know if Leslie researched the image or was just walking by, but you couldn’t plan something like this. It’s nature meeting an urban structure, and there’s a certain amount of whimsy to it.”

Zebra-tailed lizards face off in the Sonoran Desert near Tucson. “Everyone who looked at this photo cracked up,” Kida says. “So often, still photos are about frozen moments, and this is one of those. Additionally, the soft light accentuates the details of the lizards and the colors of their scales.” 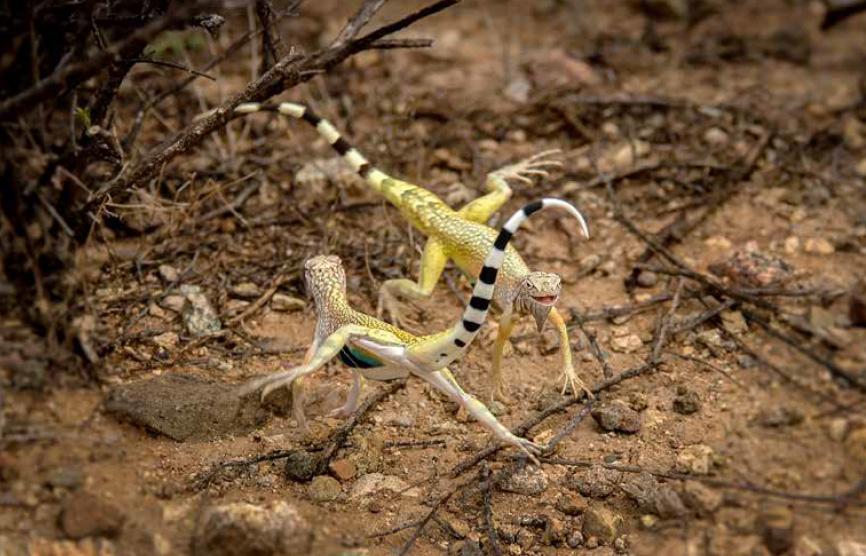 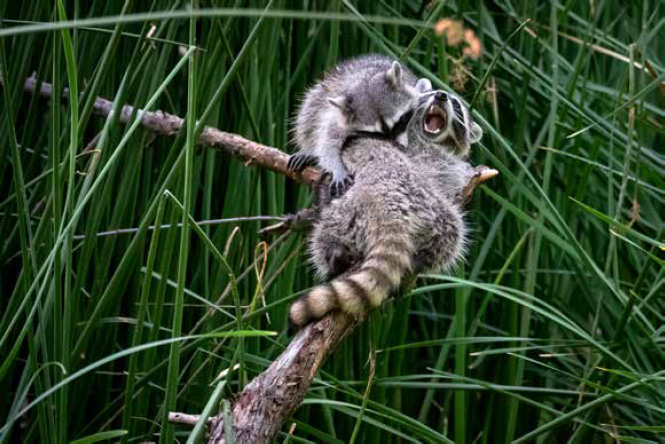 “I don’t know how long Jeffry had to wait for this shot, but it’s a wonderful moment,” Kida says of this raccoon tussle at Tucson’s Sweetwater Wetlands. “A lot of wildlife photos can be pretty static, but if you sit with something long enough, good things can happen. He also used a long enough lens to avoid disrupting the activity.”

Willcox Playa, a dry lake in Southeastern Arizona, offers a mountain view at sunset. “Sometimes, photographers get caught up in filling the frame with as much material as we can,” Kida says, “but there’s a beautiful simplicity to this photo. It’s reminiscent of the work of the painter Maynard Dixon, to whom some of us on staff refer when we talk about this shot.” 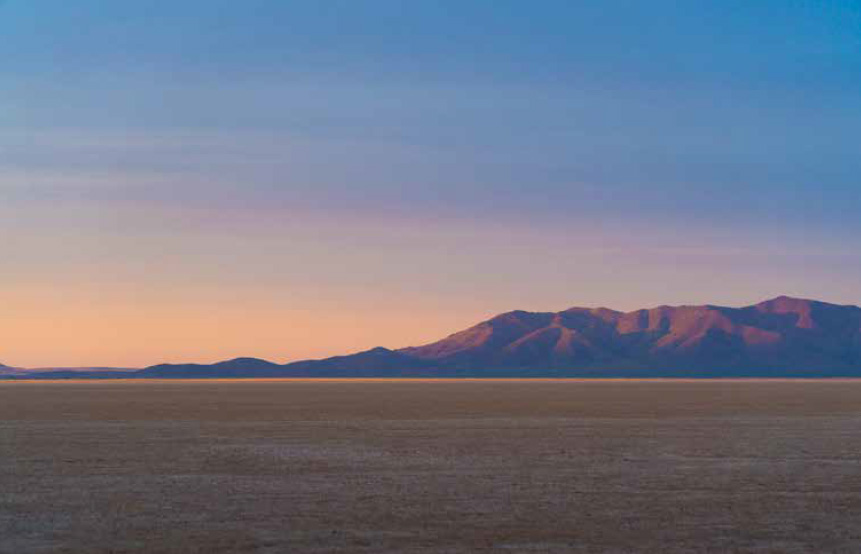 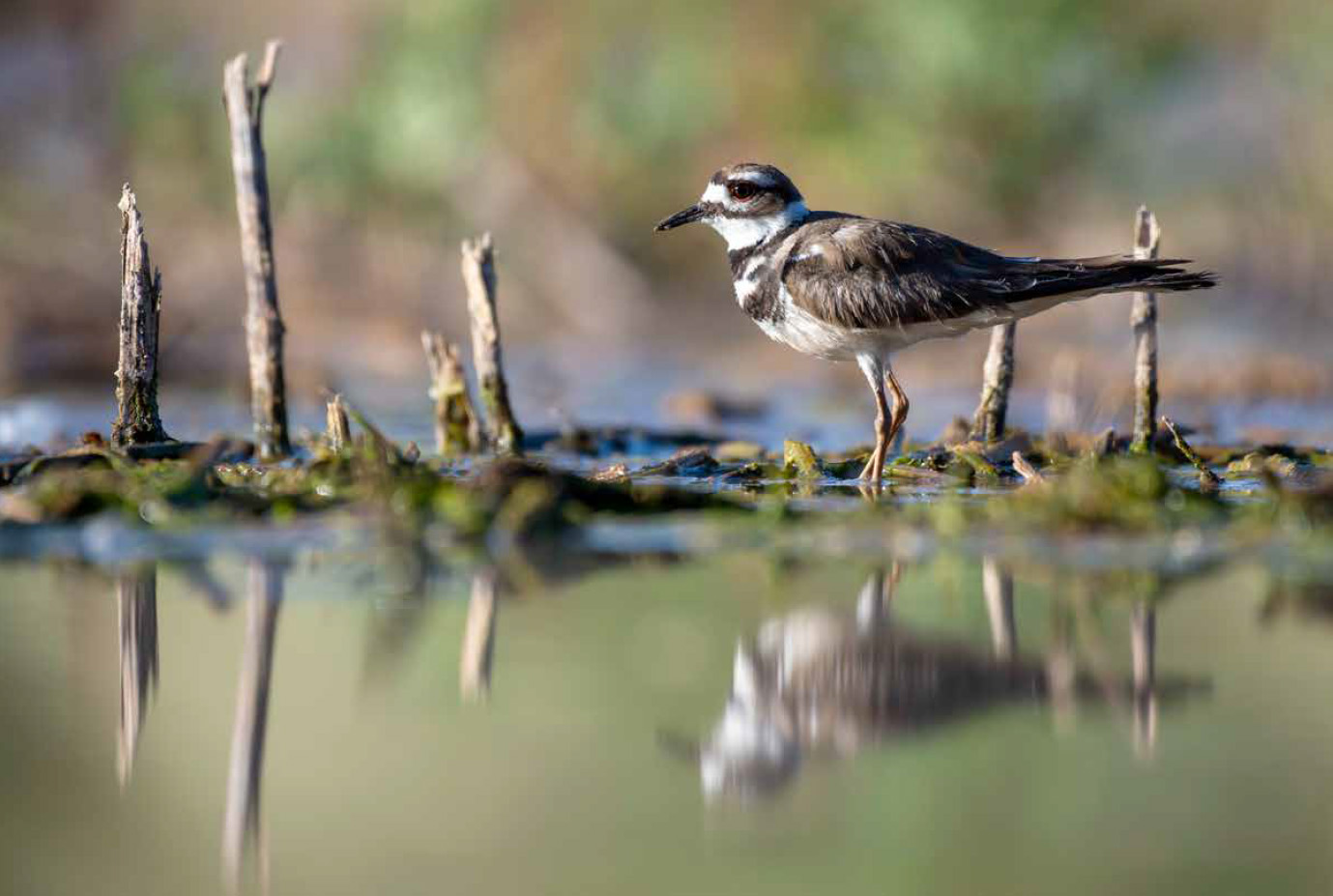 A killdeer is reflected in the marshy water of the Riparian Preserve at Water Ranch in Gilbert. This photo took the top prize in this year’s Adventures in Nature Student Photo Contest, which was sponsored by The Nature Conservancy, Cox Communications and Arizona Highways; Arizona students ages 13 to 18 were eligible to enter. “Sean was literally lying in the dirt, at eye level with the bird, to make this shot,” Kida says. “More than anything, that’s what I like about this shot. Most people have a tendency to shoot things from their own eye level, so a different angle makes a big difference: It provides not only a different perspective, but also an interesting reflection.”