DRAWN TO THE CITY 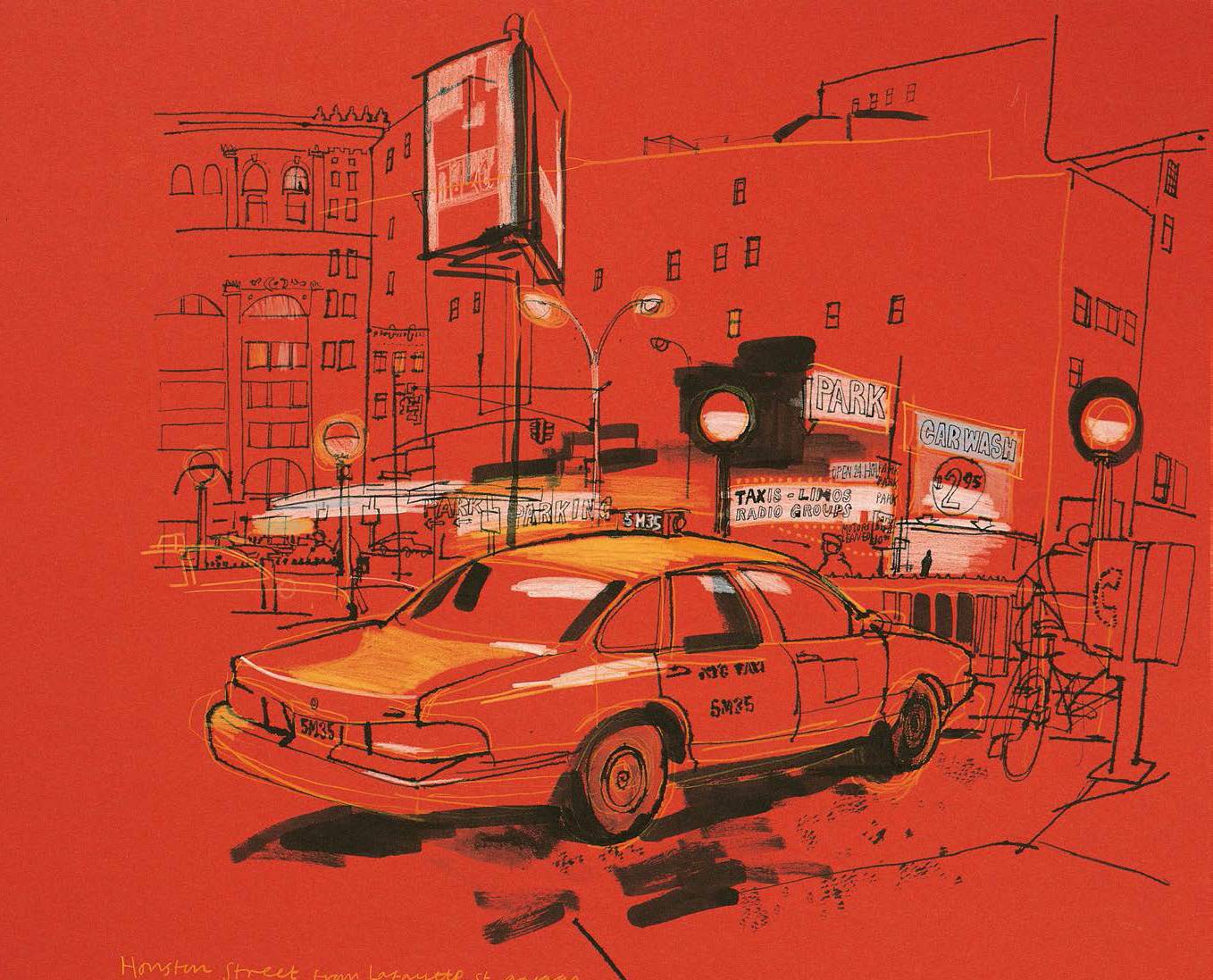 It turned out it was a doubly strange and poignant day to be talking to the acclaimed illustrator Lucinda Rogers about her latest project. For starters, when we arranged to meet in a canal-side café around the corner from her East London studio to discuss her new crowd-funded book of drawings of New York, neither of us had clocked the fact that we were doing so on a date that will forever be etched into that city’s history: September 11th. 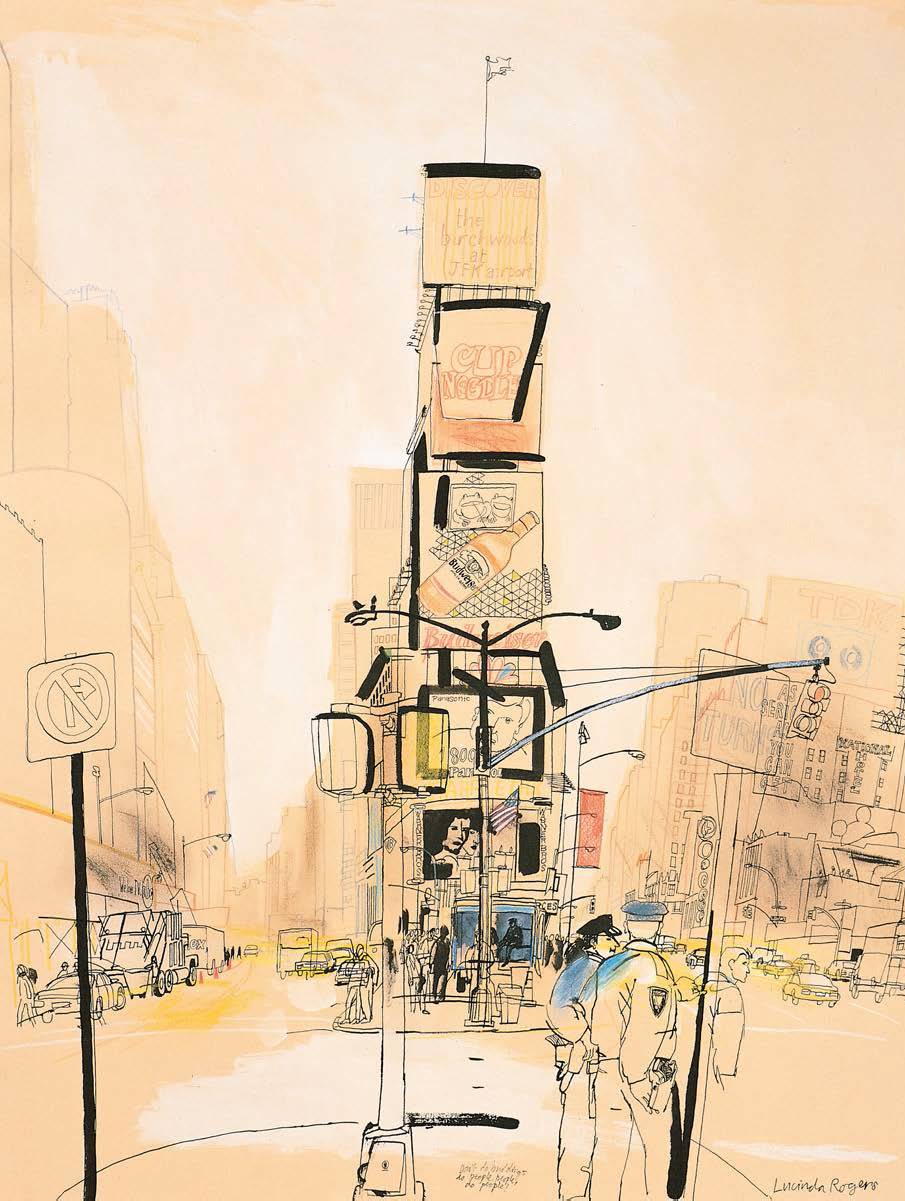 Discover the Birchwoods at JFK Airport, ink, crayon and gouache on paper, 65x50cm

Not only that but Lucinda has barely settled down with her coffee when she also discovers that one of her key early inspirations for the project has just died. The Wiltshire-born illustrator made her first trip to New York in 1988, intoxicated before she arrived like thousands of others on a cocktail of imagery drawn from art, film, television and photography. “I think it is quite romantic,” she says. “It’s an extraordinary thing that we know this city so incredibly well, whereas if I said to you, ‘what does Canberra look like?’, would you immediately conjure that up?”

One key influence, she notes, was the legendary Swiss photographer and creator of the iconic 1958 photobook The Americans, Robert Frank. Unbeknownst to Lucinda, he had died two days previously. She appears genuinely moved by the news. “He was such a huge influence and I always think of him most in terms of composition. I had all of his images of New York in my head and, when I got there, I saw them all in three dimensions.”

After that first brief visit to New York, Lucinda says a switch flicked in her head and she knew she wanted to draw the city. She returned in earnest in 1990, staying for three months and finding herself drawn to the “interesting juxtapositions” alive on every street corner, an interesting shop sign set off by a funny little building.

Lucinda begins each drawing with preliminary sketching using water-based coloured crayons before more emphatic lines are drawn over this with dip pens, brushes and Higgins inks – the only brand she is particular about. Surprisingly, the thicker black lines that surround the focal points are not added later for emphasis, but rather laid down early to provide “the key to the picture”. Select flashes of colour are then applied with watercolour or gouache.

One of the many brilliant aspects to Lucinda’s art is the economy of marks. She can spend up to 12 hours on a single drawing, yet each composition never feels over-worked. The restless energy of the city is captured not in an overload of detail, but rather through a choice series of purposeful, dynamic marks. Like JMW Turner strapping himself to the ship’s mast to capture the sublime light of a thunderstorm, so Lucinda settles in the eye of the midtown traffic and somehow conjures a mindful impression of her time in the city. 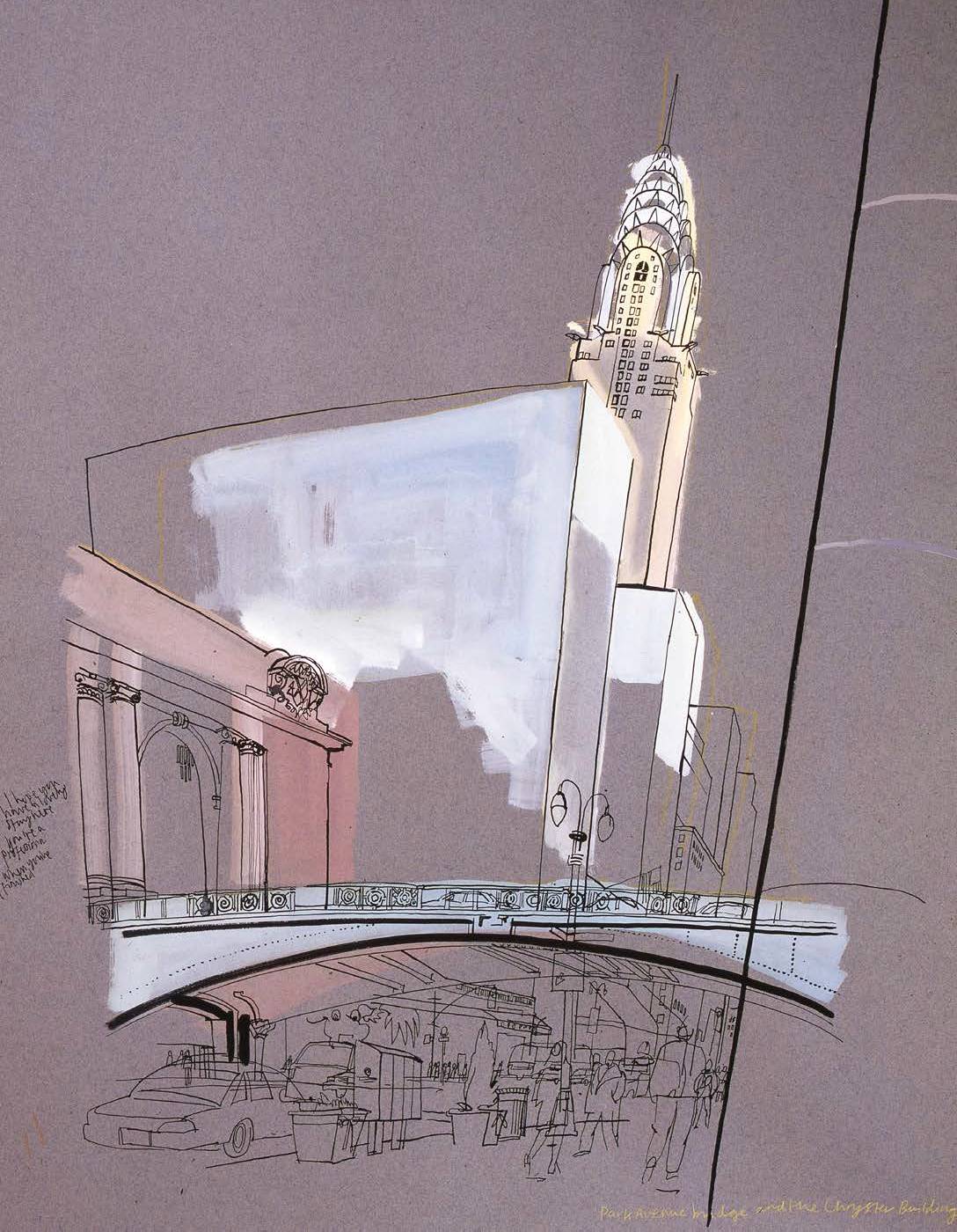 Grand Central and the Chrysler Building, ink, crayon and gouache on paper, 62x47cm

Over the years, the St Martin’s School of Art graduate has illustrated everything from Habitat catalogues and V&A reports to cookery books and regular columns in publications such as The Independent and Country Living. Though she has coincided commissions with personal trips to New York, she is reluctant to admit that her drawings of the city were done for pleasure. “I think the word ‘pleasure’ is a slightly funny one, for my own practice at least,” she explains. “I wouldn’t really call it ‘pleasure’, it was just a need to create something. But essentially yes, they weren’t for a commission and I’ve always thought that that makes a very big difference. Even when you get a really good art director who says go off and do what you want to do, you’re still conscious of that person or what it is for. With the New York drawings, I used to just take the pictures home and put them in a drawer.”

One of her most memorable visits to New York came in the aftermath of the 9/11 terrorist attacks in 2001. Lucinda spent time drawing the World Trade Center site, which became known as Ground Zero. “It was a strange experience because it was like looking at the lack of something. Before [9/11] you would look down a street and see the Twin Towers, but now you wouldn’t see anything. How do you draw that?”

She began answering the question by focusing on the detritus surrounding the cordoned-off site, completing drawings of trucks loaded with bent metal. A friend in the clergy then invited Lucinda to St Paul’s Chapel, a nearby episcopal church that served as a place of rest and refuge to workers. It was here that the focus of her drawings shifted towards the human responses to the atrocities. 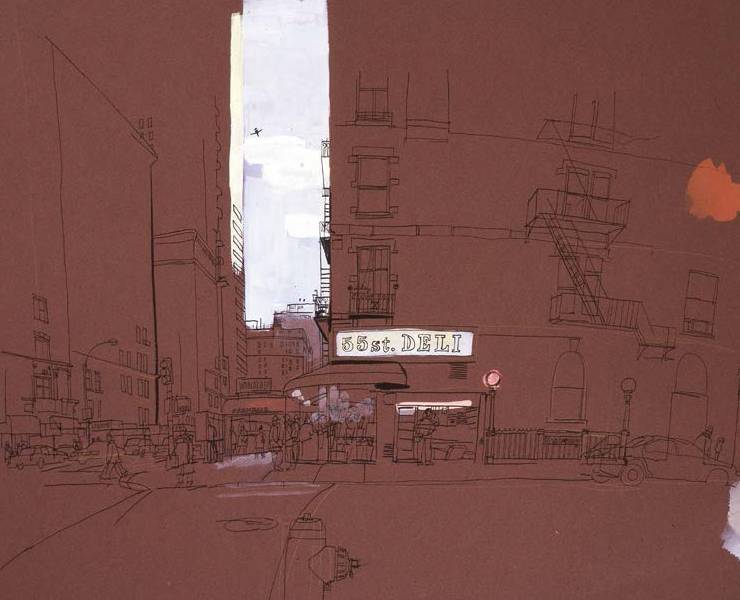 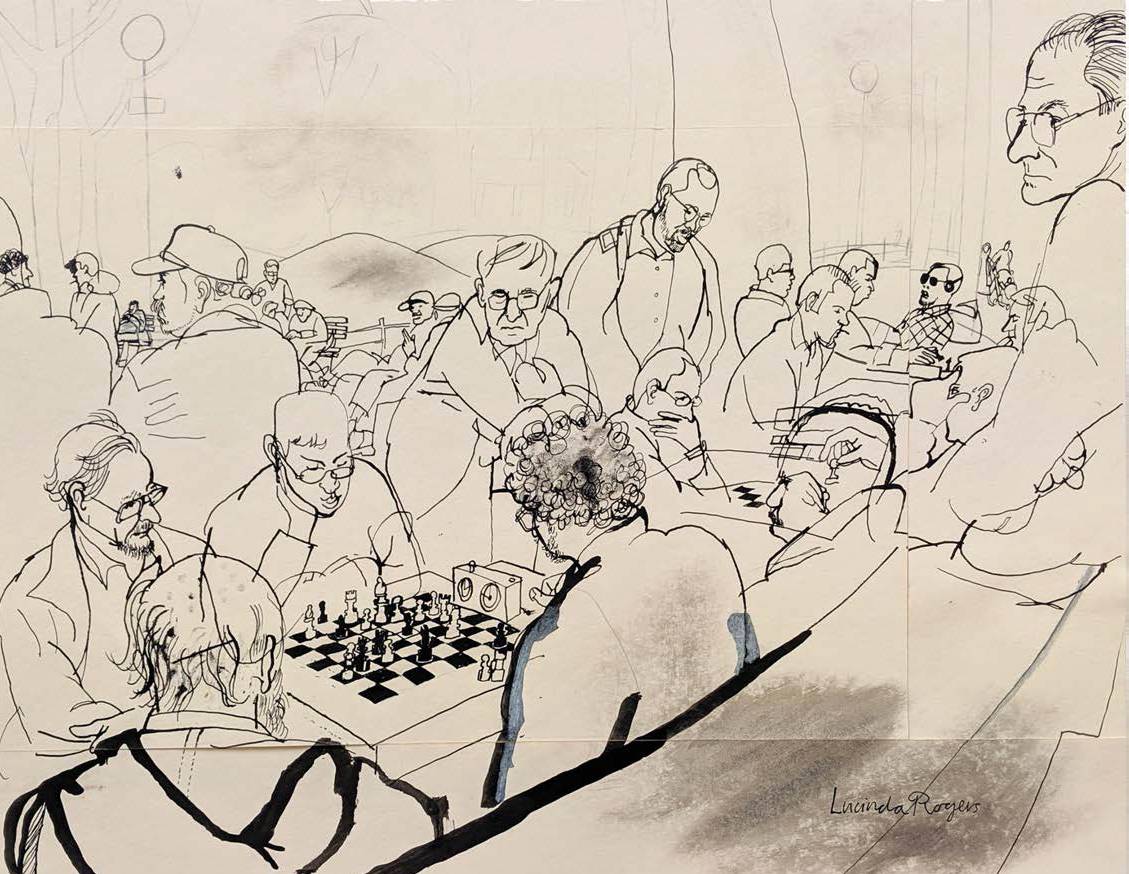 Though nothing else in her portfolio before or since was borne of such devastating tragedy, the 9/11 drawings fit into a wider theme in Lucinda’s portfolio of the ever-changing nature of cities. Many of the subjects in her early drawings of London and New York no longer exist and she has tackled the effects of gentrification in many of her works too. She struggles to engage artistically with what she calls “spreadsheet architecture”, the large geometric buildings with “no human qualities” that could be drawn with a ruler, though she makes an exception for the skyscrapers on 6th Avenue near to the Museum of Modern Art and the Radio City Music Hall. “I’ve always found that part of New York rather thrilling,” she says.

A recent commission for the House of Illustration back in London saw Lucinda complete a portfolio of drawings of Ridley Road market, a vibrant local community being threatened by gentrification. Once a subject is decided upon for a commission such as this, she says it is important to then approach it like an artist and make decisions about what to leave in or out: “Otherwise you are like a photographer for a local newspaper and you have to go and ‘get’ the exact picture, which is quite limiting.”

When Lucinda finally decided to pull the New York drawings out of her drawer, she worked with designer Simon Esterson to make a prototype that she took to several leading book publishers who fretted about print costs and whether Lucinda had a sufficient following on social media. Undeterred, she took matters into her own hands and launched the project on the crowd-funding website Kickstarter back in June. “I had faith that I could find 1,000 people to buy this book,” she says proudly. 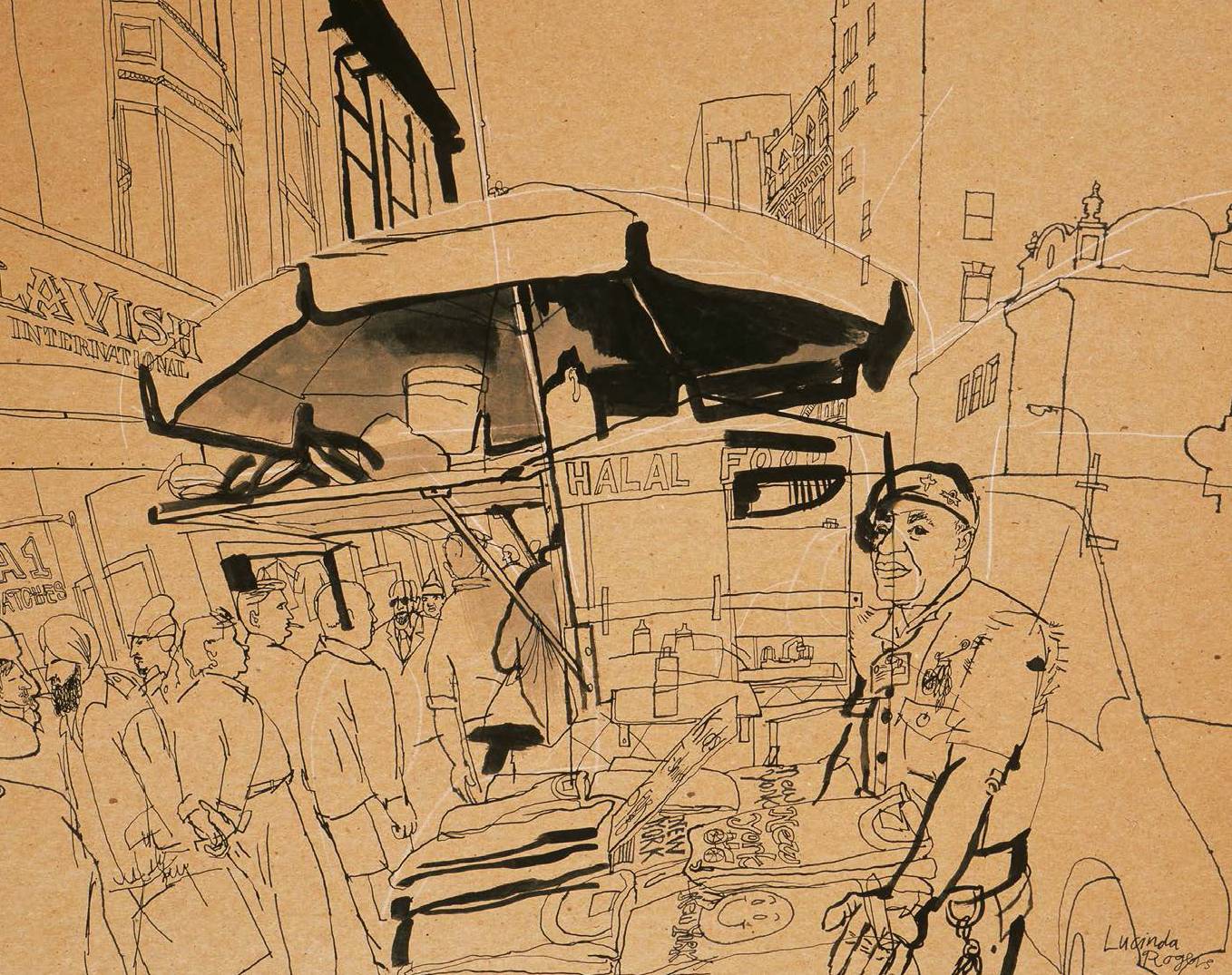 Backers were encouraged to pledge donations to cover the production costs of New York: Lucinda Rogers, with extra reward packages ranging from £10 for a pack of New York postcards through to £3,000 for a signed copy of the book with an original drawing. “The other beauty of this approach, while it is difficult in its own way, is the ability to decide on a design and the production values,” she says. House of Illustration curator Olivia Ahmad has edited the 132-page book, which will be printed in Italy on Fedrigoni paper and thread-bound in a gold-foil embossed cover.

New York: Lucinda Rogers will be split geographically into chapters that roughly follow the order in which she explored Manhattan, starting with her early days on the Upper West Side and progressing downtown. Though not entirely comprehensive – Central Park was avoided, she says, because “it’s really hard to draw trees” – she did use the prospect of the book to fill in a few blanks in her urban exploring, finally tackling forgotten subjects on recent trips such as Chinatown and The High Line, the latter a public park on a disused elevated railway that she calls “the most obvious physical change in New York recently”.

At time of writing, a total of £61,916 had been raised and orders for the book can still be made prior to printing in December. Lucinda is clearly buoyed by the response and the chance to compile these long-private drawings into a cohesive whole. “Even though I’ll probably continue to draw New York, it’s nice to say, well, this was this body of work,” she says. “It’s good to draw a line under something.”

Lucinda Rogers: New York is available to pre-order at lucindarogers.bigcartel.com

Shake up your practice this autumn with one of four sets of Caran d'Ache Luminance 6901 pencils courtesy of Jakar and Pegasus Art. The secret of light-loving colours, these smooth and permanent lead Ø 3.8mm pencils are perfect for artists and creative professionals. Created with the highest lightfastness in compliance with the International Standard ASTM D-6901, there are a wide range of assorted, intense and bright colours in the collection. Each of the vibrant colours has been developed with a large variety of highly concentrated pigments and manufactured with the best quality Californian Cedar wood.

Ergonomically designed, the pencil shaft is round, 8 plys and end-sealed in the same colour as the lead, making it easier than ever to select the perfect pigments for your artistic projects. Highly recommended for mixings and gradations, blendings and also shading and burnishing with a white pencil, these professional quality pencils will enable you to hone your practice and enhance your skills. ■