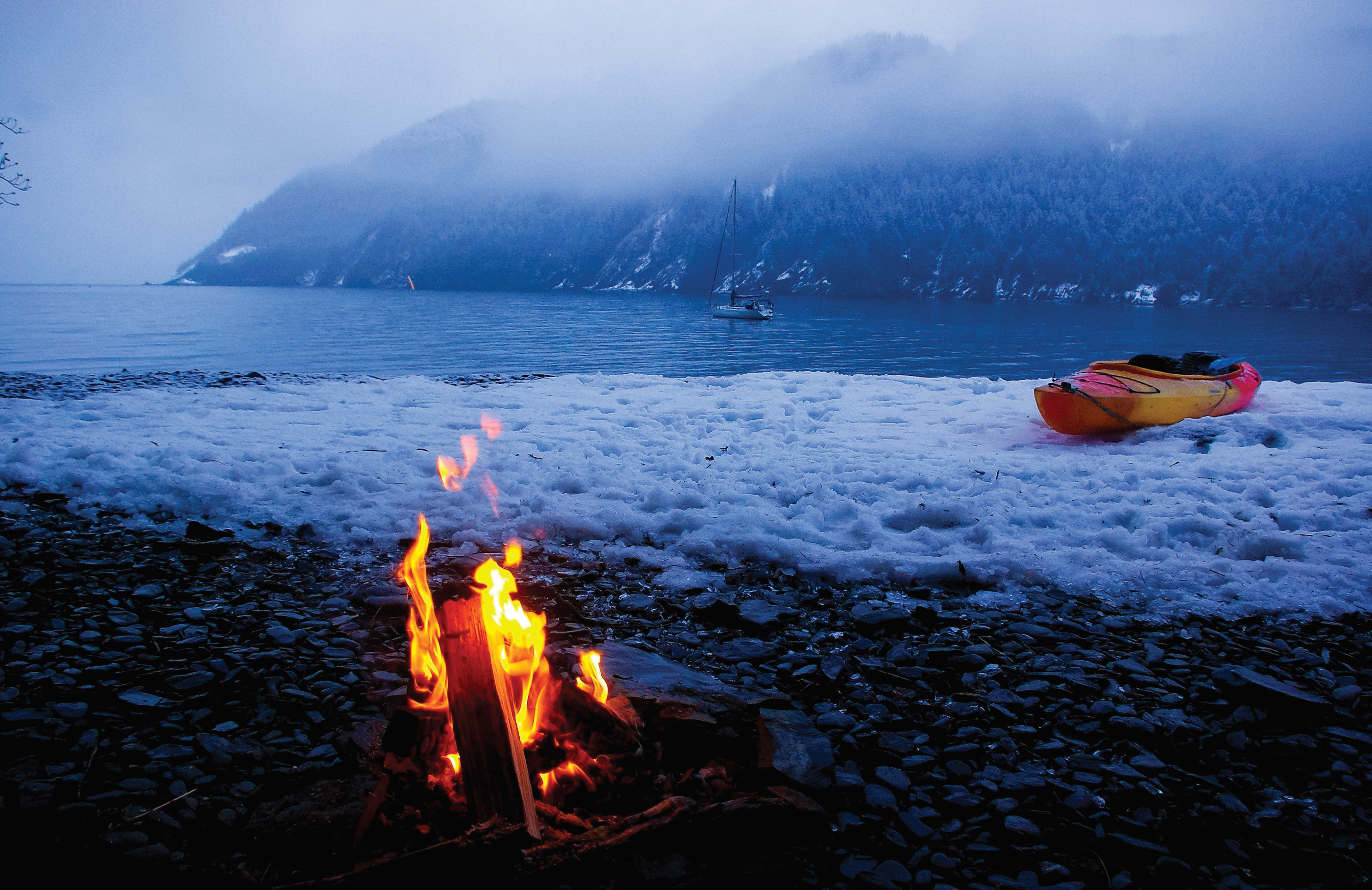 As I stood in the darkness of a seaside cave, I noticed water dripping from the ceiling while a fire crackled in front of me. I watched Yahtzee bob gently at anchor just off the beach, and snow fall silently to the ground and sea. The last vestiges of daylight were slowly fading with a remarkable bluish hue. At 60 degrees north, this winter twilight can last seemingly all day, as the sun sits behind low-lying clouds, never quite reaching a glorious noon crescendo. That is part of the magic of winter in Alaska.

While other boats sit on the hard or beneath shrink-wrap in the marina, it is important to us to get out and find these joys of cruising when the days get shorter. Because when the weather cooperates just enough to allow it, we are truly rewarded.

Besides our family, the only sign of human life we’d come across since leaving the harbor was a low-flying Coast Guard HC-130 that appeared through the fog, banked west over the mountains, and was gone in an instant. With so much wildlife around us, though, there was never a lonely feeling of isolation. Quite the opposite, actually. Porpoises surfed in our wake, sea lions swam by to check us out at anchor, eagles soared overhead, sea otters played off the beach, and we followed moose tracks in freshly fallen snow down the shoreline and into the dense forest.

When sunny days finally arrived, the air was crisp and still. The seascapes and mountain vistas lit up in brilliant colors, with snow glistening and shadows changing ever so slowly. From water to shore to mountain to sky, the scenery was so multilayered, it almost felt as though we were in many places at once. The trick was to slow down enough to take it all in.

At night, after the rain or snow tapered off and the clouds cleared, my wife, Jill, and I would sit in the cockpit clasping a hot toddy, staring skyward in wonder. The faint outlines of tall mountain peaks and ridges cut through bright constellations, making us seem like a mere droplet of water in the ocean. There we were, out in the familiar wilderness that we love, looking up from the deck of our home and sailboat, feeling rich with experience. And there was no place we’d rather have been. Yes, this was winter cruising at its finest. ■