PUTTIN’ ON THE RITZ 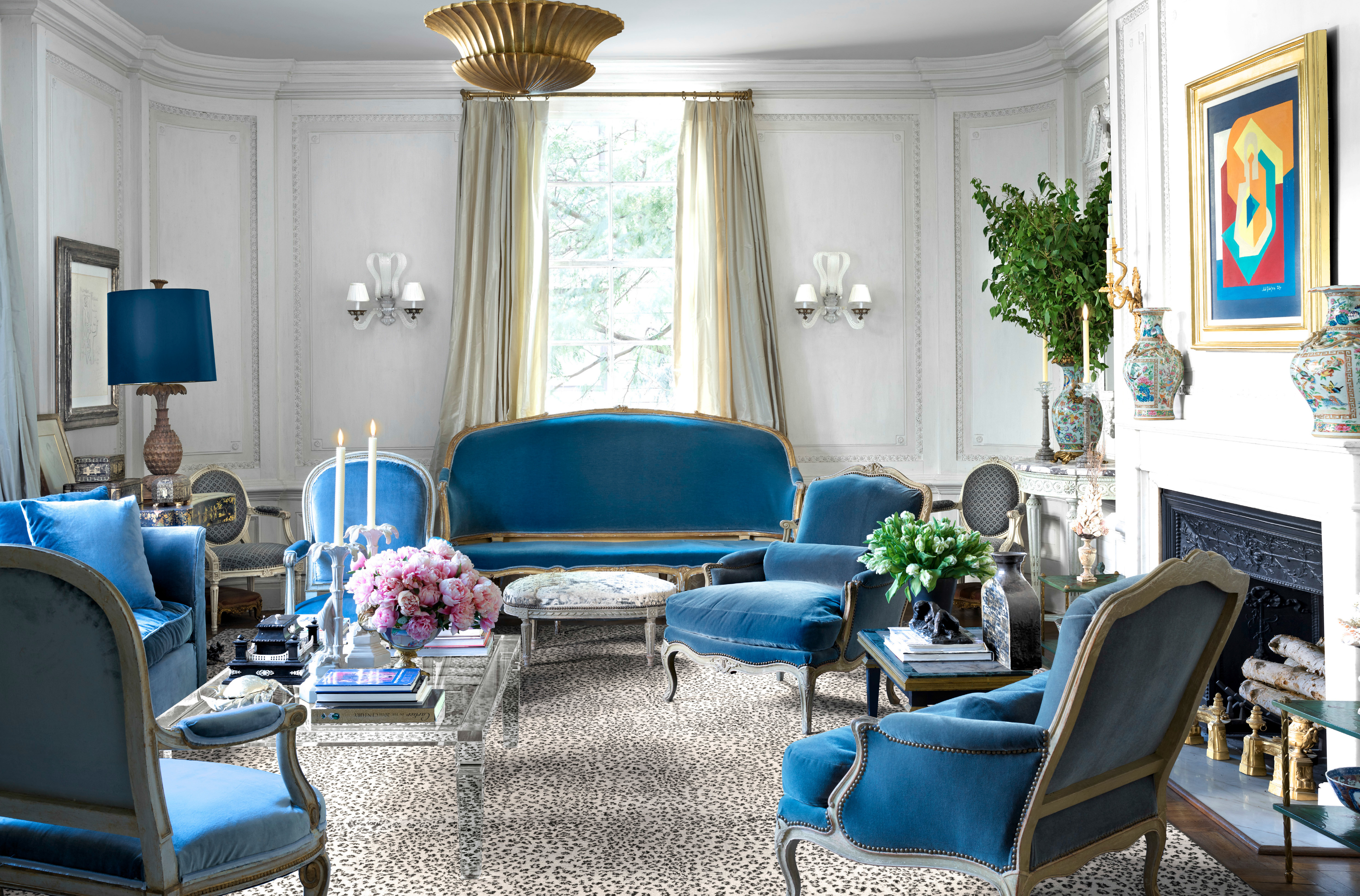 In the living room of Cynthia and Donald Frank’s apartment on New York’s Upper East Side, the Louis XVI settee is in a Clarence House mohair, and the armchairs (left) are in a Brunschwig & Fils silk velvet. An Albert Gleizes painting hangs over the original mantel, and the rug is by Stark.

A Charles Edwards lantern hangs in a hallway; the antique table is from James Maguire. 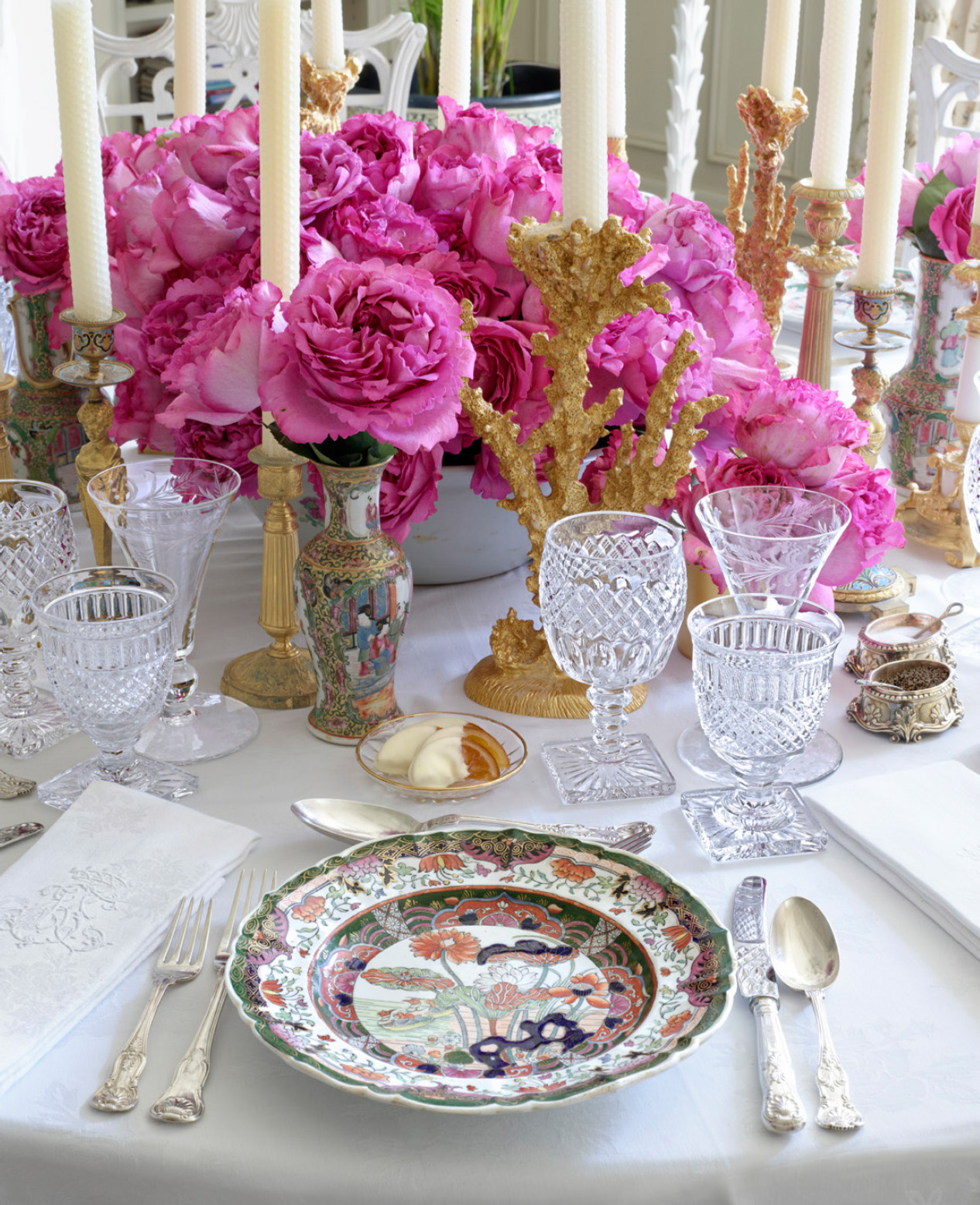 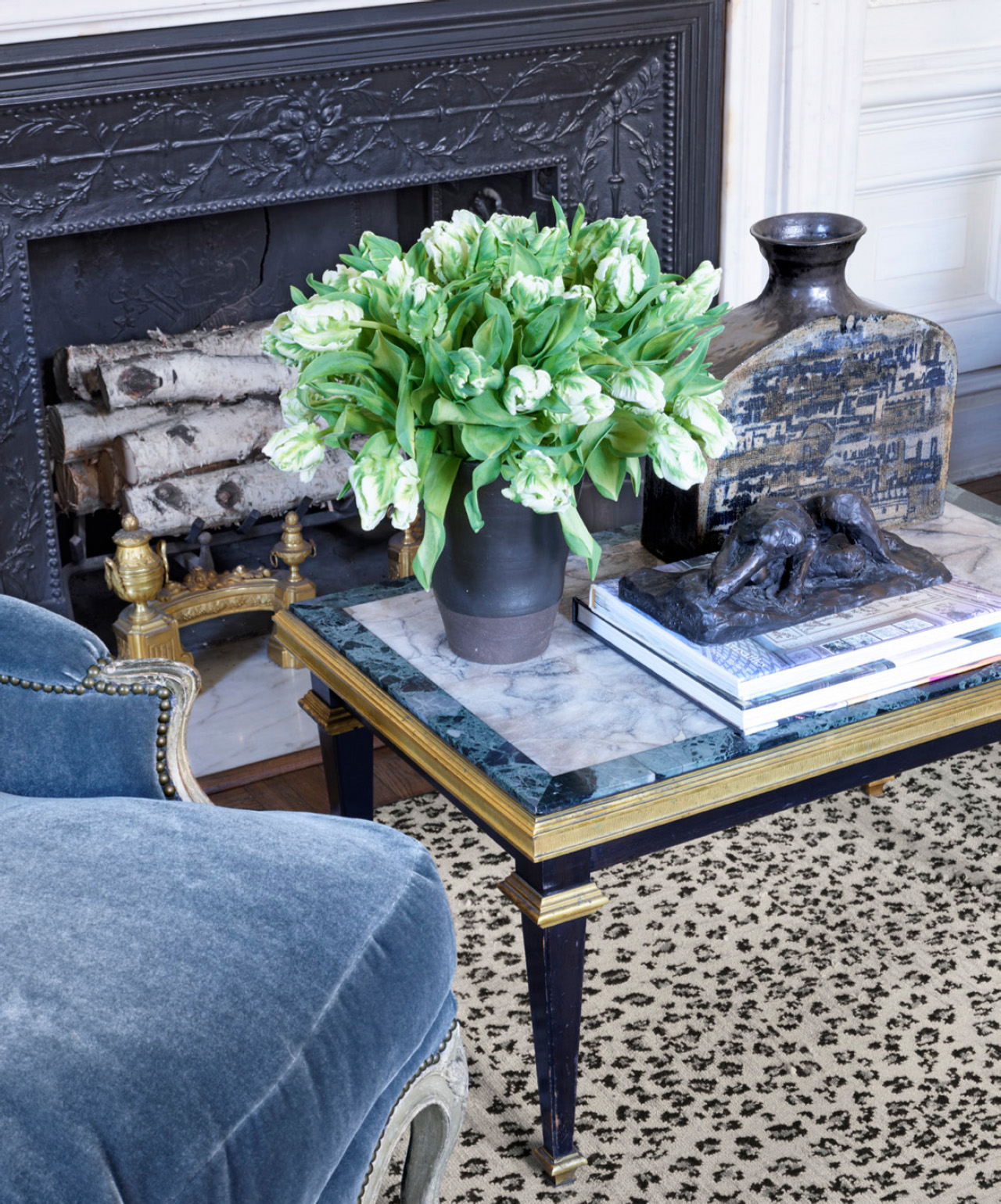 A 19th-century Japanese vase sits atop a Maison Jansen table from Frank Cechman.

YOU SEE A WOMAN SEATED IN A VELVET chair, blonde hair flowing, onyx-blue eyes assessing you, wearing Manolos made for walking from the mansion to the limo, and you draw conclusions. They are wrong. Cynthia Frank is not the empress of the 1 percent. She’s a worker. And at 77, she has no plans to stop working.

You don’t need to see her name on a home-decor spread to recognize her contribution: For half a century, she has celebrated fabulous residences and exquisite rooms in such magazines as Town & Country and ELLE DECOR. Which is not to say she is a stylist. Emphatically: “I do not arrange!” What she does do is hard to label, because her career is a sustained exception. When she got her first job, at Harper’s Bazaar, a friend’s advice—“If you tell them you can type, you’ll be a secretary”—produced a novel title: fabric and fur editor. “I got the job,” she explains, “because I looked the part.”

A few years later, when she was recovering from surgery in Palm Beach, Slim Aarons called. “Put down your orange juice, take your straw hat, and wear all white. I’ll pick you up in 20 minutes,” he said, and off they went to the opening of the Wellington Equestrian Center. Aarons snapped her photograph and sent it to Town & Country’s editor, who asked, “Would she rather have a cover…or go back to work?” Every turn for Cynthia Frank is a star turn. Dominique Browning, her editor at the late House & Garden, remembers her as “a big personality. She has zero tolerance for the mundane and a terrific eye for swellegance.” Years later, Frank styled a Georgia Tapert Howe project for ELLE DECOR’s March 2018 issue: “She didn’t think L.A. had good enough f lowers,” Howe says, “so she shipped 10 six-foot-long boxes from New York for the shoot—they just kept unloading them off the truck.” 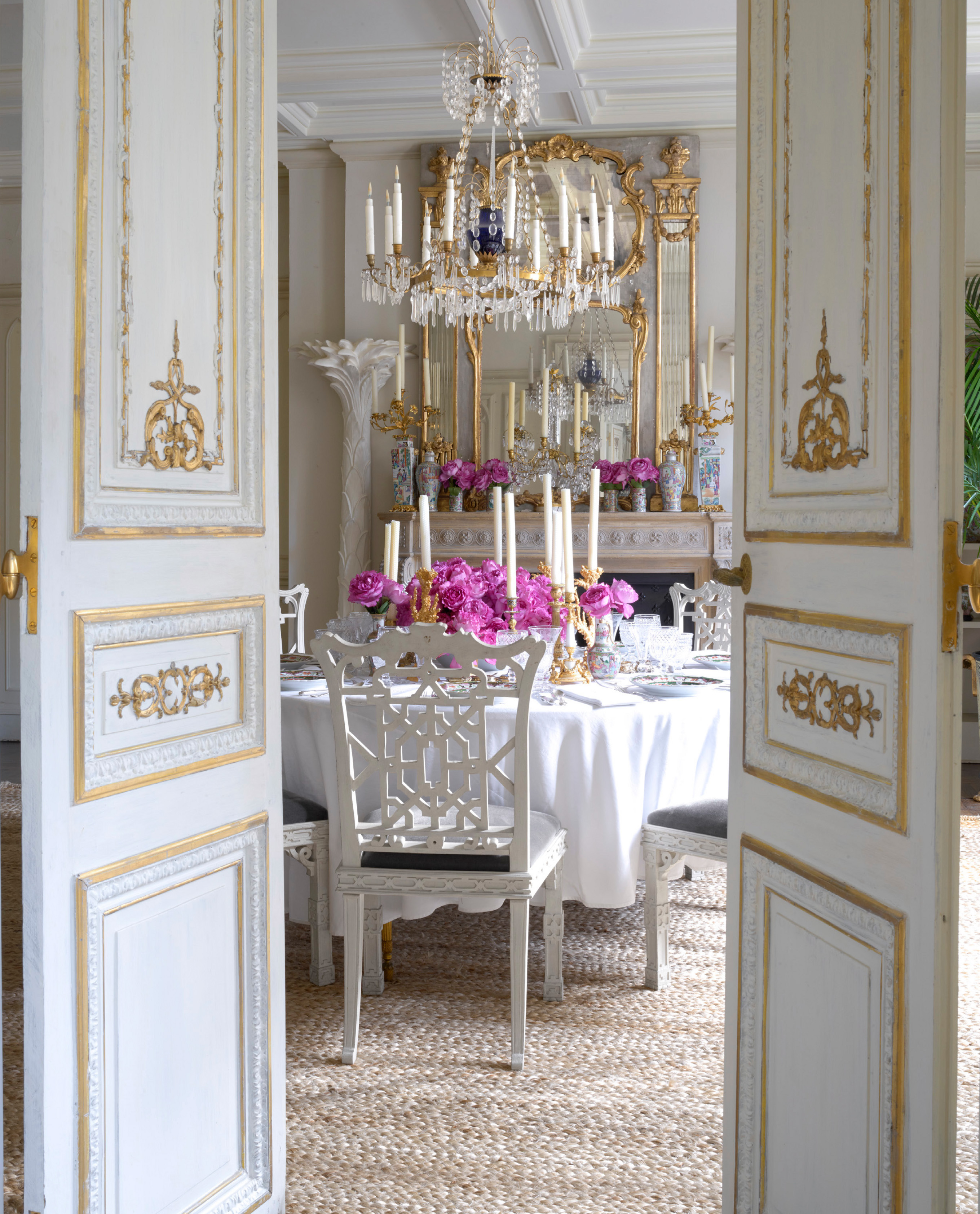 Antique French doors lead into the dining room, where the 19th-century Chippendale chairs are from Julia Boston and the antique French mirror is from George N.

In 1997, she made another idiosyncratic decision: When all three of their children were grown, she and Donald, her neurosurgeon husband, bought a 12-room co-op just off Madison Avenue. “We knew it was large for two,” she says. “It has rooms with no purpose.” 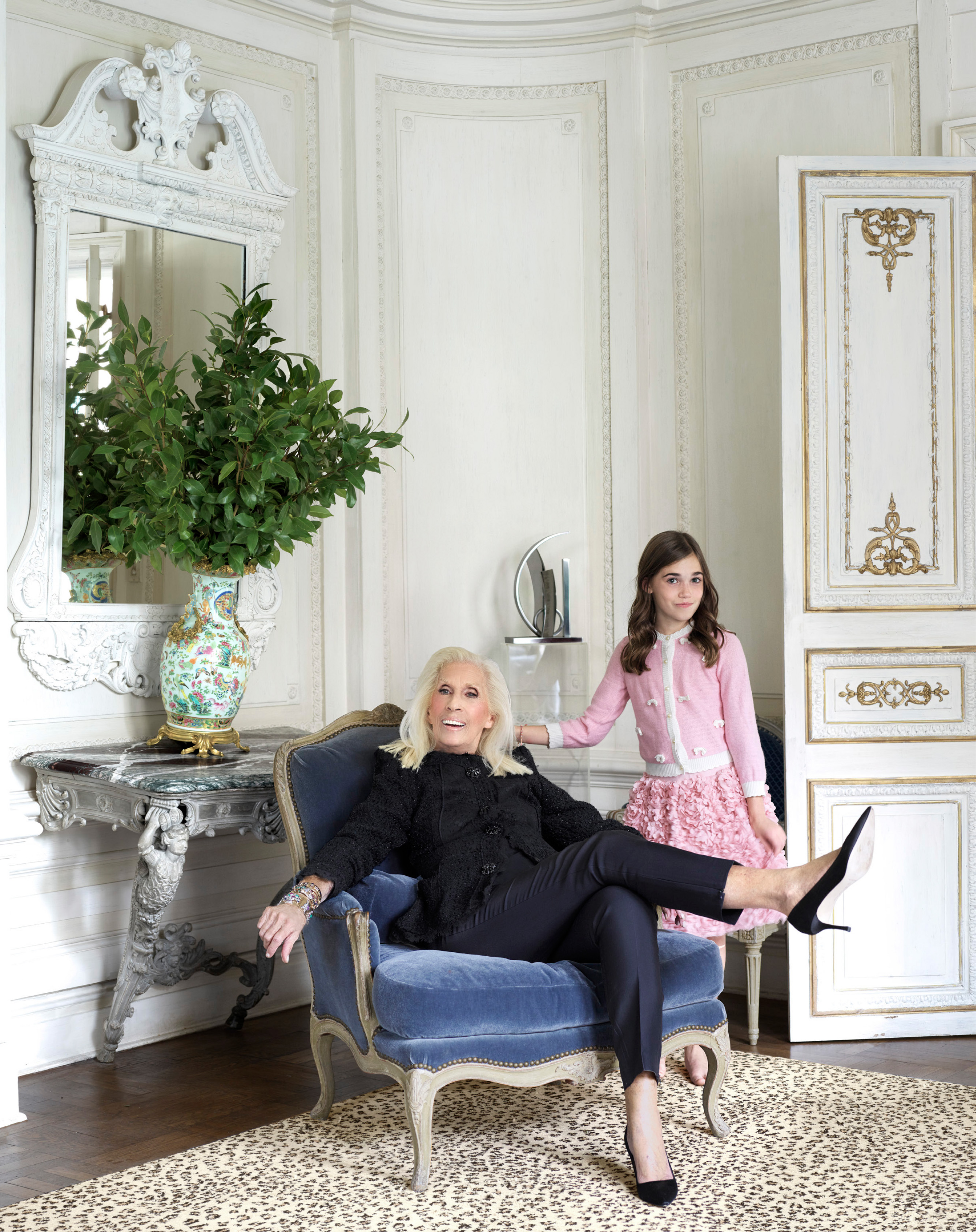 Cynthia Frank, in an Oscar de la Renta jacket and cuffs from her collection of vintage jewelry, with her granddaughter in the living room. The 18th-century console is from Sylvain Lévy-Alban, and the sculpture is by Alexander Liberman. 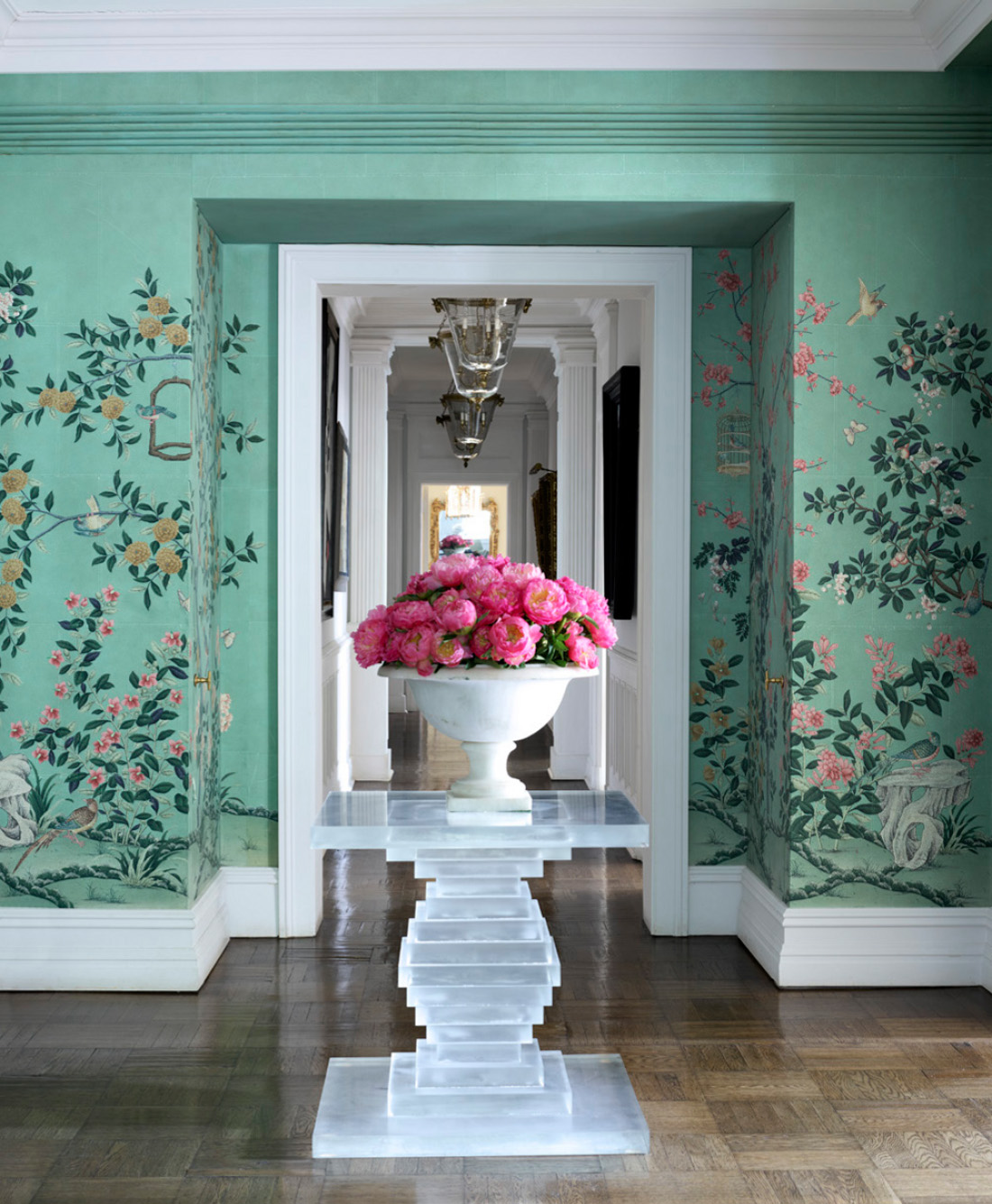 The entry’s 1960s Lucite table is from Venfield, the alabaster urn is filled with peonies, and the walls are covered in a Gracie wallcovering that was hand-painted on-site. 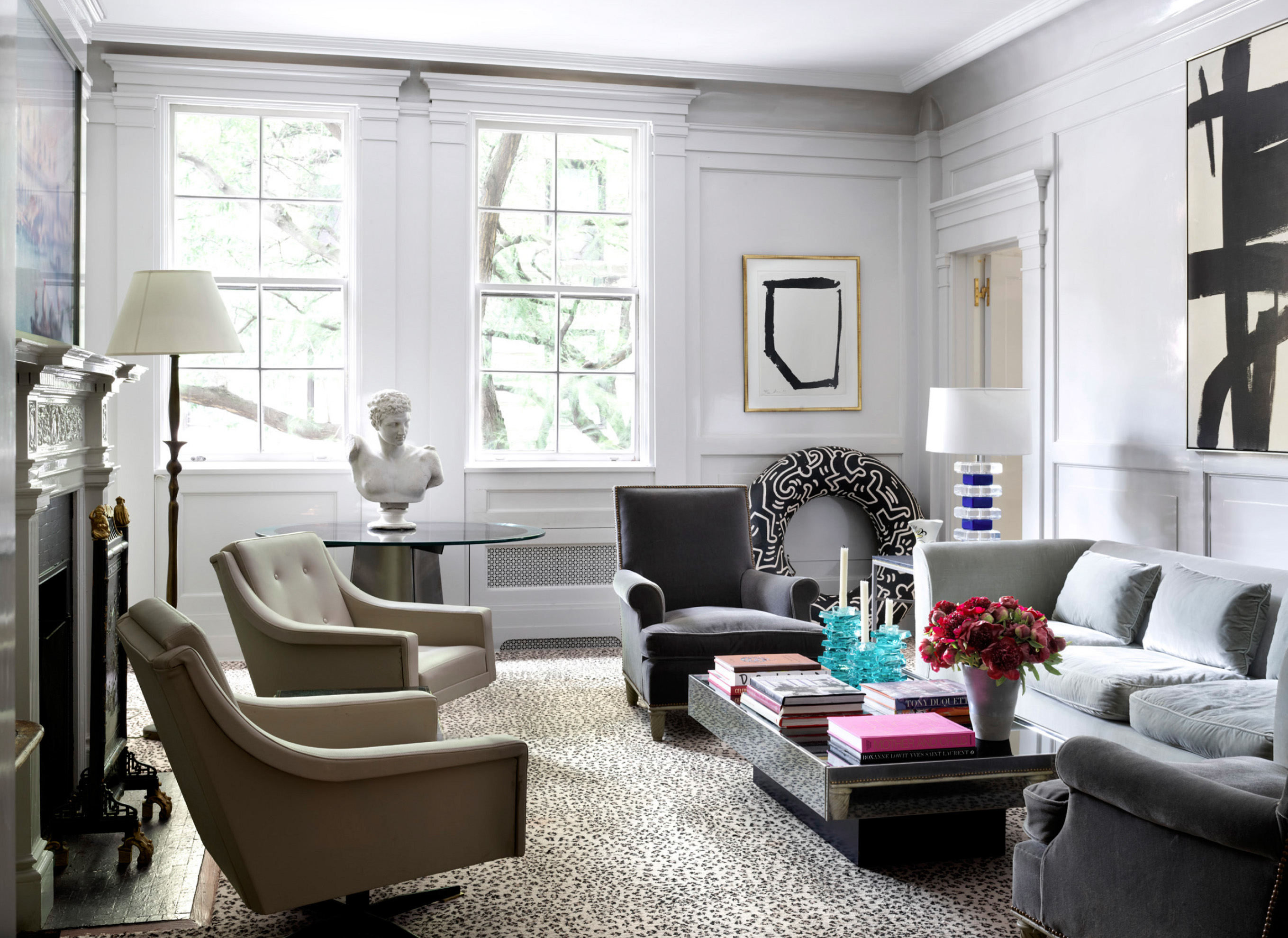 In the library, the sofa, purchased at auction, is attributed to David Hicks. The gray velvet Maison Jansen armchairs (right) are in a Clarence House mohair, the 1970s cocktail table is from Frank Cechman, and the carpet is by Stark.

She began the apartment’s transformation by adding moldings to the walls and deaccessioning most of her furniture. Then she went shopping, often at auctions, looking for the velvets and silks, leopard carpets, and crystal chandeliers that would be suitable.

Her aesthetics have been influenced by close friends such as architect Timothy Haynes and interior designer Kevin Roberts, but more often than not, her taste is guided by destiny; when objects speak to her, she buys them. In the living room, a David Hicks sofa, 18th-century chairs, and a vintage Maison Jansen table coexist amiably. Harmony extends to the walls; the blue in the Albert Gleizes painting that hangs over the living room fireplace echoes the velvet of the chairs. Other touches are subtler. A Venetian mirror in a hallway is banded in velvet, a trick she picked up from the Rothschilds. 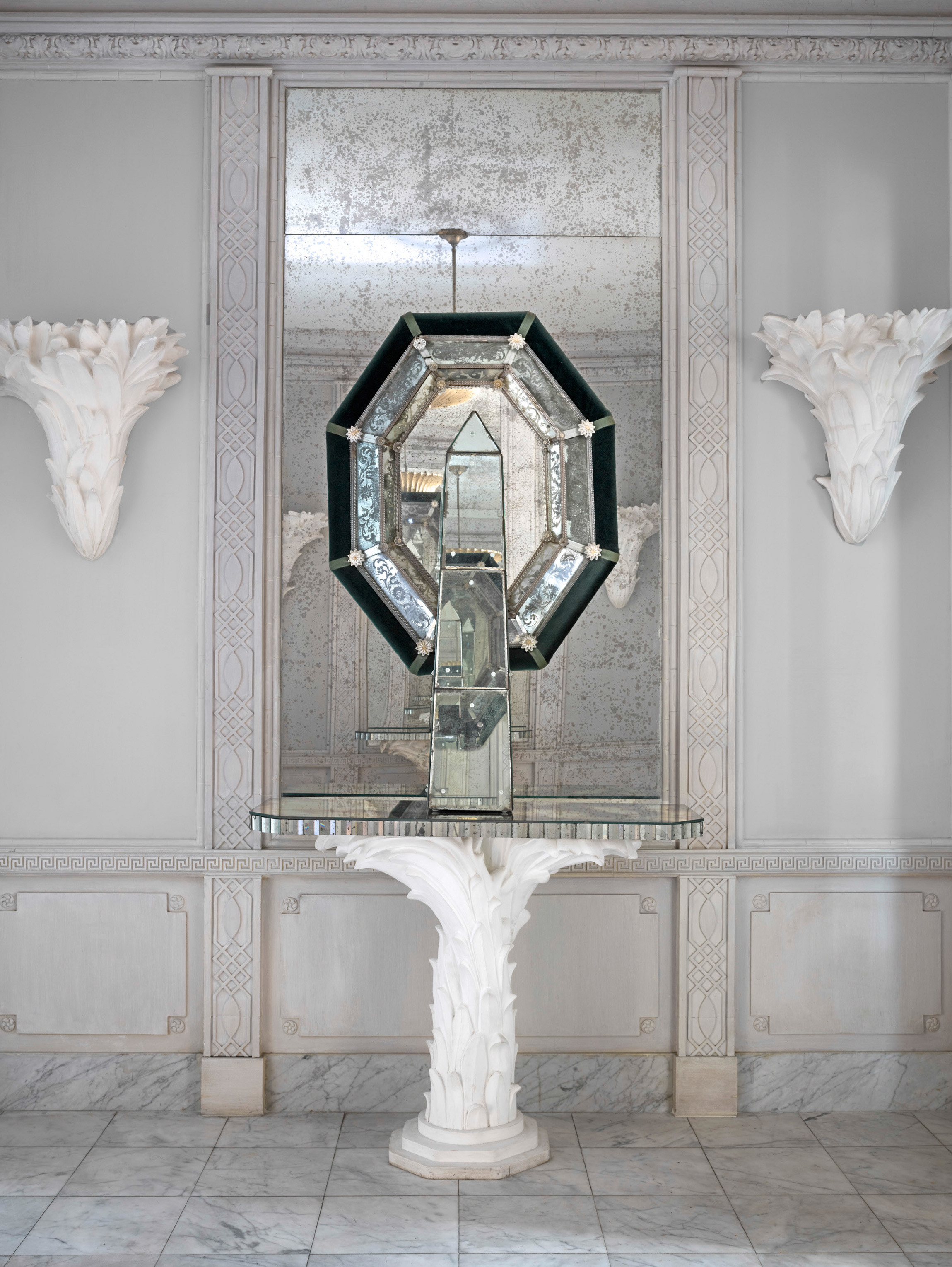 A vintage Serge Roche table in the entry; the mirrored obelisk from Gallery 25 is antique. The mirror is Venetian, and the marble flooring is original. 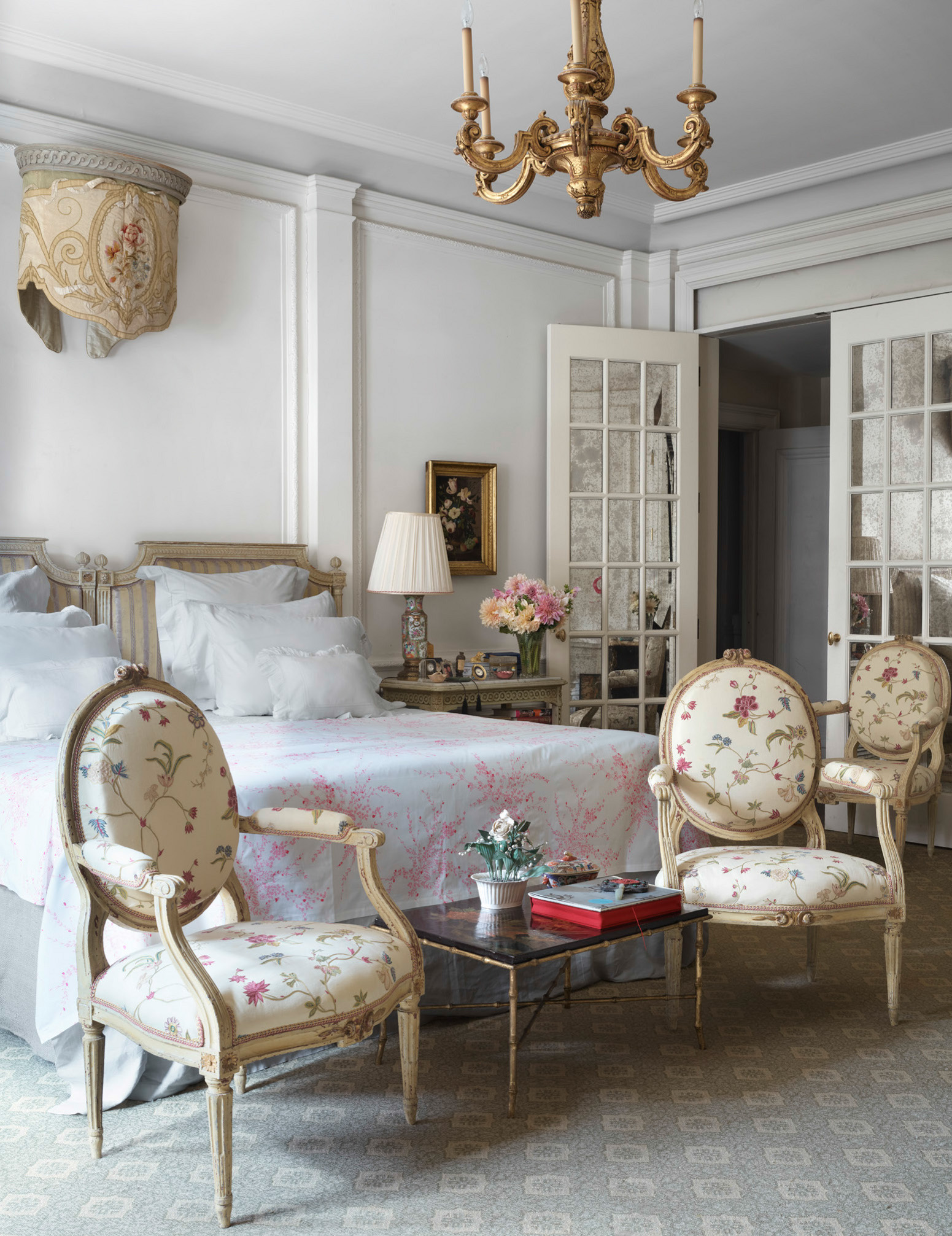 In the master bedroom, a pair of 19th-century daybeds are topped with a king-size mattress and a D. Porthault coverlet; the Louis XVI chairs are in a Chelsea Textiles fabric, and the chandelier is by Charles Edwards.

Her most recent purchase? Oh, that was yesterday, done and dusted; she shops every day. And yet, in her living room, I feel no frenzied shopaholic energy, just over-the-top comfort. Does she? “Yes. When I sit here, I feel I’m in Paris.” Which isn’t to say the apartment is finished. “It will never be done,” she says. “Every time I come back from a shoot, I’m inspired to do something.” 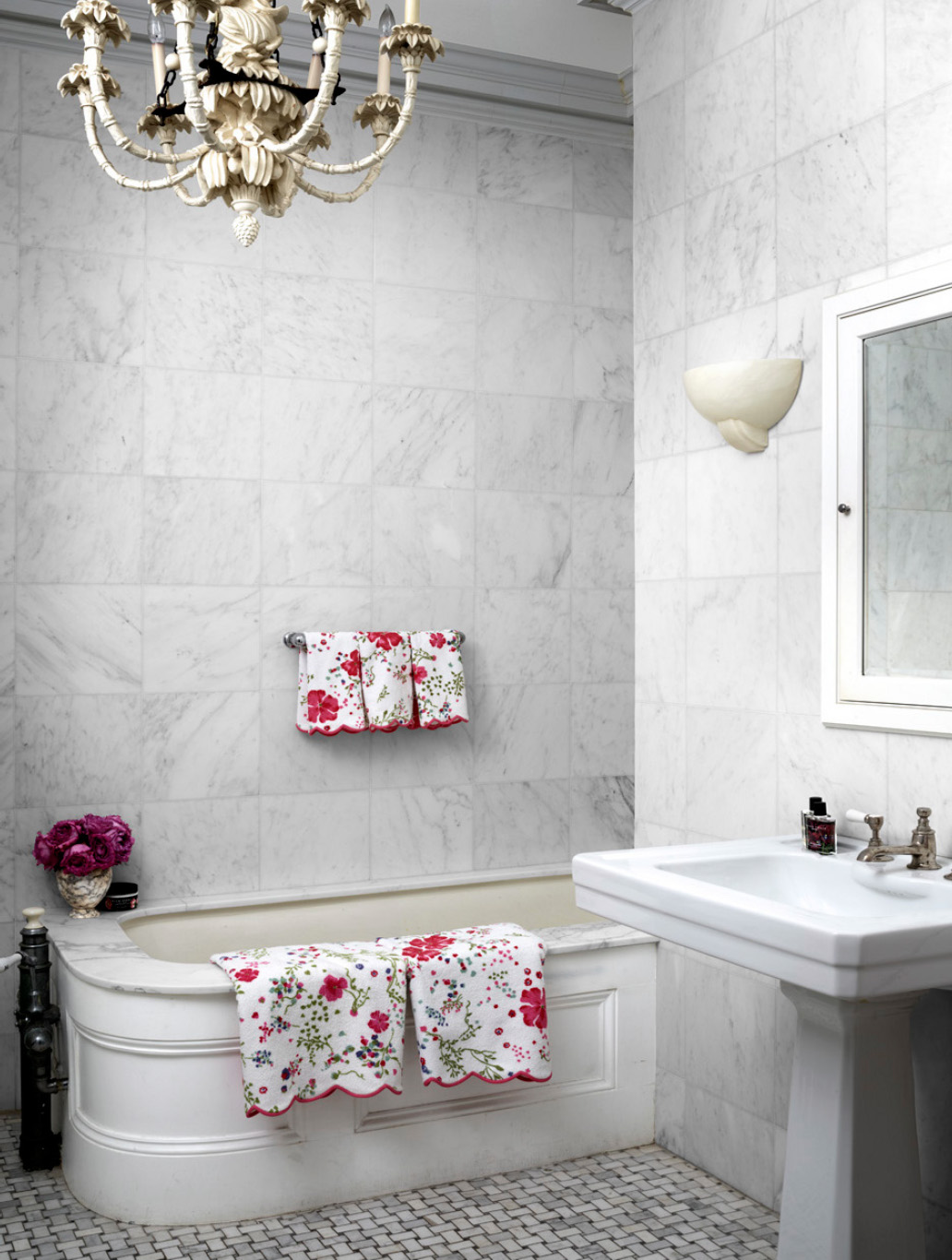 In a guest bath, the medicine cabinet, sink, and fittings are by Waterworks; the floor and wall tiles are from Studium. 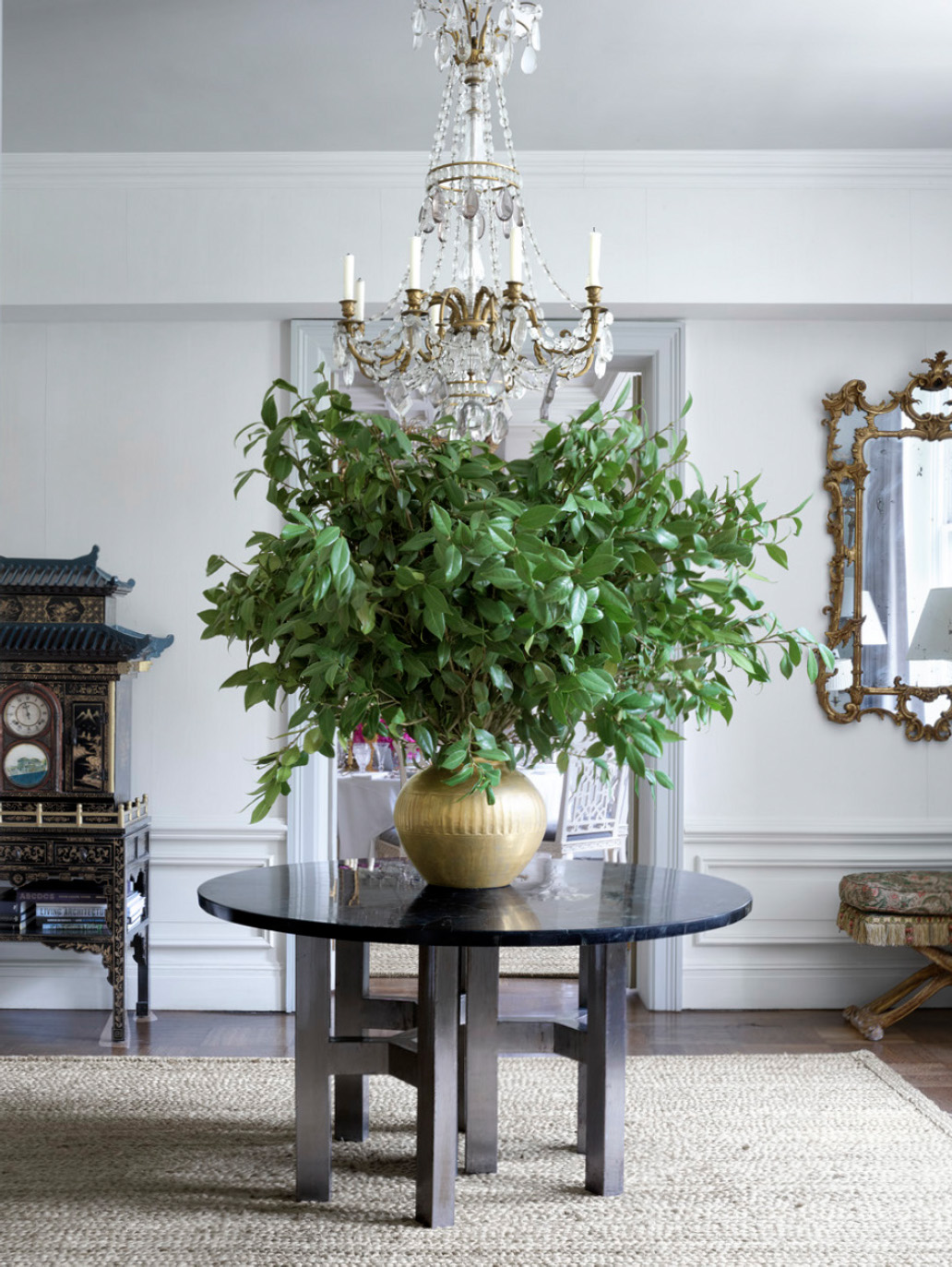 The entresol has a 1970s Ado Chale table, a gilt vase from Russ Steele, and an 18th-century mirror. For details, see Resources.
■