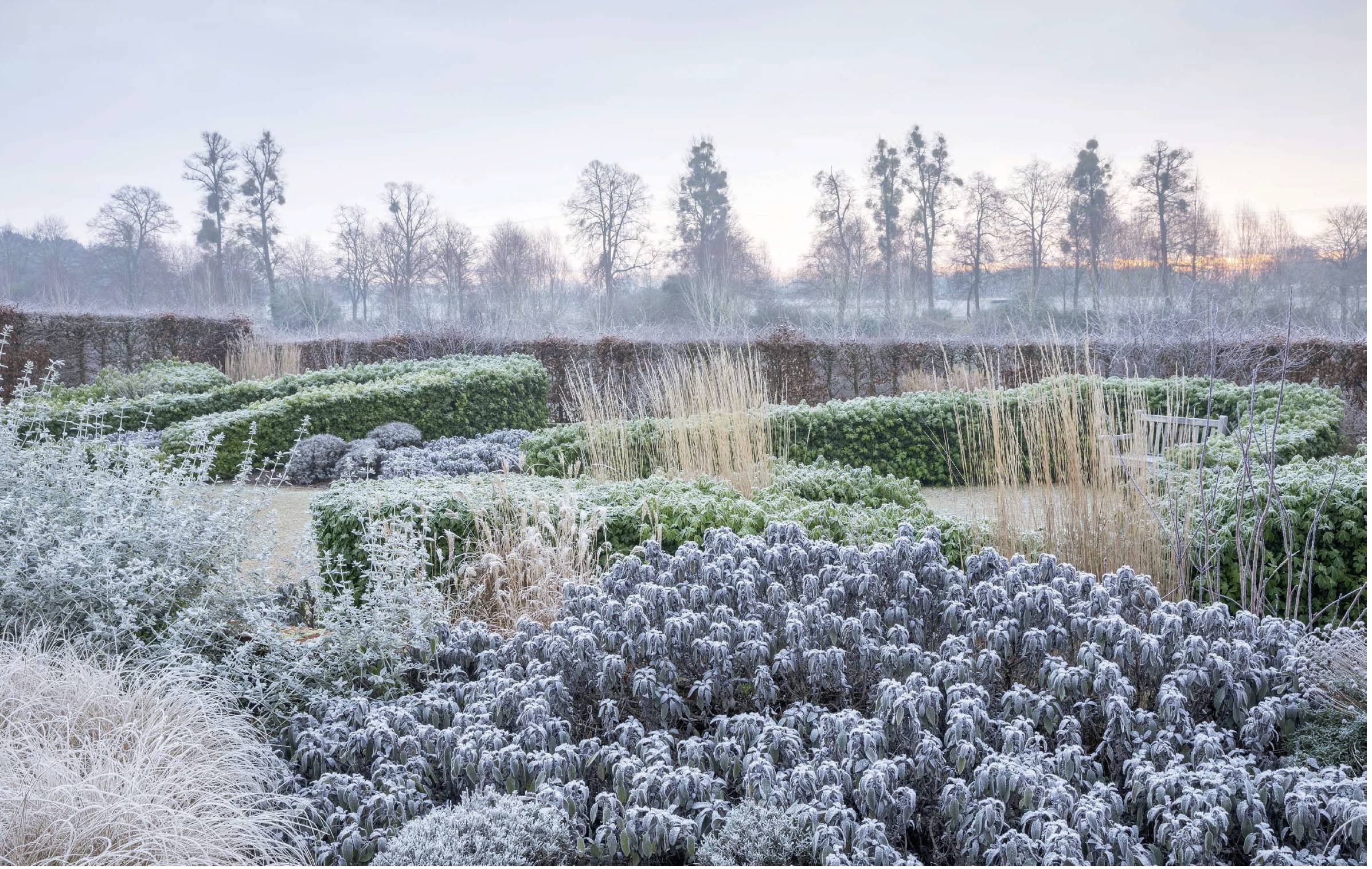 The walled garden, designed by Brita von Schoenaich, has matured over the past 15 years, with wavy hedges of close-clipped Choisya ternata, clumps of upright Calamagrostis, arching Miscanthus, and frost-covered Salvia officinalis and Teucrium fruticans.

The Essex estate of Marks Hall has been shaped by remarkably few families since the name of Mercheshalle was registered in the Domesday book nearly one thousand years ago. The Merkshalls moved in shortly after the Norman Conquest and stayed until 1562 and the Honywoods were in charge from 1605 until 1897. The estate was then acquired by a former Liberal MP Thomas Phillips Price after an inheritance dispute triggered an auction. Phillips Price was enthralled by the fine collection of rare and venerable trees on his land. Keen to preserve this rich botanical heritage, he determined to bequeath Marks Hall to the nation, and would surely be delighted to see that today the estate is enjoyed by thousands of visitors who come to explore its magnificent arboretum, contemporary walled garden and miles of woodland walks. But the picture hasn’t always been so rosy. Phillips Price died in 1932, leaving his wife a lifetime interest in the property, but she survived him by over 30 years, during which time the estate fell into disrepair. Much of the land was leased to the Forestry Commission, which covered it in commercial pine plantations, and when a charitable trust was finally established to run the estate in 1971 it was a relic of its former self. The trustees’ first act was to buy back the lease from the Forestry Commission and draft a plan to create an arboretum of botanical significance. Then it was just a question of waiting for the pines to mature. As each plantation was felled, the land was cleared and brought back into the management of the Marks Hall Trust. 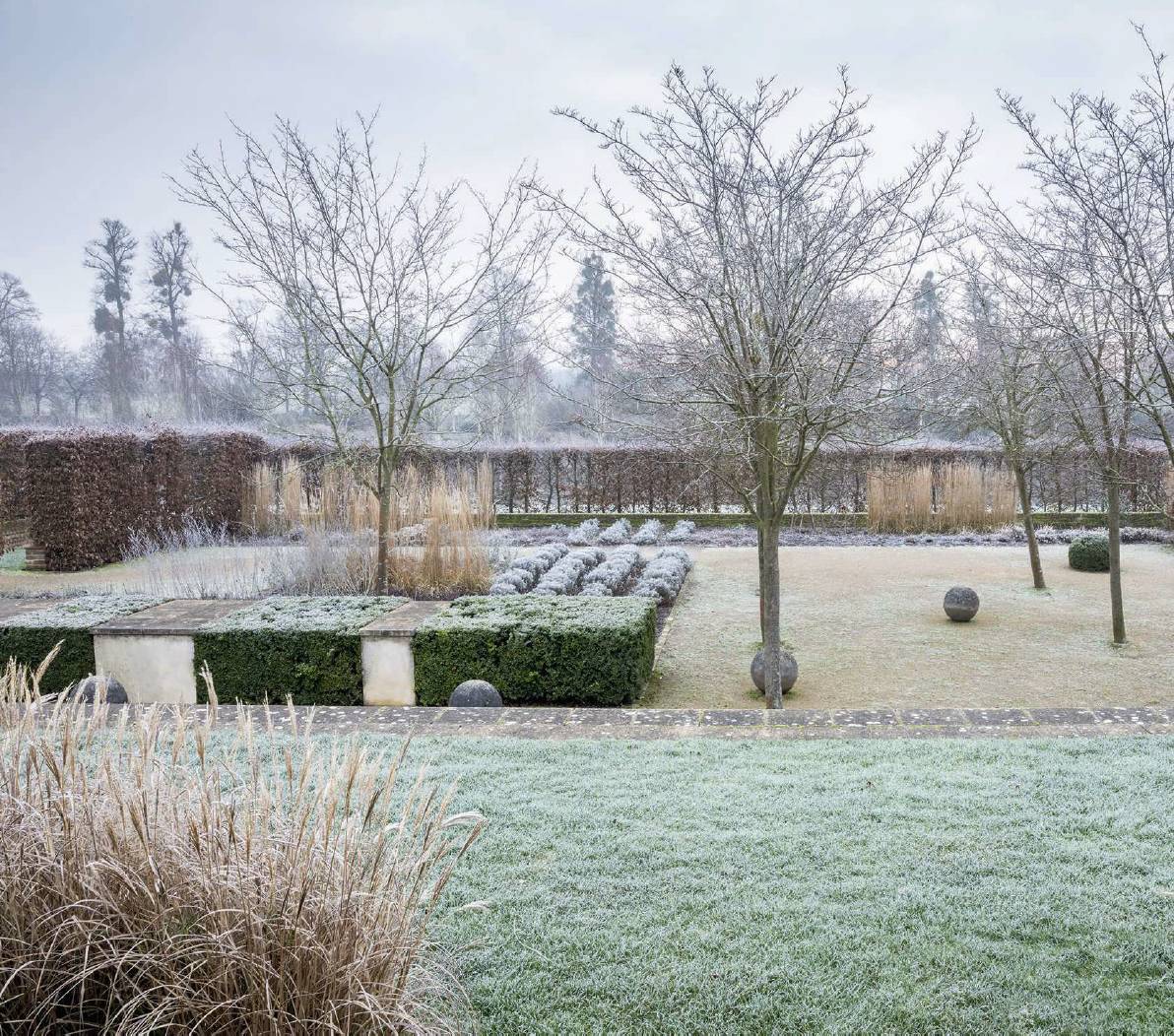 Five, interlinked gardens are connected by land-form shapes and sinuous hedges and walls

Ian Chandler, who is now the arboretum manager, came to Marks Hall in 1998, just as the pace of change was starting to accelerate. The arboretum had been organised into geographic zones, with a programme of planting on a generous scale that today forms an impressive display. Visitors first walk through a grove of willows into an area representing Europe, which is designed to blend with the surrounding countryside. From there a broad gravel path leads into Asia, North America and the southern hemisphere.

Marks Hall has many trees of international importance. These include a Parrotia persica grown from wild-collected seed, and therefore genetically valuable, which Ian has managed to propagate on the estate, and an Abies numidica that is on a critically endangered list in southeast Algeria where it grows in the wild. He also intends to try Meliosma veitchiorum – grown from a root cutting from renowned plant hunter EH Wilson’s original wild collection in western China at the end of the 19th century – although seed from its long purple pods can take up to two years to germinate. “One thing we are not short of is space,” says Ian. Ten more acres of former forestry land are currently being cleared by a team of volunteers and Ian is dreaming of a new ginkgo forest. “We are always planning for the future.”

In 1998, Brita von Schoenaich was commissioned to create a contemporary design for a three-acre, lakeside garden to complement and contrast with the wider estate. Her design of five interlinked gardens, connected by land-form shapes and sinuous hedges and walls, caused quite a stir when it was unveiled in 2003. Planted with bold 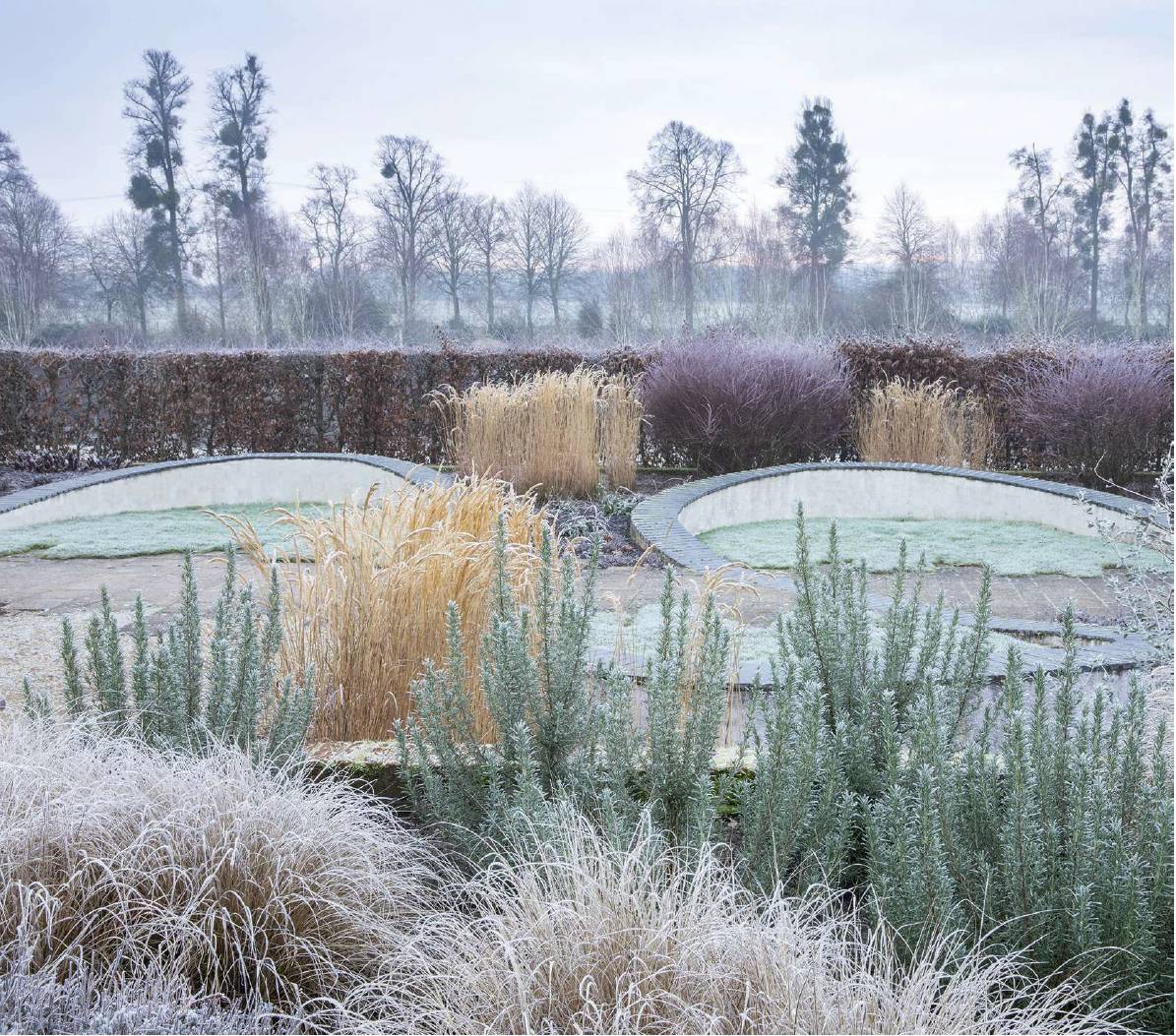 This image An undulating wall is cut into the sloping ground to increase its impact. 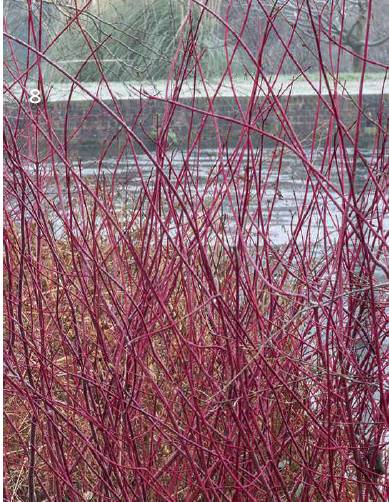 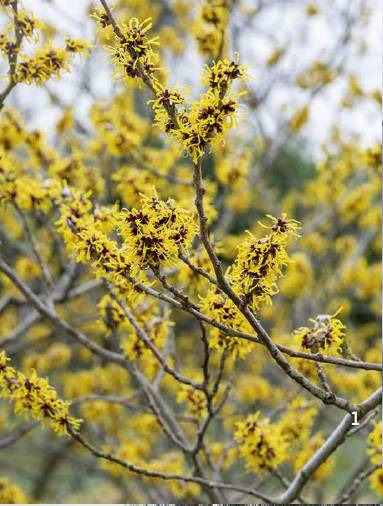 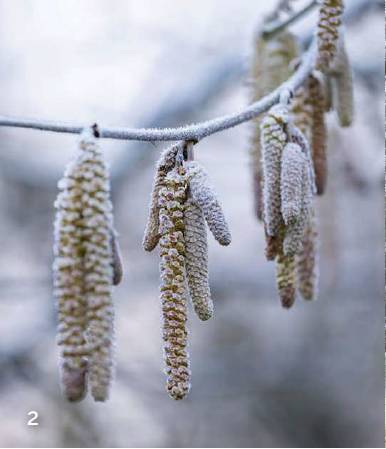 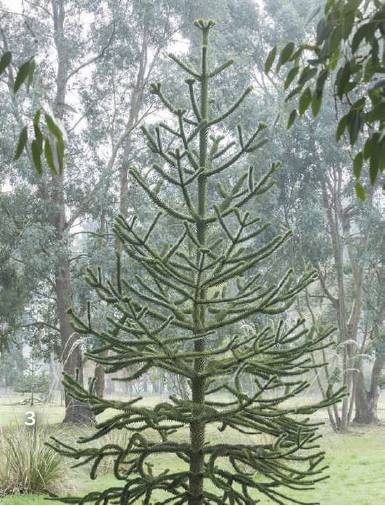 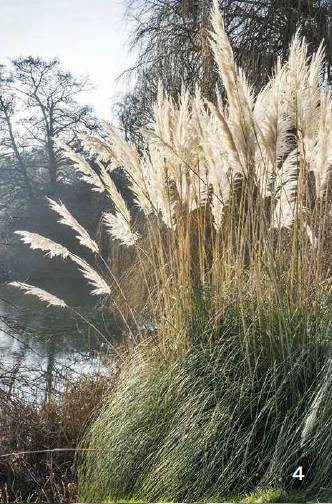 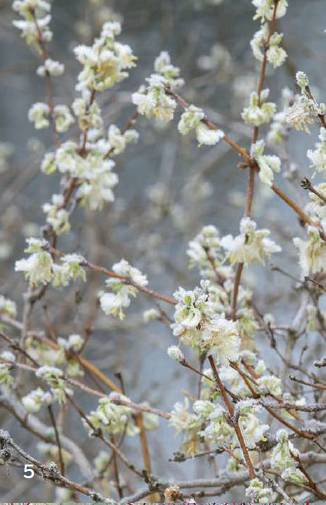 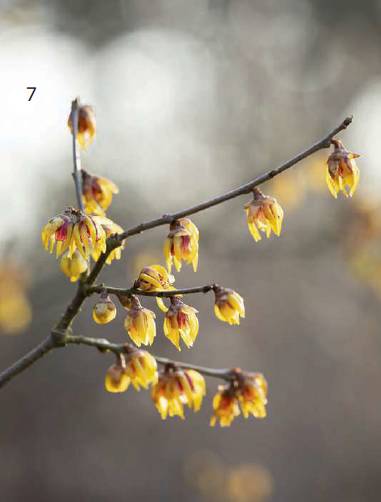 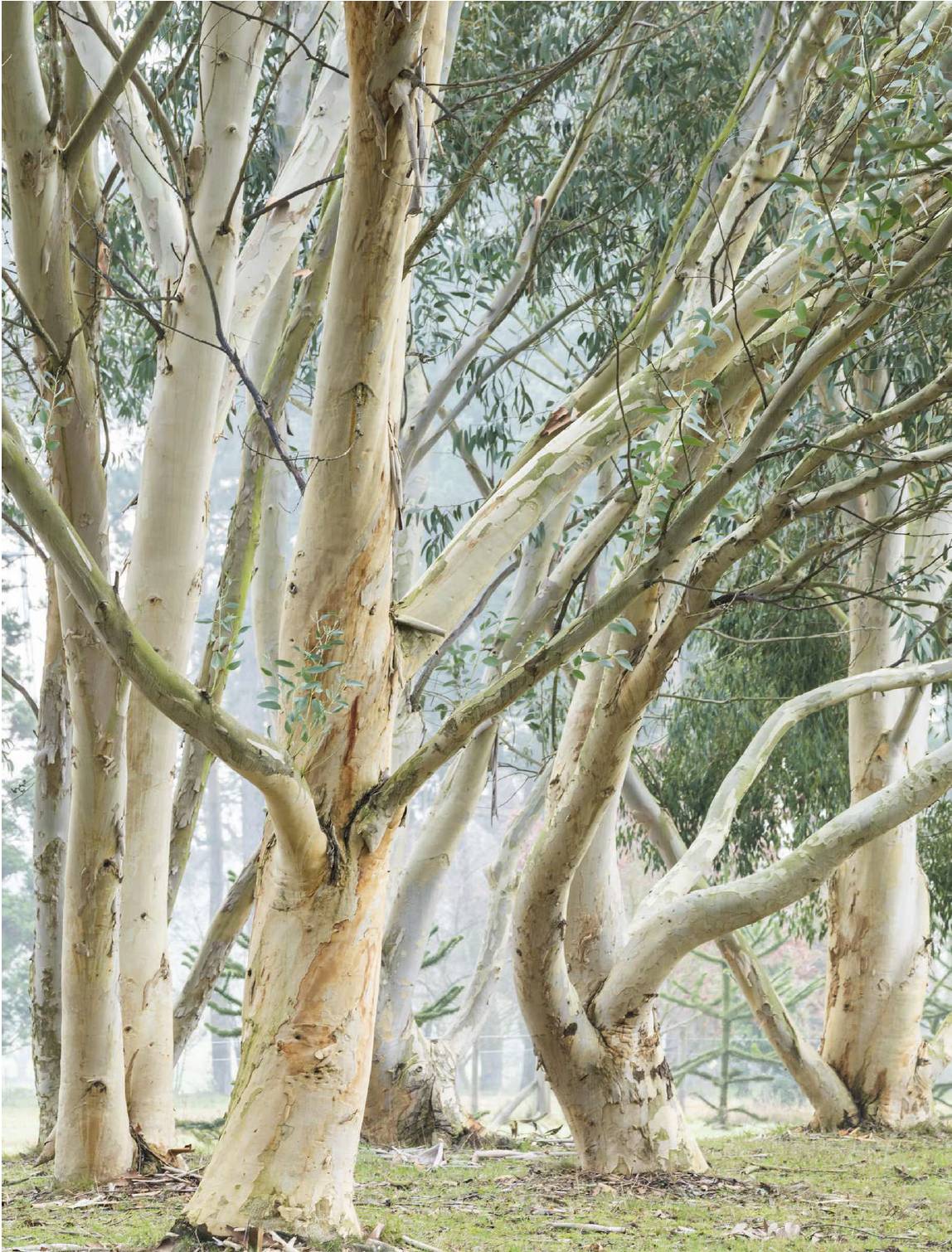 The young Eucalyptus pauciflora subsp. debeuzevillei planted out from three-litre pots less than 20 years ago have matured into towering trees, conjuring a surreal scene that feels far removed from the surrounding Essex countryside.

1 Hamamelis mollis The Chinese witch hazel, is a large, broadly trouble-free shrub bearing fragrant, spidery blooms on its bare branches in late winter. 2.5-4m. RHS H5, USDA 5a-8b† . 2 Corylus avellana Our native hazel or cobnut, is covered in catkins from mid-February. It is wind-pollinated and releases clouds of yellow pollen when its branches are shaken. 4-6m. RHS H6, USDA 4a-8b. 3 Araucaria araucana The monkey puzzle tree is a South American native that first appeared in this country in the Victorian era. Makes a fine ornamental specimen, given the space to reach its full height. 15-30m. RHS H7, USDA 7a-10b. 4 Cortaderia selloana The standard pampas grass, is a vigorous, clump-forming perennial grass that needs plenty of space, since it can reach 3m high and 2m across. RHS H6, USDA 8a-10b. 5 Lonicera fragrantissima Winter-flowering honeysuckle, is a fine shrub that bears fragrant flowers on almost leafless branches to the delight of winter-active bumblebees. 2m. RHS H6, USDA 4a-8b. 6 Daphne bholua ‘Jacqueline Postill’ Sometimes known as the Nepalese paper plant, this daphne has leathery, deep-green leaves and from late winter to spring produces masses of deliciously perfumed pink and white flowers. 4m. AGM*. RHS H4. 7 Chimonanthus praecox Wintersweet is a fast-growing shrub with bare branches covered in fragrant yellow flowers throughout winter. 2.5m (4m if trained against a wall). RHS H5, USDA 7a-9b. 8 Cornus alba ‘Sibirica’ A medium-sized dogwood that produces a thicket of vivid red winter stems if coppiced to within 5cm of the ground in spring. 2m. AGM. RHS H7, USDA 3a-7b. blocks of ornamental grasses, long-flowering perennials and a symbolic ‘pool’ lined with slivers of slate set end on end, it soon became one of the best-loved parts of the estate. In fact, it is now known as the Honeypot for its capacity to lure visitors in, although at this time of year its gates are firmly shut for the winter.

Right now, the stand-out feature is two acres of former scrub designed to peak during the quieter months of winter. It lies within the Asian section and, 19 years after planting, its semi-mature stands of Betula utilis var. jacquemontii and Cornus alba ‘Sibirica’ create a magnificent effect on a frosty morning, when the white trunks and blazing red stems are reflected in the still waters of the bordering lake. The air here is filled with sweet and spicy scents from a glorious range of winter-flowering shrubs, most notably witch hazels, wintersweet and Sarcococca hookeriana. It is an expression of Marks Hall’s aims – to celebrate trees, to promote excellence in horticulture, and to offer a magical space that can be enjoyed at any time of year.

The stand-out area at this time of year is the Asian section, where the air is filled with sweet and spicy scents from a glorious range of winter-flowering shrubs

What Arboretum and walled garden.

Size The garden comprises three acres of the 2,200-acre estate.

*Holds an Award of Garden Merit from the Royal Horticultural Society.† Hardiness ratings given where available. ■