Any will do, from the original to the 4K.

THIS WILL COME as no surprise: Amazon’s hardware line, ostensibly running its own OS, borrows heavily from Android. As in, it’s basically a reskinned Android, with the Google apps trashed in favor of ones that support Amazon’s ecosystem. This is true of the company’s Fire tablets, it was true of its disastrous phone, and it’s also true of the Fire TV range—it’s all Android underneath. This means it has, at least to some extent, the same extendable structure as Android. We can take a Fire TV Stick or TV Cube beyond its standard lineup of channels and apps—we’re not stuck with what Amazon offers on its tightly controlled store. Things like Plex are already available there in a couple of clicks, but if you’re running a Kodi server at home, or if you have a passing interest in the (sometimes questionably legal) successor to XBMC, you’ll know how useful having access to the Kodi app is, particularly given the TV Stick’s convenient remote. This isn’t only a way to run Kodi—it gets you access to a whole host of unsigned apps—but that’s what we’ll focus on here. Feel free to do your own experimentation.

Start by getting your Fire TV Stick prepared. It’s remarkably simple, and there’s no need to do any real hardware hacking or rooting—like many Android phones, the required options are in there already. Plug your TV Stick into your TV as normal, and get your remote ready, as you need it to work through these steps. Truth be told, there’s not really a lot you need to do with your PC at this point—the entire install process can be done on-device, on-couch, in about five minutes if you follow along quickly.

Using the remote, head to “Settings” in the bar at the top of the main screen, then scroll across to “My Fire TV” [Image A]. There’s a lot here, including the factory reset option (which may come in handy later if something goes wrong), but ignore it for now, and head to “Developer Options.” Thankfully, there’s none of the standard Android septuple-tapping shenanigans required to gain access here—Amazon has left things rather open. Just enable “Apps from unknown sources,” and you’ve told your Fire TV Stick that you’re cool with it running whatever. There’s an obvious security risk here, particularly if you tinker your way into installing an app you don’t trust, so we urge you to be a little careful with this new-found power. Accept the dire warning [Image B] and you can continue.

How do you install an unsigned app on a Fire TV Stick? In one of two ways: Either use ADB over a network (see “Easy as ADB,” opposite) or download the APK file to your stick and run it from there. The non-stick version of the Fire TV, with its USB port, offers another obvious route to installation, but we’ll work with the TV Stick for now. Head to Amazon’s search bar and find the app Downloader; ensure it’s the one published by Troypoint.com. You can also do this on your PC, picking up the app from the Amazon store, and sending it to your device, but you might as well sit and use the remote.

Run Downloader, accept its permissions (if you don’t, you won’t be able to download anything), then laboriously use Amazon’s infuriating alphabetical-order keyboard (seriously, why?) to type in the address of the site that hosts your desired file using the box on Downloader’s “Home” screen [Image C]. In this case, we’ll opt for the official Kodi download page at http://kodi.tv/download. This opens the page in Downloader’s built-in web browser. Use your remote to control the red circle and scroll through until you find the “Android” section, then select it.

We’ve found the 32-bit ARM version, from the more stable “Release” branch, works best. You’re welcome to try any of the others—Google Play and X86 won’t work, as you’re not on a Google device and you’re not using an X86 chip—but the nightlies, if you’re offered any, may include new experimental features to go along with the inherent instability of using bleeding-edge software. Pick your poison, download it [Image D], and you’re given the option to install. Go ahead and do it, then select the option to remove the file you’ve downloaded. 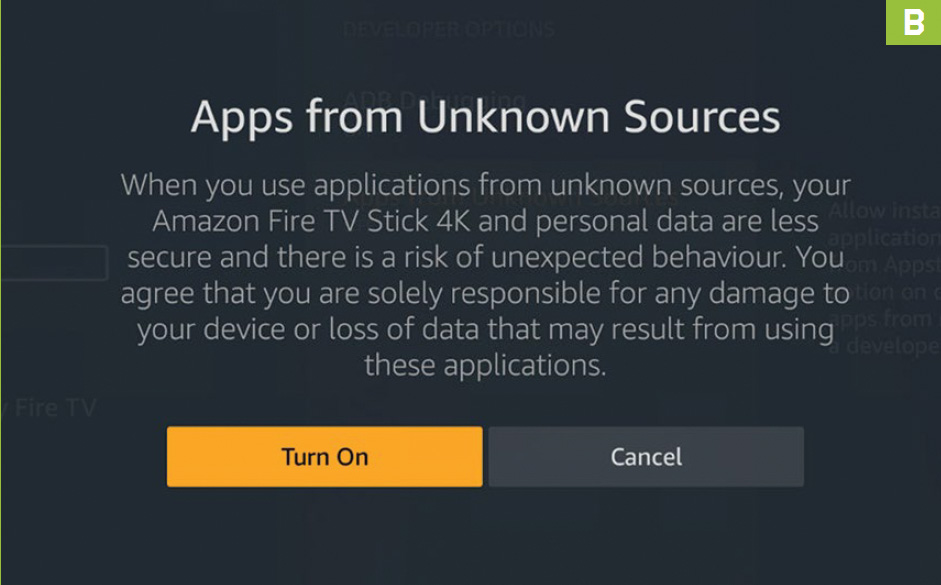 Run Kodi, work through its permissions (knowing that failing to accept some of them may well impact its ability to work at all), and you’re in—thankfully, without any of the trappings of an app ostensibly developed for smartphones and tablets. It works perfectly with the remote, and you can now connect to any network media libraries you already have set up. You’re also free to install your own add-ons [Image E] as you would be with any other Kodi client. We’ll sidestep telling you how to add your own custom add-on repositories, given that they’re usually cesspits of piracy, but it’s possible to do so if you wish to extend Kodi’s capabilities further.

Why stop at Kodi? With Downloader on board, and your device unlocked, you’re able to do whatever you like beyond the offerings of Amazon’s rather limited app store. Try a VPN to reach region-locked content; some, such as NordVPN, are available direct from Amazon, while others, such as ExpressVPN, are best installed via their Android app. Try the Android version of VLC if you’re interested in slightly more down-and-dirty streaming of your network media. Dig around for APKs (those being Android packages) and install some games. And if anything doesn’t play nice with the remote (when you’re experimenting with Android apps, that’s likely to be quite a lot), Mouse Toggle is a pretty essential extra. Open Downloader and head to http://tinyurl.com/firetvmouse to get i t—once i t’s installed, you’ll be able to double-tap the play button on your remote to bring up a mouse cursor, which is controllable by the arrow buttons.

If you want to take this to the extreme, you can use your ability to sideload apps to see what’s happening on your Fire TV Stick through your PC, essentially giving you easy remote access. TeamViewer itself requires Google Play Services, but its QuickSupport cousin works fine—use Downloader to grab it from https://download. teamviewer.com/download/TeamViewerQS.apk, and run it. You’ll note it asks for a number of permissions in order to interact with content. We can’t, at least by default, grant these, so you’ll only be able to see what’s going on without interacting. To actually gain full control, you’ll need to have root access to your Fire TV Stick, something that is only possible on certain devices, and even then the methodology is different for every one—check http://aftvnews.com/root/ for the appropriate guide for your device, while we sit here with our Fire TV Stick 4K and weep at its unrootable nature. 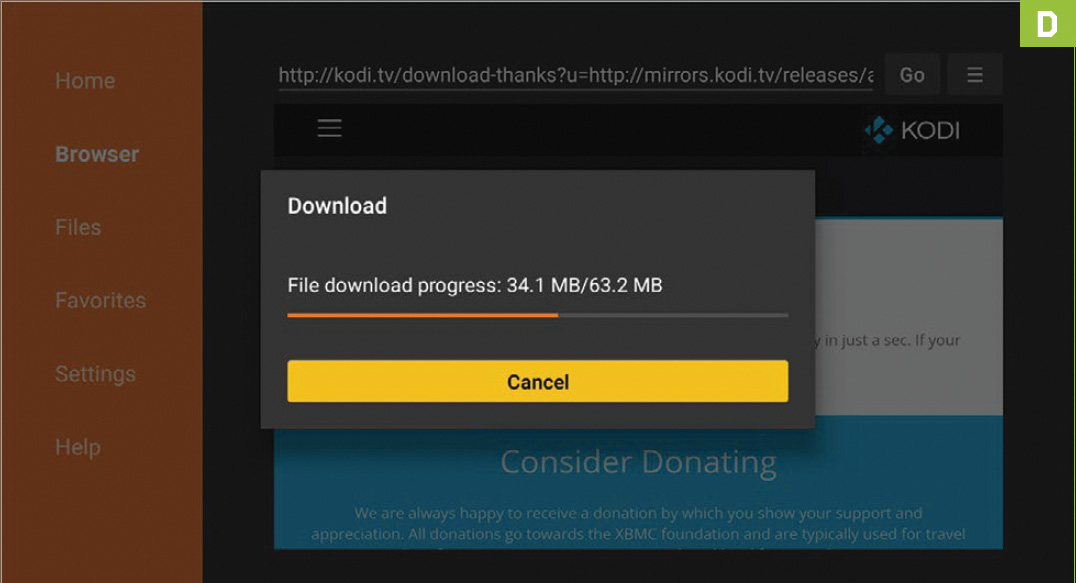