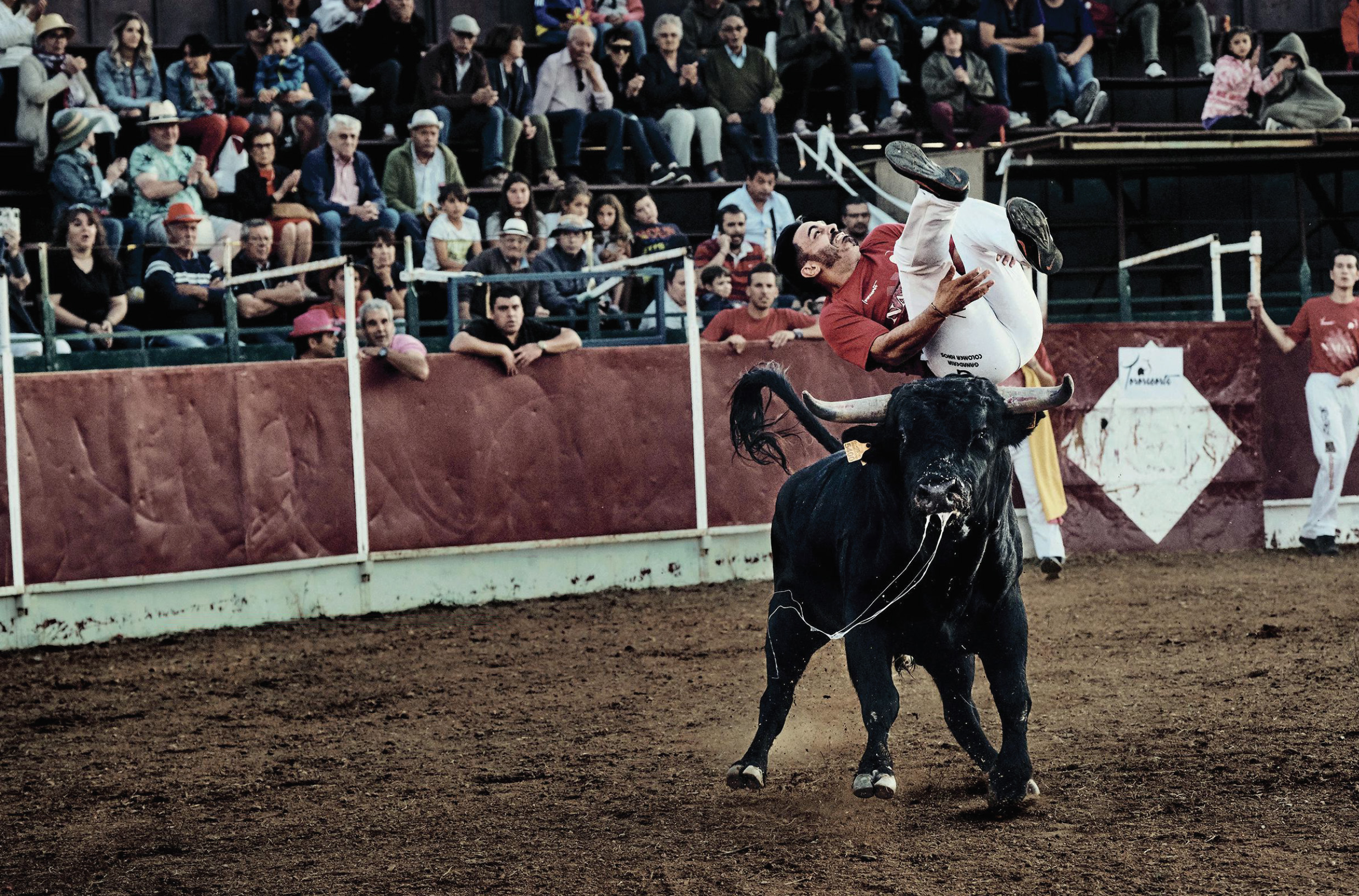 BEFORE EUSEBIO “USE” SACRISTÁN walks onto the yellow sand of the bullring in Ampuero, in northern Spain, he crosses himself twice and whispers a prayer. As he trots out to salute the crowd, enormous black bulls wait in stalls connected to the ring. The first enters at a run. From behind a low wall that circles the bullring, Sacristán watches the thousand-pound animal closely, studying its staccato sprints and the way it lowers its head and paws at the sand. Then the bull stops, muscles quivering, to survey its new territory. At first, it seems not to notice Sacristán as he steps out from behind the wall. He moves to the middle of the arena, then whistles loudly and spreads his arms. The animal turns. Sacristán, chest out, raises his chin and lifts his arms high. The bull charges. And Sacristán, improbably, does the same. 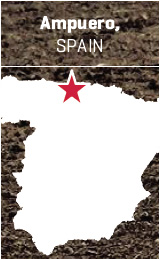 They rush toward each other. The distance closes. At the last moment before they collide, Sacristán twists and launches himself into the air, somersaulting over the animal. For a split second, at the midpoint of his flight, Sacristán’s back is turned to the bull and his feet are pointed skyward. It seems doubtful that the bull will keep charging and that Sacristán will clear it. But he lands on his feet behind it; the bull looks around, confused. In the stands, people gasp. “This is what makes me happy,” Sacristán tells me later. “I wouldn’t know how to live without bulls.”

SACRISTÁN IS A RECORTADOR, a nonlethal variety of bullfighter that, unlike traditional matadors, doesn’t use a cape to draw in a charging bull and spear it with a sword. Instead, he and other recortadores compete to see who can best elude a bull with acrobatic dodges, flips, and jumps. Neither their approach nor appearance resembles that of traditional bullfighters: Whereas matadors typically sport elaborate, gilded outfits, recortadores wear jerseys or, occasionally, embroidered vests.

By all measures, Sacristán is the best active recortador in Spain, and thus the world. He grew up in the village of La Seca, a sleepy cluster of buildings surrounded by vineyards, 100 miles north of Madrid. Compact and fit at age 29, he started competing as a recortador a decade ago and is considered especially gutsy, even in a profession that attracts daredevils. As a result, he’s the winningest recortador in modern history and has held the title of Spanish champion for three years running.

“If [Sacristán] continues as he has been competing for another two years, he’ll be the best recortador in history,” says José Enrique Granero, who founded Solorecortes, a website dedicated to recorte, or bull jumping. “He has a lot of courage,” Granero adds. “I’ve seen him compete with gorings that are still bleeding—and in those competitions, with bleeding stitches. I’ve seen him jump over bulls 30 times. There aren’t many like him.”

At the tournament in Ampuero, Sacristán and 11 other recortadores have been broken into groups, each of which will face one bull. A judge will pick a winner from each group, based on their performances, to advance to a final elimination round. Sacristán’s somersault leap is one of his signature moves, and he performs it again during his second time in the ring. Other recortadores specialize in dodging bulls; one kneels, then leans in one direction before jerking back at the last moment. Another, named Saúl Rivera, jumps over bulls, too, though less often now, after he was badly gored two years back. 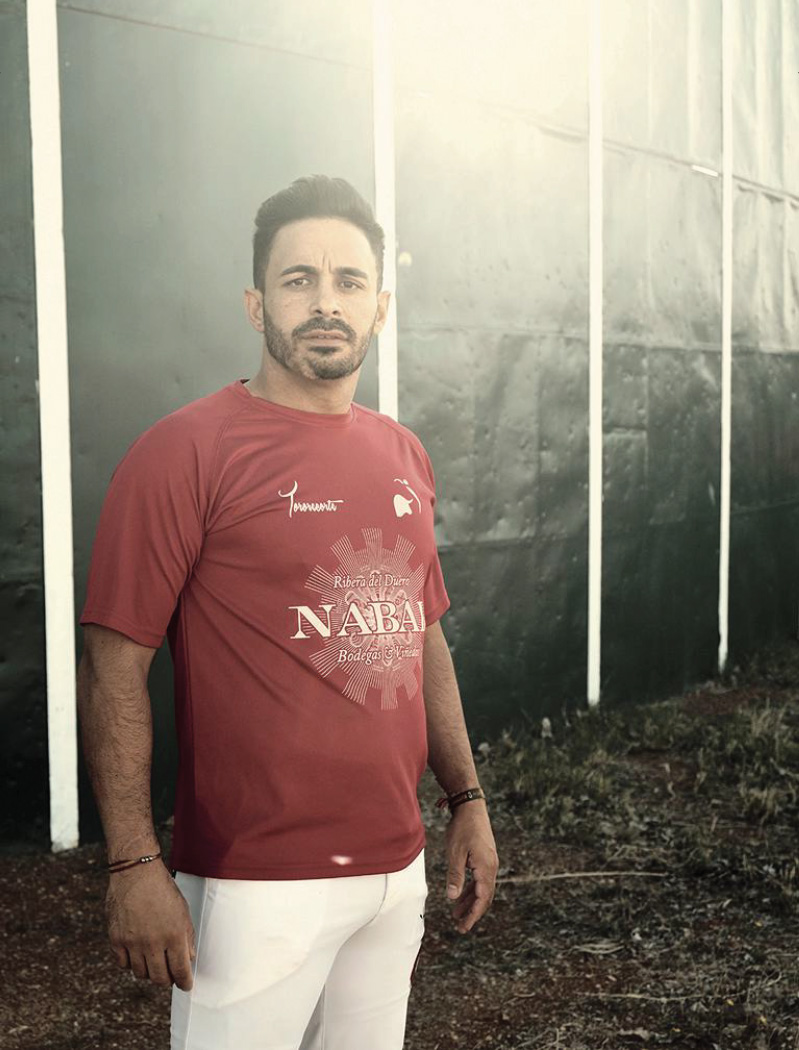 Sacristán, 29, relies on flips and dodges to evade charging bulls.

Three days ago, Sacristán himself was gored, for the seventh time in his career. In a tournament near Madrid, a bull whipped around and caught him by surprise, and off-balance. Its horns left a long gash along his upper thigh and another on his right calf. He decided to compete today anyway. “They’re not machines,” Sacristán says of the bulls. “They don’t always do the same thing.” But he adds, “That’s why recorte is so beautiful, because it’s difficult. You don’t always know how the bull will act.”

The sport grew out of the fiestas held in towns across Spain each summer, during which bulls are released through the streets for young men to dodge or to flee. Though the custom can be traced to the 16th century, formal recorte competitions started to gain momentum in Spain only over the past two decades. Sacristán’s father was a recortador before organized competitions began. When Sacristán was a teenager, he’d travel to nearby towns to participate in bull runs, and began practicing his recorte jumps by leaping into a swimming pool.

Now, as a top recortador, Sacristán has found himself in the middle of a nascent culture war. The lidia—as traditional, matador-style bullfighting is known—has been part of Spanish culture for centuries, but, over the past year or two, it has become increasingly contentious. In Spain, a number of animal-rights activists, who oppose the prolonged deaths of bulls in the lidia, have embraced recorte as a nonlethal alternative. Some leftist political parties, moreover, now advocate for outlawing the lidia outright, while the far-right party Vox has made protecting the it a pillar of its platform. 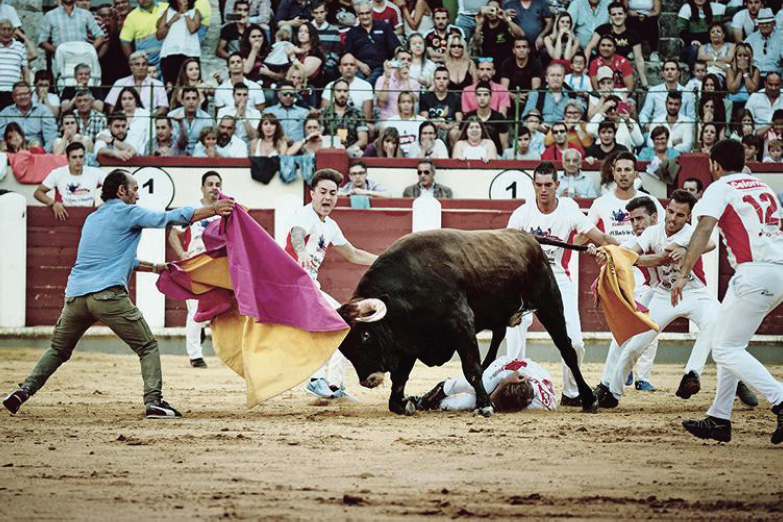 I’VE SEEN SACRISTÁN COMPETE WITH GORINGS THAT ARE STILL BLEEDING, AND JUMP OVER BULLS 30 TIMES. THERE AREN’T MANY LIKE HIM.

Sacristán, for his part, has no problem with traditional bullfighting. “It’s an art between a man and a bull,” he says. In his view, the biggest difference between recortadores and matadors boils down to economics. To become a full matador requires either personal wealth or a well-financed backer, to cover the years of costly preparation. To become a recortador, on the other hand, you need only step into a ring and hold your ground as a bull thunders toward you.

The upshot is that, given recorte’s largely rural and less affluent fan base, recortadores might see a few hundred euros if they win a competition, whereas matadors can earn thousands just for competing. All recortadores have day jobs: Sacristán works at a wine-bottling factory. Still, he competes in more than 100 tournaments each season, and often two in a single day, which has made him something of a folk hero. When he goes into bars near his hometown, people ask to take photos with him. Children want his autograph. Being a recortador doesn’t pay the bills, but “it’s the thing that gets us girls,” Sacristán says with a smile.

AFTER THE COMPETITION in Ampuero, Sacristán drives south out of town. Three friends and fellow recortadores, Cristian Moras, Pablo “Guindi” Martin, and Saúl Rivera, are sprawled across the passenger seats. The somersaults clinched Sacristán the tournament: His huge trophy lies in the trunk, along with one earned by Guindi. Sacristán drives fast, swerving past semitrailers and checking his phone. The four recortadores are already late for their next competition, which starts at midnight in Carbonero, Segovia, a village of a few thousand people, about 200 miles away. Soon Sacristán’s phone rings—his mother. She wants to know how his stitches are holding up after his recent goring. When he puts her on speakerphone, his friends start shouting that he is on the brink of death. “Idiot!” she tells one of them, laughing. 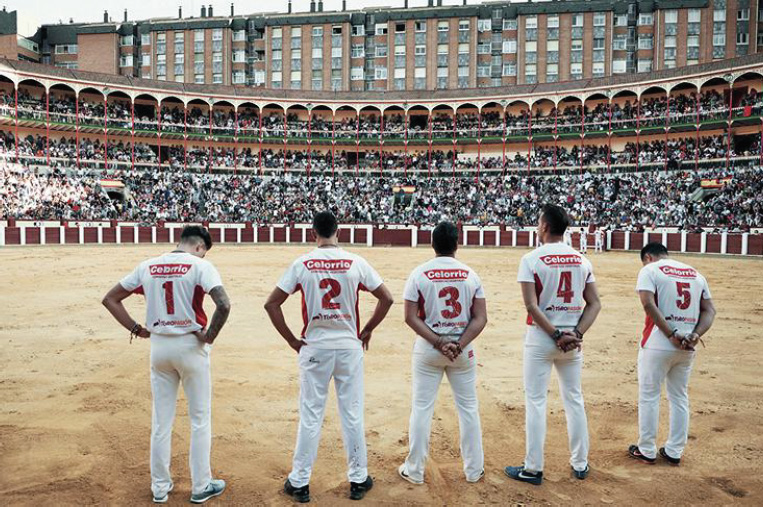 the arena in Valladolid.

It’s nearly midnight by the time the recortadores pull into Carbonero. Villagers are streaming toward a small, temporary arena, surrounded by carnival rides. The recortadores’ banter has given way to tense waiting. Another car soon pulls up, and an event organizer hands the men jerseys and goes over the schedule. It’s cold outside, but the arena is packed with people chewing sunflower seeds and drinking beer and soda. Children doze in their parents’ laps. Reggaeton music is playing. Marijuana smoke drifts through the air.

Sacristán and the other recortadores stretch beneath the stands, shaking their limbs to stay warm. A few minutes later, someone cuts the music and a marching band strikes up. Finally, the recortadores enter the arena, striding out in two lines, sporting matching jerseys. Fireworks sputter and sparkle. It’s nothing fancy, really: Just a few young guys in a shabby arena, ready to take flight. ■