GO WITH THE FLOW—AND EMBRACE THE UNEXPECTED 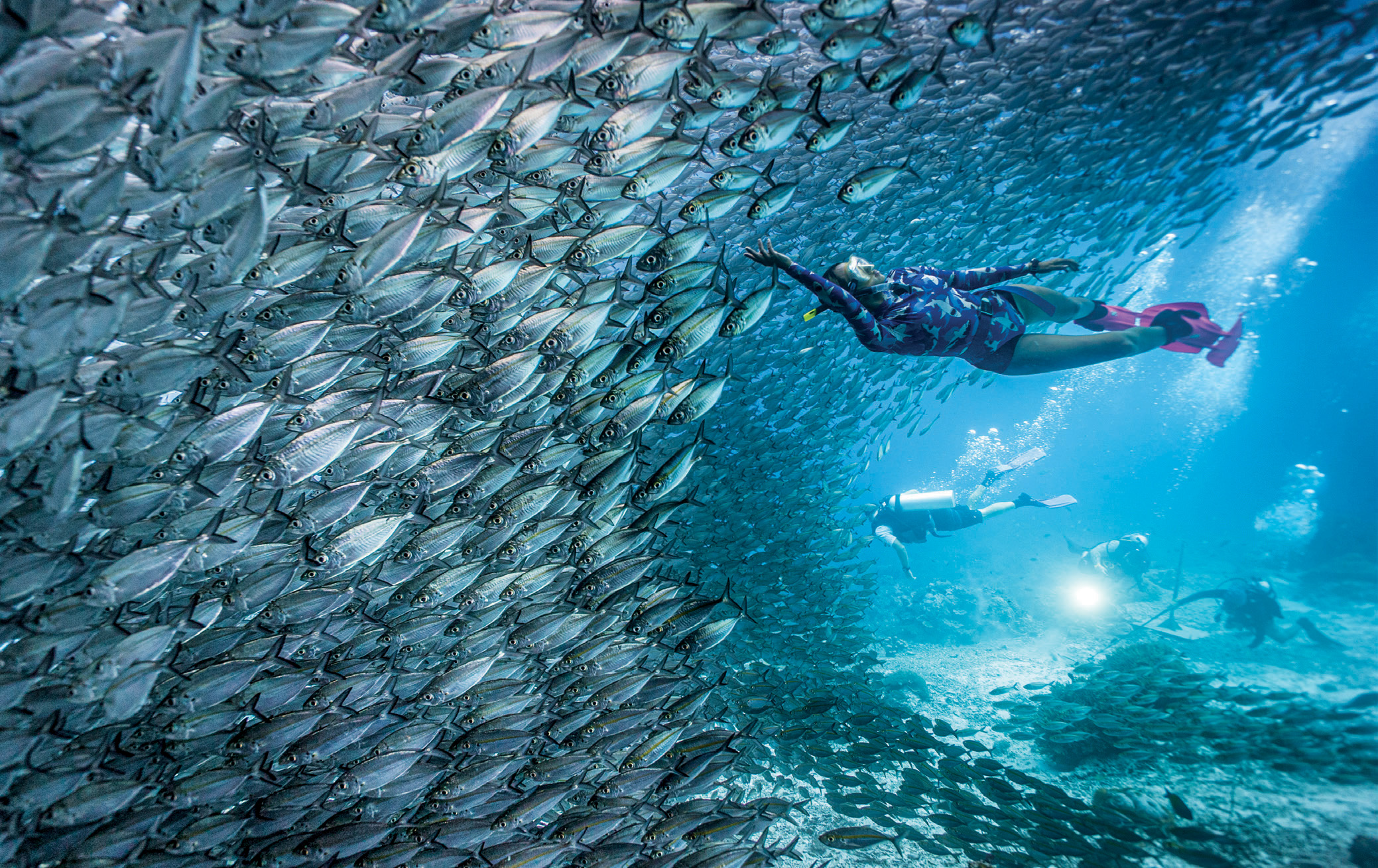 INDONESIA I first learned about the wonders of Raja Ampat from my friend Tanya Burnett, who has logged thousands of dives all over the world. “It’s an underwater photographer’s dreamscape,” she told me. “The reefs just explode with color and life. It’s almost overwhelming for some.”

It has been number one on my bucket list ever since. Recently Tanya told me of some last-minute spaces that opened up on a charter she was leading. I persuaded my husband to splurge, and that’s how we found ourselves on the Pindito, a traditional-style Indonesian schooner, with 15 other divers.

Not long after the boat leaves the West Papuan port of Sorong, the landscape becomes streamlined. Standing on the bow, I can see only water and sky and small green islets. The swirling clouds stage a melodrama overhead, but nothing disrupts the tranquility. As beautiful as it is, I harbor a feeling of anticipation. I have come expressly to see something that presently remains hidden: one of the world’s greatest collections of marine biodiversity.

The next morning, laden with dive gear, I sink under the surface of the sea, and a fantasy of marine creatures comes into view. Huge shrimp preside over the reef, their antennae reaching out in all directions. A school of surgeonfish moves like a cloud until a shark plows through, sending them scattering like wisps of smoke. At times there are so many fish I can barely see through the water.

Over 10 days, the Pindito motors 800 nautical miles across the Upper Banda Sea, stopping at reefs three or four times a day. It seems impossible that the trip could live up to my expectations, but each dive serves up new wonders: a manta swooping overhead, a solitary dolphin rolling around playfully on a reef, giant schools of snapper and fusiliers whirling around us like tornadoes, venomous sea kraits wafting through sunlit water.

The landscape is mostly sea, but we occasionally stop on shore. One day we clamber through a limestone cave and scamper down a dark hole to discover a room with a clear, serene pool. Naturally, we jump in, floating on our backs, suspended in the stillness. Later in the journey we motor to Banda Neira in the Spice Islands. The once rare nutmeg trees that dot this verdant idyll lured Dutch traders who brutalized the residents and built a thick stone fortress in the 1600s. Now, locals sell the spices in fragrant markets.

Most of the time, however, we are in the water. Among the great delights of diving is never knowing what will appear.

One day, floating after a dive, Tanya spots what look like dolphins. “No! Pilot whales!” she yells. “Come on!”

We scramble into the dinghy and race over to them. I’m not sure if these toothed whales are safe to swim with, but before I know it, Tanya is slipping over the side of the boat like a seal. My husband and I look at each other and follow suit. When I gaze down, my fear evaporates. Hundreds of sleek whales undulate in unison around and below us. I have never felt at once so present and alive, as if the boundary between human and animal thinned for just a few minutes. On the surface again, Tanya tells us that they were in fact melon-headed whales, an elusive oceangoing relative of the pygmy killer whale. Even the Pindito’s owner and captain had never had the opportunity to swim with them.

Some places can surpass even the greatest expectations. ■