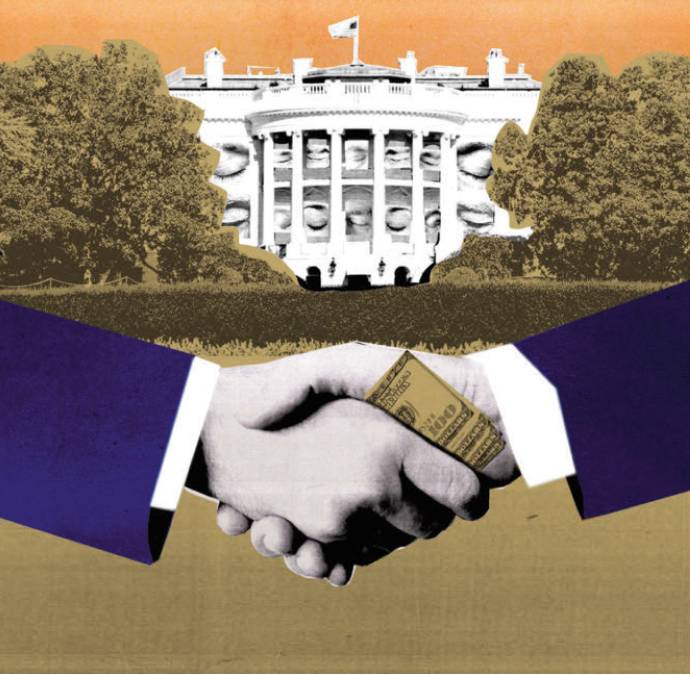 THE DIPLOMATS who have testified to Congress over the past two weeks have underlined a fundamental point about the impeachment investigation into Donald Trump: it grows out of America’s fight against corruption in eastern Europe. First George Kent, a State Department official, explained that since Ukraine’s revolution in 2014 America had come to see corruption as a vital tool of Russian influence. Promoting the rule of law, Mr Kent said, was not just a human-rights concern but at the heart of American security policy.

Then Marie Yovanovitch, a former ambassador to Ukraine, recounted how figures linked to Ukrainian oligarchs had convinced President Trump to have her removed. The prize Mr Trump sought, an announcement that Ukraine was investigating the son of his electoral rival, former Vice-President Joe Biden, was rooted in Mr Biden’s role as point man for rule-of-law concerns in eastern Europe. America had tried to fight corruption in Ukraine, and corruption in Ukraine was fighting back.

America’s effort to combat graft in central and eastern Europe is now in trouble. The Trump administration has given it only intermittent support. Meanwhile, the impeachment investigation is highlighting behaviour in America that resembles the practices it condemns elsewhere. The damage is “incalculable”, says a senior State Department diplomat (and life-long Republican). “It will take decades to rebuild our credibility. What other countries are seeing in this White House is everything we’ve preached against.”

This is a pity. Anti-corruption activists in former communist countries have relied on American support ever since the end of the cold war. American aid has backed independent investigative media, trained judges and prosecutors and helped set up transparent registers for government procurement. The State Department budget for Europe and Eurasia ($615m last year) is a lifeline for civil-society organisations. In Ukraine, Romania and Moldova, America has supported reformist politicians when they came under attack from oligarchs. In Poland and Hungary it has backed independent judges when ruling parties tried to subvert the courts.

As relations with Russia soured early this decade, American intelligence agencies grew concerned about Russian money-laundering flows. “Corruption was being used as a tool of coercion by outside actors, but it was also rotting NATO and EU members from inside,” says Victoria Nu-land, an architect of policy under the Obama administration. Mr Biden began visiting central and eastern Europe to stress that America now saw corruption as a national-security issue.

“We always felt we had the support of the United States embassy,” says Cristian Ghinea, a Romanian anti-corruption activist and member of the European Parliament. America and the EU defended Romania’s tough anti-corruption prosecutor when she came under attack. In Bulgaria American pressure repeatedly helped to protect civil-society groups from government reprisals.

America’s emphasis on fighting corruption began to waver in 2017, when A. Wess Mitchell took over responsibility for State Department policy in eastern Europe. He believed America’s sharp criticism of corruption was hurting it diplomatically, pushing countries like Hungary, Romania and Bulgaria closer to Russia. Mr Mitchell resigned early this year. But while many ambassadors still pursue anti-corruption policies, they can no longer be sure the White House is behind them.

Instead of backing anti-corruption stances by its embassies, the Trump administration has sometimes undercut them. Mr Trump’s withdrawal of Ms Yovanovitch (and the failure of Mike Pompeo, the secretary of state, to defend her) had a chilling effect on diplomats. Bill Taylor, who replaced Ms Yovanovitch as ambassador, has testified to a “second track” of diplomacy, in which those with personal connections to Mr Trump (such as his lawyer, Rudy Giuliani) sidelined the government’s official policymaking process.

A similar split has emerged in Hungary, where Mr Trump’s politically appointed ambassador (a big campaign donor) arranged a visit to the White House by Viktor Orban, the prime minister. That circumvented officials who wanted to keep Mr Or-ban’s corrupt and Russia-friendly government at arm’s length.

In Ukraine, the anti-corruption reformers whom America supported for years have become collateral damage in the impeachment drama. Defenders of Mr Trump have revived baseless allegations against AntAC, a renowned rule-of-law group, that were originally concocted by Ukrainian officials the group accused of corruption. Pro-Trump social-media botnets have spread conspiracy theories about Daria Kaleniuk, the group’s director. “It is the first time we have been hit with such a well-organised smear campaign from America. We are used to that coming from kleptocrats here in Ukraine,” says Ms Kaleniuk.

The impeachment conflict may also hurt independent anti-corruption prosecutors, such as those in Romania, who depend for information on co-operation with American intelligence agencies. Those agencies will be less eager to share information if they do not think the White House cares about the issue. Anti-corruption activists say it does not; they have learned to phrase their appeals as efforts to protect American investors. “Words like ‘rule of law’, we understand now, don’t open any doors with this administration,” says Melissa Hooper, of Human Rights First, an American advocacy group.

Under Mr Obama, budget messages to Congress described foreign aid for “strengthen[ing] rule-of-law and anti-corruption measures” in Europe as part of America’s strategy for countering Russian aggression. In Mr Trump’s latest budget message the word “corruption” does not appear in connection with Russia. USAID still offers grants for rule-of-law programmes, but the administration has tried to slash their budgets each year. For 2020 it asked that non-military aid to Ukraine be cut from $250m to $145m, and to Moldova from $52m to $18m. So far Congress has kept aid at the higher level, and anti-corruption activists in the region say American embassies still support them.

In other places America is simply a less significant part of the story. In Slovakia, where a huge anti-corruption movement over the past year has upended the political establishment, the Americans “haven’t been that important”, says Miroslav Beblavy, an MP from an anti-corruption party. Relations have been dominated by Slovakia’s decision in August to buy American F-16 fighter jets. Indeed, many countries in the region are buying American hardware. Romania and Bulgaria have both recently bought F-16s. They would be happy to see relations go back to a more transactional basis with fewer pesky questions. “They’re all buying our planes because that’s how they get influence,” says Ms Hooper.

Yet the security provided by such deals will be illusory if formerly communist countries do not battle corruption. On the American side, the political will is dwindling. Many frustrated anti-corruption experts have left the State Department, Treasury and other agencies; others are considering it. “They can survive another year,” says a former State Department official. “Four would be hard.” ■