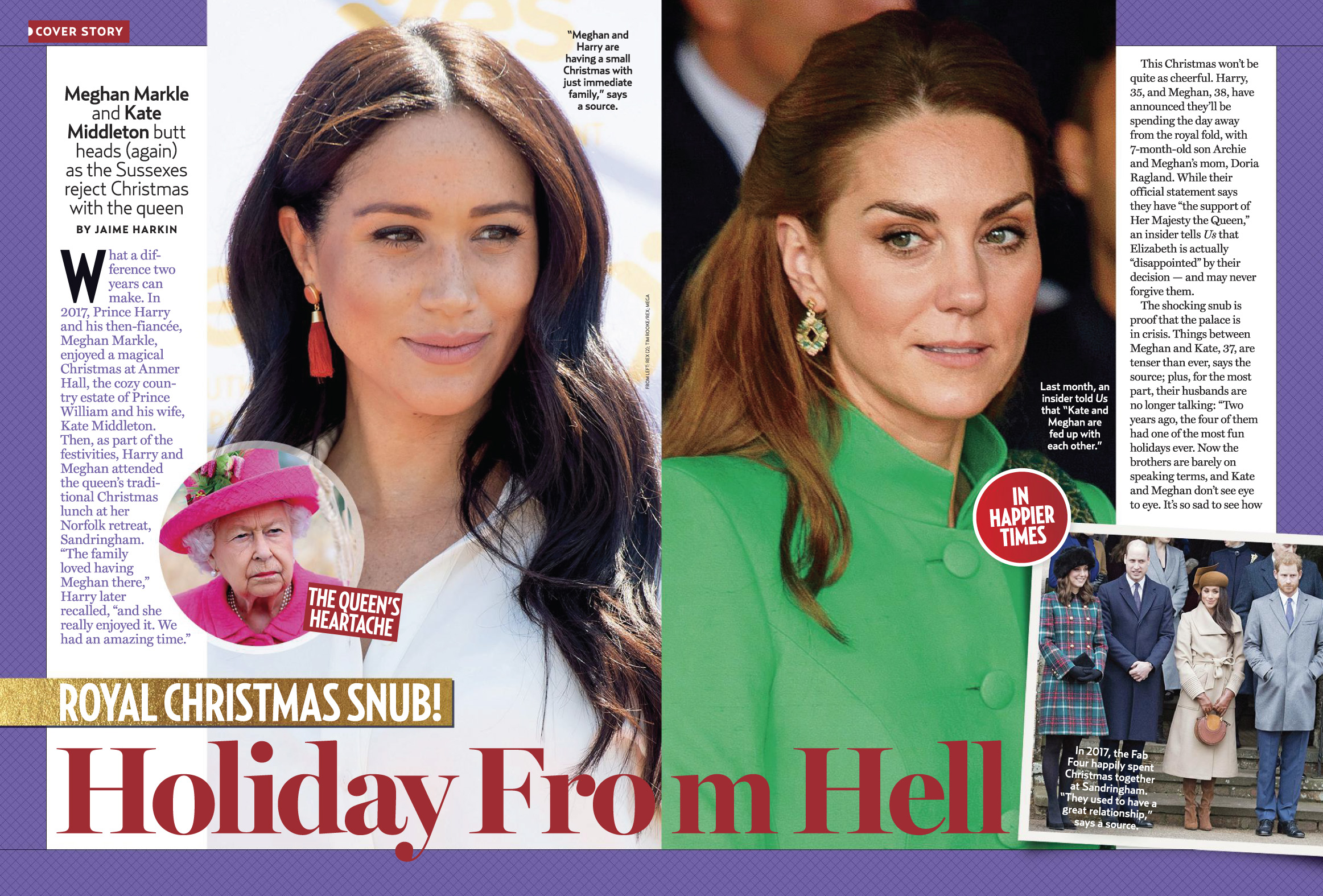 “Meghan and Harry are having a small Christmas with just immediate family,” says a source.

Last month, an insider told Us that “Kate and Meghan are fed up with each other.”

In 2017, the Fab Four happily spent Christmas together at Sandringham. “They used to have a great relationship,” says a source

What a difference two years can make. In 2017, Prince Harry and his then-fiancée, Meghan Markle, enjoyed a magical Christmas at Anmer Hall, the cozy country estate of Prince William and his wife, Kate Middleton. Then, as part of the festivities, Harry and Meghan attended the queen’s traditional Christmas lunch at her Norfolk retreat, Sandringham. “The family loved having Meghan there,” Harry later recalled, “and she really enjoyed it. We had an amazing time.”

This Christmas won’t be quite as cheerful. Harry, 35, and Meghan, 38, have announced they’ll be spending the day away from the royal fold, with 7-month-old son Archie and Meghan’s mom, Doria Ragland. While their official statement says they have “the support of Her Majesty the Queen,” an insider tells Us that Elizabeth is actually “disappointed” by their decision — and may never forgive them.

The shocking snub is proof that the palace is in crisis. Things between Meghan and Kate, 37, are tenser than ever, says the source; plus, for the most part, their husbands are no longer talking: “Two years ago, the four of them had one of the most fun holidays ever. Now the brothers are barely on speaking terms, and Kate and Meghan don’t see eye to eye. It’s so sad to see how far they’ve drifted apart.”

Meghan and Kate’s once-close relationship has deteriorated to the point where they don’t want to be in the same room. “There have been so many jabs and swipes toward each other,” an insider told Us in October. Now the source says jealousy is adding fuel to the fire: “Kate’s very sweet-natured and doesn’t enjoy conflict — she’s not a rule breaker like Meghan.”

But she might like to be. “Meghan’s had a tough time adapting to royal life, but Kate can’t help envying her for having the confidence to stick up for what she wants.” The Christmas shake-up is the perfect example. “Kate loves spending holidays with the queen,” says the source, “but by the end of the year, she’s worn out and just wants to chill with her immediate family instead of attending a three-day formal celebration.” Kate, mom to Prince George, 6, Princess Charlotte, 4, and Prince Louis, 19 months, is resentful that her sister-in-law gets a break, says the source, as “Christmas with the royals isn’t the slightest bit relaxing.”

It doesn’t help that Harry and William aren’t getting along. “Their rift is one of the main reasons behind Harry and Meghan’s decision about the holidays,” says the source. At the heart of their conflict? William thinks Harry should stop airing the family’s dirty laundry, as he did in his recent ITV documentary and lawsuits against the British press. “William’s tried talking sense into Harry, but he just won’t listen,” says the source.

As a result, Harry’s retreated even further. “Since Archie was born, Harry and Meghan have shut themselves off from the world,” says the source, who adds that the pair hope to give Archie a sibling by the end of next year and are looking to permanently leave the U.K.: “Africa’s at the top of their list. They love it there and could continue their charity work.” Meghan’s native L.A. is another option — they’ve even looked at homes there. “It would be more of a holiday home but could turn into something more,” says the source.

As Harry grows more estranged, he could be putting his $40 million fortune at risk. “It’s unlikely the queen would cut him off completely, but he could risk losing a chunk of his fortune, along with his royal privileges, if he were to give up his title,” explains the source, who expresses doubts about Harry’s ability to cope in the real world: “He didn’t even know what a mortgage was until recently!”

END OF AN ERA

As chaos prevails at the palace, the queen is stuck trying to make peace. And though the source says the 93-year-old matriarch understands why Harry and Meghan want to take some family time — and “thinks it’ll do Meghan good to step back from the spotlight and spend time with her mom” — she’s also upset about all the unwanted attention the couple has drawn to the family. The source says the queen and her husband, Prince Philip, want to make the best of the time they have left. “It’s a very big deal that Harry and Meghan aren’t putting in the effort to spend Christmas with the queen,” says the source. “Philip’s 98 — they don’t know how many holidays they have left!”

Still, the Duke and Duchess of Sussex are proceeding as planned, despite the consequences. “The drama surrounding them has caused huge stress,” says the source. But their focus is on each other and Archie: “Their little family is their No. 1 priority.”