FOR a car maker with such engineering might, it makes you wonder what has taken Mercedes so long to produce a direct rival for the Tesla Model S. The US firm proved that there was a large and growing appetite for electric saloons costing well in excess of £100,000 way back in 2012 – and only now has Mercedes showed its hand.

The Vision EQS was the German firm’s star at the 2019 Frankfurt Motor Show, and before it goes on sale in 2021, Auto Express was invited to take a closer look at, and get behind the wheel of, this Tesla rival.

Measuring in at an impressive 5.3 metres long and with a design defined by a single bow arching along the full length of the body, the EQS has real presence – especially when you’re away from the bright lights of a motor show hall. Particular attention has also been paid to the car’s lighting system; the headlights are powered by rotating lenses with holographic beams, the black-panel grille is illuminated by a matrix of 188 LEDs, and instead of installing rear lamp clusters, the design team has seamlessly integrated 229 red stars into the bodywork to act as the car’s brake and tail-lights.

But for the first time the giant door slides open and we are allowed to climb into the driver’s seat. Design chief Gorden Wagener has taken the idea of ‘purity’ to the extreme with the EQS’s cabin by removing all the gauges, displays and controls. All that’s left is a giant central display, which gives access to the car’s on-board functions, floating above a surface of artificial leather made from recycled plastics.

Plus we’re told that the final production model will look much the same when it arrives in 2021, so the design is more than a match for Tesla’s – and its performance should be, too. Under the skin, two motors combine to develop around 480bhp and more than 700Nm of torque – enough to accelerate the EQS from 0-60mph in a lot less than five seconds. The battery, which is located in the totally flat floor, is said to be in excess of 100kWh, which will give the car enough capacity to have a range of up to 400 miles, making the EQS a capable long-distance cruiser.

Of course, that’s the theory. In reality this show car we’re driving is constrained by the usual multi-million pound, one-off concept car limitations. It’s handcrafted and fragile, with a single motor and a smaller battery, so it moves at not much more than walking pace, taking every corner with caution on its enormous and delicate 24-inch wheels.

Still, the serenity afforded to the driving experience by the electric powertrain makes it a supremely elegant and relaxing place to spend time. And one that can be yours in the next 18 months. 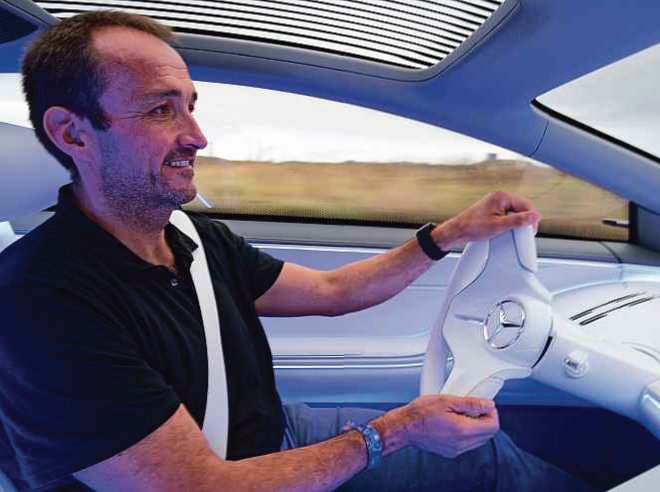 Multi-million pound concept is a one-off, but gives a glimpse of luxury EV due in 2021

MERCEDES will once again be late to the party, this time with a luxurious electric saloon, but at least it should be worth the wait. The EQS has been engineered to be electric from the very beginning, so it has all of the advantages in terms of space, design and tech that this brings. ■