Photo skills
/ one to one
A quick bite of the Big Apple
Dan Tidswell successfully combines his twin passions of commercial and model photography. Niall Hampton joins him on a street fashion shoot in New York Based in Essex, Dan divides his time between a commercial photography business (photoengineers.co.uk) and educating others, via one-to-one tuition and group workshops in the UK and abroad. dantidswell.co.uk 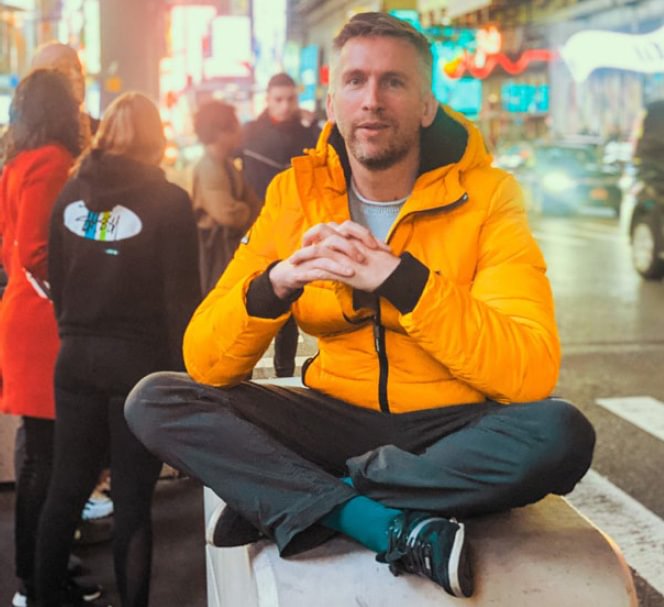 Working out how to turn a prolonged love of photography into a successful career is something that many a keen amateur mulls over. There are opportunities to be found if your photographic niche is in demand, while social media means that it has never been easier for somone to find you.

This month’s leading pro earns his living as a commercial photographer – shooting a wide range of work under that umbrella – and utilises old and new marketing techniques to bring in commissions. Yet Dan Tidswell didn’t take a conventional route into photography – if indeed there is one these days. His previous career as an IT security consultant involved travelling to places all over the world, which he started chronicling through photography. Over time, he built up a considerable collection of diverse images, so when he decided that the time had come for a career change, he already had a photography portfolio, so turning pro was the obvious, and natural, progression.

Today, Dan has a varied client roster and runs his own studio, The Loft, in Essex. He’s also an educator, conducting photography workshops for small groups and individuals, plus tuition on Adobe software. He shoots images for stock libraries and is also working on a book. In amongst all this, he maintains an active Instagram presence (@dan_tidswell_photographer).

So when Dan invited Digital Camera on one of his recent assignments, to the Big Apple to shoot some street fashion images, we booked our tickets quicker than you could say New York, New York…

A day after arriving, it seemed that we had brought the UK weather with us. Heavy rain meant Dan had to rethink some of his intended locations. One shot he wanted to get involved his model, Erin Williams, crossing East 42nd St outside Grand Central station. En route to the location on foot, we were glad of a break from the wind and rain, so we headed inside the station to take a picture of Erin under a chandelier. 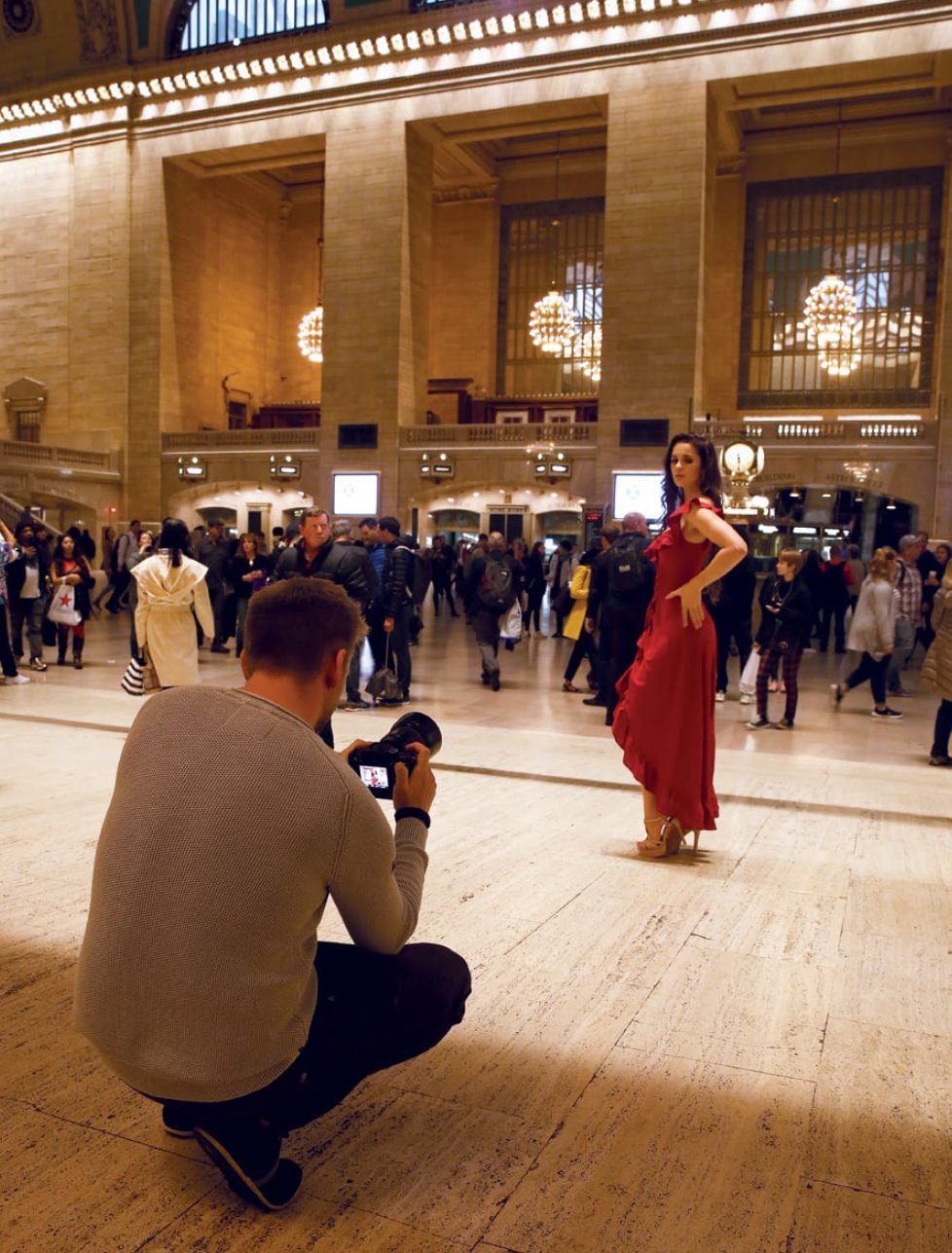 The tilting rear screen is invaluable for nailing compositions quickly.

Shooting on a Sony Alpha 7R III, Dan composed a test shot on the rear of the camera, setting his focus point on the touchscreen. Feeling that this particular shot might work better in black and white, he called up a Monochrome preview to check – raw image capture meant that he had a colour version if he needed it. Dan tried three different shots in the station before we moved outside. Crossing East 42nd St and leaving Erin on the opposite side, Dan gave her the signal to strike a static pose before following the rest of the pedestrians.

Our next location involved a taxi ride from Midtown to the World Trade Center, where Dan was hoping to take an image in the Oculus shopping centre. Our stuttering progress southwards through Manhattan provided a good opportunity to find out more about Dan’s approaches to photography and his shooting style. Having started out using Canon DSLRs, then progressing to medium format cameras for studio work, he made the move to the Sony Alpha full-frame mirrorless system in 2015. In the absence of competition from established big hitters Canon and Nikon, Sony had this market to itself for several years, but kept on innovating. Dan’s a big fan of the A7R’s high-resolution images and wide dynamic range. Asked about making the change from DSLR to mirrorless, he couldn’t imagine going back to shooting on the former. As well as the size and weight, he finds the real-time image preview invaluable. 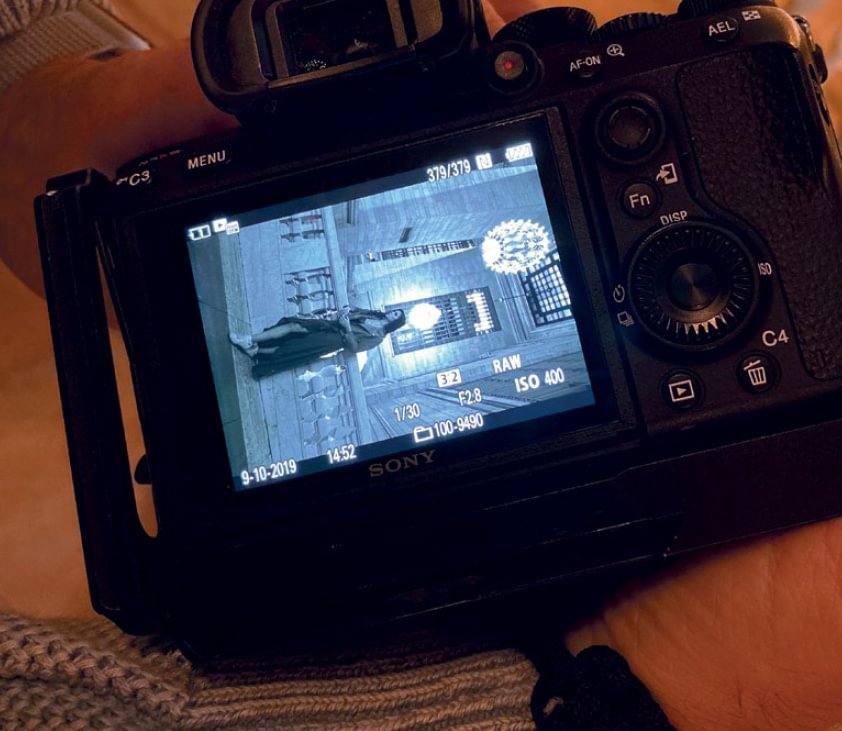 Dan previewed this scene in black and white to see if it worked better than colour.

Given that modern EVFs are improving all the time, are fast and aren’t as susceptible to blackouts, Dan relishes the instant feedback while tweaking exposure settings on the fly and being able to see their effect on the scene in front of him. He eschews using tripods for location work, as it slows him down, and knows that he has a couple of stops of latitude when shooting handheld in low light, thanks to the A7R III’s in-body stabilisation.

And stability was an important factor for our next location, for Erin at least, as she had quickly donned a ballerina’s outfit to perform a relevé on a subway platform at 86th Street.

For this shot, Dan framed from a low position, again using the rear touchscreen to select his focus point. He’s particularly fond of Sony’s Eye AF, with its unerring ability to find and lock on to your subject’s eyes. Many pros say that eye autofocus has revolutionised portrait photography and Sony’s execution of the feature – alongside several other innovations in the Alpha range – is widely fêted. 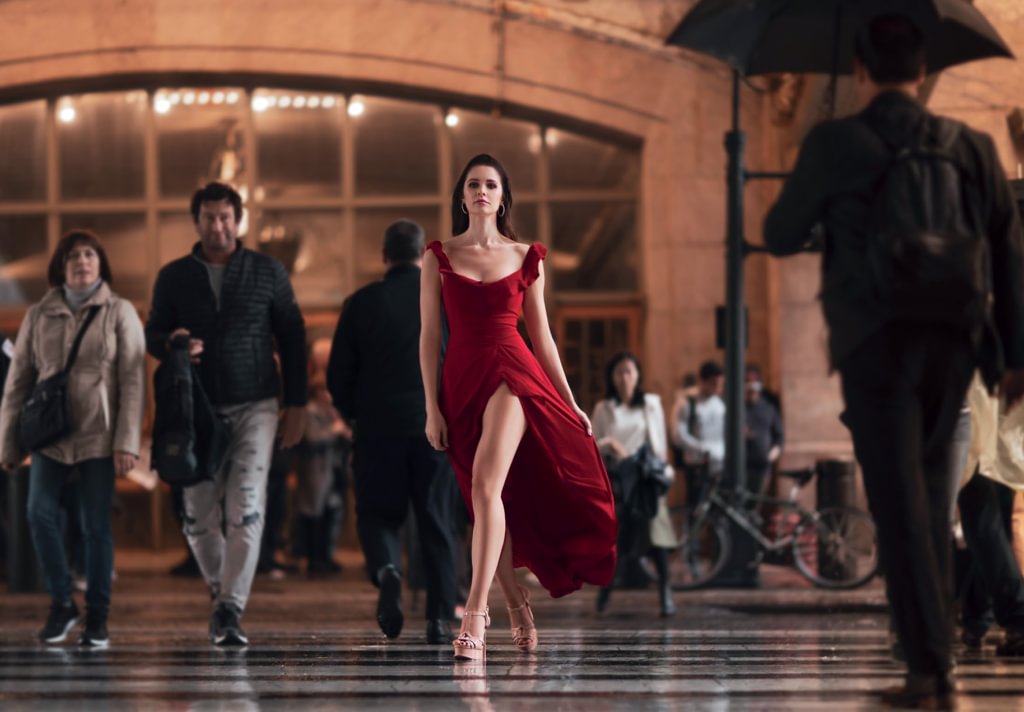 See more of Erin and Dan’s collaborations on Instagram: @erinwilliams_1 Two tracks run north from Uptown’s 86th Street, carrying express and local services respectively. Setting up on the local platform, and firing off a couple of test shots, Dan got the best results when the train was leaving the station and accelerating away. Positioned just in front of a pillar, Erin assumed the relevé position. Shooting almost wide-open with the train picking up speed, Dan’s choice of shutter speed froze Erin against the moving backdrop, creating another ‘keeper’ image. The aluminium sides of the train created pleasing streaks and the blurred stars and stripes flag at the end of every carriage combined to provide a colourful abstract effect.

Dan tried a couple of other compositions before we broke for lunch to discuss the plan for the evening’s shoot. With the rain forecast to have passed by 6pm, Dan wanted to shoot some Manhattan street scenes for his stock library.

Starting in the area around 42nd Street as day turned to night, Dan captured some images of a pedestrian crossing overlooked by the moon, which was making a fleeting appearance through a break in the clouds. Removing his 24-70mm Sony lens, he switched to his Canon EF 85mm f/1.2, usable on the E-mount via an adaptor.

“This is probably my favourite lens of all time,” Dan enthused. “You do get distortion when using it but also a unique character, which I’ve yet to see in any other lens.” This particular lens – now discontinued – has an interesting backstory: it is actually a rebuild, combining innards from two life-expired donor lenses of the same type. Used wide open at f/1.2, the bokeh it produces is very pleasing, as Dan proved by shooting the tail lights of various vehicles corraled at a junction.

Times Square was our next stop, but it was too early to grab any images free enough of crowds. So for these two Englishmen in New York, our street fashion and stock shoot was coming to an end. We’d be flying back to the UK in the morning – hopefully leaving the bad weather in the US… Feedback on test shots helps put the model at ease.
■