features
/ dwellings
All the Essentials
An architect draws on the best of Los Angeles living for his family’s new home.
TEXT BY IAN VOLNER
PHOTOS BY | @LAURE JOLIET LAURE JOLIET On a hillside in Los Angeles, architect Clive Wilkinson created a three-story home for himself, his wife, Elisabeth, and their children. “Many of Los Angeles’s iconic modern houses float above the city like tethered spaceships on stilts,” says Clive. “I had always yearned for the opportunity to design my own floating home.” Custom black zinc panels and sandblasted concrete form the exterior. The kitchen sits beneath rafters of Douglas fir on the top floor. The counter and cabinets are by Varenna for Poliform, the bar stools are by BassamFellows, and the side chair is by Verner Panton for Vitra.

In the conventional reading of the Los Angeles landscape, there’s the beach, there’s the hills, and there’s the flatlands: three of the city’s four “ecologies,” as the critic Reyner Banham famously called them—each with its own brand of domestic architecture. So what happens when these ecologies meet?

One architect got to find out when it came time to choose a site for his own family’s home. “It’s a complete anomaly—perched on a hill about eighty feet up, absolutely flat below.” That’s Clive Wilkinson speaking—the South African–born designer of some of the most innovative office spaces in America, favorite of clients from start-ups to blue chips, from Barclays to Lululemon—who had the good fortune after nearly 30 years in L.A. to happen upon a place he had never seen. “The neighborhood is called a number of things,” he notes. On the map, it’s a semi-blank spot near where Palms meets Mar Vista, more or less on the edge of the flatlands. And yet, there it is, a narrow lot on a steep escarpment with stunning views, now occupied by a house that partakes of everything Los Angeles has to offer.

Clive had recently remarried and needed to create a home for his newly mixed family, with room for both his own two children, ages 9 and 7, and his wife Elisabeth’s 13-year-old. Considering the long and hallowed history of architects designing their own homes (including, in L.A. alone, such luminaries as Neutra and Gehry), this might have seemed a daunting prospect. Yet this was not Clive’s first time at the rodeo. “I built my last house as well,” he says, describing it as an “introverted” scheme around a central swimming pool. The new one is more of a hybrid.

On the one hand, it’s very much a hill house. Encompassing 3,700 square feet and spilling partway down the slope, the plan is organized around a staircase accessed directly from the entry, which itself is a few steps from a wall along the street with a heavy pivot door. As soon as you swing the door open, the house’s commanding site is evident. “One side of the house is carved away to have that experience of ‘Wow, that’s an amazing view,’” says the architect. The combined living, dining, and kitchen area on the top floor also emphasizes the panorama. On one of his earliest visits to L.A., Clive recalls having dinner at a house in the Hollywood Hills, looking out at the twinkling lights of the city and thinking, “This is the perfect place to be.” Now he has his own version.

Impressive as the views are, the house also has all the simplicity and domesticity of flatland residences—the cozy bungalows and Mission and Spanish-Colonial Revival homes that are standard fare for the region’s broad valleys and coastal plains. Sleeping spaces for the children are below decks and are complemented by play spaces. Looking out to the swimming pool, the lower floors feel more typically domestic than the sweeping spaces above. Even upstairs, the library-lounge is situated away from the views to the south, creating a comfy “retreat room,” as Clive calls it, that’s ideal for movies and family hang sessions. A work by Michael Salvatore Tierney hangs in the entry. The terrace, furnished with pieces by Noé Duchaufour-Lawrance for Ligne Roset, is the perfect spot for taking in views of the L.A. basin.

“With the separate levels, children and adults have their own territories but can also come together.”
CLIVE WILKINSON, ARCHITECT AND RESIDENT Chairs by Charles and Ray Eames, Dirk Vander Kooij, and Verner Panton surround a table designed by Clive and crafted in South Africa by his father, Ken. Overhead is a custom brass pendant by Cole Lighting. The laser-cut metal stair railing is by Sing Welding, and the white oak flooring is from KB’s Floors. In the living area, sofas and a chair by Piero Lissoni for Cassina join a floor lamp by Michele de Lucchi for Artemide.

“I wanted it to feel almost like you’re in a helicopter when you’re on the top floor.”
CLIVE WILKINSON The ground floor, which holds the children’s bedrooms as well as a den and gym, opens to the pool terrace From the street, the house rises two stories, dropping down on the opposite side to follow the slope. Clive envisioned the top floor as a “crow’s nest.” 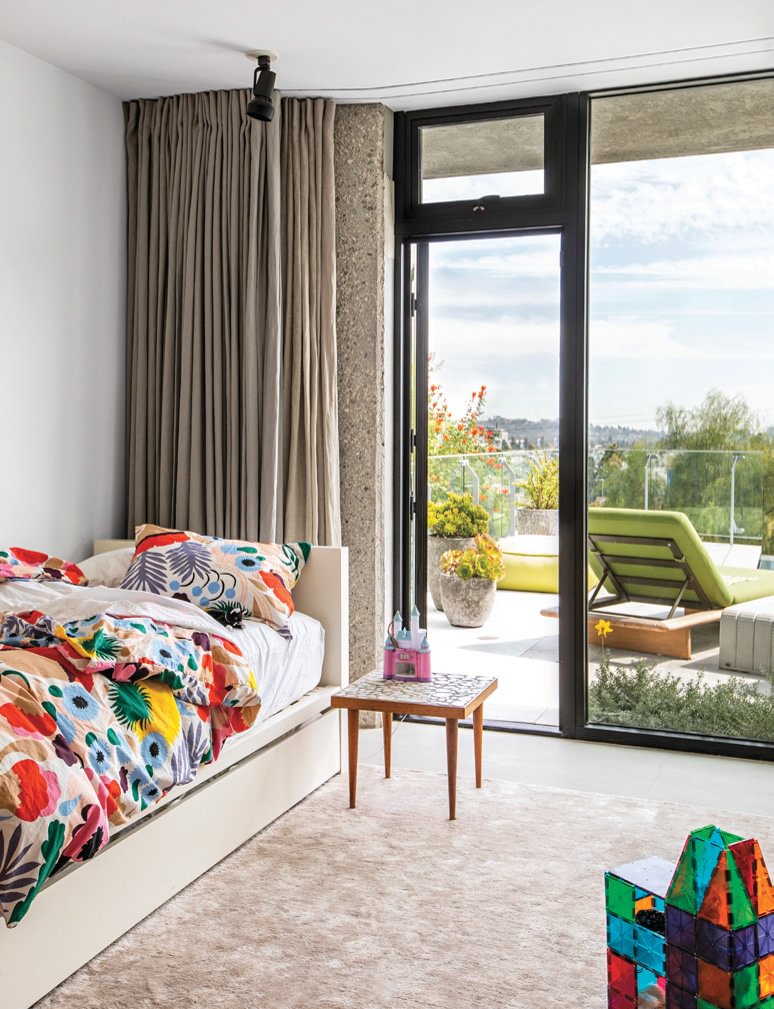 Clive himself has an easygoing charm and something of a beach-bum sage air—meditative, scruffy, but self-aware. “The fact that the house is fifteen minutes from the beach is a dream come true,” he says. While the house is by no means an oceanfront property, Clive has still managed to import a sense of breezy, beachy living through the interior treatments, like cushy, low-slung modular seating, colorful accents, and organic finishes in the fixtures, walls, and sharply slanting roof.

With a catalog that includes large-scale work in California for Google (he’s doing the interiors for its new headquarters), 20th Century Fox (a converted industrial space under a stunning timber truss), and software giant Intuit (a beguiling maze of stairways, cantilevers, cutaways, and more), you might wonder how such a relatively small project—for a particularly discerning client—measured up. “I put a lot into this,” says Clive. What he’s gotten out has already proven a hit, as much with family and friends as with its creator. Deep in the heart of L.A., it’s a house with something for everyone, just like the city itself. 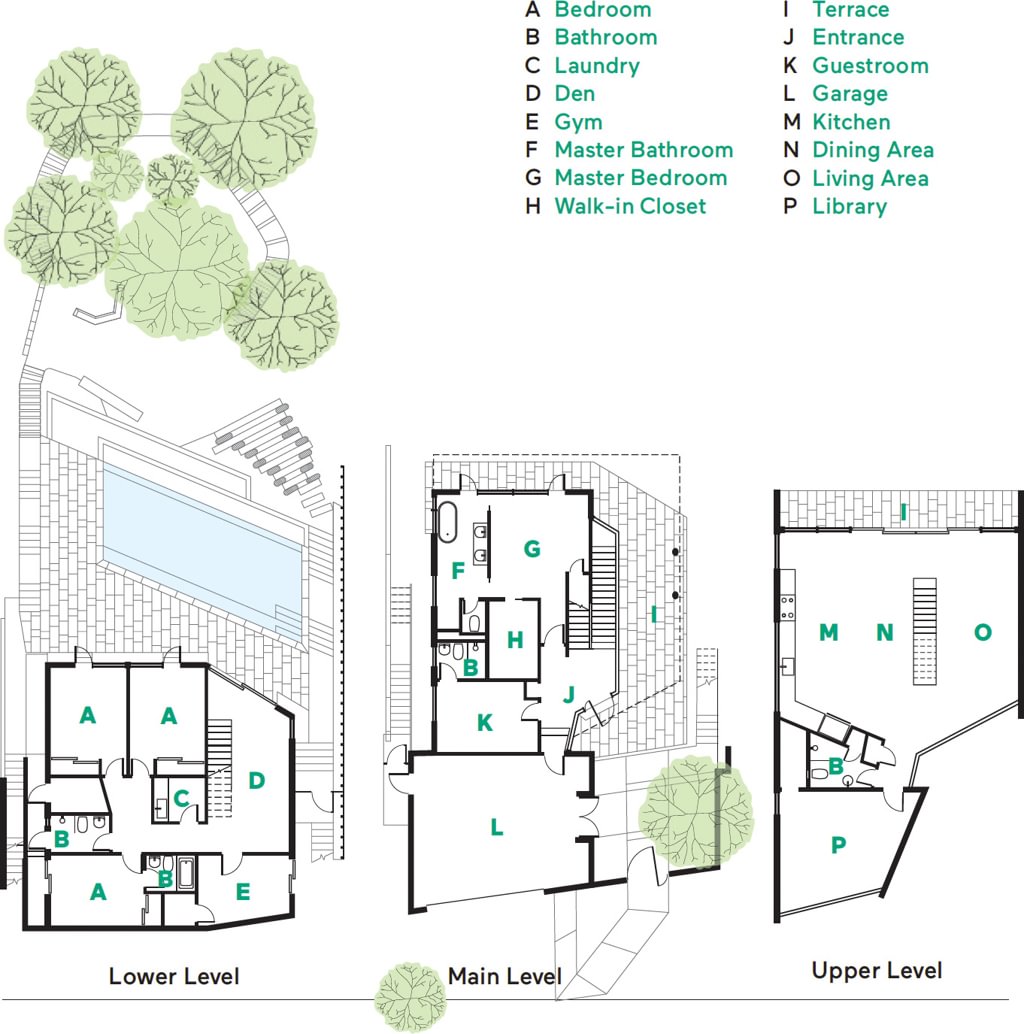