The author tests the CXO300 diesel V8 outboards on the St. Johns River—the first sea trial of this new technology conducted by a U.S. magazine.

Diesel outboards have ghosted the periphery of the marine scene for ages. In fact, the first one built in the U.S. that I know of (the 9.25-hp opposed-piston, two-stroke Amarc 10) debuted way back in the early 60s. But hey, when I recently told my buddies at my marina about sea trialing a sleek new Intrepid 345 Nomad with two, prototype 300-hp Cox diesel outboards on her transom, just about everybody got immediately dazed and confused. “You what?” went the typical response, followed by, “Diesels? Outboards? Really? What kinda horsepower? Lotta smoke? Slow? Fuel economy? Torque?”

I shouldn’t have been surprised by all this, I guess. At press time, the 300-hp CXO300 diesel V8 from Great Britain’s Cox Powertrain hadn’t enjoyed a whole heck of a lot of mainstream publicity—and certainly there’d been no publicized sea trials, at least on this side of the pond. Which is kinda odd, when you think about it, given that a prototype made an appearance at the 2018 Ft. Lauderdale International Boat Show and the first run of fully found, whoppingly powerful production engines is likely to cause a stir this year, if in fact it hits the market as predicted. After all, over the decades, the development of a practical, powerful, diesel outboard has held significant appeal for lots of boaters, from sportfishing long-rangers to owners of large diesel-powered yachts (who are often forced to lug around gasoline for their tenders) to commercial fishermen and military operators.

Unfortunately, I had to answer all the questions I got hammered with in a rather provisional way. The Intrepid Nomad I sea trialed on the St. Johns River, just north of St. Augustine, was a “test platform,” not a ready-for-prime-time sportster. Among other things, her twin CXO300s were governed to turn just 3600 rpm, some 400 revs short of the 4000 rpm the production engines are expected to turn. Continuing lube-oil-related and other mechanical tweaks were responsible for the limitation, according to Rick Chapman of Ring Power, Cox’s Florida distributor.

Still, what I discovered from my sea trial—the first one to be conducted by a U.S. magazine—was pretty informative. For starters, I detected absolutely no diesel smell and absolutely no black, gray or white smoke while both engines were running, whether at idle or at higher rpm. And then, during the speed runs, I discovered that our test boat was capable of generating some decidedly sporty performance numbers. More to the point, I recorded a two-way average top end of 38.2 knots at 3600 rpm on virtually flat water with a fuel burn of 30.3 gph. And at a more sedate cruising speed of 27.4 knots at 3000 rpm, I measured a fuel burn of 16.7 gph. Certainly, based on this data, the CXO300 seemed anything but slow and it also seemed considerably more fuel efficient than a 300-hp gasoline-fired powerplant, although determining by precisely how much would have, of course, required a head-to-head matchup. 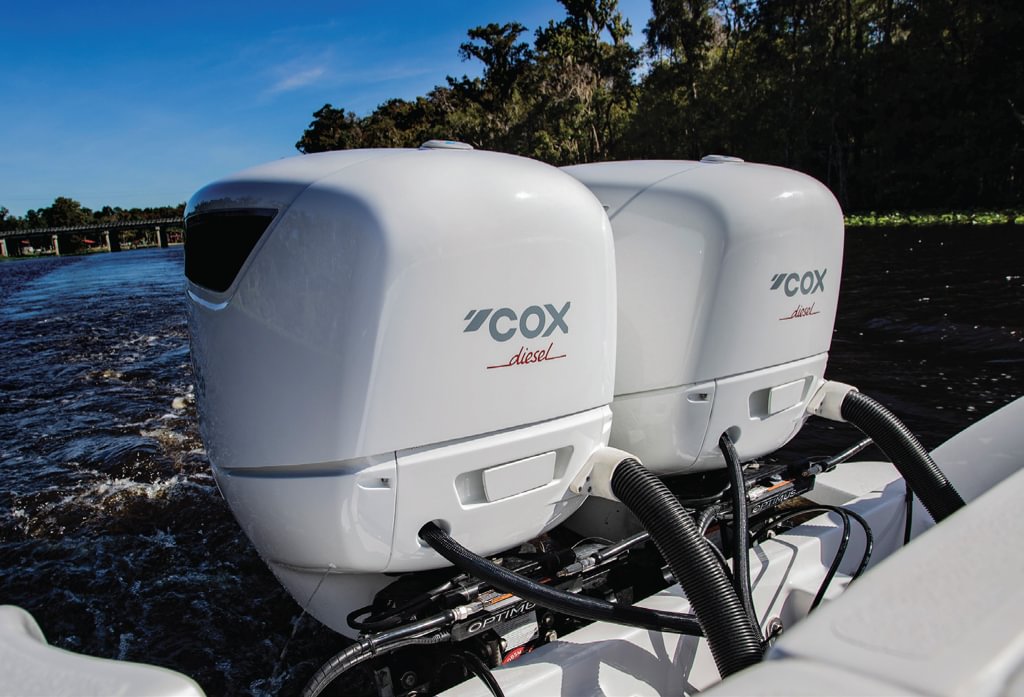 How about the noise levels and torque? At idle, I recorded 67 dB(A) at the helm and at WOT I got 87 dB(A). Broadly interpreted, I’d say this was a little louder than a four-stroke, 300-hp gasoline engine on the low end, but about the same (or maybe even somewhat quieter) at higher speeds. And to get a feeling for the kind of torque the CXO300 is capable of, I averaged eight separate time-to-plane trials and got 8.25 seconds, which was not bad considering that the Nomad, at a reported dry weight of 13,000 pounds (with engines), is a fairly heavy boat, and our 355-gallon fuel tank was nearly full at the time.

Chapman and I have agreed to sea trial a production version some time soon. But until then, about all I can tell anybody who asks is that the 300-hp CXO300 is clean as a whistle, quiet, comparatively fuel efficient and hey, without the Cox logo on the cowling, it’s possible the average Joe might forget he’s even dealing with diesel fuel at all. And oh, one final thing. Cox plans to sell the engine for $55,000, which is roughly twice the price of a gasoline-fired product. ■