IN THIS ISSUE
BAHAMA MAMA
With her easy, breezy approach to decorating—and life—Lulu de Kwiatkowski creates an artful home for her family in Lyford Cay
TEXT AND STYLING BY MIEKE TEN HAVE
PHOTOGRAPHY BY PERNILLE LOOF IN THE LIVING ROOM, A JULIAN OPIE PORTRAIT HANGS OVER THE HOME’S ORIGINAL MANTEL. CUSTOM SOFA BY DE KWIATKOWSKI

“Hunt and gather,” de Kwiatkowski says of her eclectic and colorful approach to decorating. You never think you’re going to live where you spent your childhood holidays, but there’s a luxury and surprise to it,” says artist Lulu de Kwiatkowski of Lyford Cay, the understatedly old-school private community in the Bahamas where both her current house and her childhood family home are situated. “I don’t remember growing up in New York City, but I remember growing up here.”

Her memory of that time is steeped in nature, exploration, and freedom. “It had an enormous impact on my upbringing, my inspiration, my primal existence. “We were feral—we basically lived in the water and trees,” she notes of life with her five older siblings.

Known for her riotously colorful fabrics and kaleidoscopic paintings of flora and fauna, de Kwiatkowski blends bohemian ease with sophisticated élan in both her work and personal life. And this disarming hybrid distinguishes the atmosphere of the breezy Bahamian home she now shares with her husband, Alfredo Gilardini, and their three towheaded sons (11-year-old twins Francesco and Matteo and nine-year-old Pier Giorgio).

That beloved childhood home, a low-slung oceanfront compound purchased in 1976 by her parents, Lynne and Henryk, the dashing but penniless Polish refugee turned World War II fighter pilot who went on to amass a fortune in business and become a revered figure on the horse-racing scene, served as an unwitting siren song, calling her back in 2016 to oversee repairs to damage caused by Hurricane Matthew. While there, on a lark, she and Gilardini looked at a house for sale just a short golf-cart ride away. Terrenia, as the home is called, was designed by architect Henry Melich around 1970 and, in spite of its rundown condition, still possessed great style, with a garden originally built by Russell Page and interiors by Alain Demachy. Charmed, de Kwiatkowski and Gilardini bought it almost immediately. THE SITTING ROOM’S WOOD PANELING AND MURALS ARE ORIGINAL TO THE HOUSE. IN THE ENTRANCE HALL, A JOHN RISLEY BENCH JOINS A CELERIE KEMBLE FOR SCHUMACHER WALL COVERING. 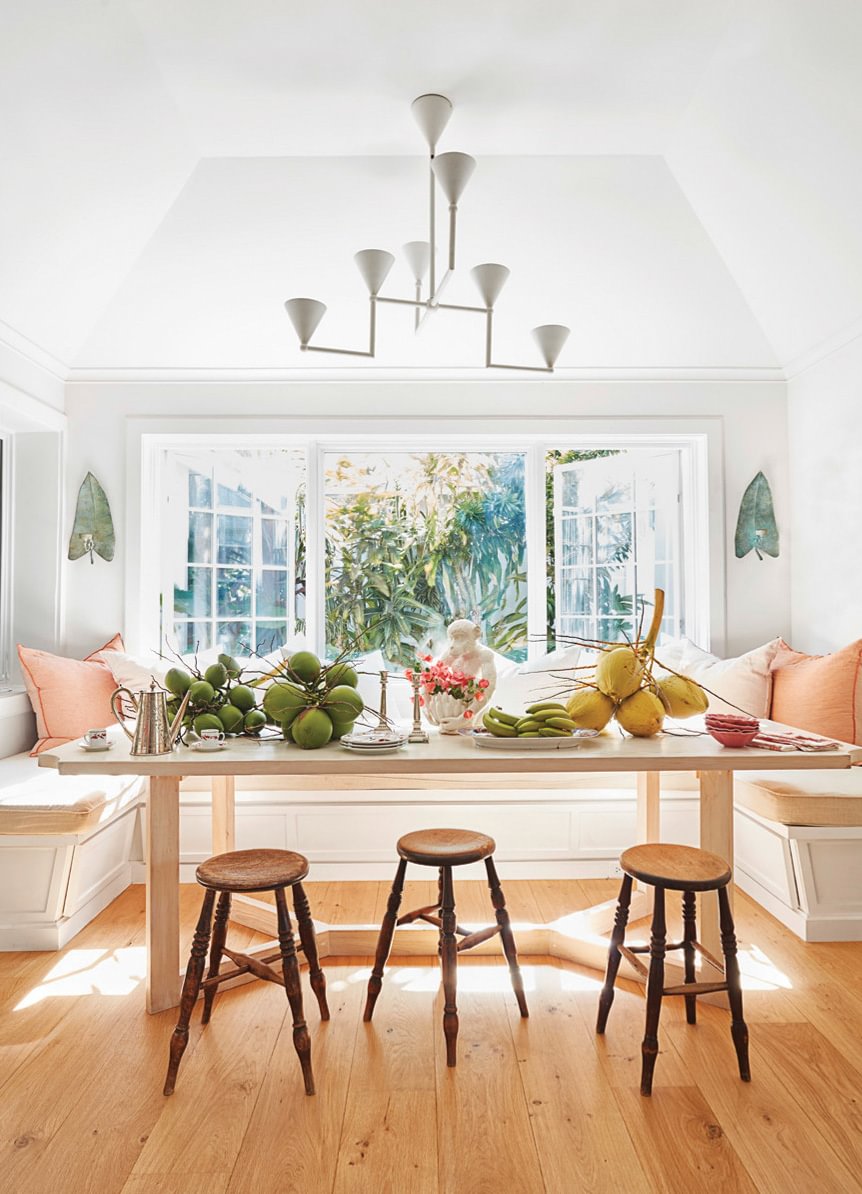 THE BOYS PLAY SOCCER ON THE BACK LAWN. IN THE MINI GUEST ROOM, THE OLY STUDIO DAYBED IS COVERED WITH AN ANTIQUE SUZANI FABRIC.

“We moved down here by accident,” reflects de Kwiatkowski, whose goal was to retain the house’s spirit while updating it for a family with three young boys. Along the way, she dispensed with some of the dated hallmarks, including stripping shellacked wood and raising the low-slung profile. “My husband’s head nearly hit the ceilings,” she notes. “We opened everything up, while keeping the shapes and frames.”

From the front porch, on which de Kwiatkowski painstakingly created a shell collage reminiscent of an Indian botanical, the house slowly unfurls. Indeed, part of its charm lies in the gradual reveal of its meandering volume. “We love the element of surprise—like, where’s the secret chamber?” she says.

Inside, the modern and antique, precious and irreverent mingle at every turn. The jewel of the grass-cloth-swathed foyer is a large Slim Aarons photo of de Kwiatkowski’s mother in sun hat and tennis whites at the Lyford Cay Club’s courts that hangs above a marble-topped Biedermeier chest. Next to it, a basket bulging with well-used rackets seems to be in dialogue with the photograph. On the opposite wall, an anthropomorphic wire bench by John Risley serves as a catchall for towels, backpacks, beach bags, and soccer balls. Reflecting on the color scheme, de Kwiatkowski notes: “It’s all about the greens and blues, recalling the nature and sea outside.” “Hunt and gather,” de Kwiatkowski says of her eclectic and colorful approach to decorating. This is evident in the generously sized living room, which features a ram’s-head-base coffee table scored on eBay in 2000, the pair of giant ceramic frogs found at a Paris flea market that flank the fireplace, and an expansive L-shaped sofa that has been with the family in three houses. Even the round Julian Opie portrait, so perfectly sited above the mantelpiece here, has been a feature of each home the couple has inhabited. In fact, the only piece de Kwiatkowski expressly commissioned for the room is a pair of hand-painted Gracie Waves wallpaper panels on the back wall.

An expansive, multipurpose white room with picture windows overlooking the veranda is the heart of Terrenia. It houses a book-lined, library-like corner with a big table and director’s chairs, a much-played piano, a backgammon and Ping-Pong table, and a sitting area. In the sitting area, crisp white upholstery contrasts cleanly with her sinuously shaped and vividly hued artwork hung in a grid, while the abstract foliage on a hand-painted screen mirrors the verdant palm fronds outside the picture window. Reflecting on the color scheme, de Kwiatkowski notes: “It’s all about the greens and blues, recalling the nature and sea outside.” THE MASTER BATH OFFERS A VIEW OF THE POOL. VINTAGE SIDE TABLE AND RUG; MATOUK TOWELS.

The room that probably best encapsulates de Kwiatkowski’s point of view is her studio. Pieces evoking a botanical garden of whimsical flora painted with her distinctively easy hand create an exuberant collage that unfolds across its walls.

When the boys come home from school, the house opens up and the barriers between indoors and out seemingly disappear. They head to the yard to play soccer and climb trees, eventually ending up in the pool. In a small vegetable garden, Gilardini proudly minds the tomatoes and basil he brought from Italy, while Cookie, their Jack Russell terrier, trails closely behind.

Before sunset, de Kwiatkowski ferries visitors in a golf cart for a tour of the chic Tom Scheerer–decorated clubhouse and one of the Club’s deceptively strong signature Rum Dum cocktails. It all feels so effortless, and de Kwiatkowski sums it up perfectly: “Being down here, where the heartbeat is the sun and there’s simplicity for the kids, is a really beautiful thing.” RH SOFAS FACE OFF ON THE VERANDA. CUSTOM TABLE BY DE KWIATKOWSKI; SIDE TABLES AND BASKET FROM ONE KINGS LANE.