Features
/ ENVIRONMENT
We are REVOLTING CHILDREN
…living in revolting times. As the schoolgates open up for another academic year, we talk to the eco-kids who are walking out of the classroom to protest about the perils of climate change
WORDS BY SARAH BARRATT A year is a long time when you’re a teenager. In August 2018, a 15-year-old with pigtails skipped school to sit outside the Swedish Parliament with a homemade sign declaring ‘School strike for climate’. Today, Greta Thunberg is a household name, unofficial leader of an international movement of more than a million schoolchildren, across more than 100 countries, who are determined to bunk off school in order to protest about the effects of climate change. Earlier this year, Greta was nominated for a Nobel Peace Prize and awarded an Amnesty International Ambassador of Conscience Award.

Generation Greta has taken the world by storm. On 15 March this year, the Global Climate Strike for Future saw an estimated 1.4 million children in at least 2,000 cities around the globe taking part, with the support of the world’s biggest environmental organisations. Since then, the movement Youth Strike 4 Climate has maintained momentum with near-monthly protests organised via its website, ukscn.org. It has also inspired the launch of a number of adult support organisations, such as Mothers Rise Up and UK Student Climate Network.

The movement – also known as Fridays for Future – first arrived in the UK on 15 February this year, with more than 10,000 children and young people walking out of school to join 60 different protests up and down the country. Dara McAnulty, a 15-year-old from Northern Ireland, is one of the leading young eco-campaigners. When he realised, aged 12, the scale of the environmental crisis we are facing (a recent UN report by the IPBES warned that one million species are threatened with imminent extinction), he began to campaign via social media, later taking to the streets. Dara, like Greta, has Asperger syndrome. “I experience sensory overload and anxiety, but nature miraculously helps me,” he says. His blog – youngfermanaghnaturalist.wordpress.com – came about so he could share his concerns with a larger audience. He now has a following of more than 17,000 and has also become an ambassador for #iwill, a campaign to inspire more social action among young people. “Through taking action, I continue to have hope,” he says. As part of this, he has spoken at Downing Street and St James’s Palace, and his first book, Diary of a Young Naturalist, comes out next year.

These are impressive accolades for someone not yet able to vote – but Dara is one of a wave of young people for whom ‘conscientious’ is the new ‘cool’. Bella Lack, 16, began campaigning for wildlife protection when she was 11, and is now a Youth Ambassador for the Born Free Foundation. Last year, her petition against the use of wild animals in UK circuses helped secure a government ban. Also taking on the policymakers is 14-year-old Felix Ottaway O’Mahony, an Extinction Rebellion (XR) member and one of a group of activists who met then-environment secretary Michael Gove earlier this year. “It was exhilarating to meet a leading politician, but also frustrating,” he said. “It was clear [to me] that he wasn’t willing to work for the necessary change to protect my generation’s future.” 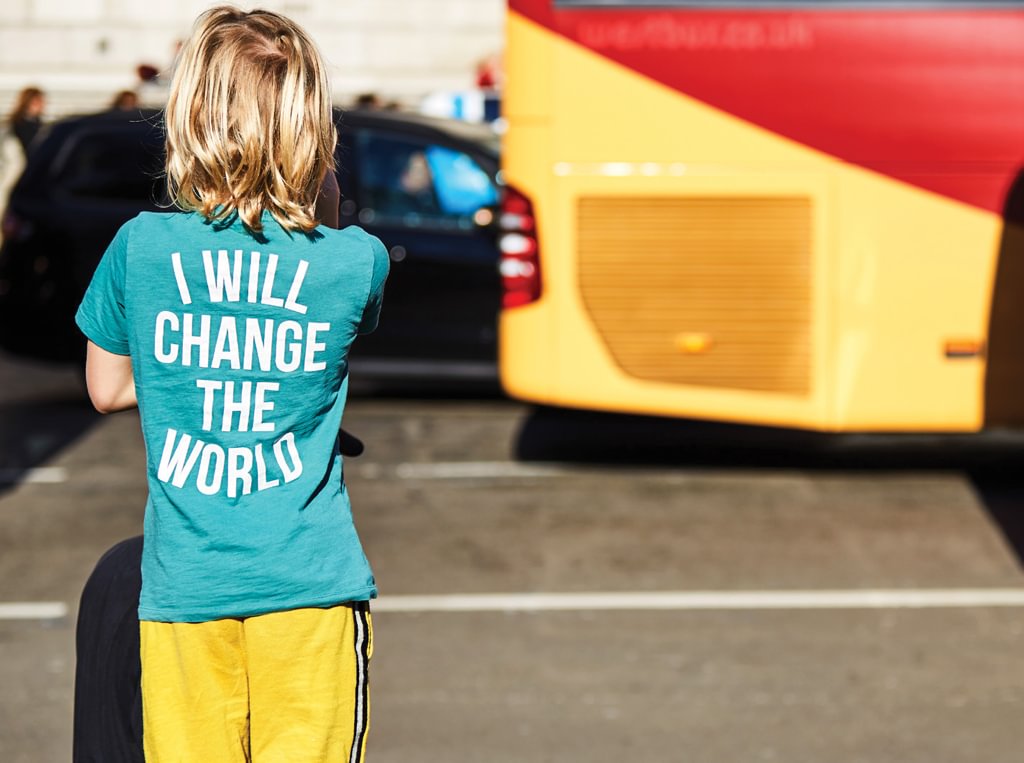 Of course, no one said it was easy to balance school work with saving the world. “I often do homework while travelling to a protest or sometimes when I’m sitting in the middle of a roadblock,” Felix says. “There’s no point in studying if I don’t have a future. Equally, if I spend all my time fighting for the future, and don’t get any qualifications, then I won’t be able to do the things I want to do with my life.” Both Dara and Bella took their GCSEs earlier this year. “There were lots of very late nights and early mornings,” Bella says.

Standing up to politicians is just one part of the battle plan: all these ardent adolescents have made sustainable changes to their lifestyles. Bella no longer eats animal products – and has persuaded her family to make more considered choices. They are also now vigilant about checking labels for unsustainable palm oil and cutting plastic use. Bella offsets her carbon emissions and will now only fly when the “outcome is proportionally beneficial” – for instance, when she went to shoot a recent documentary on palm oil in Borneo.

Flying for #iwill work also weighs on Dara, but he is pragmatic about what’s achievable, as is Felix: “I do what I can while accepting that I’m living within the constraints of family and student life. I’m vegetarian, trying to go vegan. I walk or cycle everywhere and get the bus when I can’t.” His family own a car but use it only when there is no other option – it’s travelled just 150 miles this year. “We’re not perfect. We occasionally buy fast-fashion and fly. But it’s not about a few people being completely ethical or carbon neutral; it’s about millions of people doing their best to be as ethical and carbon neutral as possible.” 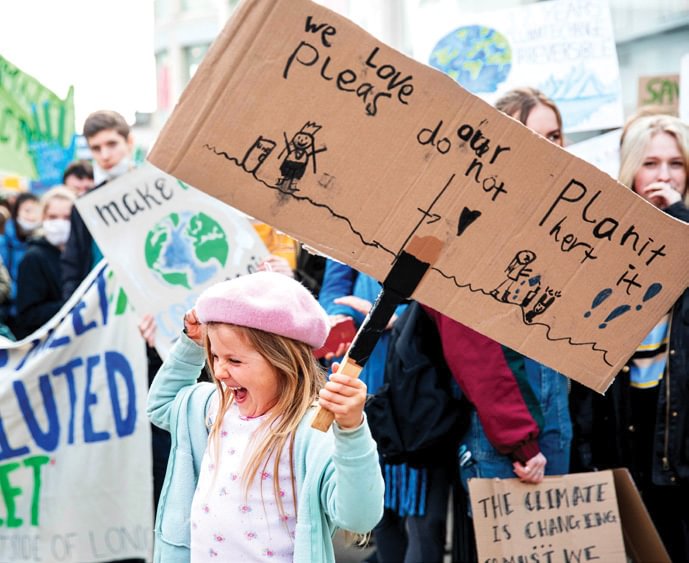 And it’s the little – and local – things done regularly en-masse that can make big differences. Beach cleans, citizen science and tree planting – as well as sustainable lifestyle changes such as using reusable water bottles or buying secondhand clothing – are all gaining in popularity with young environmentalists. In Norfolk, history teacher Matt Willer turned an abandoned playing field into a school allotment with the help of hundreds of young volunteers, who now devote their spare time to growing organic produce. “I worry that children will lose their connection with nature because of technology,” he says. “This place reminds them we are part of nature and that working with it can achieve beautiful results.”

But not all teachers think the same way. Although there’s no doubt the movement has got the world’s attention, it has received mixed reactions among the grown-ups, from glowing support to outright condemnation from those who see it simply as truancy. Geoff Barton, general secretary of the Association of School and College Leaders (ASCL), said: “Responsibility for the safety of young people had to take precedence over any sympathy or otherwise for their cause.” Similarly, Theresa May, who was prime minister during the initial rise of the movement, has said, “Disruption wastes lesson time… crucial for young people precisely so that they can develop… and help tackle this problem.” Meanwhile, Jeremy Corbyn, leader of the opposition, and the leaders of other UK political parties all voiced their support for the protests, with then-energy minister Claire Perry saying that she would have joined the strikes in her younger days. 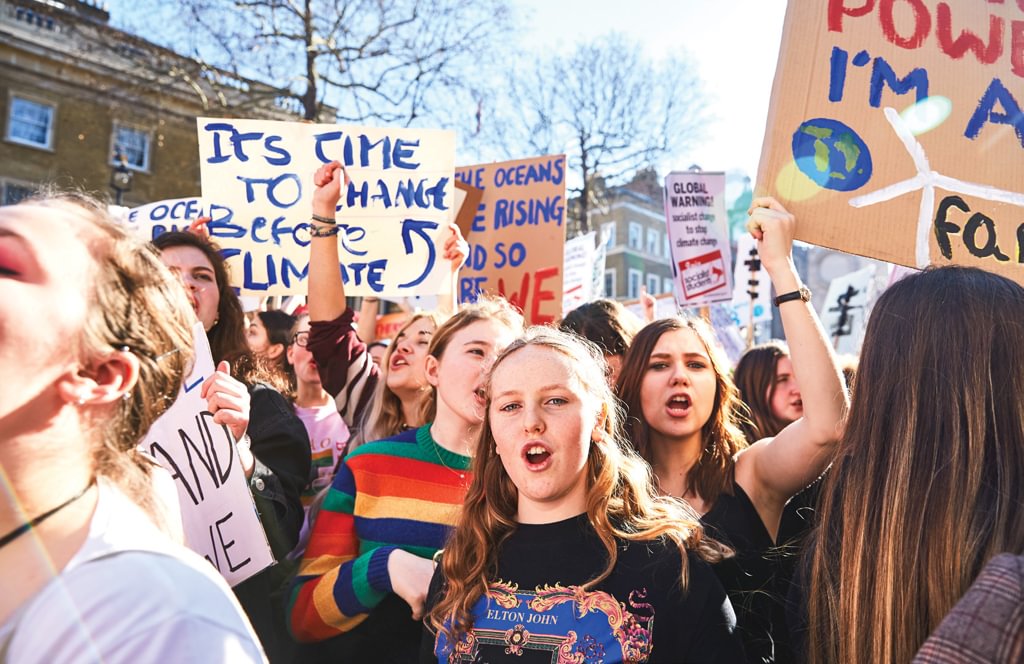 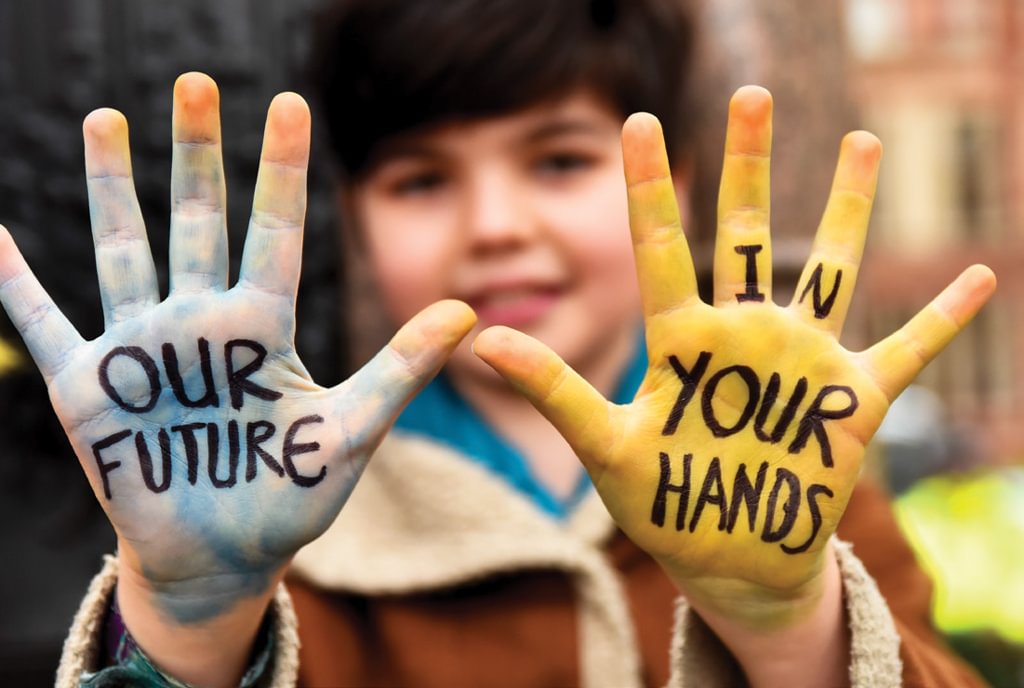 Whether you approve or not, it seems the protestors are getting policy makers to listen up. On 21 February, the president of the European Commission, Jean-Claude Juncker, announced (while sharing a platform with Greta Thunberg) his intent to spend hundreds of billions of euros on climate-change mitigation – a quarter of the EU budget. On 15 March 2019 the UN Secretary-General António Guterres expressed his support, admitting that, “My generation has failed to respond properly to climate change. No wonder young people are angry.” He then invited world leaders to a climate action summit in September with “concrete realistic plans to enhance their nationally determined contributions by 2020”. Finally, in May 2019, during a European Union summit in Sibiu, representatives of Youth Strike 4 Climate met with national leaders to hand them an open letter, signed by more than 16,000 European climate strikers and their sympathisers.

All this makes one thing very clear. The youth have found their voice and they’re not going to pipe down any time soon.

HAVE YOUR SAY What do you think about the school strikes? Let us know your thoughts at countryliving.com/uk/revolt where you will also find more from Bella, Dara and Felix.

“I’m nine years old and in year four at school. I first found out about everything going on in the world through my National Geographic magazine, then heard about Greta Thunberg’s school strike. Now I’ve been on lots of school strikes. My school, in Islington, talks about the strikes a lot: they want climate change to stop but they don’t want us to go on strike. We’ve had assemblies about the climate crisis – but I think teachers could talk about it more. I sent a letter to my head teacher, which I ended up reading out to Extinction Rebellion during a protest. One of my teachers told us she was really proud of us for taking part. Everyone is angry about what Donald Trump says about climate change not being real. Reducing carbon emissions to zero by 2050 is too far away. By then, it will be too late.”

“My daughter Bella is a youth ambassador for the Born Free Foundation and her activism has opened all our eyes. She puts continual pressure on us to be mindful of the decisions we make every day. We’ve always recycled and reused shopping bags, but I’ve learned so much more from her [about living sustainably]. The strikes that took place during her GCSEs this summer weren’t ideally timed; however, Bella’s argument is always ‘What is the point of having lots of qualifications, but no planet?’”

“All humans have to live with climate change, but this issue will affect the young more than anyone. I’m an education specialist, based in Hertfordshire, working with the UN to develop a Climate Change Specialist Teacher course. Pupils are asking to know more because it is worrying them. We want to give educators the confidence to teach such an important topic – and to see a climate change teacher in every school. Solutions start with schoolchildren and teachers. If you consider what one child has done to focus the minds of policymakers, imagine what millions could do.”

“I’m a secondary-school teacher in Greenwich and set up a campaign group specifically for educators. There are 150 of us and we have organised protests to highlight that climate change is only mentioned briefly within the curriculum. A student could do 10,000 hours of lesson time and only hear climate change mentioned in ten of them. My head teacher was initially concerned about the strikes, but decided not to sanction students who had made a clear case for striking. Teacher or not, I feel it’s my moral responsibility to be talking about climate change.”

HOW TO TACKLE CLIMATE CHANGE WITH KIDS

TAKE A LEAF out of Dara’s book and encourage your children to make an #iwill pledge. See iwill.org.uk.

START A CLUB Tackling an issue alone can feel overwhelming – setting up a school eco-group will help kids to build up support groups and feel less alone.

FOCUS ON ONE ISSUE Start by doing something simple, so as not to feel overwhelmed. Encourage your child to pen a postcard to an MP or help you ‘re-wild’ a patch of garden.

BUY MAGAZINES such as National Geographic or The Week Junior. They’re full of topical stories about environmental issues, many written in a very accessible way.

VISIT WEBSITES such as wwf.org.uk or wildlifetrusts.org, where you’ll find lots of easy activities designed to encourage kids to get outside and learn about sustainability. ■