departments
/ backstory
Northwest Passage
A designer takes on the mantle of one of Washington’s most noted architects with a reverent renovation.
TEXT BY Brian Libby
PHOTOS BY | @BENJAMINRAS Benjamin Rasmussen “I’ve loved Moritz Kundig’s work for years,” says designer Josh Hissong, whose home in Spokane, Washington, turned out to be a 1971 work by the architect. Josh and his wife, Shiva, executed a thoughtful revamp of the house, which began with thinning an overgrown stand of pine trees to bring the entryway out of hiding. The exterior is painted Deep Space by Benjamin Moore.

Designer Josh Hissong had been looking for a lot in Spokane, Washington, where he could build a home for himself, his wife, Shiva, and their new baby when one of his employees sent him a text with instructions: “Click on this link and buy this house.” The 1971 post-and-beam structure had fallen into disrepair, and the yard was, as Josh recalls, “a mess.” But the couple loved its modernist lines and quickly made an offer.

Though they tried to discover the home’s provenance, they didn’t find out until several months after they’d begun renovations that the designer was Moritz Kundig, one of the city’s leading midcentury architects. By coincidence, Josh’s firm, HDG Architecture, had been hired to oversee the expansion of a Unitarian church whose original building was also designed by Kundig, with the elder architect as a client.

A native of Switzerland who arrived in Spokane in 1955 by way of California, Kundig was running his own small firm by the early 1960s, designing mostly houses. But by 1971, he had shifted to a succession of public and commercial projects, leading Josh to believe his house was built too late to be the work of the well-known architect. However, it turned out Kundig had kept his toe in residential design. 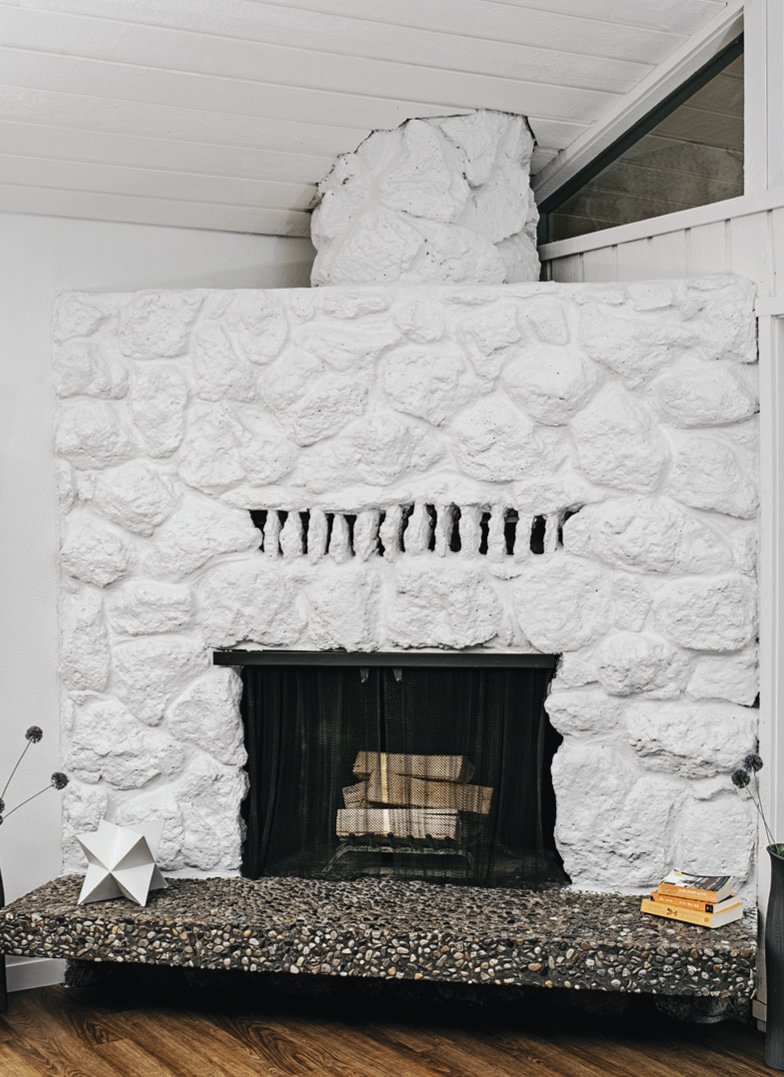 When Josh learned from a neighbor who the designer was, he invited Kundig over to celebrate the discovery and discuss the renovation. The architect approved of the end result. “I think Josh did a good job of remodeling inside,” the 94-year-old says. “It’s more up to date and there’s more openness. He did the right thing. He didn’t really damage the house, as so many people do to similar structures.”

The home’s entrance, newly visible thanks to a modest thinning of what had been a small forest of pine trees, is reached via a path sheltered by the garage’s overhanging roof. Inside, a vaulted cedar ceiling—more than 12 feet high at the top of the ridge beam—creates a wide-open great room, with a fireplace made of lava rock adding texture. Both have been painted white, helping to bounce light around the space. Originally closed off, the kitchen is now part of this room. It features a wall of cabinetry produced by Josh’s design-build company. And with a toddler roaming around, Josh and Shiva chose to replace the wall-to-wall carpeting with luxury vinyl plank flooring for its durability and sound-absorbing qualities. 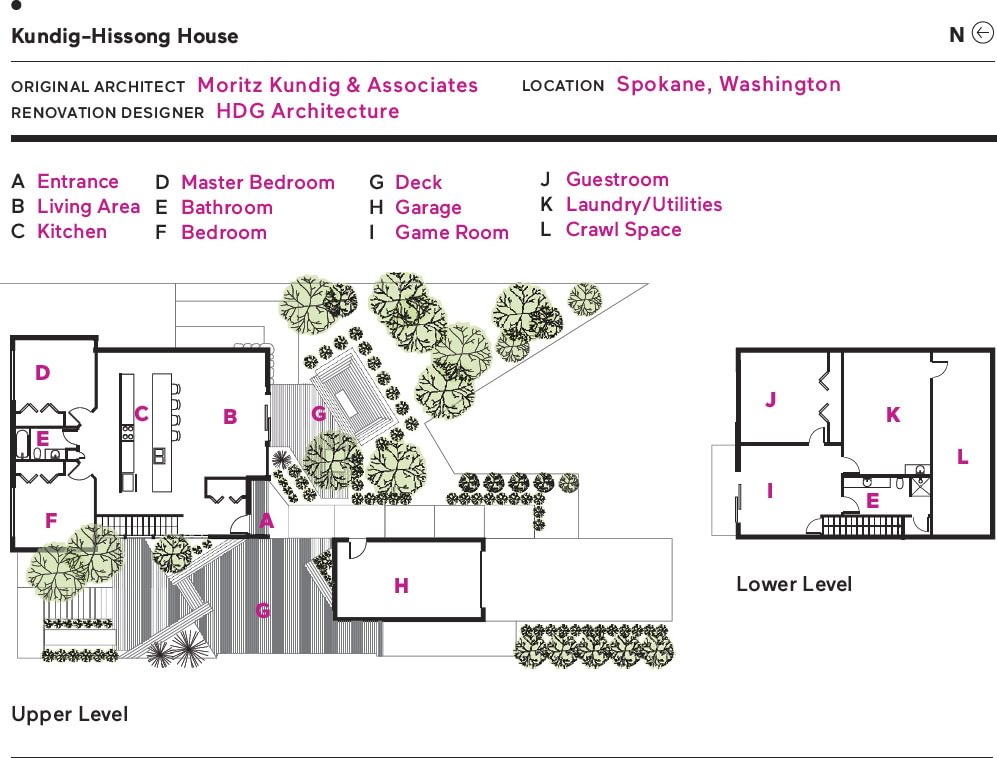 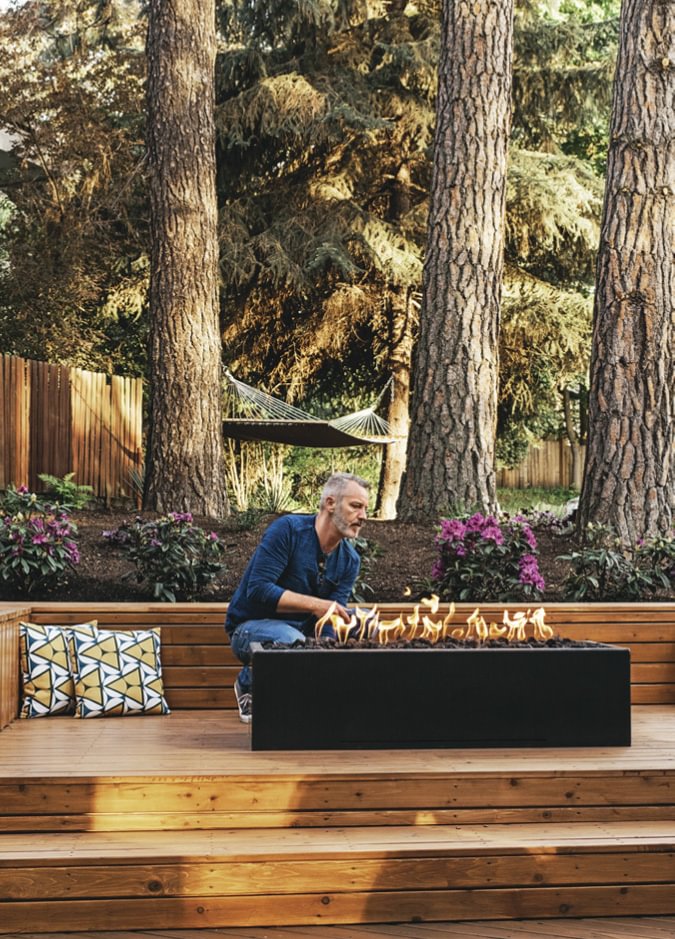 Blend Outdoor Design in Spokane oversaw the updated landscaping as well as the design of a new deck and fire feature.

“Moritz was elated to find out we hadn’t built a McMansion or tacked on an irrelevant addition.”
JOSH HISSONG, DESIGNER AND RESIDENT

But Josh took care to retain what he could, from the glazing and hardware—save for a new door handle—to the slate floor in the entry, the globe lights, the louvered bifold closet doors, even the old green carpet in the closets. Dropped ceilings were removed in the bedrooms to reveal intact vaulted ceilings that transformed each room into a loft-like space and allowed for a mini-library in the master bedroom.

With massive sliding doors and large clerestory windows that angle to the top of the pitched ceiling, the 1,200-squarefoot main floor feels more spacious than it is. The living room spills onto a small deck, enhancing the emphasis on indoor/outdoor living at this quintessentially Northwest-modern house.

Though Josh downplays the significance of his renovation compared to the original design, he clearly takes pride in bringing the house back to life. “The neighbors said the blinds in the living room hadn’t been open for decades,” he says. “I love how the place works for my family and me, but restoring its connection to this incredible architect—that’s what makes the story great.”

Tom Kundig agrees. “You put your heart and soul into a house, and you just hope the person who picks it up appreciates and enjoys it,” he says. “It doesn’t mean it isn’t open for updates and modifications, but if it’s done with a certain spirit and enthusiasm and talent, you can take something that once was wonderful and make it wonderful again.” ■