THE BRIEF
/ ASIA
When Red Is Unlucky
China’s apps for tracking the outbreak are both efficient, and worrying.
BY NAOMI XU ELEGANT & CLAY CHANDLER 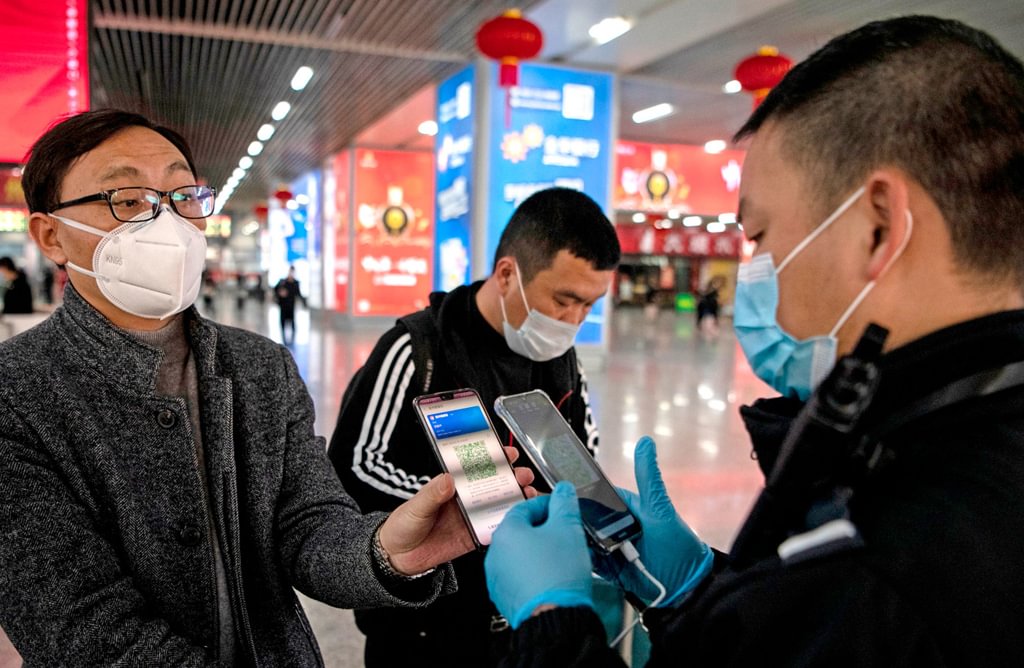 THE PHYSICAL BARRIERS of the largest lockdown in human history started coming down in Wuhan, China, on April 8. By the time shops opened, and some of the city’s 11 million residents ventured out, authorities had introduced a more modern method for isolating those at risk of infection. At checkpoints throughout the city, police and security guards demanded residents present a QR code on their mobile phones that rates the user’s coronavirus risk level. Green codes granted unrestricted movement. A yellow code required seven days of quarantine. Red meant 14 days of quarantine.

Local governments created the algorithms behind the ratings at the behest of China’s State Council and rolled them out in Wuhan and hundreds of other cities on apps hosted by China’s largest tech companies, Alibaba, Tencent, and Baidu. To receive a rating, users download an app embedded in one of the three ubiquitous mobile payment platforms and register with basic information—name, national identity card number, phone number, address. Subsequent questions are more invasive, quizzing users on health status, travel history, and asking them to identify any close contacts diagnosed with the virus.

Technology’s deep foothold in Chinese society fast-tracked the rollout. More than 60% of China’s population, or 850 million people, own smartphones and depend on them for a wide range of daily activities. Local governments all but mandated app usage by making it a prerequisite for moving about. By mid-April, Alibaba was hosting apps for more than 200 cities and Tencent had over 300. Baidu didn’t say how many local apps it is hosting.

Another reason the apps garnered wide adoption is that they seem to work. But that efficiency comes with tradeoffs. The apps’ opaque algorithms run on sensitive information, and users’ freedom of movement is dictated by its pocket-size traffic light. Even as Chinese cities reopen, residents unable to show a green badge are denied entry to businesses, public areas, and transit systems. The apps concern human rights advocates, who fear they’ll transform smartphones into an ever more powerful tool for China’s authoritarian government to spy on its own citizens.

“Technology can play a role in containing the pandemic,” says Doriane Lau, a China researcher at Amnesty International, but “an increase in state digital surveillance powers can threaten people’s privacy and freedom of expression, especially in places where these rights and freedoms are not well-protected by law.”

In China, the apps’ color codes have become a way of life, one that—at the very least—has given users a ticket out of lockdown.

Cathy Fu, a tech worker in Beijing, got stuck in Wuhan’s Hubei province for two months. She received her first green QR code on March 10. “I was so happy,” Fu said. She gladly flashed it weeks later as she finally boarded a train back to her home in Beijing. ■