The main square of Kraków’s Old Town. On the left, eight centuries of history coalesce in St Mary’s Church, with its famous high altar by Veit Stoss and star-spangled murals by Jan Matejko. In the centre is the medieval Cloth Hall.

If lost in Warsaw, look out for the Palace of Culture and Science. Visible from everywhere in the city, this Socialist-realist skyscraper will remind you where you are, not only in space but also in time. That’s because Warsaw’s tallest building (237 metres) is possibly the least Polish in character. Built in 1955 as a ‘gift of the Soviet people for the Poles’, it symbolises everything Poland would like to forget. Nevertheless, it’s part of history. Many frequent its theatres, cinema, museums and pubs; an observation deck at 114 metres provides an impressive panorama of the city.

The boulevards around the Palace of Culture are broad and lined with fashionable boutiques. Leaves swirl in spaces between old apartment blocks, where grandmothers tend children in communal gardens. Small shops and eateries ply their trade in empty lots. Sushi restaurants are in vogue. A beauty salon declares ‘Time For Wax’. A man walks past with two ring-tailed coatimundis (racoons) on a leash. The Złote Tarasy (Golden Dome) shopping centre, with its wavy glass roof, offers every modern convenience. From a distance, depending on the wind, comes the thud of incessant construction. Despite all this activity, the city centre feels curiously empty.

By contrast, the Unesco-listed Old Town, overlooking the left bank of the Vistula River, teems with tourists. Here you can eat authentic Polish food, ride a horse and cart around the cobbled squares, and admire the many historic buildings such as the Royal Castle, St John’s Archcathedral, and Marie Curie’s house – all of which were completely rebuilt from old photographs and archival documents after the city’s near-total destruction during the Warsaw Uprising of 1944. This melancholy reality, concealed behind the facades of the old-new buildings, permeates the city like music. Perhaps that’s why, of the myriad museums and monuments in the Old Town and along the Royal Route stretching south from Castle Square, I found the Museum of Warsaw in Old Town Market Square the most moving: an anthology of fragments, recordings and photographs generating endless remixes of the past.

Recapitulating history in a different way, the Royal Łazienki Park occupies 76 hectares of the city centre south of the Old Town. The entrance on Ujazdów Avenue gives onto a graceful monument to Fryderyk Chopin – composer, pianist, symbol of Poland. In summer, crowds attend free Chopin recitals. Deeper into the park, ornate neo-classical temples, towers, pavilions and palaces materialise among the majestic trees. Of these, the most important is Pałac Na Wyspie (Palace on the Isle), a graceful, classical lakeside edifice converted from a bathhouse by Stanisław II Augustus, last monarch of the Polish-Lithuanian Commonwealth (1569-1795). The palace houses his personal collection of paintings, as well as sculptures and murals epitomising the precepts of the cultural renaissance he hoped to direct. Although Poland was devoured by Russia, Prussia and Austria-Hungary under Stanisław’s watch, the artworks and the palace remain.

Łazienki Park hosts diverse events year-round. We caught Dzień Koni (Day of the Horse) – a wondrous display of horsemanship, equestrian ballet and carriage driving. The pièce de résistance: a demonstration by four Polish lancers of the correct use of sabre and lance by lopping and skewering apples and roses at a gallop.

But Warsaw also loves to party. All the big music stars tour the city. Hedonism spills onto the pavements of fashionable Nowy Świat Street from dozens of bars, where Polish vodka is served for as little as R8 a shot. On the right bank of the Vistula, the up-and-coming Praga district has a more Bohemian atmosphere, with restaurant-bars like W Oparach Absurdu (In the Fumes of the Absurd) and Po Drugiej Stronie (The Other Side) offering all the ingredients for a memorable night out.

Warsaw consistently ranks in the world’s top 10 vegan-friendly cities, with 50 vegan restaurants in a seven-kilometre radius. The vegan burger franchise Krowarzywa has twice been awarded ‘Best Burger in Warsaw’. 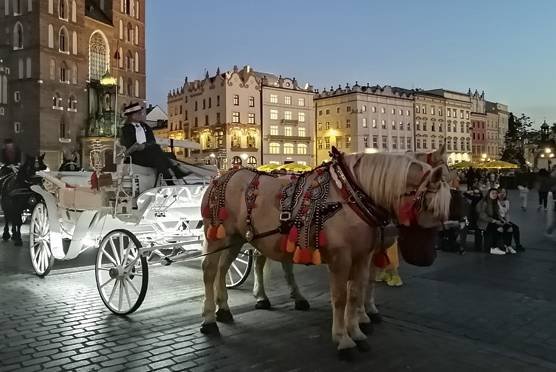 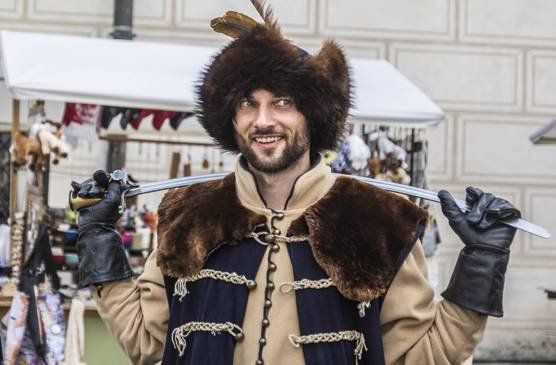 this Poznań tour guide wears the costume of the szlachta or petty nobility. 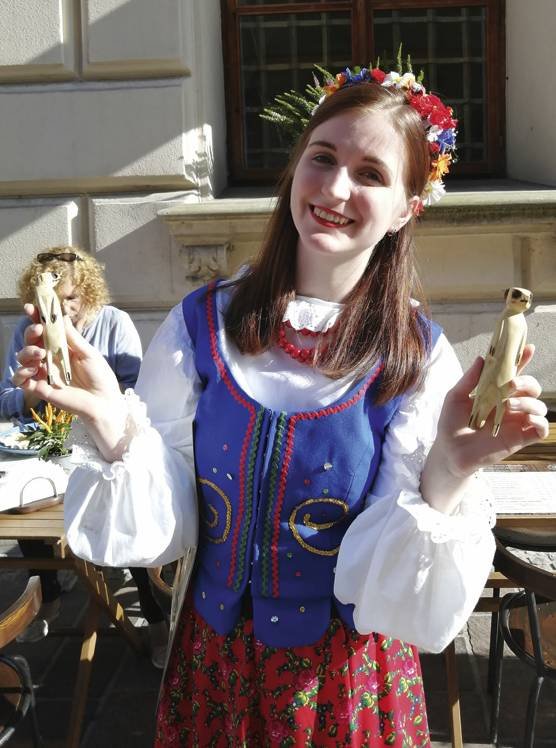 a Kraków singer in regional dress

Three hours by bus west of Warsaw, Poznań, capital of Wielkopolska (Greater Poland Province), is one of the nation’s oldest cities. The bones of the first kings repose in the crypt of its 10th-century cathedral. Poznań also hosts tens of thousands of students, making for a palpably upbeat atmosphere. The citizens here have a distinctly different attitude to the perennial theme of Polish independence. 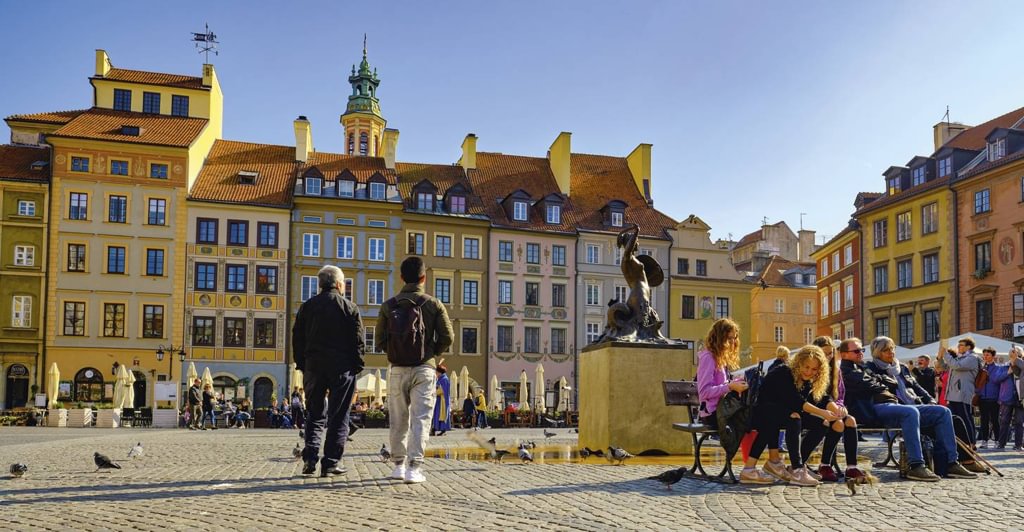 Locals relaxing near the legendary Syrenka Warszawska (Warsaw Mermaid) in the Old Town.

‘The celebrated Greater Polish uprising of 27 December 1918 is one of only three victorious struggles for independence in Polish history and stands in stark contrast to the more famous, but failed, Warsaw Uprising of 1944,’ explained tour-guide Piotr Oźmina during our interactive, theatrical Poznań Feast Tour. After taking in the award-winning Stary Browar (Old Brewery) centre, with its cleverly combined retail and art spaces, we learnt about regional food and drink (including a tasting of the unique Grodziskie beer or ‘Polish champagne’) in historical establishments such as the Renaissance-era Hotel Kolegiacki. Finally, we were treated to Poznań’s iconic rogal świętomarciński (St Martin’s croissant) at the former Jesuits College, a splendidly Gothic old monastery

When in Poznań, don’t miss the Old Market Square, where mechanical goats emerge from the old town-hall tower and butt heads 12 times to mark the passage of noon, and the Parish Church, whose breathtaking interiors are crammed with monumental altars.

Events are held in the warmer months at Poznań’s Old Market Square, established on the left bank of the Warta River in 1253 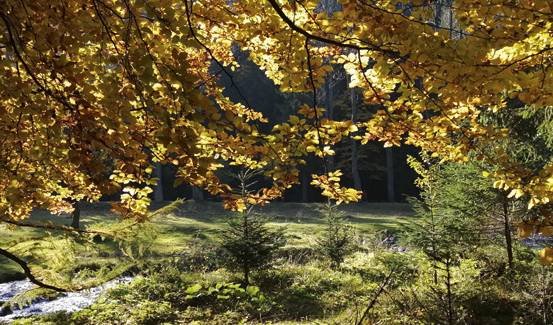 autumn in the Tatra Mountains.

“Kraków appears to have been imported wholesale from a fairy tale”

En route back to Warsaw, our whistle-stop tour of Toruń, birthplace of Nicolaus Copernicus, included the Gingerbread Museum, housed in a 19th-century factory owned by the Kopernik gingerbread company. Nearby, the ruins of a riverside castle built by the detested Teutonic Order reflect another facet of Poland’s complicated history.

Three hours by train from Warsaw, Kraków appears to have been imported wholesale from a fairy tale. The entire Old Town is a Unesco Heritage Site centred around Rynek Główny (Main Square), with its medieval Cloth Hall (now an eclectic bazaar), white-horse Cinderella carriages and St Mary’s Basilica. A five-note bugal call from the church’s topmost tower is a reminder of the legendary trumpeter whose warning of a Mongol invasion was cut short by an arrow.

Around Rynek Główny, countless restaurants serve up fine Polish and international cuisine. Alternatively, snack on the delicacies at the lively market in nearby Mały Rynek (Small Square) and watch a working blacksmith forge a souvenir before your eyes. The square frequently hosts free live concerts of anything from folk music to klezmer and jazz – a foretaste of the musical cornucopia that is Kraków. Opera, classical, jazz, black metal – you name it, Kraków’s got it. We caught Hildur Guðnadóttir’s ‘Chernobyl’, a stupefying performance in which sound, lighting and smoke seemingly transformed an abandoned telecommunications building into a nuclear reactor.

A stream bisects the bustling shopping precinct along Krupówki Street in Zakopane.

Close to the Old Town, the fortified complex of Wawel Hill comprises the royal castle and cathedral where Poland’s kings were crowned. One cannot but be moved by the tombs of national heroes such as Tadeusz Kościuszko; as well as the great Bell of Sigismund Tower (cast in 1520, it weighs 13 tons and requires 12 bell-ringers to swing it).

Take the stairs down through the Dragon’s Den and exit Wawel Hill onto the west bank of the Vistula, where the statue of the legendary Smok Wawelski, the Wawel Dragon, breathes flames into the sky. From there, a pleasant stroll along the riverbank leads to Kazimierz, Kraków’s second heart.

Founded by Casimir the Great, for centuries it was the Jewish Quarter until the Holocaust. Today, Kazimierz is a dilapidated, hipster-friendly zone with all the vinyl, art, clothes and coffee you could desire – not to mention zapiekanka, the trademark open sandwich best enjoyed fresh from the market on Plac Nowy (New Square). Synagogues and the cemetery attest to the Jewish legacy, while a cultural revival is under way at the Jewish Community Centre of Kraków, two kilometres from Oskar Schindler’s famous factory.

Attractions outside the city are easily accessible by public transport. The Wieliczka Salt Mine experience is a mind-altering descent 300 metres underground into a complex of shafts and tunnels, complete with an entire chapel dug from one massive block of salt. To the west of Kraków, Las Wolski (Wolski Forest) comprises more than 400 hectares of majestic trees and whispering foliage where wild boar roam and edible mushrooms are there for the picking. The artificial Piłsudski’s Mound affords a panoramic view of the forest and surrounds.

I could have spent much longer in Zakopane. Three hours by bus due south of Kraków, at the foot of the Tatra Mountains (home to wolf, bear, mountain chamois and golden eagle), this picturesque town is busiest during ‘December madness’, when holidaymakers flock to the ski slopes. The ‘Polish Alps’ are perfect for beginners and cheaper than elsewhere in Europe. However, Zakopane is magnificent year-round. Simply walking the streets is a delight, thanks to the ubiquitous ‘Zakopane style’ of quaint folk architecture, epitomised by the iconic Chapel of the Sacred Heart of Jesus in Jaszczurówka.

Signs at the entrance to the national park on Jaszczurówka Street caution against dallying with bears. There are lovely trails here, from a 90-minute loop through the forest to a six-hour hike. Exploring, I came upon deep, powerful rivers and slopes banked with trees in full autumn regalia. The map omitted to show that my route went over Nosal (The Nose), Zakopane’s most popular mountain because it’s the most accessible, but at 1206 metres, a mountain nonetheless. The surprise climb proved worthwhile, yielding at every turn vistas of the town, surrounding valleys and peaks drenched in vibrant reds and golds.

Mountain hikes work up an appetite. Back in Zakopane, if you stop at a traditional karczma (inn), expect humungous portions – a single potato pancake filled with goulash will defeat two famished adults. The local speciality is oszczypek – smoked, salted ewe’smilk cheese – which, along with a staggering variety of other goods, from curios to high-quality woollen garments, can be bought at the stalls lining Krupówki Street, a bustling thoroughfare plied by horse-drawn carriages (sleighs in winter). Across from Krupówki, an enormous market stretches to the entrance of the funicular to Gubałówka (1126 metres), from where a ski lift goes to Butorowy Wierch (1160 metres). For the intrepid, the four-day hike to Poland’s highest peak – Rysy (2499 metres) in the High Tatras – is best done in the company of a guide.

Coming to the end of my Polish journey, I felt I’d only scratched the surface of this ancient yet youthful country. The Poles, with their close connection to nature and passionate attachment to their culture and history, are a fascinating people, while every region and city – every precinct even – has its own particular traditions.

The natural world – mountains, forests, rivers and lakes – that cradles each city adds a wildness distinctly lacking from Poland’s more developed European neighbours. And the traveller feels perfectly safe at all times – a definite plus in a country where the language is so difficult. This, and its affordability, means that you can stay longer and take the time to delve more deeply into this captivating nation. 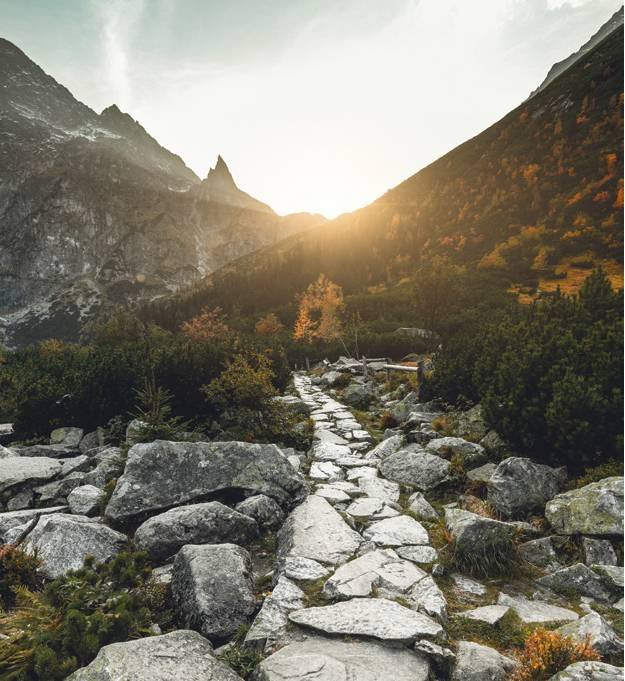 The High Tatras are part of Eastern Europe’s Carpathian mountain chain and create a natural border between Slovakia and Poland. It’s possible to walk across the frontier from Zakopane in three days.