STAY-WELL STRATEGIES
/ Sleep Better
Sick and Tired?
… of not being able to sleep soundly? Many Americans are using supplements, alcohol, and medications that not only don’t work well but also may be making them ill. Learn what’s safe and effective. 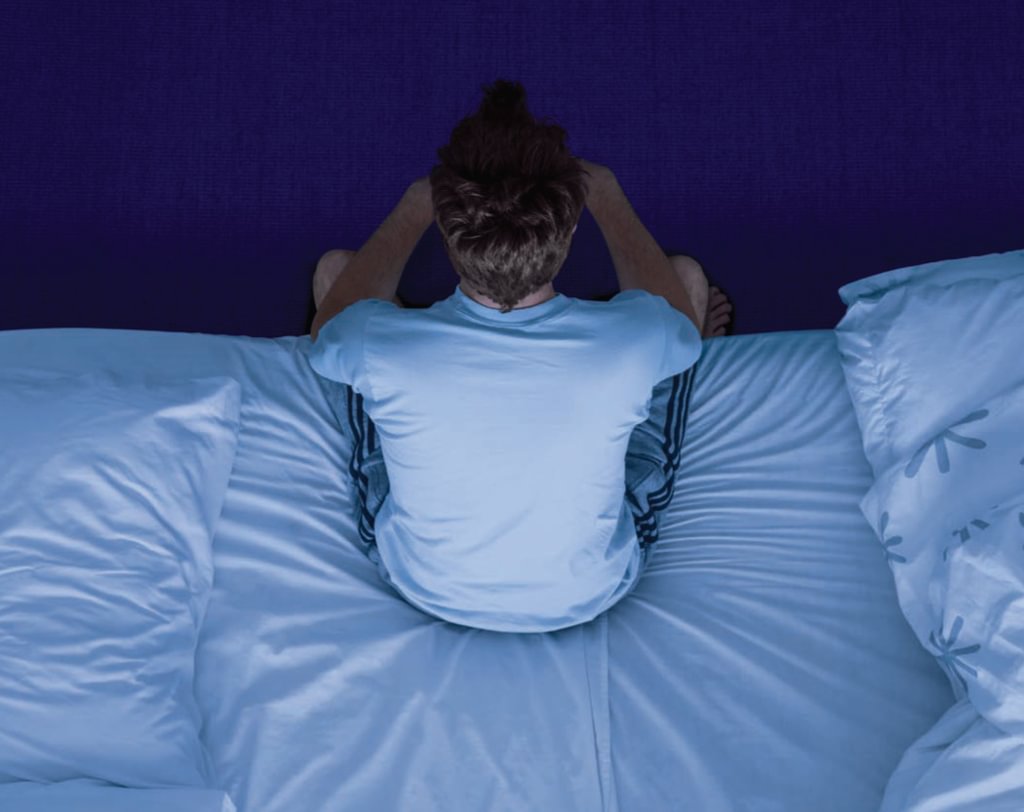 THE EXPLOSION of the Challenger space shuttle. The Exxon Valdez oil spill. A warship collision in 2017 that claimed the lives of seven sailors. Implicated in all these incidents? A lack of sleep.

Fatigue wreaks more havoc in our lives than we realize, says Daniel Buysse, M.D., UPMC professor of sleep medicine and psychiatry at the University of Pittsburgh School of Medicine.

Research suggests, for example, that if you sleep poorly, you’re 60 percent more likely to be injured on the job than colleagues who sleep well. And drowsy drivers cause about 10 percent of car wrecks, according to a 2018 report from the American Automobile Association Foundation for Traffic Safety.

Sleeplessness has become an American epidemic. Eighty percent of U.S. adults say that they have trouble sleeping at least one night a week, according to a new nationally representative Consumer Reports survey of 1,767 people. Four out of 10 toss and turn most nights.

Our survey found that sleeplessness affects people of all ages. The top complaint among millennials is falling asleep, while baby boomers are vexed more by waking during the night.

“How long we sleep affects our hormones that regulate appetite, immune function, and the neural circuits in the brain that govern our ability to think and how we feel,” Buysse says. It increases the risk of diabetes, high blood pressure, obesity, and heart disease. “How you sleep affects literally everything.”

AMONG ALL U.S. ADULTS:

80% SAY THEY HAVE TROUBLE SLEEPING AT LEAST ONCE A WEEK.*

Our lack of sleep stems mainly from societal, not physical, problems, says Michael Sateia, M.D., professor emeritus of psychiatry at the Geisel School of Medicine at Dartmouth. “With the increasing demands of our occupations and family life and the incessant bombardment of media, we aren’t giving ourselves the opportunity for adequate sleep.”

If you toss and turn despite consistently allowing 7 or 8 hours in bed or if you feel tired during the day, consult a doctor. Common conditions such as anxiety, depression, an enlarged prostate, heartburn, and pain can keep you up.

Or you may need to adjust the type, timing, or dosage of a medication you take. Steroids, blood pressure drugs, and allergy and cold medications, for example, can act as stimulants and interfere with sleep.

If you share a bedroom, your partner can provide clues. Snoring and gasping for breath can indicate sleep apnea; excessive movement, restless legs syndrome. To investigate, your doctor may suggest an overnight test or refer you to a sleep specialist.

If those steps don’t help, the American Academy of Sleep Medicine (AASM) recommends cognitive behavioral therapy for insomnia (CBT-I)—a form of counseling that identifies and replaces thoughts and behaviors that contribute to poor sleep—as a first-line treatment.

“CBT-I is at least as effective as medications, the benefits are long-lasting, and it’s manifestly safer than any pill,” Sateia says. But few people have heard of it. “And even if they are aware of CBT-I, it can be hard to find a trained therapist,” he says. For advice, see “Finding a Sleep Therapist,” on the facing page.

The Problem With Pills

Nearly one-third of people who complained of sleep problems at least once a week said they had used an over-the-counter or prescription sleep drug in the past year.

But many of these people don’t get the rest they seek: About one-third reported very good or excellent sleep. And they often don’t wake refreshed: Nearly 60 percent of people taking sleep drugs reported feeling drowsy, confused, or forgetful the next day.

The evidence is strongest for prescription drugs, says Buysse, who along with Sateia and other researchers reviewed 129 studies of sleep drugs for the most recent treatment guidelines from the AASM. But the benefits are modest, increasing sleep time by about 20 to 30 minutes.

Most surprising: There’s little research into the effectiveness of some of the sleep aids Americans turn to most often, including the antidepressant trazodone (sold only as a generic) and over-the-counter products, so it’s hard to know whether they help. OTC drugs contain older antihistamines, such as diphenhydramine in Advil PM and doxylamine in Unisom Sleep Tabs, which can cause drowsiness as a side effect.

All sleep medications, including OTC versions, have side effects. Most commonly, that means making you feel drowsy, dizzy, less mentally sharp, or more physically unsteady the next day.

People have also reported experiencing hallucinations, having memory lapses, and performing activities such as driving or eating while asleep.

With most sleep drugs, long-term use can lead to dependence, and abruptly stopping the drugs can lead to a rebound effect, where insomnia gets worse. Taking too much, combining different types of sleep aids, or using them with other drugs or alcohol magnifies the risks.

Our survey also found that more than 1 out of 10 Americans who used prescription drugs for sleep took an opioid for that purpose. That’s particularly dangerous not just because opioids are addictive but also because they can slow your breathing and make it more shallow. So when combined with alcohol or other sedatives, which have the same effect, “you could stop breathing altogether,” Buysse says.

The survey also shows that people often ignore warnings not to take any sleep aids unless they can spend at least 7 hours in bed. “After 4 or 5 hours, you can still have the drug circulating in your blood, so you will be less alert at precisely the time you need to be doing things that require your concentration,” Buysse says.

The Science of Supplements

In CR’s survey, nearly 1 out of 5 people said that they took supplements to help them sleep. These included valerian, chamomile, and, especially, melatonin, a hormone that your brain secretes at night to signal to your body that it’s time to wind down.

While people in our survey reported fewer problems with sleep supplements than with drugs, these products still caused side effects: About a quarter of respondents said they were drowsy the next day, and 12 percent said they felt confused, distracted, or forgetful.

38% REPORTED SOME KIND OF MISUSE AT LEAST ONCE IN THE PAST YEAR.*

50% TOOK A SLEEPING DRUG WITHOUT ALLOWING FOR AT LEAST 7 HOURS OF SLEEP AT LEAST ONCE IN THE PAST YEAR.*

People taking supplements were also far less likely to say the products helped a lot than were those taking OTC or prescription drugs.

Still, melatonin may have limited but important uses for certain situations, says Alcibiades Rodriguez, M.D., the medical director of the Comprehensive Epilepsy Center—Sleep Center at New York University, especially for people older than 70, who tend to make less melatonin. It may also help people who need to fall asleep at a time that’s not in sync with their internal clock—shift workers, for example, or those suffering from jet lag.

There’s less evidence for other supplements or herbal sleep aids. A 2015 review of 14 studies found that people with insomnia who took the herbs valerian, chamomile, kava, and wuling didn’t sleep significantly longer or better than those who took a placebo.

Another sleep aid growing in popularity: CBD (cannabidiol), a compound extracted from cannabis plants, including marijuana and hemp. (CBD does not get you high.) In a separate nationally representative 2018 CR survey, of more than 2,000 people, 10 percent of people who had tried CBD said they used it to improve sleep, and a majority of these people said it helped.

Limited research in humans suggests that CBD may ease anxiety, and improve sleep in people with chronic pain. But there is still no clear medical evidence that CBD helps with insomnia. For more on CBD, see page 42.

Why a Nightcap Is a No-No

About as many Americans drink alcohol to help them sleep as take supplements, according to CR’s survey. Alcohol does make some people feel sleepy, “but it disrupts sleep later on,” says Jennifer Martin, Ph.D., associate professor of medicine at UCLA.

For example, alcohol can interfere with chemicals in your brain that govern waking and sleeping, could worsen apnea and snoring, or may make you need to get up to go to the bathroom.

And consistently getting disrupted sleep can worsen a sleep disorder. In some cases, this sets up a destructive loop, in which people drink more to try to sleep through the night, not realizing that worsens the problem.

A Safer Path to Sleep

Make sure you’re not sabotaging your shut-eye by, for example, drinking caffeine late in the day, exposing yourself to bright lights near bedtime, or taking a smartphone to bed.

If you can’t solve the problem on your own, talk to your doctor before dosing yourself with OTC sleep aids. In general, drugs should be reserved for short-term insomnia, such as that caused by jet lag or anxiety.

For sleeplessness lasting more than a few weeks, look for a physician certified in sleep medicine or ask your doctor about CBT-I (see below). Some people with severe sleep problems may benefit from taking a prescription sleep aid along with CBT-I, tapering off as the therapy takes effect.

But long-term use is typically not recommended. The drugs may become less effective over time, and in some cases people become hooked and can’t stop. “Very few people need sleep drugs long-term,” Sateia says. “And in those cases patients should be monitored carefully to make sure that the drugs are still effective and that they are not developing a dependency.”

For more on sleep drugs, go to CR.org/sleepdrugs0319.