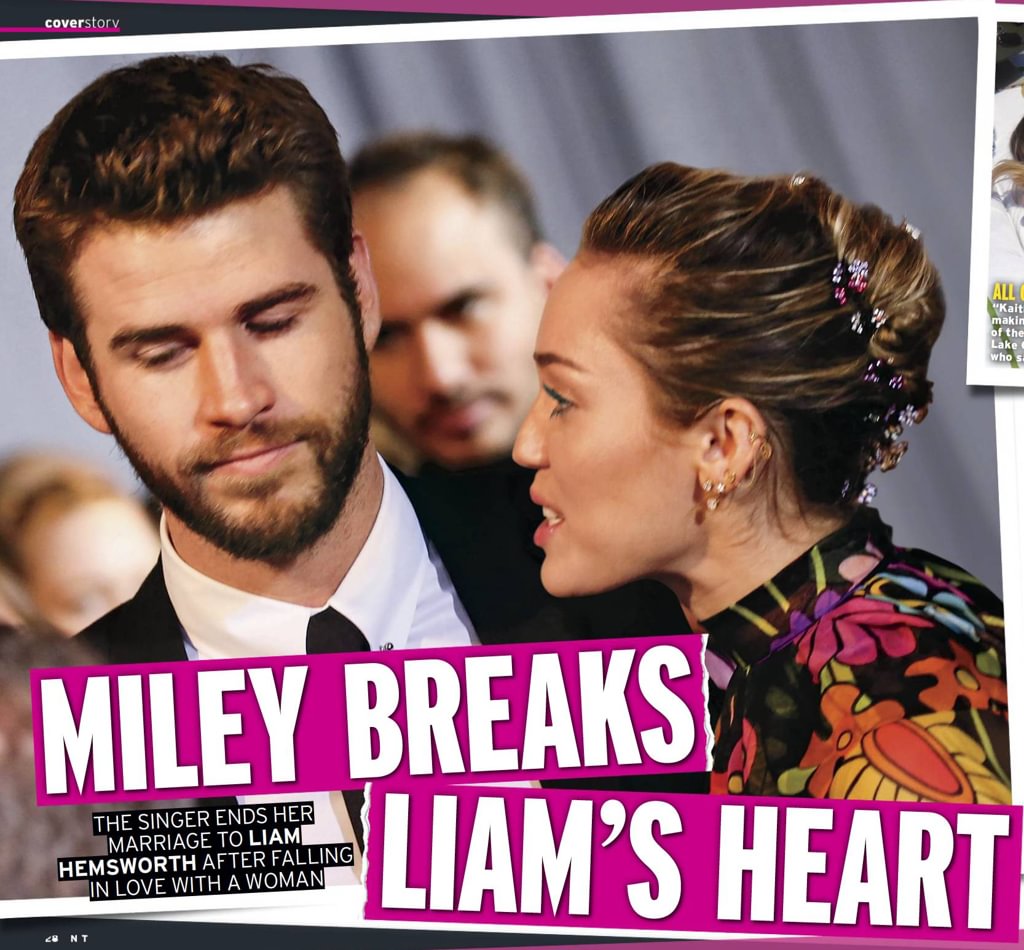 WARNING SIGNS “Ever since the wedding, things have gotten more tense between Liam and Miley,” says a source.

The marriage only lasted 230 days. On Aug. 10, a rep for Miley Cyrus announced the pop star and Liam Hemsworth “have agreed to separate at this time. Ever-evolving, changing as partners and individuals, they have decided this is what’s best while they both focus on themselves and careers. They still remain dedicated parents to all of their animals they share while lovingly taking this time apart.” 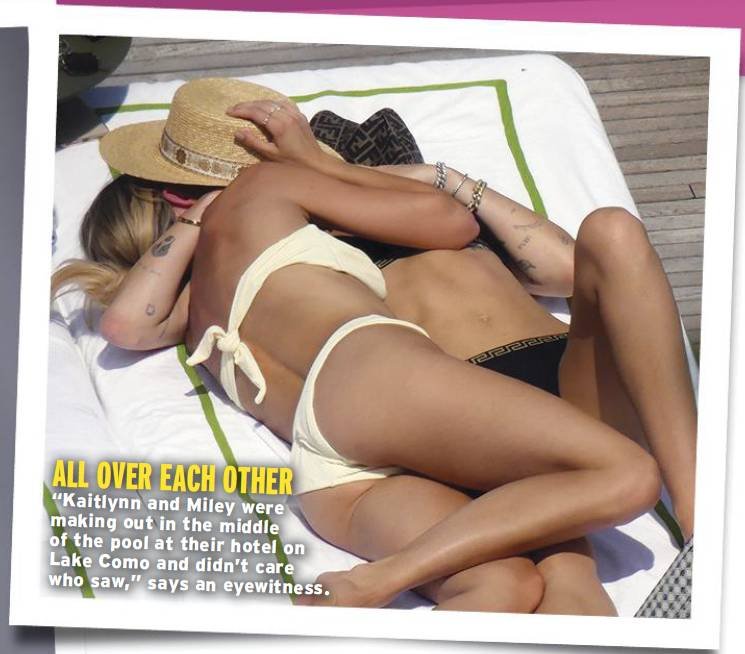 ALL OVER EACH OTHER “Kaitlynn and Miley were making out in the middle of the pool at their hotel on Lake Como and didn’t care who saw,” says an eyewitness.

But there’s far more to this breakup story. Just hours before the bombshell split confirmation made headlines, a bikini-clad Miley, 26, was photographed at the Il Sereno hotel on Italy’s Lake Como kissing a woman — newly single Kaitlynn Carter, 30, who a week earlier announced she and The Hills: New Beginnings star Brody Jenner, 35, had decided to “amicably separate” just a year after their Indonesia wedding. In Touch can confirm Miley and Kaitlynn are a couple — and that Miley dumped Liam for her. “Miley made the decision she felt was right; that’s what she’s telling people,” says an insider. “There’s no going back now, not that Liam would ever take her back after this. She broke his heart.”

Just six months ago, the Australian actor, 29, was giddy about married life. “It’s the best. It’s the best,” he gushed of making things legal with his “sweet, sweet angel” of a wife. “I feel so lucky to be with someone like her.” But behind the scenes, the marriage was suffering. “He always knew Miley liked women too, and an open marriage was on the table when they got married,” says the insider. “He knew what he was signing up for, but refused to make it work, and she felt betrayed.”

According to Miley’s side of the story, there were other reasons she left, says a source close to the pop star. “She recently made a comment that Liam probably wants her to get fat and stay home and not work. Meanwhile, she is skinnier than ever. She also made a comment about people thinking she is boring now that she’s married. It’s so far from the truth, but I think that’s really how she thinks. She is probably more concerned about her career than Liam. She’s selfish like that. She probably thinks she was at her peak when she was ‘edgy’ and Liam is making her boring.”

Even knowing all he knew, sources say Liam was devastated when Miley told him it was over, and after calling her father, Billy Ray, in a fury, says the insider, he retreated to his native Australia to be with his brother, Thor actor Chris Hems-worth. Miley, meanwhile, acted like she didn’t have a care in the world. She and Kaitlynn shamelessly cavorted across Europe not only making out but posting sexy swimsuit snapshots and videos of themselves dancing and singing while wearing next to nothing.

The day after the breakup announcement, Miley also shared a pointed post that included sentiments like “Don’t fight evolution, because you will never win” and “change is inevitable.” Liam, a source close to the actor tells In Touch, “is stunned by Miley’s behavior in Italy. His family cannot believe Miley is flaunting this for the whole world to see. They think she’s a disgrace.”

Despite the shocking circumstances of the split, the truth is, multiple sources tell In Touch, tensions had been building for months. A source told In Touch just in July that Liam’s long been “annoyed” by Miley’s lust for attention and wild antics when they’re in public and that he’s never liked it when she shares intimate details about their romance in interviews. (In early July, Miley — who identifies as pansexual — unapologetically confessed to Elle that she was still turned on by people outside her marriage: “I’m in a hetero relationship, but I still am very sexually attracted to women. People become vegetarian for health reasons, but bacon is still f---ing good and I know that.”)

If and when to start a family had also become an issue, according to sources. “Liam wanted babies, and Miley didn’t anymore,” claims the source with ties to the former couple. (Talk about different outlooks: In May, Liam told GQ Australia that kids were in the cards “one day” and quipped he wanted “10, 15, maybe 20” with the singer, who just weeks later told Elle she did not “want to reproduce” because she knows the earth “can’t handle it.”)

Kaitlynn clinched the split. Liam and Brody have been friends for years (see box at right), and that’s how Miley met Kaitlynn, notes the second insider. (Kaitlynn is also friends with Miley’s sister Brandi.) “She knew Miley likes women, so when her own marriage was falling apart, she’d turn up the charm. Miley would light up when she was with Kaitlynn, and one thing led to another. Miley asked Kaitlynn to join her on this trip and paid for it — she wanted Kaitlynn to just sit back and relax and said she would take care of everything.”

But in the weeks leading up to their Italian getaway, “Miley and Kaitlynn were spending lots and lots of time together,” says another source. “Miley will go to Kaitlynn’s house [in West Hollywood, where she’s been living since her split from Brody] late at night — dropped off in an SUV — and spend hours there. Everyone suspected they were hooking up.”

The Italy vacation isn’t their first trip together either, adds a U.K. insider. “Miley and Kaitlynn were in England earlier in the summer. Kaitlynn was behind the scenes when Miley was performing at the Glastonbury music festival at the end of June, but kept a low profile. There was a lot of flirting going on that didn’t go unnoticed.”

Though Miley and Liam certainly loved each other, some of the red flags concerning their marriage now seem tough to ignore. Both have admitted they exchanged vows at Miley’s Tennessee home in December in large part because they’d struggled with the devastating loss of their Malibu home in the Woolsey Fire last November (see above). The wedding, Liam said in May, “was something really good coming out of a horrible situation. It was going to happen eventually, but I think this just sped it up a little bit.” According to Miley, “I’m not sure without losing Malibu, we would’ve been ready to take this step or ever even gotten married.”

Miley also raised eyebrows this summer when she shared some loaded lyrics to the song “Never Be Me” off her upcoming seventh studio album: “If you’re looking for faithful, that’ll never be me / If you’re looking for stable, that’ll never be me / If you’re looking for someone that’ll be all that you need, that’s never going to be me.” Liam had to find that out the hard way, says the insider, adding that this divorce “could get very interesting. I don’t think they have a prenup, and Miley is worth something like $250 million. Liam doesn’t come close to that. He’s so hurt, I wouldn’t be surprised if he goes after a chunk of her fortune.” ■