In the biodiverse Omo River Valley, in the southwest of Ethiopia, a Kara man collects blooms of desert rose. (PHOTO: FAUSTO PODAVINI)

AT THE END OF A LONG DAY, we walked up to the village of Korcho. Tropical boubou birds were singing their duets on the edge of a lake. Circular huts, made of sticks and crowned with grass roofs, lay scattered along a ridge. Boys were herding cattle toward the family stockades for the night.

Korcho is a village of the Kara people, one of the 16 ethnic groups said to inhabit Ethiopia’s Omo-Turkana Basin. Ethiopia may be known for its rich and varied mix of ethnicities, but the diversity in the lower Omo River Valley in the southwest of the country, home to more than 200,000 people, is unparalleled.

One of the cradles of humankind, the valley was declared a World Heritage site by UNESCO in 1980. Ancient stone tools unearthed there “offer evidence of the earliest known technical activities of prehistoric beings,” the UNESCO citation reads. The discovery of several hominid fossils has provided vital keys to an understanding of human evolution.

Such has been the isolation of these peoples that until fairly recently few had even heard of the nation of which they were a part. For them, the capital of Addis Ababa might have been another world. To outsiders, the valley appears little compromised by the trappings of modernity.

But inevitably the modern world has edged in. The Ethiopian government is creating a cascade of five dams on the upper Omo, a mighty river that winds for 500 miles through the central highlands and empties on the border with Kenya into Lake Turkana, the world’s largest desert lake.

The Gibe III dam in particular, opened in 2015, has already had a profound effect on the hydrology of the lower Omo, disrupting the annual floods that support cultivation and pasturage and under-mining a way of life that has flourished here for many centuries. Power lines now stretch across green hill-sides flanking the dam reservoir. Some communities are being resettled.

I had come to the Omo from Addis Ababa, driving for three days across the agrarian landscapes of the Ethiopian highlands on roads where most of the traffic was pedestrian. Young men strolled arm in arm while women staggered in their wake beneath heavy sacks. A few horsemen passed. A white-robed priest appeared beneath a splendid parasol.

Ethiopia strains the imagination. The presence of what is believed to be the Ark of the Covenant, housed in an unassuming chapel in the northern town of Aksum, offers a hint of what this world of cloud-high plateaus and plunging gorges, of peaks and blistering salt deserts, of monasteries and castles, would reveal to me.

To ancient Egyptians, Ethiopia was the Land of Punt, a mysterious world where the Nile River flowed from fountains. Medieval Europeans believed it was a place inhabited by unicorns and flying dragons, birthplace of Prester John, keeper of the Fountain of Youth, protector of the Holy Grail, and a supposed descendant of one of the three magi.

Thanks to a remarkably inhospitable geography—Ethiopia is where Africa’s Great Rift Valley gets its start—isolation was total. “The Ethiopians slept near a thousand years,” wrote historian Edward Gibbon in 1837, “forgetful of the world, by whom they were forgotten.”

But increasingly travelers are beginning to find this storied realm. On the third day of my slow-paced journey, somewhere beyond Jimma, fields and villages fell away as we dropped out of the highlands. Views lengthened as the landscape unfolded toward distant escarpments. This was an emptier Africa of savanna and acacia.

Some hours later I was ensconced in the sylvan setting of Lale’s Camp, a canvas-tented complex in the shade of wild figs on the east bank of the Omo. A collaboration between local Kara and sustainable travel outfitter Wild Expeditions, the camp is part of a strategy to mitigate the disruptions caused by the dams as well as an attempt to develop a tourism model that extends the economic benefits of travel to host communities.

SUCH HAS BEEN THE ISOLATION OF THESE PEOPLES THAT UNTIL FAIRLY RECENTLY FEW HAD EVEN HEARD OF THE NATION OF WHICH THEY WERE A PART.

The project provides revenue and employment for the Kara. Funds have been directed toward solar-powered irrigation systems that will allow, in the wake of the disruption of the dams, the continued cultivation of sorghum on the riverbanks, in addition to fruits, vegetables, and herbs that can be sold to the camp kitchens.

Travel from the camp is often by boat, making for less intrusive arrivals in remote communities. One morning we made our way downriver into the channels of the delta. Colobus monkeys quarreled in the forests that lined the banks. Children splashed distressingly close to basking crocodiles. A group of teenage boys peered through the trees.

Some 50 years ago, not far from Lale’s Camp, remnants of one of the earliest examples of Homo sapiens were found. The area’s frequent volcanic eruptions over millennia created layers of debris and soil, which have helped scientists date the hominid and animal fossil fragments preserved in each layer. Almost 200,000 years old, the finds revealed the Omo valley to be one of the first landscapes to be inhabited by our human ancestors.

It is a landscape now changing but ever nurturing, teaching, remembering. j

Stanley Stewart’s award-winning books explore topics ranging from the sources of the Nile to the steppes of Mongolia. He divides his time between Rome, Italy, and Dorset, England. 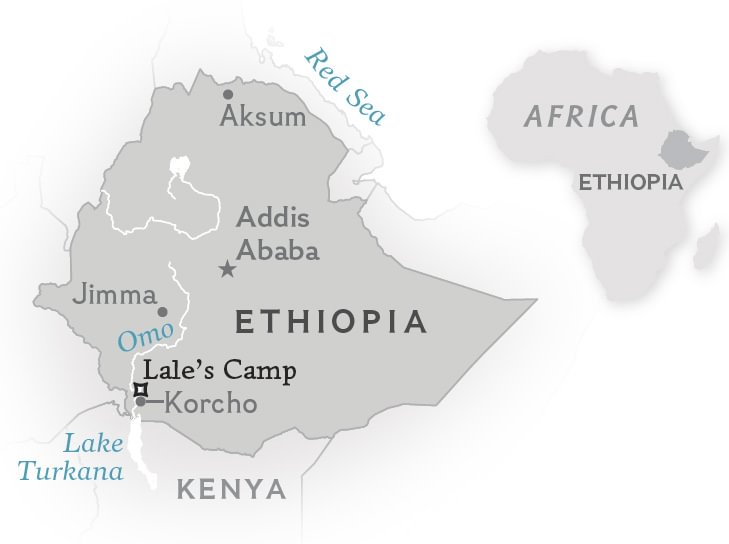 Ethiopia—home to some of the earliest humans—was the starting point of National Geographic Fellow Paul Salopek’s Out of Eden Walk, a multiyear, 21,000-mile storytelling odyssey tracing humankind’s footsteps out of Africa. Follow his journey at natgeo.com. ■