DEPARTMENTS
/ SCORECARD
HOME GAMES
THEIR SEASON DELAYED, MAJOR LEAGUERS ARE LEARNING TO COPE WITH BEING IN THE HOUSE MORE. AND SO ARE THEIR WIVES
BY STEPHANIE APSTEIN
ILLUSTRATION BY MICHAEL BYERS ASTRICT QUARANTINE is a good way to learn about your partner, and what Sara Hudson has learned is that her husband, Daniel, the Nationals’ closer, does not know how to use a Lysol wipe.

“You have to do it for a good 20 seconds for it to work!” Sara says. Daniel tends to give the contents of a grocery bag one pass and then put them away. She laughs and says, “I’m just like, ‘I’ll do it.’]”

As the coronavirus pandemic has spread across the globe, and the MLB season has been suspended, players are home, waiting out this uneasy period like the rest of us. They are frightened and unsettled. They are struggling to establish some sense of normalcy during the least normal stage of their lives. Some of them are also driving their wives crazy.

It’s a small aggravation, nothing compared with the real devastation that the virus has caused. Ali Mahtook tries to find the humor in it. Her husband, Mikie, is a Phillies outfielder. Like most players, he’s used to having his schedule designed for him. After he spends the morning exercising, he turns to Ali. “We were laughing the other morning,” she says. “I was doing work [as a liquor rep] and he was like, ‘I’m bored! I don’t know what to do!’” They got married in January, so she usually hands him a stack of cards and tells him to work on the thank-you notes.

Others, such as Rockies first baseman Daniel Murphy, are eager to contribute to the household. How’s he doing?

“Daniel is a very good baseball player,” Tori Murphy says. He recently volunteered to go grocery shopping, returning with an air of pride and a three-pound brick of butter. “I was like, ‘Where did you find that?’” Tori says. “We have to hack at it with a straight-up butcher knife.” Daniel has since been given his unconditional release from making trips to the store. Tori filled his roster spot with Instacart.

Caitlin Hill can barely even discuss grocery shopping, because it reminds her of better times, before she and her husband, Twins lefty Rich, were trapped in their Milton, Mass., house with their eight-year-old son, Brice. “I used to be able to say, ‘Go to Costco!’” Caitlin laments. “If [Rich] was on my nerves, I’d say, ‘O.K., go to Costco and get all these things I don’t need,’ and that would entertain him. Now I can’t.” She pauses to reminisce. Usually she would ask him to buy staples, but he would often fall under the Costco spell. “He’d come home with a pallet of pineapples,” Caitlin says. “We had a watermelon once that we named, it was so big. We never cut it up. We called it Waldo.”

Instead of making, ahem, fruitless trips to the store, ballplayers are forced to reckon with an unfamiliar existence. After a few days of nonstop wrangling their six-year-old, four-year-old and two-year-old, Daniel Murphy told Tori, “I’d rather face Clayton Kershaw every day.”

To do that, he’d have to go to Kershaw’s home gym. It was designed to match the one at Dodger Stadium, and he spends three hours there each morning. Much to wife Ellen’s relief, he has not yet conscripted her as a training partner. Every day for a week, Taylor Poppen played long toss with her husband, Sean, who is trying to crack the Twins’ rotation. Caroline Means, who played goalie for three years in the NWSL, serves as catcher for her husband, Orioles lefty John. McKenzie Marcinek climbs on the back of her fiancé, Dodgers righty Walker Buehler, while he does squats.

The spouses also serve as therapists. Taylor and Sean Poppen are in Atlanta. They live in a townhome without a yard or weights. They watch on Instagram as veterans work out in their home gyms, and Taylor reassures Sean that his talent will prevail. In the meantime he does kettlebell swings. Their six-month-old, Brady, is the kettlebell. “He’s, like, 24 pounds,” says Taylor. “We have a pork chop.” 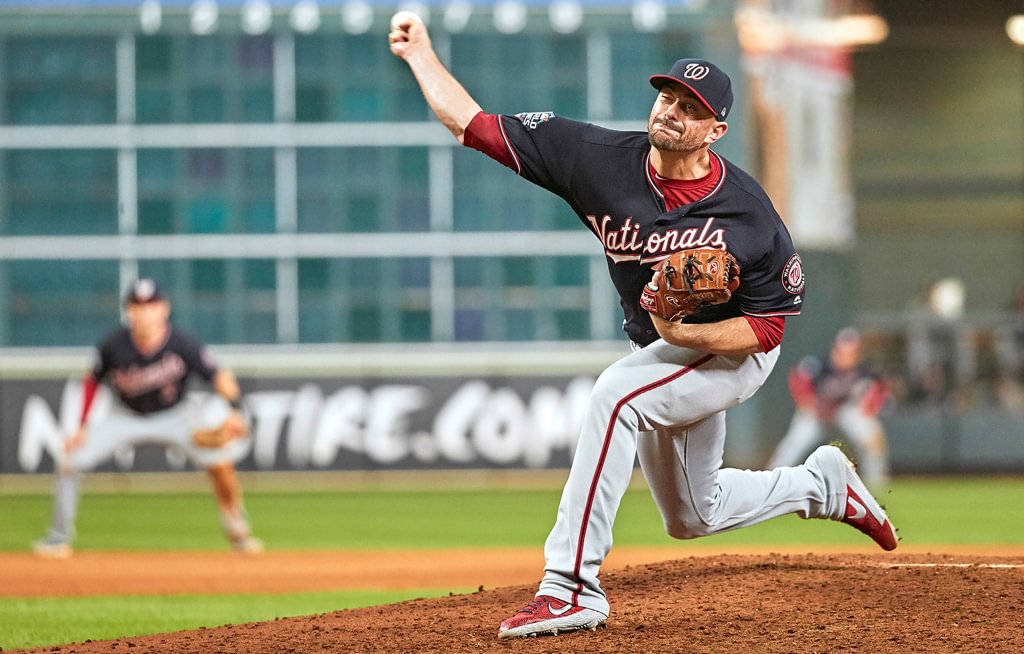 Hudson has gone from throwing to a catcher in front of thousands of fans to playing catch with himself.

Recently, Sara Hudson felt Daniel’s mood dipping. There are plenty of people in Phoenix who would be happy to play catch with a World Series champ, but he’s afraid to share a ball. So he stands alone in a grassy area near their house, hurling baseballs through the air. Then he walks to where they have landed and throws them back. Sara cued up Game 7 of the World Series. “Hold onto that feeling a little while longer,” she told him.

These complaints come with a wink and a laugh; everyone knows how fortunate they are. Kourtney Turner says, “I think you’d be hard-pressed to find someone who feels bad for a baseball couple right now.” She and her husband, Dodgers All-Star third baseman Justin, spend most days on the phone for their Justin Turner Foundation, which has paid L.A. restaurants, also under stress right now, to cater meals for pickup for kids who lost access to school meals.

But there have been real emotional costs. Buehler had intended to propose to Marcinek in Palm Springs on the way from spring training to Opening Day. Instead they drove home to Kentucky. He got down on one knee in the bedroom closet. They celebrated with friends and family over FaceTime.

Mostly, couples try to maintain some sense of normalcy—and try not to strangle one another. “The wine’s open by 5,” says Sara Hudson. The Poppens work on their separate hobbies (calligraphy for Taylor, coding for Sean) to give each other a break.

Eireann Dolan and her husband, Nationals reliever Sean Doolittle, have no such luxury. They booked a 300-square-foot room in a West Palm Beach Homewood Suites for spring training and decided to stay there rather than go home to Chicago. Then the baseball facility was converted into a COVID-19 testing facility. Now they walk their two dogs so often that the poor creatures all but cower when the leashes come out. Sean recently had to carry their 50-pound mixed breed half a mile after she gave up.

Still, there are small moments of beauty, especially for the fathers. Being on the road, players can feel removed from the grind of parenting; if you see your kids for only a few hours a day, a few days a week, do you want to spend that time disciplining them? But now they are there for everything. Rich Hill has begun to enforce bedtime. Heather Zimmerman is pregnant; her husband, Nationals first baseman Ryan, has begun to learn what to make their two daughters for lunch. Last month Ascher Blevins learned to roll over. A few weeks later, when the Giants were supposed to be on a road trip, he began crawling. His dad, Jerry, a reliever, would have missed that.

Dolan does not see how MLB can possibly return in 2020. There are too many people, too many possible chances for infection. “Short of imprisoning them in a stadium …” she starts. A commotion in the background interrupts her. Doolittle has been listening in—it’s hard not to, from a few feet away—and has something to add. “Tell her we want to play!” he insists.