FEATURES
/ A WORLD ON HOLD
UNTOLD TALES
OUR MARCH WASN’T MAD. OUR OPENING DAY STAYED CLOSED. THE CORONAVIRUS OUTBREAK ROBBED FANS OF WHAT WOULD HAVE BEEN MANY TRULY MEMORABLE MOMENTS, SO ALLOW US TO PRESENT SOME OF THE COMPETITORS WHO WERE DENIED THEIR TIME IN THE SPOTLIGHT—AND, IN THE CASE OF VINCE CARTER, A FITTING FAREWELL
ILLUSTRATION BY THE SPORTING PRESS
—Chris Mannix HE DESERVED BETTER — DIDN’ THE?

AFTER AN NBA-RECORD 22 SEASONS, MORE THAN 25,000 POINTS, A CAREER THAT TOUCHED FOUR DECADES, VINCE CARTER DESERVED BETTER THAN TO SEE IT END IN FRONT OF A SMATTERING OF FANS IN A MEANINGLESS REGULAR SEASON GAME IN MARCH … DIDN’THE?

This was Vince Carter, the eight-time All-Star, the pioneer of the forearm dunk, the man who made hoops cool in Canada. He deserved better than a hastily arranged uncontested three-pointer in the closing seconds of a defeat in a uniform few will remember him in … didn’t he?

He deserved a fitting send-off—a highlight montage, a chance to address the crowd, a prolonged standing O, maybe a rocking chair—before his final game, which was to be in Atlanta on April 15. And it’s not just the fans who missed out on a chance to honor a man who has influenced a generation of players. When Trae Young was struggling last year as a rookie, it was Carter, whose locker was next to his on the road, who provided guidance. “He was always there to talk to and let me know to be patient and trust the work I was putting in,” Young says. “He’s like a big brother.”

He deserved that one final trip to Toronto, originally scheduled for April 10, to properly exchange goodbyes with a city where he spent his first six and a half seasons. “That would have been nice,” Carter concedes. “But I promise you, I’m good with it.”

Vincefest is one of the many events that fans will be deprived of seeing—and one of the biggest stories we will be deprived of telling because of the COVID-19 pandemic. But Carter is at peace with the end, perhaps because it came long after he expected it to. Twenty-two seasons? The springy, 21-year-old, 6' 6" swingman from North Carolina who landed in Toronto in 1998–99 wanted a long career, not a record-breaking one, something similar to the runs childhood heroes Michael Jordan (15 seasons), Larry Bird (13) and Magic Johnson (13) put together. “I said if I can make it to 15 years, playing at least a year longer than some of the greatest of all time that played the game, I’m doing something,” says Carter. “I’ve accomplished something.”

A 15-year career would have ended in Dallas, in 2012–13. Carter wasn’t Carter with the Mavericks, but he was still pretty good. He averaged double digits. He connected on 40.6% of his threes. He picked up a couple of sixth man award votes, successfully transitioning to full-time reserve. He could have exited on top. But Carter wasn’t ready to quit. His body was strong. His desire to keep playing was even stronger. After ’13–14, he told himself: Two more years. He played 81 games that season; he tacked on 66 the year after. O.K., Carter said. Two more years. By 2017–18, Carter wondered, Am I staying too long? He called former Raptors teammate Tracy McGrady, who retired in 2013 after 16 seasons. When it’s time, McGrady told him, you will just know. After that, Carter stopped setting end dates.

Carter’s durability is as improbable as it is impressive. He went from picking up All-NBA honors in his second and third seasons to being dealt to the Nets for spare parts midway through his seventh. Knee and hamstring problems saw him branded as injury-prone, derided as soft. A five-point night against the Knicks meant that Carter (abruptly) ended his career in 19th place on the NBA’s all-time scoring list.

There are layers to Carter’s longevity. There is the physical, the ability to keep his body running at a level that allowed him to compete against players half his age, and there’s the mental aspect. “It’s just finding the motivation,” says Carter. “Some days I could walk by the weight room and just be like, ‘Eh, not today.’ In the evening, you kind of feel guilty about it. You tell yourself to get it in gear.”

As his athleticism faded, Carter learned not to rely on it. “The thing I understood was I was able to look in the mirror and say, ‘Hey, this Plan A isn’t going to work all the time. So make sure you have a Plan B to put the ball in the hole,’” says Carter. “Even at my peak of being superathletic, I still wanted to outsmart people. And I learned quickly playing against the Knicks, my first playoff run [a first-round sweep in 2000], it’s not about just being athletic. You have to learn how to outsmart teams.”

Make a list of former All-NBA players who made the transition to role players. There’s Carter and … well, not much else. There wasn’t an aha! moment, Carter says, no epiphany. Just a quiet under-standing that there was less value in starting games than there was in finishing them. To prepare, Carter studied Vinnie Johnson, a super sub for the Pistons in the 1980s, devouring hours of the Microwave’s highlights on YouTube. “As a starter, you can kind of work your way into the game,” says Carter. “As a reserve, you have to be ready to go as soon as you walk in. You look at the flow of the game, instead of trying to create the flow of the game.”

Carter declared his intention to retire last spring, yet in the early months of the season, he had doubts. Then, in December, a chance encounter with Bryant, in Brooklyn. The two former rivals embraced. Carter asked Bryant about retirement. Bryant told Carter it was the happiest he had ever been. A month later, Carter passed Nowitzki for third on the all-time games-played list. Nowitzki texted him and told him, on the subject of retirement, Man, you’re going to love it. “It was reassuring,” says Carter. “Comforting. Those are the guys that I wanted to talk to and hear from.” 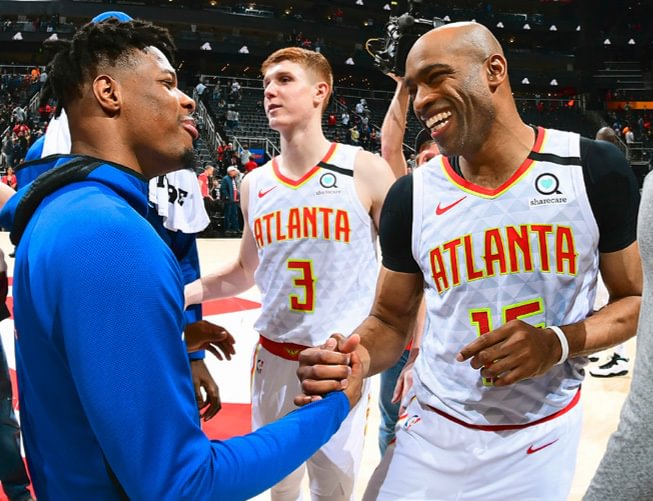 Which is why, for Carter, having his final NBA moment with the Hawks, against the Knicks in a half-empty State Farm Arena doesn’t feel like a letdown. Just before the third quarter, word filtered down to Atlanta’s bench. Something happened with the Jazz. Gobert, they think. In the fourth, the news broke: The NBA had suspended the season. In overtime, a “We want Vince” chant began in the stands. Says Carter, “I think they had a better understanding of what was going on than we did.”

Kobe Bryant spent 20 years with the Lakers, and Dirk Nowitzki 21 with the Mavs. Carter wore eight uniforms, though it’s the last few that were the most curious. In the twilight of his career he could have signed with a contender. Instead, he went to Sacramento and Atlanta, twice, trading a chance for a title for a chance to play. “I had some [contenders] that were offering the opportunities,” Carter says. “They were saying, ‘We can’t guarantee [minutes].’ And I don’t expect anyone to guarantee me

With 19.5 seconds left, Hawks coach Lloyd Pierce made eye contact with Carter. Carter looked away. “I didn’t want to go in,” he said. The chant continued. Pierce yelled for Carter. “That’s when it kind of hit me,” says Carter. He took a spot on the free throw line next to RJ Barrett, New York’s 19-year-old rookie guard. On Atlanta’s final possession Carter took a dribble handoff from Young and lined up a top-of-the-key three. In his 1,541st game, playing his 46,367th minute, Carter scored the last of his 25,728 points, knocking in his 2,290th three. As the NBA froze, a legend quietly said goodbye. Not ideal, maybe, but says Carter, “I ended on a pretty cool note.”