Essential Happiness, New Pleasures photomontage by Fernand Léger and Charlotte Perriand for the Agriculture Pavilion at the International Exhibition in Paris in 1937.

Great artistic strides have often accompanied the tumult of societal upheaval and the 1930s were no exception. A financial catastrophe of age-defining magnitude ignited a burgeoning of nationalistic sentiment, the terrifying rise of multiple populist cults of personality, the gradual erosion of international treaties and ultimately, a second world war. (Minus the war, this also sounds a lot like the past decade.)

This breakdown of events pushed the great creative minds of the day to reconsider what was at stake in their art and its importance in shaping a better world. Here in Australia, where the word ‘Arts’ was recently removed from the name of the government body meant to nurture its development, the issue seems especially poignant. So it’s to that great bastion of the arts — France — and again to the ’30s that we turn for insight and, in particular, to the interactions between architect Charlotte Perriand and painter Fernand Léger.

Think Charlotte Perriand and ‘collaboration’ and the mind immediately jumps to Le Corbusier and Pierre Jeanneret, both of whom Perriand worked with between 1927 and 1937, co-designing some of the most illustrious furniture pieces of the 20th century. Perriand’s Fauteuil pivotant designed for her place Saint-Sulpice apartment in Paris prior to joining Le Corbusier’s studio in 1927, speaks to her oft-overshadowed contribution. It’s next to impossible to imagine the design troika’s Fauteuil grand confort or even the Chaise Longue basculante, both 1928, without Perriand’s swivel chair as a precursor. More abstract was the architect’s relationship with Léger, although the recent exhibition Charlotte Perriand: Inventing a New World, at the Fondation Louis Vuitton in Paris, shed valuable light on the synergy between these two kindred spirits.

Perriand and Léger first met in 1930 during a reception at the German Embassy in Paris, on the occasion of the presentation of Bauhaus design pieces at the Musée des Arts Décoratifs. “Charlotte Perriand immediately felt that they would become friends,” explains Jacques Barsac, the architect’s son-in-law and co-curator of the exhibition at Fondation Louis Vuitton. “She shared a very strong artistic, intellectual and political connection with Fernand Léger. From 1932 onwards, they were neighbours in Montparnasse and the bond of friendship remained strong throughout their lives.”

For humanist artists, such as Perriand and Léger, the antidote to the accumulation of catastrophes — the Great Depression and the rise of totalitarianism in Spain, Italy, Germany and the Soviet Union — was nature and escaping to the great outdoors. Like the Surrealists before them, the pair drew endless inspiration from found objects, which Perriand would photograph and Léger would sketch. “We called it our ‘art brut’,” the architect explained in her 1998 autobiography, Charlotte Perriand: A Life of Creation. “Léger, Pierre [Jeanneret] and I used to go to the Normandy beaches… We would fill our backpacks with treasure: pebbles, bits of shoes, lumps of wood riddled with holes, horsehair brushes — all smoothed and ennobled by the sea.” As organic and irregular forms infiltrated Léger’s canvasses, the construction of Perriand’s furniture began to shift from metal ›› ‹‹ to wood, which was then more affordable but more importantly, spoke to her growing admiration for the natural world. Her photography from this period, mainly of found objects is both literal and highly poetic. “Fernand Léger was notably influenced by Charlotte Perriand’s photographic work,” says Barsac. “The first gallery in the exhibition showed how her photography around nature influenced the motifs in Léger’s paintings.” Alongside René Herbst and Louis Sognot at the 1935 Exposition Universalle in Brussels, Perriand presented the Maison du jeune homme, a cool and sporty studiolo for the young and modern man. She was quick to draw Léger into the escapade, who realised two works for the daring new space — a large sport-themed canvas for the gym zone and a fresco that formed a backdrop to a collection of natural found objects, that sat by a wall and desk, both in slate and designed by Perriand, on which the young man could use chalk to draw and formulate ideas. A revolving display exhibited her first political photomontage and a rustic armchair, handmade in wood and straw, indicated her departure from the sleek, machine-like furniture she had been known for. Both Léger and Perriand saw the arts as entirely allied and the Maison du jeune homme was a seminal attempt at their synthesis, uniting design with painting, architecture, urbanism, natural sculptures and photomontage.

Perriand and Léger came together again two years later in what was arguably their most ambitious joint work: the Ministry of Agriculture Pavilion at the Exposition Internationale des Arts et Techniques de la Vie Moderne in Paris in 1937. Set within an openwork star-shaped structure, Perriand created a series of 18 photomontage panels extolling the virtues of the Popular Front’s agricultural policy. Emblazoned with the magnificent painterly colours of Léger, the fresco-like cycle of imagery played on the interval between the real and the possible, and overcoming the present societal discord — the notion of revolution was still romantic in the 1930s — through the institution of agricultural and industrial policy conducted in the service of all citizens and not just the wealthy few. In Muralnomad: The Paradox of Wall Painting, Europe (1927-57), Romy Golan wrote that the photomontage “produced a rarity in Interwar France: a truly revolutionary élan.” In the piece, the head of a Gallic rooster and factory chimneys — symbols of agricultural and industrial France — were arranged incongruously alongside country fields rich in abundance, Breton women in traditional dress, the Eiffel Tower and even a saxophonist, in an all-encompassing, highly stylised and manifesto-like composition. While this might all sound a little too ‘Soviet’, keep in mind that in Perriand and Léger’s artistic embrace the work affirms the importance of fulfilment: humans are not cogs in the machine, rather individuals who not only interact with other humans but also with other kingdoms, most importantly that of nature.

Both Léger and Perriand saw the arts as entirely allied and the Maison du jeune homme was a seminal attempt at their synthesis, uniting design with painting, architecture, urbanism, natural sculptures and photomontage 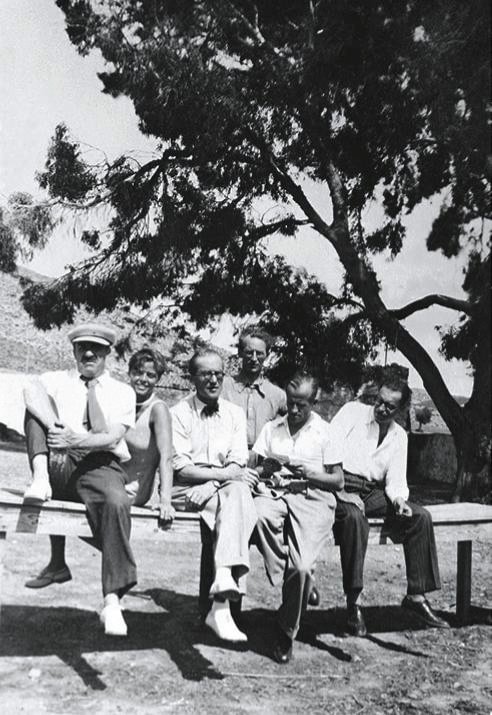