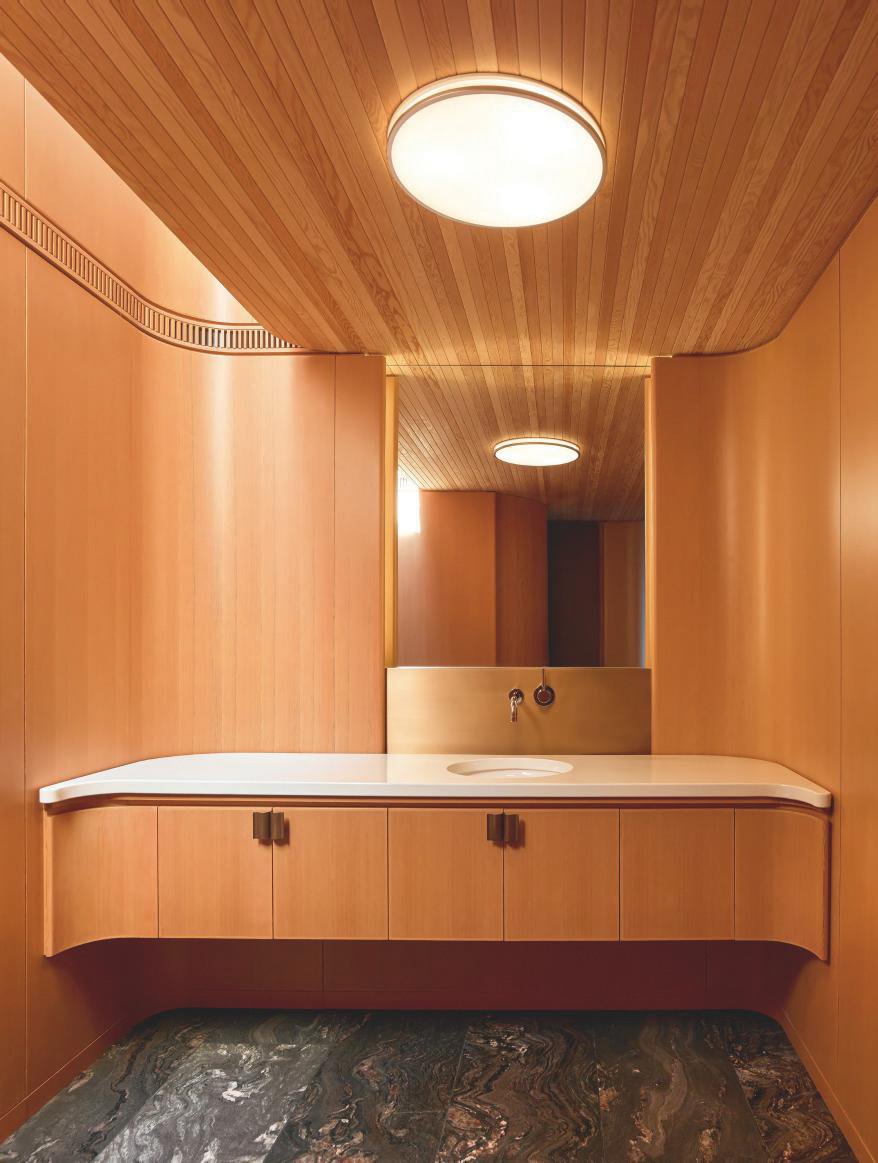 the Douglas fir-lined powder room with a Canadian granite floor. Shim-Sutcliffe designed the built-in pieces and the fittings throughout the house looking through to the living room, with a lake view and Alvar Aalto furnishings, material detail includes more Douglas fir, a board-formed concrete column, and Canadian granite and concrete floors 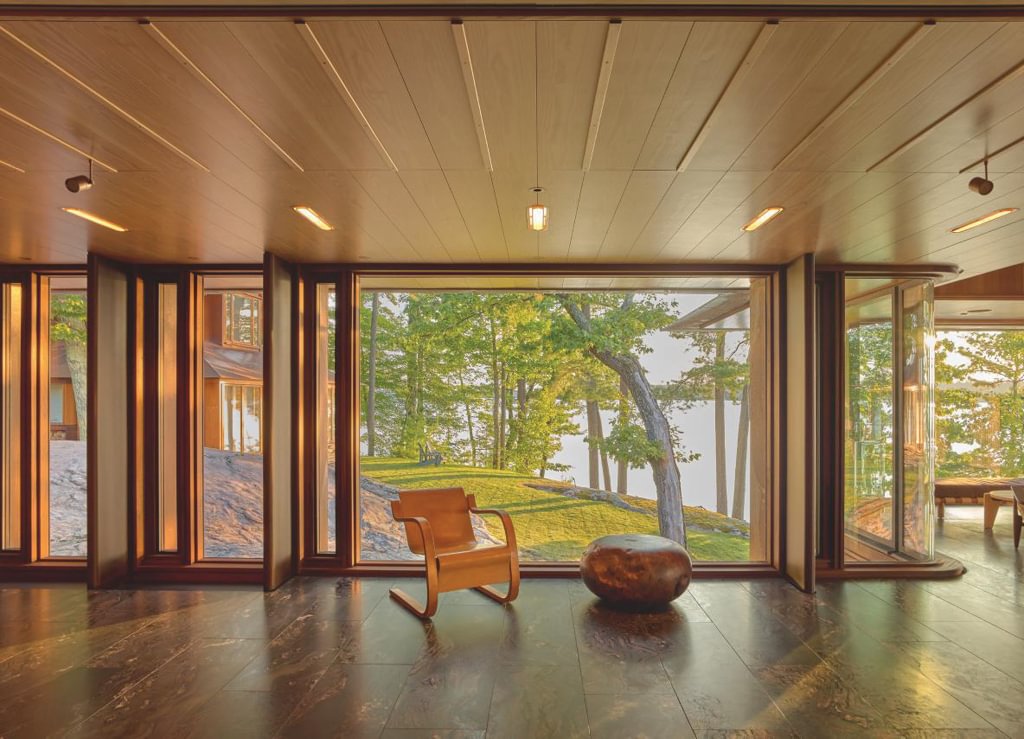 An Alvar Aalto chair in the entry porch, where weathering steel fins contrast with the timber and granite surfaces, and the windows look out to a granite outcrop and the lake

The Toronto-based partnership of Brigitte Shim and Howard Sutcliffe had been in practice together for three years when, in 1997, a local businessman and his wife called, inviting the architects to masterplan their five-acre plot on Point William, a spur of forested land jutting into Lake Muskoka. More than two decades later, the weekend retreat and family compound, a two-hour drive north of Toronto, continues to grow and evolve.

The programme developed as clients and architects considered alternative options. Shim-Sutcliffe reconstructed a decrepit boat shelter (1997-1999) and a guest cottage (2007- 2010), before turning its attention to the main house – a sprawling, ramshackle structure that blocked views of the water and was widely regarded as the ugliest on the lake. The architects had earlier secured planning approval for a new house of a similar footprint but set back from the water and, on the landward side, from a massive dome of granite scoured by retreating glaciers at the end of the last Ice Age. The rock, now fully revealed, separates the house from the guest cottage, and becomes a symbolic anchor for the entire compound. As Shim explains, ‘Our episodic journey reimagining Point William has revealed to us that the open spaces we created between buildings are as important as the design of the buildings themselves. One responds to the next and our landscaping stitches the whole thing together.’

The architects’ scheme unfolds cinematically, as a succession of vistas. The gravelled drive bends around a meadow, revealing flashes of light off the water, and the boat house at the foot of a slope. Logs are stacked against the walls of the guest cottage and newly reconstructed garage, with their pitched, rusted steel roofs. The house is clad in rough-hewn blocks of local stone, self-rusting steel and ipe wood – materials that require no maintenance and are already beginning to weather. They sandwich a band of glass, shaded by irregularly spaced mullions, and this horizontal layering of materials breaks up the mass of the 6,500-sq ft house. A bowed hood rises from the green roof to pull in light from the lake, and a linear skylight illuminates the staircase descending to the lower-level guest rooms. Terraces take up the north and east corners of the building.

Though the ground-hugging house is a perfect foil for the steep-roofed guest cottage and the towering white pines, the architects conceived it from the inside out. ‘There’s a strong sense of axiality,’ says Sutcliffe. ‘Different scales of design are juxtaposed and syncopated, with soaring gathering spaces flowing out of intimate areas.’ The clients’ grown children built their own family lodge at the base of the peninsula, so the new house was to serve as a getaway for a couple of empty nesters who love to entertain but wanted the same feeling of intimacy as when they stayed in the upstairs apartment of the new boat house. Point William has captured their imagination, and they drive up here more often than they first intended 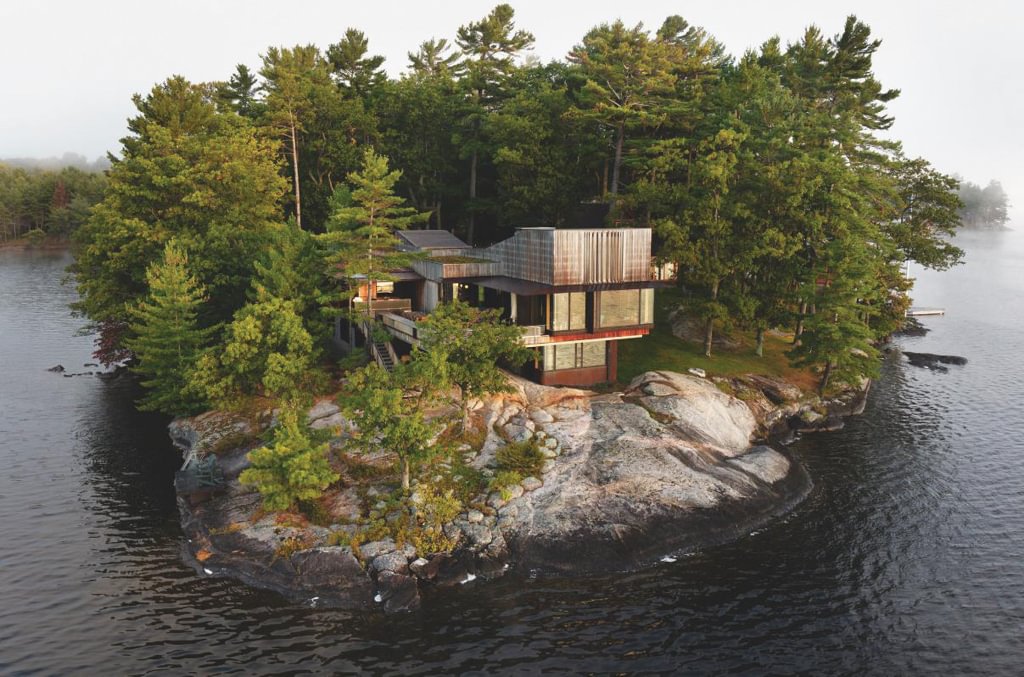 The house, with its ipe-wood cladding and bronze-framed windows, seems almost embedded at the tip of a peninsula on Lake Muskoka, part of a geological area known as the Canadian Shield

A feeling of tactility enhances the spatial drama of the interior, with its snug bedrooms, expansive kitchen and lofty living spaces. Everything you touch, from the rounded corners to the bronze door handles and sculpted balustrade, imparts a sense of delight to hand and eye. Shim-Sutcliffe has brought rusted steel inside, but with the texture of smooth leather. Boldly grained Douglas fir clads the ceiling; straight-grained fir is employed for panelling and cabinetry. The same granite, quarried in Quebec, reveals a watery pattern on the floor and turns soft grey when flamed for the hearths. Natural light washes some surfaces, reflects off others, highlighting details and constantly changing. ‘The pleasure of making things permeates everything we do,’ says Shim. ‘We designed all the built-ins, fittings and some new furnishings to complement the clients’ rustic and vintage modern pieces.’ From site-responsive architecture to 3D-printed lamps, Point William is a total work of art. shim-sutcliffe.com 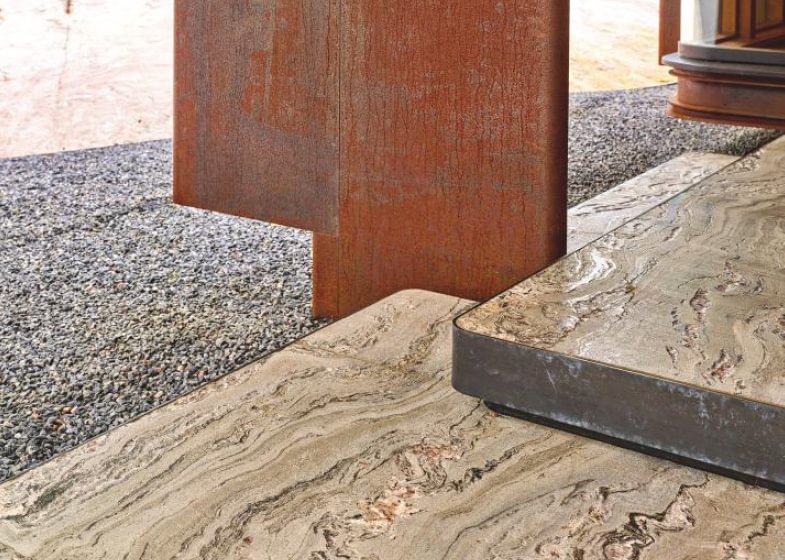 Textural juxtaposition at the entrance to the house, with granite slab steps wrapped in bronze, weathering steel fins, and granite gravel on the drive
■